This website requires certain cookies to work and uses other cookies to help you have the best experience. By visiting this website, certain cookies have already been set, which you may delete and block. By closing this message or continuing to use our site, you agree to the use of cookies. Visit our updated privacy and cookie policy to learn more.
Home » Northern Water Chosen as Colorado/Wyoming/Dakotas Owner of the Year
Mountain StatesMountain States Construction Companies

Northern Water is building the Chimney Hollow Reservoir and planning two others as well as investing $100 million in new offices.

After two decades of pushing paper, Jeff Drager says he is finally getting down to some serious engineering work on the coming 350-ft-high Chimney Hollow Dam and its accompanying 90,000-acre-ft reservoir in Northern Colorado.

Not that the administrative tasks have been trivial. Begun in 2003, Chimney Hollow’s complex permitting process created consensus on issues ranging from local land uses to stream flows for fish and other wildlife. In the end, the $650-million project—of which nearly $500 million will go toward building the dam—is expected to help meet the region’s population growth while maintaining a reliable water supply for many of Eastern Colorado’s farmers and ranchers.

Still, Drager, director of engineering for the Northern Colorado Water Conservancy District, becomes animated when he speaks about his work on the dam and reservoir project, underway west of Loveland, Colo. Led by Barnard Construction Co. of Bozeman, Mont., on the ground work began in August and is due to finish in 2025. 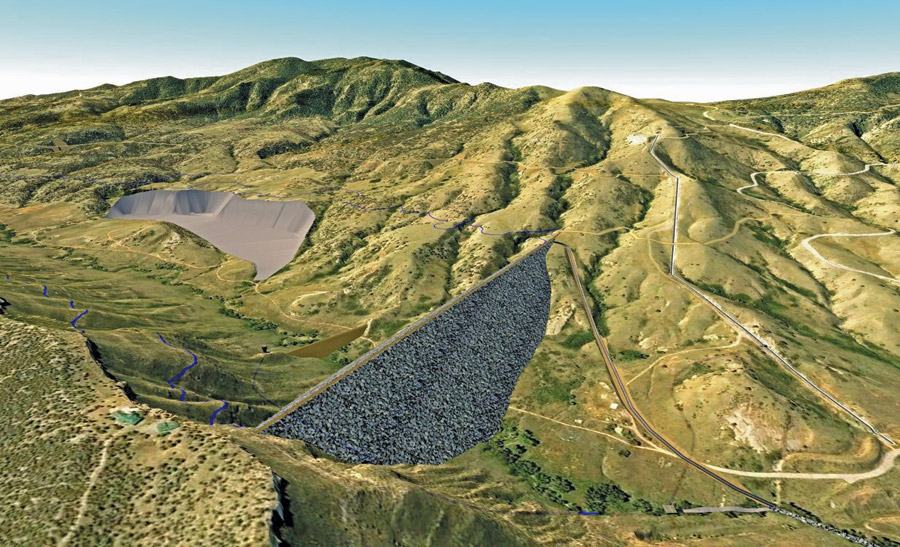 “It’s kind of exciting to be actually building something,” says Drager, who holds degrees in both civil and water-resources engineering.  “I’m finally doing what I really thought I was going to be doing when I went to college.”

For the Chimney Hollow project and other endeavors—two more planned reservoirs and an estimated $100-million commitment to build new offices for growing staff on both Colorado’s Front Range and Western Slope—ENR Mountain States has named the district, more casually known as Northern Water, as its Colorado Owner of the Year.

Headquartered in Berthoud, Colo., 40 miles north of Denver, Northern Water serves approximately 1 million residents, along with commercial, industrial and agricultural customers. Its boundaries stretch hundreds of miles, from the Rockies across the state’s northeastern plains all the way to Nebraska. 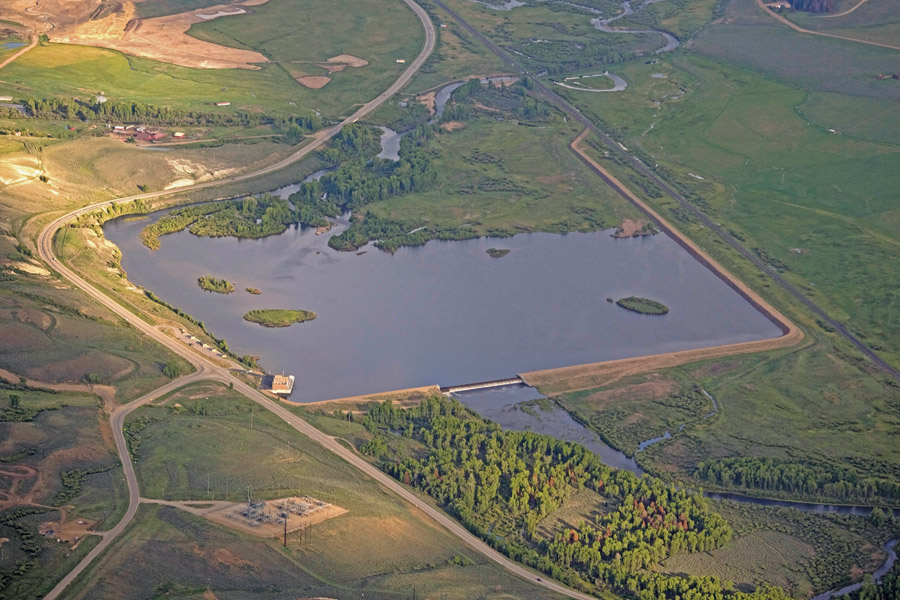 Windy Gap Reservoir in Grand County, Colo., gathers water below the confluence of the Fraser and Colorado rivers. Water is then pumped from Windy Gap Reservoir to Lake Granby for distribution via the Colorado-Big Thompson Project.
Image Courtesy Northern Water

The dam at Chimney Hollow will be only the second in the U.S. to contain an asphalt core; the first, in Morenci, Ariz., was completed in 2018. Northern Water chose asphalt because clay—a common material for dam cores in the U.S.—is scarce in the area, and transporting it from other locales was deemed too costly and created too many difficulties for residents.

WALO Civil, U.S. arm of the 105-year-old Swiss-based construction company WALO Bertschinger AG, will concurrently layer asphalt and place gravel in the middle of the dam as it goes up. Chimney Hollow will be WALO Civil’s first asphalt-core dam, although Jerry Reece, chief operating officer, says the parent company has completed many around the world. The dam will be approximately 1,000 ft thick at its base and around 3,000 ft across.

The two other reservoirs now being planned are expected to provide a combined 215,600 acre-ft of storage by approximately 2029. Currently in the late stages of design and approval, Glade Reservoir, northwest of Fort Collins, Colo., and Galeton Reservoir, northeast of Greeley, Colo., would comprise the main elements of the Northern Integrated Supply Project, another of Northern Water’s efforts to secure enough water for a region whose population is anticipated to double by 2050.  Together, the two reservoirs are budgeted at approximately $1.6 billion. 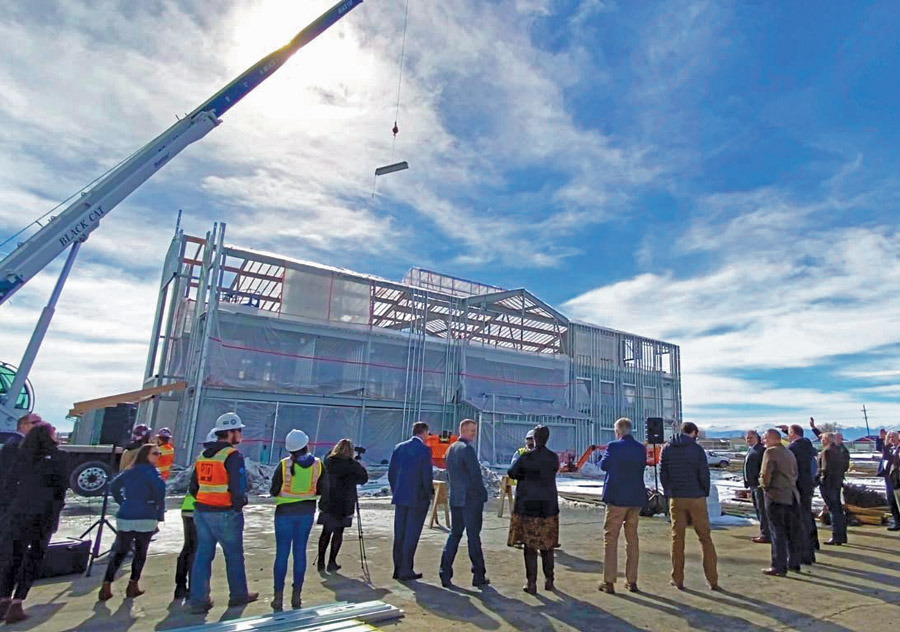 Members of the Northern Water board and staff observe the topping out ceremony on Feb. 10 for the control center building at the organization’s campus in Berthoud, Colo.
Image Courtesy Northern Water

Mike Applegate, Northern Water president, says Chimney Hollow Reservoir is “fulfilling the original vision” of the district’s Windy Gap Project, which was conceived in 1970 and completed in 1985. The Windy Gap system links with the federal Colorado-Big Thompson (C-BT) Project to carry water from the Colorado River on the Western Slope of the Rockies to many of the state’s population centers east of the Continental Divide. Approximately 80% of Colorado’s annual precipitation falls on the western side of the mountains, whereas around 85% of residents live on the eastern side.

“If someone’s water is not at their faucet or at their irrigation turnout, it matters to them, and that makes it matter to us.”
— Brad Wind, General Manager, Northern Water

Windy Gap, located on the western side near the town of Granby, diverts an average of 20,000 to 25,000 acre-ft of water each year from the Colorado River.  At the reservoir, pumps move the water through underground pipelines for six miles into Lake Granby, part of the C-BT system. From Lake Granby, Northern Water transports both Windy Gap and C-BT water (administered separately) east across the mountains through C-BT’s array of reservoirs, canals and tunnels.

But there’s a hitch—two of them, in fact. And they have put Northern Water in a bind during years both wet and dry.

The Windy Gap system exists mainly to divert water rather than store it. Lake Granby, meanwhile, can hold Windy Gap’s water only when it has room. In wet years, that’s a problem—because Lake Granby fills up with its own water from the Colorado River. Through a maze of complicated water rights, that entire supply goes to the C-BT project.

The second snag is equally vexing. Northern Water came into being decades after the rights to the Colorado were allotted starting in the 1800s. Consequently, the district has junior-member status throughout the river basin, which drains 246,000 sq miles in seven U.S. states and two in Mexico. Both above and below Windy Gap, more senior rights-holders get priority. To a degree, so do fish, other wildlife and vegetation. In dry years, that means many of the district’s hopes for water might never materialize.

This double-whammy means Windy Gap provides exactly zero “firm” yield—that is, a supply that Northern Water can count on every day. Thus, the need for a reliable reserve through the Chimney Hollow project. The district will consider up to a third of the reservoir’s capacity available for distribution in any year.

Northern Water is redeveloping and expanding its main office in Berthoud and the Western Slope office in Granby, Colo., to provide additional office space and ancillary facilities.
Rendering by RB+B, courtesy Adolfson & Peterson

At Windy Gap, a much-awaited feature of the project will be a mile-long “connectivity channel” that will let trout bypass the reservoir and swim freely both upstream and down. Designed to look like a natural waterway, the new channel also will allow sediment to flow and form gravel beds where fish can spawn and insects —a primary food source for trout—can develop. (Dams block sediment from rivers.) In addition, the water will stay cooler in the channel than in the reservoir, which is better for the fish. Finally, the new stretch will provide public fishing in an area dominated by private waters.

Whether protecting wildlife or ensuring a resource for a rapidly expanding area, Brad Wind, Northern Water general manager, says he and his 160-person staff feel fortunate to work in “a business where what we do matters.”

“If someone’s water is not at their faucet or at their irrigation turnout, it matters to them, and that makes it matter to us,” he says. “It’s great to work with people who realize that each and every day you’ve got to be making good decisions—thoughtful decisions about how to make that [water] availability more reliable.  That’s just what citizens expect.”

IMEG Corp. Chosen as 2021 Colorado/Wyoming/Dakotas Firm of the Year