IMEG Corp. Chosen as 2021 Colorado/Wyoming/Dakotas Firm of the Year

When KJWW Engineering Consultants and TTG Engineers merged to form IMEG Corp. in 2015, cities such as Golden, Colo., were watching closely.

TTG had a close relationship with small cities in the region, assisting with public projects from new traffic roundabouts to water system upgrades. Would the larger Illinois-based IMEG include municipalities like Golden—population of just 20,000—in its rapidly expanding future?

IMEG, after all, has been on a dizzying acquisition tear in recent years, adding about 20 locations to build its current 50-office network. The engineering design firm now employs about 1,500 and specializes in high-performing building systems, infrastructure, program management and construction-related services.

But Anne Beierle, Golden’s deputy director for public works, found no reason for concern. The change of ownership only strengthened the city’s relationship with the team.

“We saw a new letterhead and a new billing system, but as far as the service and personnel and high level of personal attention you get, nothing’s changed,” Beierle says.

Golden’s leaders continue to value IMEG’s creativity and personal touch, she says. The firm performed the utilities relocation and local street designs for Golden’s Linking Lookout, a pedestrian crossing that lowered Highway 6 and built a small park on the bridge deck.

“We are maybe not a traditional client,” Beierle says. “We are more willing to take risks and try unusual things. The work and the priorities can change on a dime. IMEG really gets that and is really flexible to our changing whims and changing needs.” 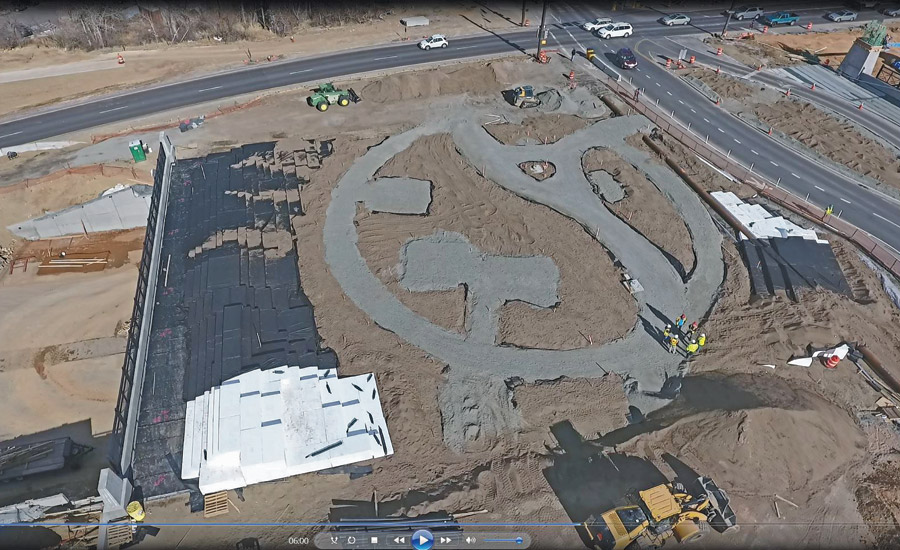 CREATIVE REDESIGN IMEG and the project team relocated the water and sewer lines at the Linking Lookout project, which expanded the bridge deck to add a park and lowered the grade of the highway below.
Image courtesy IMEG Corp.

Ken Urbanek was director of engineering at Denver-based MKK when it was acquired by IMEG in 2018. MKK sought out the larger firm for a merger in a quest to expand into new regions and markets while recruiting top talent.

Local offices retain a good amount of autonomy and continue to work directly with clients, says Urbanek, now a principal. “IMEG recognizes that each client, each owner, each unique market has slight nuances. That’s really critical. Here in the Rocky Mountain area, we have large urban clients in the Denver market, but then we really quickly turn to rural clients and smaller communities.”

“We’ve worked hand in hand,” says associate principal Taylor Goertz, who also joined from MKK and leads the civil engineering group. “I have my set of client contacts, Ken [Urbanek] has MEP and Peter Monroe has structural contacts. We can offer the whole package.”

Structural engineering firm Monroe & Newall joined IMEG 16 months ago, bringing 30 years of local expertise. “We now have even more flexibility to take on challenging projects,” says Monroe, now an IMEG client executive. “Instead of a staff of 30, we have 300 to tap into.”

IMEG’s lack of general architecture services was a plus when Monroe’s firm was considering the merger. “We didn’t want to be competing with existing clients because most of our client base is made of architects,” he says.

That made Monroe’s structural practice a great fit for IMEG’s other two groups in the Denver area. “In our previous life as MKK, we didn’t work a lot with architects, we worked for municipalities and master developers,” Goertz says. “Ken’s group and Peter’s group opened up a whole new market.” 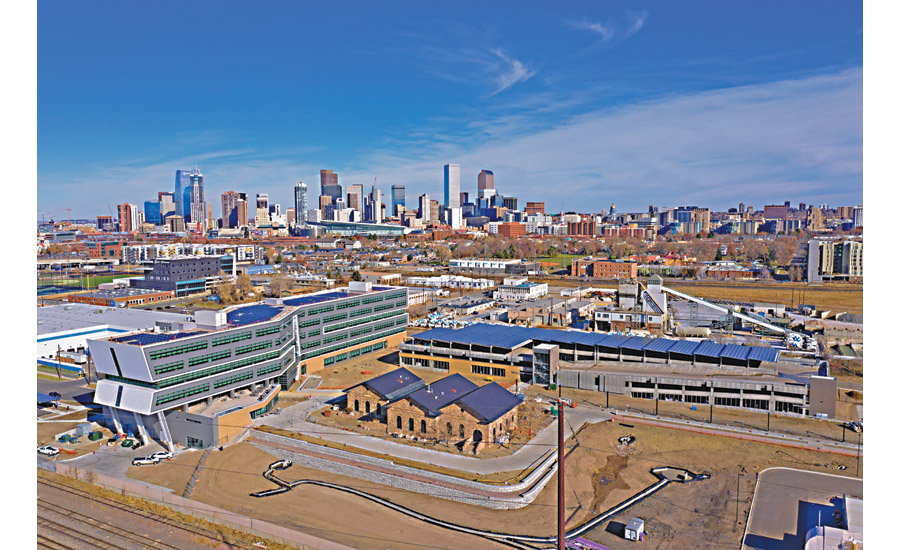 WATER REUSE Modernization of the 36-acre Denver Water Operations Complex in Denver (shown in the foreground) is a model of creative sustainability.
Image courtesy IMEG Corp.

Straddling Highway 6 in Golden is the Colorado School of Mines, a 6,000-student engineering college. The heavy student pedestrian traffic crossing the highway on 19th Street prompted the city to build the Linking Lookout project. IMEG stepped in to manage the relocation of existing utilities and redesign 19th Street.

A towering bridge structure wasn’t the best solution in Golden’s lovely mountain setting, so the city and project team got creative by expanding the bridge deck to add a park and lowering the grade of Highway 6. Most of the utilities serving the 400 houses on the far side of the highway were relocated deeper underground.

The biggest challenge was placing the water and sewer lines, says Golden’s Beierle. The team decided not to relocate them underground with the rest, but the Colorado Dept. of Transportation would object to water lines hanging off a bridge. IMEG proposed a different solution.

“We laid the water on top of the bridge under the park features,” Beierle says. “We were able to snake it through in places, planting things for cover and making a little park.” The $25-million project was completed in 2018.

IMEG backs up its local creativity and personal touch with national expertise, she says. After purchasing Coors Brewing Co.’s former headquarters to create a new city hall, Golden officials discovered that the condition of the three-story building was too poor for such a use. But demolishing the 300,000-sq-ft building was a daunting prospect.

“It was right next to the creek and built like a concrete fortress,” Beierle says. “It was a bunker.”

IMEG quickly stepped up. “They brought in the right team from around the country to do something outside of our comfort zone, to handle the materials and recycling, at costs we were super pleased with,” Beierle says. 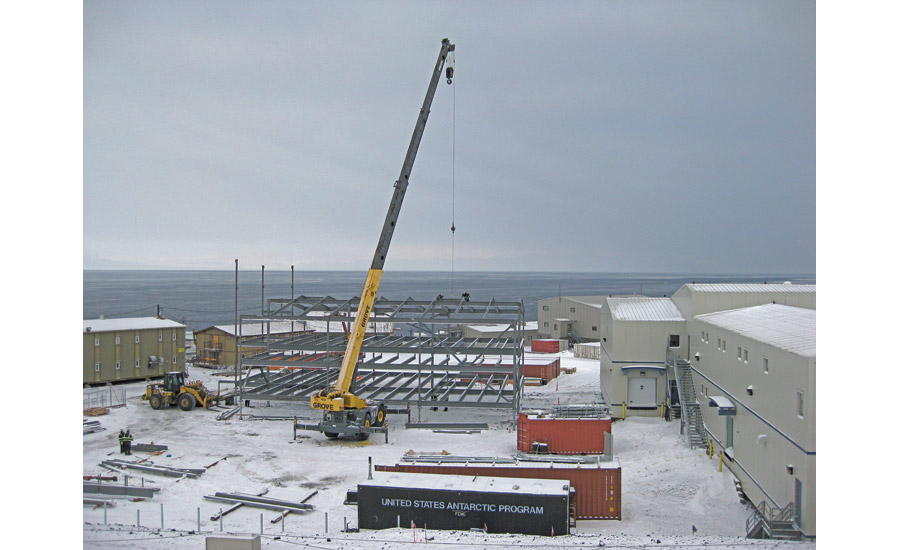 DOWN UNDER IMEG developed structural drawings for a building at McMurdo Station, a research station in Antarctica.
Image by Pedro Salom, ASC/National Science Foundation

Located less than 50 miles north of Denver with a population of 17,500, Johnstown is booming. City leaders are planning for 10,000 new housing units and 30,000 more people in the next 15-20 years, says town manager Matt LeCerf.

IMEG has been a big part of Johnstown’s plans, handling all of the town’s civil design reviews and often running 13-18 projects at once, LeCerf says.

The firm also is the engineer for Johnstown’s new sewer system, designed to accommodate future growth, LeCerf says. IMEG has been especially creative with value engineering, and those efforts reduced the project’s $16-million price tag by $6 million. The design’s strategic use of lift stations also helped avoid the costs and safety concerns of laying the pipe too deeply underground.

“We were able to avoid them and not impact their habitat,” he adds. “That could have cost substantial dollars, since for every one acre you disturb, you have to replenish their habitat by two acres.”

Despite IMEG’s size, dealing with their people is like dealing with a small firm, says LeCerf. “I can call Taylor (Goertz) at 8 p.m., and he will pick up the phone.” 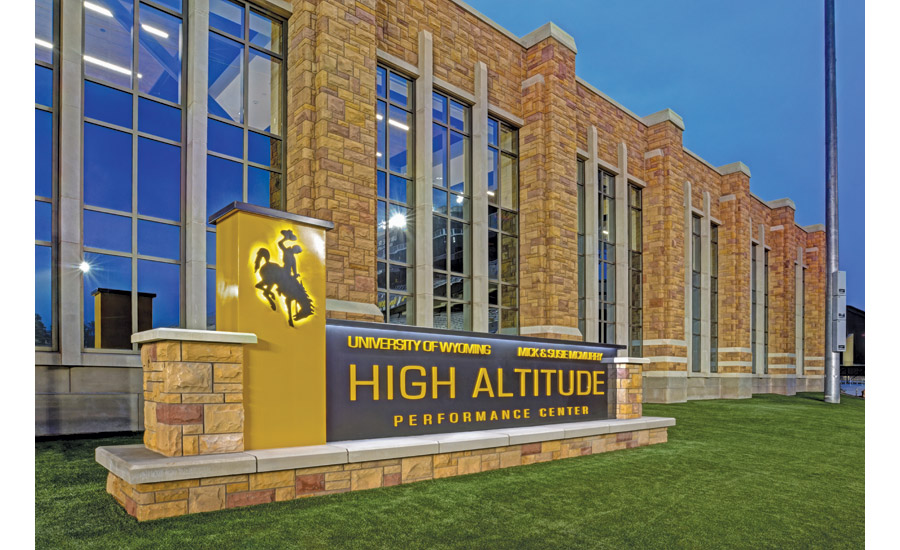 ATHLETIC TRAINING The High Altitude Performance Center at the University of Wyoming, with MEP design by MKK, now part of IMEG, houses a hyperbaric chamber with altitude-controlled training for athletes.
Image courtesy Universiay of Wyoming

One of IMEG’s top values is sustainability, both in its projects and its own business practices. More than 150 team members are accredited in LEED, WELL and energy modeling design nationwide. The company’s Denver office has earned WELL Gold certification with its wellness features such as high-performing air-quality systems and lighting installations that foster a healthy circadian rhythm.

The modernization of the 36-acre Denver Water Operations Complex is a model of such creative sustainability. As the water supplier for the Denver metro area—water operations have been located on the site since 1881—the agency wanted to set a high bar for good stewardship, says IMEG’s Urbanek.

To reduce water use, IMEG designed rainwater capture features as well as an onsite wastewater treatment system and an innovative scheme to draw energy from an existing water conduit running through the campus. Rainwater capture is a fairly straightforward technology, but Colorado laws are significantly limiting, Urbanek says. “We’re not allowed to do rainwater capture and reuse in 99% of our projects. But with Denver Water as a client, we were able to push it through.”

To limit energy consumption, IMEG and the team tapped into an existing 54-in. water distribution conduit that transported water from a mountain reservoir to a Denver pumping station. About 50,000 gallons of cool water flows through the pipe each minute, and the water’s temperature as well as the use of heat pumps allow the system to heat and cool the campus using about 1,000 gallons per minute, Urbanek says.

“It’s non-consumptive, so we pull the energy out or put energy into it and that water continues on its way to service water utility customers,” he adds.

IMEG’s Denver offices don’t just do regional projects. The company developed structural drawings for a new building on McMurdo Station, a research station in Antarctica. The team wasn’t worried about the area’s snow loads, says Monroe—Colorado’s snow loads are heavier—but it was concerned about the permafrost.

IMEG’s design placed the 250,000-sq-ft building on stilts so it didn’t melt the permafrost beneath and cause the building to sink. The design also added weight to handle the 150-mph winds.

Monroe, Urbanek and Goertz have all grown accustomed to IMEG’s large support system when working on projects. Marketing and business development are more comprehensive and nearly any unexpected challenge can be addressed in-house without bringing on a subcontractor.

“If I’ve got this project and I want a structural engineer to look at it real quick to get their take, I now have that ability,” Monroe says. “The efficiencies with that are just tremendous and help keep us moving projects forward.” n