This website requires certain cookies to work and uses other cookies to help you have the best experience. By visiting this website, certain cookies have already been set, which you may delete and block. By closing this message or continuing to use our site, you agree to the use of cookies. Visit our updated privacy and cookie policy to learn more.
Home » Mass-Timber Project Makes Its Mark on Nashville's Music Row
SoutheastSoutheast Construction Projects
Digging Deeper | Office Buildings

In 2015, when Sony BMG and Universal Music left Music Row to lease office space in downtown Nashville, some worried about the future of the historic neighborhood where country music greats like Dolly Parton and Elvis Presley recorded their hit songs, says Hayne Hamilton, senior development manager for Panattoni Development Co.

“They told us we’d love to stay on Music Row … but there’s no Class A office space,” Hamilton recalls.

John Dotson, founder of the Nashville Music Row Neighborhood Association, says residents were initially opposed to the project, but community meetings with the developer resolved the conflict. Panattoni’s modification of the original plan from a seven-story structure to a five-story one also helped, Dotson says. He adds that Sony and Universal plan to return to Music Row while Warner Brothers Records, which never left, has plans to expand. 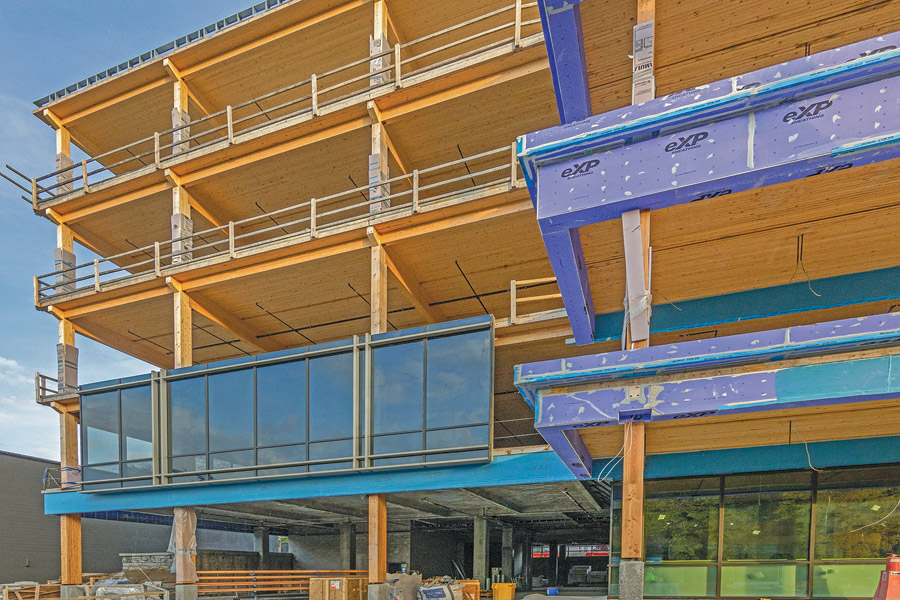 Turner Construction started the project in September 2020 and topped out the structure a year later.
Photo by Big Acorn Studios

Construction for the $60-million, 122,000 sq-ft project began in September 2020. It topped out in September 2021, and with the core and shell now complete, it has plans for occupancy by Feb. 28, on schedule and within budget, says Hamilton.

Panattoni will soon begin building out space for the first two tenants (businesses that are not music-related), and the building will be 100% occupied once the space is built out in six months to a year, he estimates. Hamilton predicts a 50/50 split between music and non-music-related tenants.

“The big benefit is that it keeps music growing, relevant and vibrant and keeps the tenants that want to stay on Music Row on Music Row,” says Curtis Lesh of Tuck-Hinton Architecture & Design, Nashville, architect for the project. “The timber space, which produces a pleasing acoustic quality, is also expected to accommodate music-related companies … that have sensitivity to acoustics and acoustic privacy,” he says. StructureCraft served as the engineer of record and timber and steel subcontractor for 1030 Music Row.
Photo by Big Acorn Studios

After completing four months of initial design work last December, the team focused on coordination, says Rob Binford, senior project manager for Turner Construction, the project’s general contractor. That involved “coordinating mechanical, electrical, plumbing and the curtain wall enclosure through building information modeling, and how that interacts with the timber,” he says. Unlike working on a reinforced concrete or steel building, “mass timber is ultimately a little unforgiving,” he says. “You just can’t put a hole in the floor or a beam, then fill it back in if you need to change something.”

The team was able to manage coordination during the time required to blast through salt and bedrock to excavate for a garage that descends four levels beneath the structure for a total of 55 ft into the ground, Binford says.

“After blasting a very deep hole in the earth, we poured a reinforced concrete parking structure to get back up to street,” Binford says. “Fortunately, that coincided with the time it took to fabricate the glulam materials made in Austria and then shipped to us.”

The glulam required about three months for fabrication and shipping, the longest lead time of any project item, says Binford. The team was able to receive all its materials stateside into a marshalling yard near the jobsite where it stored deliveries until everything was received  and contruction could begin, he says. 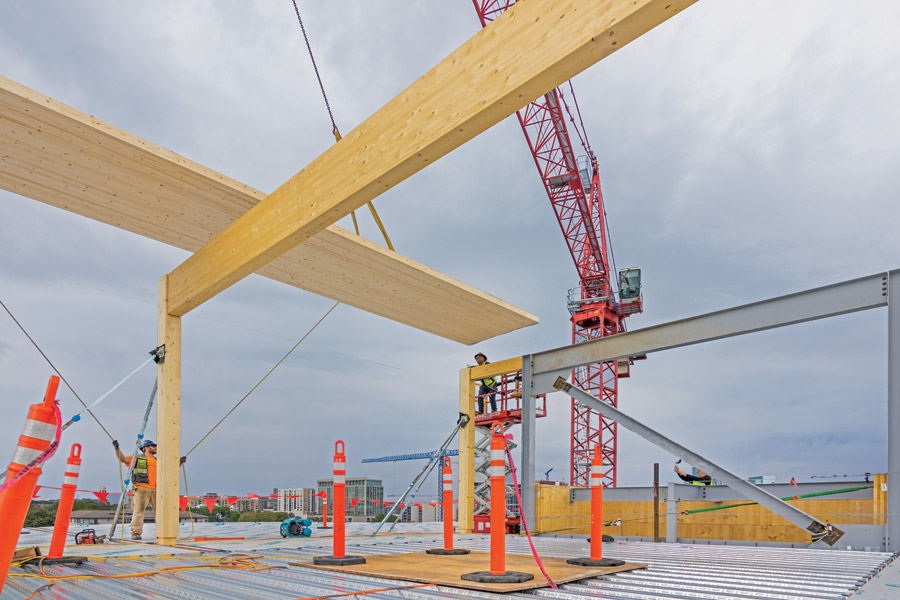 Since wood is a lighter material than concrete or steel, not only is it a safer option but it requires less labor for installation
Photo by Big Acorn Studios

The Turner team faced some challenges with rain. “But the beauty of timber is that it is a natural element that can accommodate those variables; we erected the building in three months by the third week in August 2021,” Binford says.

Engineers at StructureCraft, engineer of record and timber and steel subcontractor, chose steel for the core to improve schedule and cost efficiency over a traditional concrete core.

“To minimize the exposure time of the walls to the elements, the steel core was erected first so the CLT elevator shaft could be dropped in from the top after the first four levels of steel had been erected,” says Colby Redekop, structural engineer. The steel core added complexity to the detailing of connections, which required BIM coordination and 3D modeling to ensure a clean finish.

Managing tolerances of the connections between the steel frame and timber portion of the building was also challenging, Redekop says. “We are placing our timber with very high construction tolerances and landing on a post-tensioned slab and concrete, which in general has less strict tolerances,” he says. “When landing our glulam columns, we couldn’t risk anchoring into the slab and hitting any of the post-tension cables; the solution was cast-in-sleeves in the concrete to receive the glulam columns accurately.”

Installing a CLT elevator shaft was a challenge, says Binford.  “Basically, the elevator is in a wood box by the time the job finishes,” he says. “We anticipated that might raise the ire of some inspectors; even though it meets the requirements for code, it is unusual.” Turner benefited from having an office in Portland where they have built four mass-timber projects since 2016 and tried to install a similar elevator shaft before but failed to gain approval from code officials.

Turner met with Nashville fire marshal and code officials early. “The state elevator inspector was hard to convince, but ultimately, we didn’t have to change anything,” Binford recalls. “It takes a level of trust between code officials, the general contractor and the architect.” 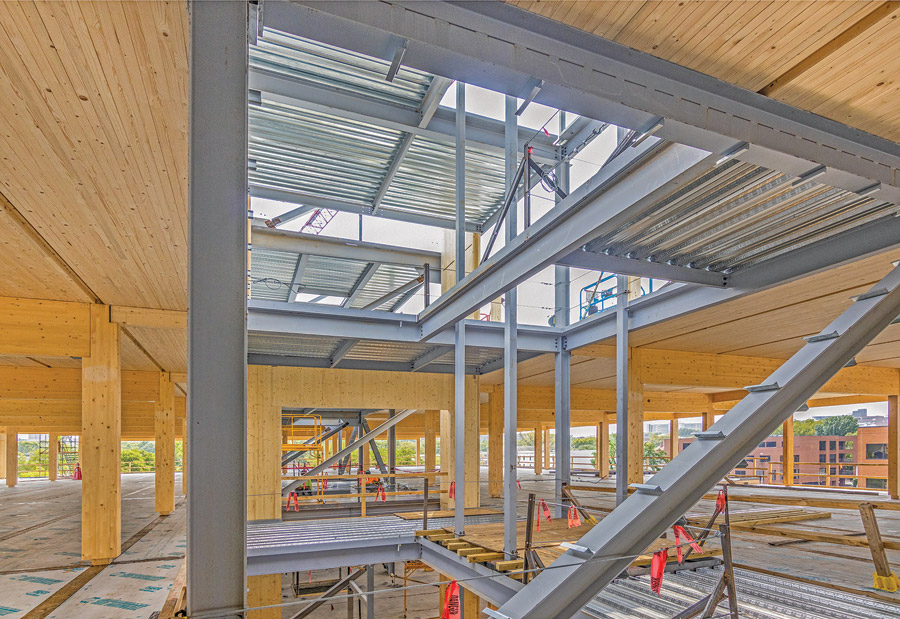 Mass timber is prefabricated and precut before arriving to the jobsite, allowing for faster erection than steel.
Photo by Big Acorn Studios

Some of the columns for Music Row are two stories tall, says Redekop. “Rather than pick up a column for every level, you place it once and then it’s there for two stories,” says Binford. Crews also placed up to 54-ft-long panels on this project.

“Our team was able to put up a floor in about one and a half to two weeks,” Redekop says. “They would be able to land the columns, the beams and get the DLT [dowel-laminated timber] floor on and get up to the next floor.” Structure Craft’s erection crew used an average of six people.

“If there is an upside to the wood and glass structural concept, it makes a lot of people happy,” says Dotson. “We were getting tired of steel and glass, and black and monolith. The wood … feels a little warmer, a little more organic.”