While having lunch with his executive director at the Four Points hotel in British Columbia’s Kelowna International Airport, KF Aerospace founder Barry Lapointe pulled out a red pen, asked the waitress for a piece of paper and began drawing a building shaped like an aircraft.

This was in May 2017, when he first conceived the concept for the two-story, 60,000-sq-ft KF Aerospace Center for Excellence museum now nearing completion in Kelowna on the eastern shore of Okanagan Lake.

The busy entrepreneur was quick to delegate the details, says KF Aerospace executive director Paula Quinn. “‘It’s got to be mass timber; it’s got to look like an aircraft; and I want it built at the airport,’ he said, so basically we … had to run with this little drawing,” Quinn recalls. “He wanted to leave something that would tell the story of aviation in the Okanagan.”

The clear airplane “design concept of placing people into a hub sandwiched between two hangars was almost instantaneous,” says Jim Meiklejohn, senior partner at Meiklejohn Architects Inc. in Kelowna and lead architect for the project.

“The challenge was to develop Lapointe’s diagram into an architecture form that was sophisticated but remained simple,” Meiklejohn says. “The roof structure was based on our architectural sketches,” which StructureCraft then modeled using Grasshopper 3D, a plugin that runs inside the Rhino 3D computer-aided design app that maximizes material efficiency to span the space. “The result was reminiscent of a complex curved wing shape,” says Meiklejohn, with spars, trusses and cables. 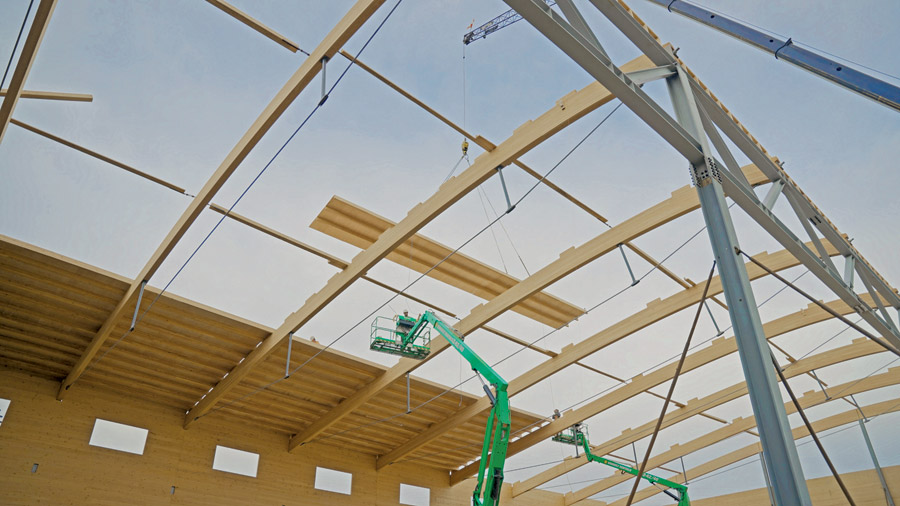 The $26-million project began on KF Aerospace’s 51st anniversary in March 2021 and is scheduled to finish on budget and on schedule for its 52nd anniversary next month, Quinn says. It is the first museum/hangar project of this size with the Green Construction (GC) Wood program, which supports expanding the use of wood in construction and Canada’s transition to a low-carbon economy, says Kevin Imthorn, vice president and project manager at Sawchuk Developments Co., the British Columbia-based construction manager for the project. Sawchuk is employing a 2010 construction management contract for services, the Canada-wide standard for CM.

Sawchuk completed its first budget for KF Aerospace in May 2020 based on the current site and produced a Class C budget by December, with a tight timeline to open by March 25. 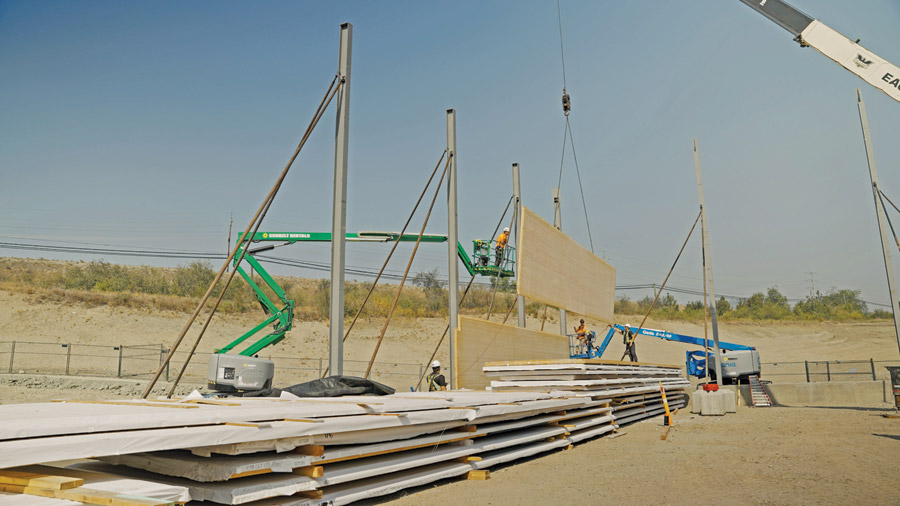 An average of 12 panels per day are installed with a crew of four people and a crane operator.
Photo courtesy Naturally Wood & Agency Media

Lapointe, KF Aerospace’s sole shareholder, funded the project with support from Natural Resources Canada (NRCan), which awarded $800,000 to support design and construction in May 2019 when an agreement between NRCan and KF Aerospace was announced, a representative said. Since then, an additional $100,000 has been awarded to KF Aerospace, one of 30 applicants from across Canada (10 received awards). KF Aerospace’s Quinn, however, estimated the total received to date was $700,000 and confirmed that all funds to be disbursed over three years had not been received as of early February.
“It will be the first of its kind in Canada, using state-of-the-art floor and tall wood-based systems to accommodate the large spacing between columns—a typical design element for a hangar but not yet done using this innovative building system,” said NRCan in a statement last year.

Once complete, the structure will include an aviation museum and a conference center. “The total carbon benefits realized from the use of mass timber for this construction are an estimated 1,753 metric tons (1,932 tons) of carbon dioxide,” NRCan said. 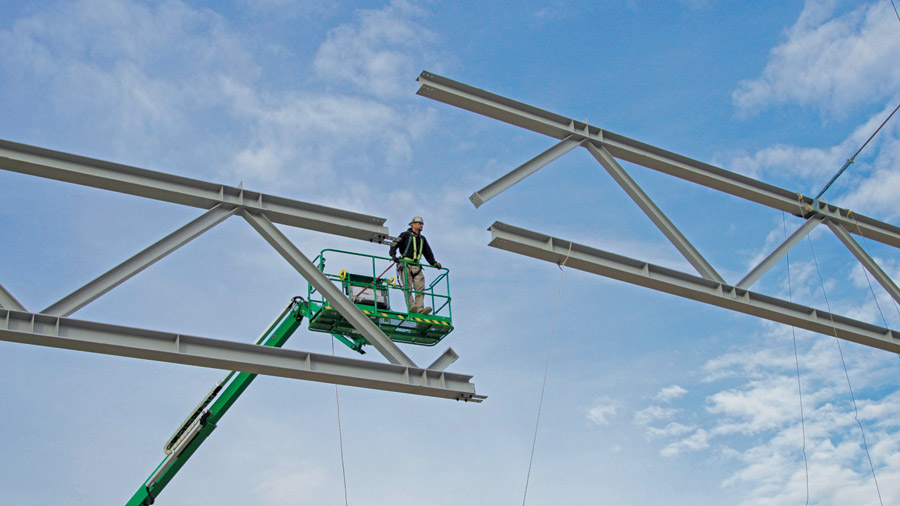 Lucas Epp, vice president and head of engineering at British-Columbia-based structural engineering and timber construction firm StructureCraft, says the team developed a concept for spar trusses designed like World War II-era Spitfire fighter planes. “This spar truss goes along the wing while the rib trusses run perpendicular to the spar trusses and create the shaping of the wing,” he says. This Spitfire-spar-truss concept “turned our roof structure into a giant steel spar truss, spanning across 115-ft-wide operable glass doors, with timber rib trusses that create the shaping,” Epp says. The structural design team matched some of Lapointe’s favorite math equations for how to describe the exact shape of a wing profile to allow them to play with that shape.

In the first meeting with Lapointe, while discussing development of airfoil wing shapes from the Wright brothers to the supersonic stealth fighters, the team chose the classic NACA (National Advisory Committee for Aeronautics) airfoil equation, Epp recalls. Using that equation, the team took a computational engineering approach to develop “parametric models which used genetic algorithms to optimize and iterate on the different geometrical shapes for the wings using real-time structural analysis to assist in creating the most structurally efficient truss structure,” he says. 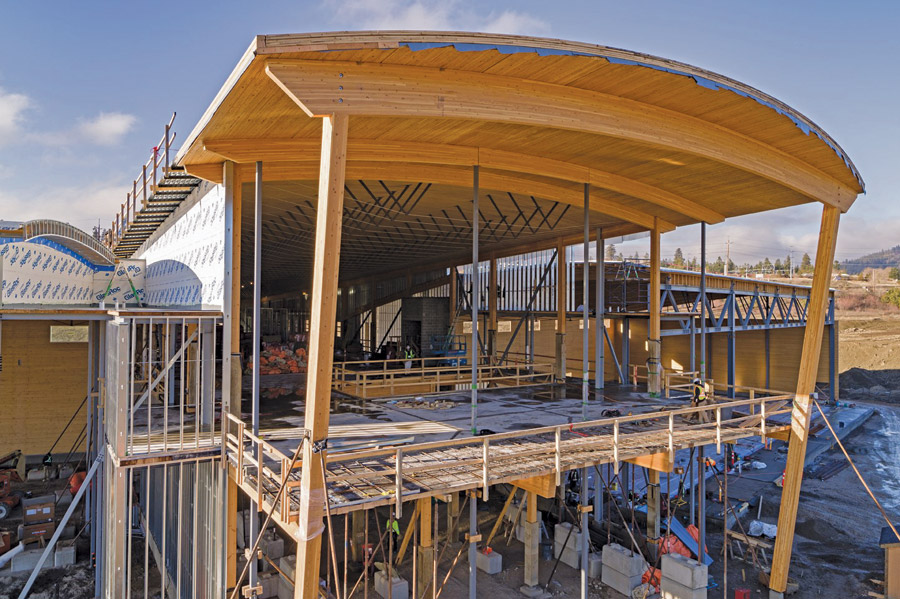 During design development, one challenge involved building the center high enough so that travelers could observe aircraft on the runway from the second floor without obstruction by private single-story-high AST hangars that the site overlooks. “We used a drone to help set and confirm our elevation for the second floor,” Imthorn says.

“This resulted in a second floor that was to be 23 feet above the main floor,” posing the challenge of how to connect these two spaces, says Meiklejohn. The solution was a spiral, freestanding doubly curved CLT timber-concrete composite staircase, Epp says. The design includes timber on the bottom with concrete on the top to add strength and some mass, he notes. StructureCraft is using inhouse radial jigs to build the 24-ft-high by 80-ft-long staircase in halves at its manufacturing facility in Abbotsford, British Columbia. Nothing like it was commercially available in North America or worldwide. 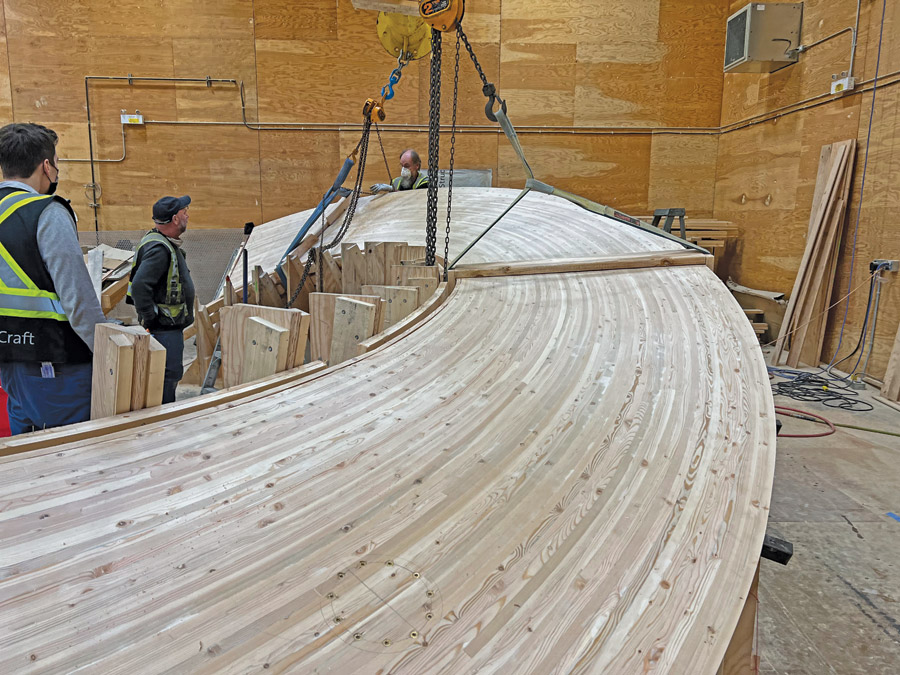 Fabrication of doubly-curved CLT forms a structurally freestanding CLT staircase. Each CLT lamination had to be form-fitted and glued into place on a custom jig.
Photo courtesy StructureCraft

During a 2019 design charrette, the owner, Sawchuk and Vancouver-based code consultant GHL joined to consider a hybrid building with two-hour fire separations between the hangars and the building hub, which includes the museum and gallery area, but “settled on a mass timber project” with two-hour separations between the hangars and the hub, Imthorn says. Lapointe was determined to have a mass-timber project that sourced as much timber as possible locally within the province.

To achieve Lapoint’s vision of building a locally sourced project, Sawchuk was successful in sourcing its wood from British Columbia, Imthorn says. In designing its four steel hangar doors, two of which are 40 ft wide by 31 ft tall and two are 114 ft wide by 31 ft tall—a scale that Imthorn claims has never been manufactured before—it chose Powerlift of Minneapolis. 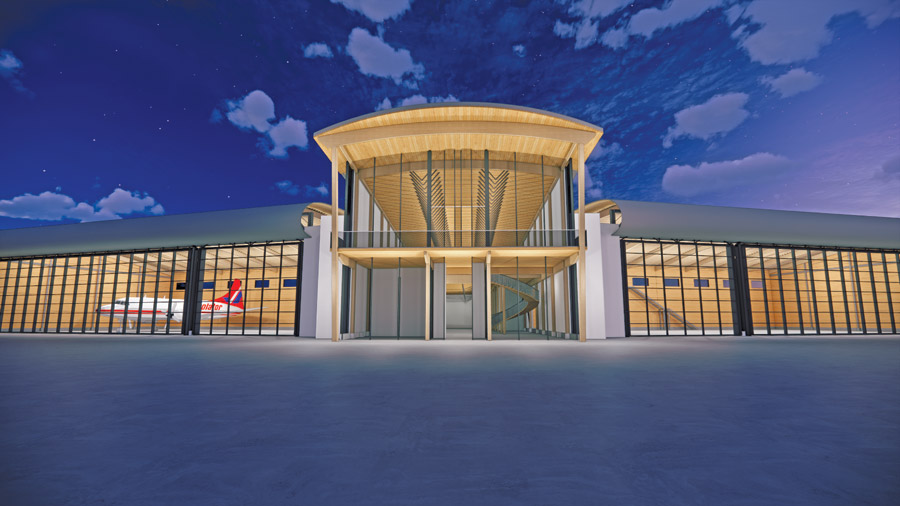 Rendering of the 60,000-sq-ft KFA Center for Excellence, which expands its “wings” from a central fuselage-shaped hub with conference rooms and offices.
Photo courtesy StructureCraft

Once building permits are in hand, it can take three months or more to receive approvals from YLW, Navigation Canada and Transport Canada to allow for equipment mobilization, he says. “Everything takes three times as long as the traditional project,” a result of an inherently challenging regulatory environment aggravated by COVID-19, Imthorn says.

“We had to make sure our building sat underneath this OLS, and any time we had a crane set up, we had to have prior approvals from NavCanada and Transport Canada since that would penetrate the OLS,” he says. That required extensive planning since the pandemic made it more difficult to reach officials.
Permitting is currently finalized, with closing documentation required to “rubber stamp” the close of construction for NavCan and Transport Canada, Imthorn says. “They need to know the buildings are in now in the vicinity of their airspace … and we have to put a strobe light on top of the building,” he says.