This website requires certain cookies to work and uses other cookies to help you have the best experience. By visiting this website, certain cookies have already been set, which you may delete and block. By closing this message or continuing to use our site, you agree to the use of cookies. Visit our updated privacy and cookie policy to learn more.
Home » D.C. Mass Timber Project Adds Three Floors to Commercial Building
MidAtlanticMid Atlantic Construction Projects
Digging Deeper

In 2019, when Columbia Property Trust was mulling how to increase the height of its existing 90-ft, seven-story, concrete-framed office building at 80 M St. SE in Washington, D.C., it chose a mass timber frame over a steel frame for an addition atop the oldest high-rise in the Navy Yard neighborhood. That was a ground-breaking choice. It would mean that the facility would  be D.C.’s first mass timber commercial office building.

Anthony Vieira, Columbia Property senior director of development and construction, says the team selected mass timber because the steel’s added weight would have required reinforcing the building’s piles much more extensively than the heavy timber option would involve. That additional reinforcement would have been much more disruptive to tenants, he adds. Vieira says the choice was based more on not disrupting tenants than cost savings.

The calculation was made before the COVID-19 pandemic turned the project into largely an unoccupied renovation because building occupants began to work remotely, he says. Although the building in early December remained about 30% occupied, Vieira says his firm doesn’t regret its choice of timber.

“We chose mass timber because it offers comparable strength to concrete at a lighter weight load, with faster construction timing and less onsite labor required, all of which allowed us to increase the height of the building in a way that minimized the overall impact to the rest of the structure," he says. 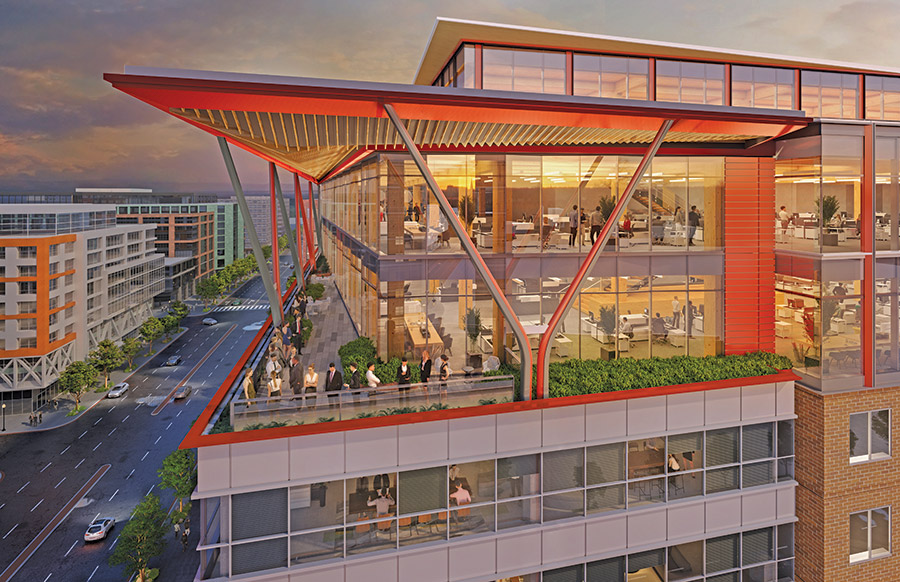 The 80 M St. building will sequester 834 tons of carbon emissions—equivalent to a carbon offset of about 1,000 acres of forest over a full year of growth, according to Columbia.

Aside from the pandemic, the project team faced other challenges.

These included navigating permitting requirements while working closely with the D.C. Dept. of Consumer and Regulatory Affairs to achieve a code modification for mass timber; the commissioning of custom timber fire-testing; and building an innovative interstitial layer of steel to help align the existing building with the addition. The team locked in pricing and procurement prior to the pandemic, which worked in its favor, helping avoid impacts from the recent price escalation in materials.

Upon completion, scheduled for the second quarter of 2022, the building also will become one of the first mass timber overbuilds in the nation—following 69 A St. in Boston. The American Trucking Associations plans to lease 60,000 sq ft—more than half of the expansion—for its new headquarters.

Lobby renovation, including construction of a new point-supported glass facade at the new entry, is also underway. Penthouse amenity work and lobby renovation will continue through next spring. 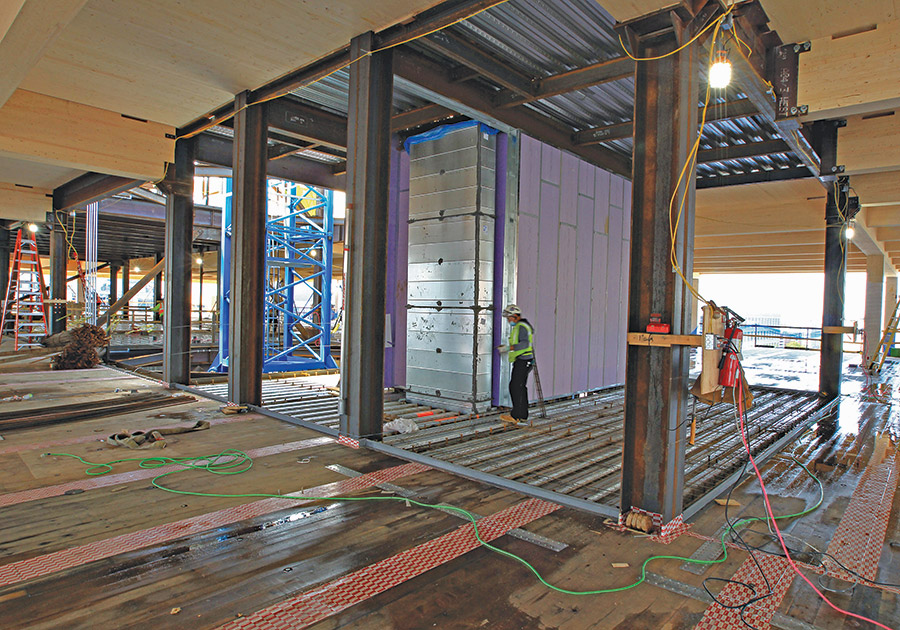 A traditional steel structure was used for both the vertical lateral system in the core area of the overbuild as well as a new level floor directly above the existing roof.
Photo by Maurice Harrington Sisson Studios, Courtesy Davis Construction

The design team received department approval in May 2019 for a modified version of Type IV-C construction typically used for totally exposed six-story mass timber structures with a two-hour fire-resistance rating under the 2021 International Building Code. Due to the lack of available fire-tested connections,

Arup’s structural and fire engineers refined the fire-tested and approved two-hour beam-to-column Framework connector, so it was faster to construct and could carry higher loads, Larson says. Components used for the Framework connector, which won the $1.5 million 2015 U.S. Dept. of Agriculture Tall Wood Building competition, were the first ever to pass two-hour fire tests. 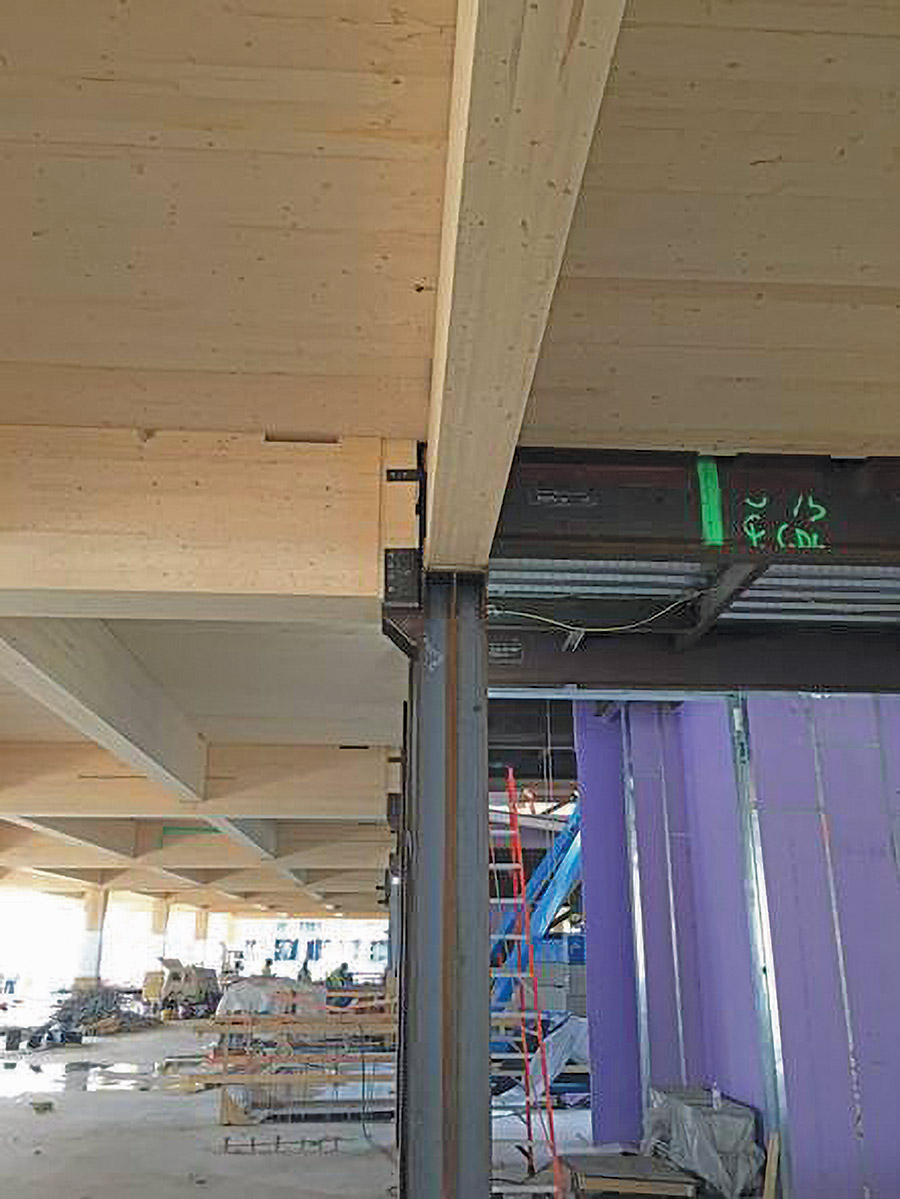 Designers created U-shaped buckets for connections where a timber beam connects to a steel column. That connection rests in the bucket like a socket.
Photo courtesy Davis Construction

The team tested the connections for two months in summer 2020 before receiving DCRA approval for a code modification, Larson says.

The project’s location adjacent to the Navy Yard station on the Washington Metropolitan Area Transit Authority’s Metrorail Green Line “triggered a close review and monitoring” with the transit agency, adding time to complete permitting, Wright says. “Because of the elevation of the existing [Metro] tunnel structure in relation to the 80 M foundation system’s lowest elevation, the building was deemed to be within the zone of influence.”

The project used about 1,380 tons of mass timber engineered from hardwood grown in the Pacific Northwest and eastern Canada, Columbia says. The Canadian spruce, pine and fir grades of lumber were supplied by venture-backed start-up Katerra before it filed for bankruptcy reorganization on June 7.

Because Katerra was an early-release, timber design-assist partner and supplier/erector, the team benefited from obtaining and storing the timber slightly earlier than expected, says Sean Fox, senior project manager for Davis. “Creating early-release packages [in fall 2019] for the mass timber, curtain wall and elevators was critical to the schedule,” Fox added. Due to current legal concerns, Fox was not able to say whether Katerra would be held responsible should any timber-related problems develop in the future.

After carrying out an analysis, the team realized that obtaining the timber six or eight weeks earlier would not have been cost effective. The reason, Fox says, is that contractor-pool feedback indicated the cross-laminated timber portion of the timber for the vertical expansion had a relatively short lead time. Moreover, he adds, with access to Katerra’s computer models, the team could adjust the balance of the order it placed. 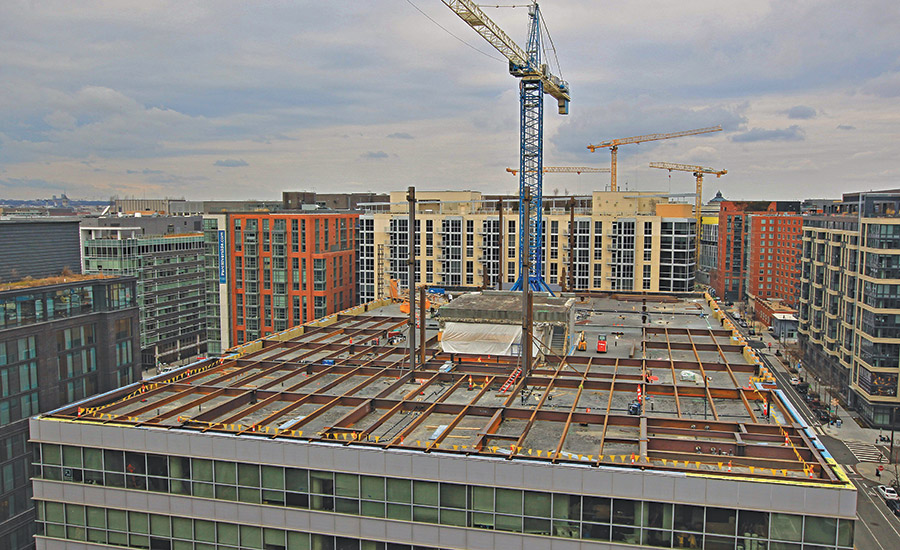 Although mass timber was a key element of the project, the team chose to build the interstitial layer of steel using a hybrid approach combining Type IV-C construction with some components of Type IV-B construction.
Photo by Maurice Harrington Sisson Studios, Courtesy Davis Construction

When the pandemic hit, Columbia worked with Davis to alter the project’s sequencing, Vieira says. “This allowed us to complete a major piece of the construction ahead of the original schedule by moving up “the painstaking process of strengthening and reinforcing the building’s existing steel columns” to support the three-floor addition.”

Because the existing grid was large at 30 ft by 30 ft, secondary beams were introduced to support the cross-laminated timber floor panels. This allowed for “minimally invasive” structural upgrades, such as “jacketing a couple of columns from top to bottom,” Fox says.

The team then focused on modernizing the elevator and mechanical systems, including reconfiguring the elevators for use during and after construction. Crews moved a large elevator machine room atop the building to a lower level during demolition sequencing. Fox says that created a major challenge because it was difficult “to keep an elevator system functional while demoing half of it out and building a new structure around it.”

Davis engaged Arup and Holbert Engineering Co. to leave most of the structure of the elevator machine room in place to keep the building running temporarily. The machine room was demolished after the structure was largely complete.


New with the Old

To align the existing building with the addition, Hickock designed an interstitial layer of steel using the extra height allowance between the existing roof and new eighth floor. That shortened the schedule and saved $300,000, Fox says. The more typical alternative would have been to reinforce the existing roof and “beefing it up” to use as a new slab, he says. That would have significantly conflicted with beams on the floor below and restricted heights.

“We didn’t have to do an as-built for the mass timber to existing columns and try to make it fit on top of the old building,” Fox says. “After creating a new column grid on top and re-centering each column plate, the team built the interstitial layer about 4 feet above the existing roof.” That became the new eighth floor before crews placed a concrete deck, Fox says.

Although mass timber was a key element of the project, the team chose to build the interstitial layer of steel using “a unique hybrid approach” combining Type IV-C construction with some components of Type IV-B construction, Wright says. “A traditional steel structure was used for both the vertical lateral system in the core area of the overbuild as well as a new, level floor directly above the existing roof to allow for a simple transition from the existing structure below to the new timber structure above,” Larson says.

As with other vertical expansions, the team focused on creating slightly more tolerance to existing conditions, Fox says. In the middle of the steel structure—erected by Corus Steel, a unit of India-based Tata Steel—Katerra designed U-shaped buckets for connections where a timber beam connects to a steel column. That connection, he says, “rests in the bucket almost like a socket.”

For the curtain wall, the team chose an off-the-shelf engineered system from Ontario-based Erie Architectural Products with Viracon architectural glass installed by TSI Corp. The system required only minor modifications and engineering to make it functional, Fox says.

He adds that the team faced challenges with curtain wall installation due to the 16-ft floor-to-floor ceiling heights. Height restrictions are typically 12 ft in D.C., but this work was performed within code limits. The team experienced “a bit of a hiccup” when Erie’s facility lost three weeks of production due to Canadian COVID restrictions in late spring, Fox recalls. “But Davis built that into the schedule,” he says. “It didn’t impact the job.”