An $84-million municipal sports arena in the final stages of construction in Henderson, Nev., needed its own fast break. The 6,000-seat Dollar Loan Center opens this spring in Nevada’s second-largest city after completing design and construction in only 18 months.

A key factor in meeting the compressed schedule was accommodating the main tenant and an investor in the project. The Henderson Silver Knights minor league hockey team has a 20-year lease to play at the arena, and a management group associated with the team, which also will operate the arena, is splitting construction costs with the city.

The two-year-old Silver Knights, affiliated with the NHL’s Vegas Golden Knights, currently plays its games at an out-of-town rink several miles away, adding to the team’s costs and making it harder to build a fan base in Henderson, a suburb of Las Vegas that is home to 300,000 people.

“We’re trying to get this done as fast as possible,” says Troy Westover, Henderson’s facilities manager in charge of arena design and construction. The city, which owns the 200,000-sq-ft arena and manages the construction project, opted to award the project through a design-build competition.

“We said, ‘Here’s the price, what can you deliver?’” says Westover. “When we awarded it, there was nothing left to negotiate.” 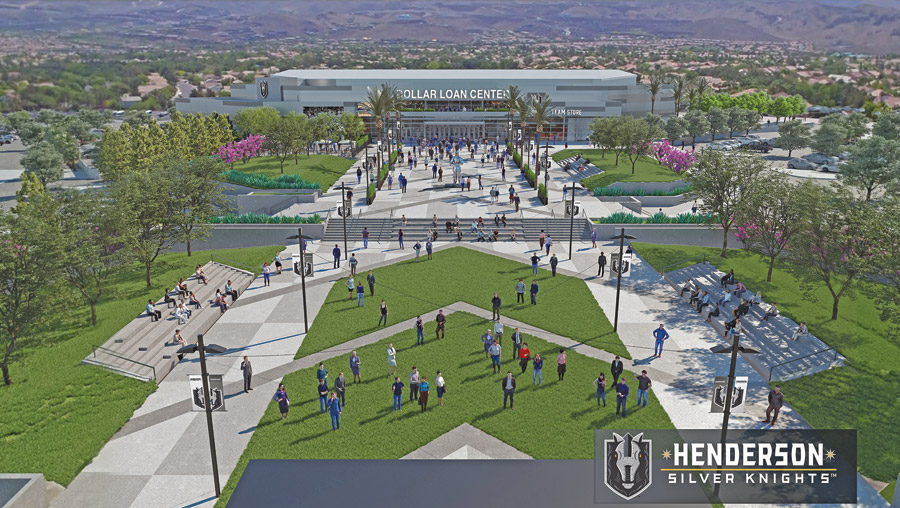 A large plaza will be used for pregame activities and events separate from the arena, part of the city’s plan to create a multiuse facility.
Image courtesy of Henderson

The result is an arena that takes several cues from T-Mobile Arena, where the Golden Knights play, including an outdoor plaza, a castle-themed interior, a heavy emphasis on hospitality outlets and observation decks that overlook the ice.

“The seats are close to the action, and it will be a loud, vibrant building for the Silver Knights,” says project architect Don Dethlefs, a Denver-based principal with Perkins+Will. The firm, which has done more than 70 arena projects, partnered with longtime architecture collaborators Klai Juba Wald of Las Vegas on the Dollar Loan Center.

It will feature 28 luxury suites and a suite-level outdoor deck with views of the Las Vegas Strip. There also are extensive exterior public event spaces, with the arena expected to serve as a community gathering place and host graduations, concerts, musicals and cultural events.

“You can’t underestimate those kinds of uses; beyond being an arena, this is a great community facility,” says Dethlefs, who personally has worked on 58 arena projects. He added that the multiuse facility will “work as one big whole,” with the city planning to use the site for municipal events as well.

The arena exceeds ADA requirements and provides handicapped access to all seating areas, something Westover says was a priority.

“We went above what’s set out in code,” he says. “We hired a third-party consultant [and] sought input from city residents, and members of the disabled community came on site and showed us ways to make the building even more accessible.”

One area where the new arena hopes to excel without notice is by avoiding long restroom lines that often vex patrons. Westover says the number of toilets and urinals exceeds code requirements by 30%, with the goal of getting patrons into the restroom in two minutes or less.

“We worked with a Green Globes consultant all the way through and ended up with a better building.”
—Troy Westover, Facilities Manager, City of Henderson

“They had to provide those calculations in their bid submissions,” he says.

The preengineered metal structure, with metal wall panels and a membrane roof, also will become a key part of Henderson’s embrace of professional sports. An arena football team will play at Dollar Loan Center, and Henderson already is home to the NFL’s Las Vegas Raiders training facility and offices.

As examples of that investment, March points to new restaurants and stores being planned for long-vacant parcels at an upscale shopping center within walking distance of the new arena. Also, the area near the Raiders complex in west Henderson has seen an influx of medical facilities, including sports medicine practices and a new Valley Health System hospital campus.

In June 2020, Henderson City Council selected Whiting-Turner Contracting Co. as the general contractor for the project, and Westover says the company came prepared.

“The contractor at the proposal presentation brought in 300 pages of construction-ready documents,” he says. “They invested a lot of time in the bid process to be ready to go. We were literally working out details during the proposal phase; we weren’t starting from scratch.”

Nearly 450,000 work hours have gone into the job, which has provided employment for 1,500 people.

The city sought a commitment to diversity before awarding the contract and reports “the team was utilizing approximately 14.5% MBE (minority business enterprise) services” in various roles across the project.

Westover says he expects the arena to be recognized by the Green Building Initiative’s Green Globes awards for its energy-efficient ice-making plant and for recycling concrete from demolition of the amphitheater that once stood on the site. The material was used in a sublayer under the 1,200-vehicle parking lot.
“We worked with a Green Globes consultant all the way through and ended up with a better building,” Westover says. 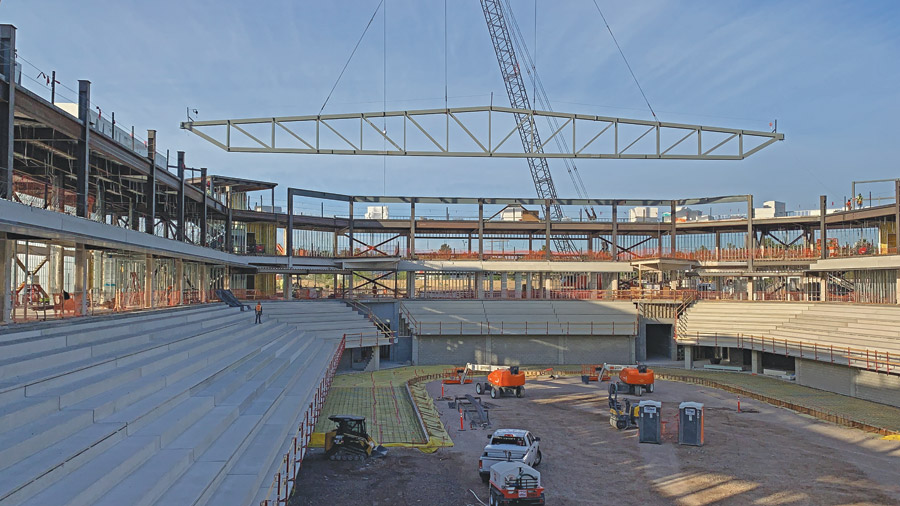 Developing the center during the pandemic might have helped speed the project and keep costs down.

Because of social distancing, “we all had experience with Microsoft Teams and that turned out to be an advantage,” says Westover. “It opened people’s eyes to other ways they can be more productive. Everyone from the city to the general contractor to subcontractors and vendors saw the need to buy into the overall effort, and they absolutely did.”

Because the $84-million project pushed ahead in 2020 when the economy was cooler, Westover says it was spared some of the cost pressures bedeviling today’s market.

“If we were to go out on the street today, it would cost us an estimated $35 million to $40 million more,” he says.