With the Nevada state Legislature pushing the accelerator, NV Energy will ramp up its efforts on the largest extra-high-voltage transmission line project in Nevada history.

The $2.5-billion Greenlink Nevada project aims to strengthen the electrical grid, reduce carbon emissions, promote renewable energy development and position the state as a major exporter of clean energy. It calls for approximately 580 miles of 525-kV lines that will link Las Vegas and Reno with new solar fields and geothermal plants.

The proposal got a boost in the waning hours of the 2021 Nevada legislative session with the Memorial Day passage of Senate Bill 448, a wide-ranging measure that speeds the state’s turn toward clean energy production and the use of electric vehicles. In return for a streamlined approval process, the legislation calls for completion of Greenlink Nevada by 2028, about three years ahead of the company’s announced schedule. 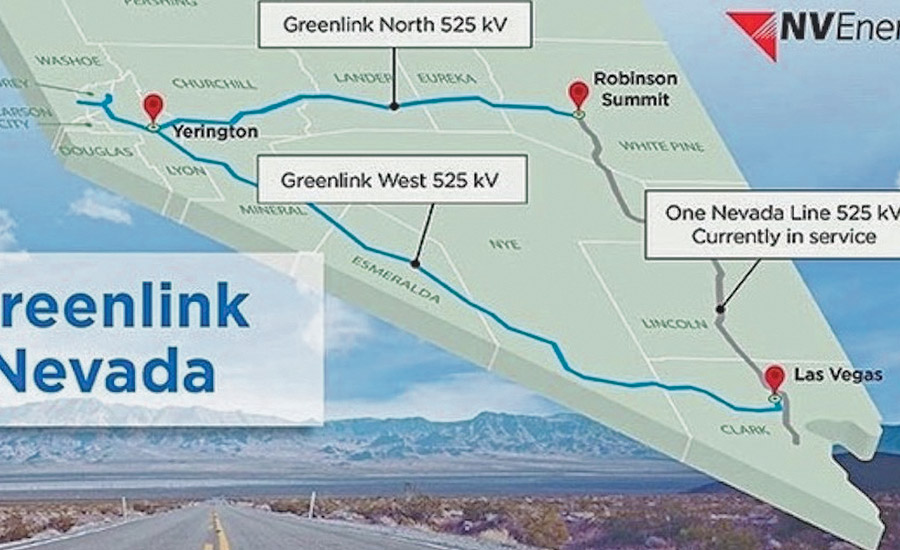 When he signed the bill on June 10, Gov. Steve Sisolak said it will “help secure Nevada’s place as a leader in renewable energy while helping us reach our climate goals and create jobs.”

The Berkshire Hathaway Energy-owned electric utility, which serves Las Vegas, Reno and much of the rest of the state, announced the project in early 2020 and received regulatory approval this spring to begin construction of the first phase.

That includes construction of a substation southeast of Reno at Yerington and a 525-kV line into the city, linking to the solar fields in the Amargosa Valley 300 miles to the south. Construction is scheduled to begin in 2024 and finish in 2026.

The second phase was already in the preliminary design and permitting stage when lawmakers voted to speed up the project. SB448 moves up the second phase to begin construction in 2026 and be completed by 2028, subject to regulatory approval.

“This is an ambitious schedule for permitting and construction,” says Carolyn Barbash, NV Energy vice president for transmission development and policy, who quickly adds that she’s confident the utility can deliver.

“In Nevada, there is broad support for this important project,” she says.

The transmission lines are expected to allow for the development of 5,000 MW of renewable energy projects, according to the utility, as the state moves to meet its goal of net-zero greenhouse gas emissions by 2050. Putting the system in place could attract $10 billion in private investment in renewable energy, says state Sen. Chris Brooks, (D-Las Vegas), who sponsored the legislation. 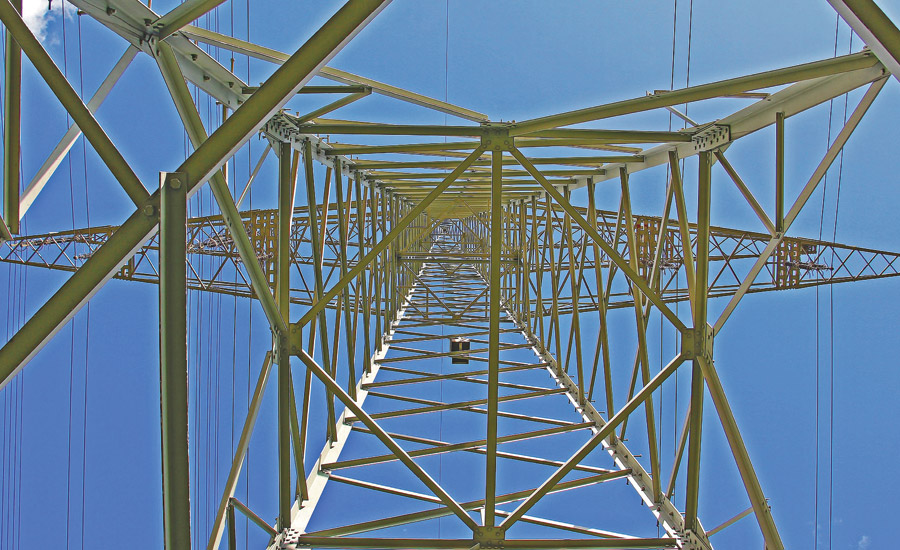 The additional capacity that Greenlink Nevada promises is welcome news in Reno, which is in the midst of a manufacturing and tech boom.
“We are addressing our power needs for the long term,” says Mike Kazmierski, president and CEO of the Economic Development Alliance of Western Nevada. “It will help us address our growing needs and make green energy more accessible.”

Since the end of the Great Recession, the Reno area has attracted Tesla and Panasonic to the Gigafactory in nearby Storey County as well as becoming home to power-hungry data centers used by Apple, eBay, Google, and Switch.

Many of these tech businesses make their investments contingent on access to renewable energy, such as Apple’s purchase of energy from Turquoise Solar, a 61-MW solar plant at the Reno Technology Park that went online earlier this year.

The city has benefited even more as companies shorten supply chains and boost onshore production in response to the pandemic and trade disputes, says Brian Bonnenfant, project manager for the Center for Regional Studies at the University of Nevada, Reno.

“We’re on a trajectory for two, three or four decades of growth as companies build parallel supply chains and data farms powered by Nevada’s rich renewable energy potential,” he says. “And it’s good to see government has moved.” 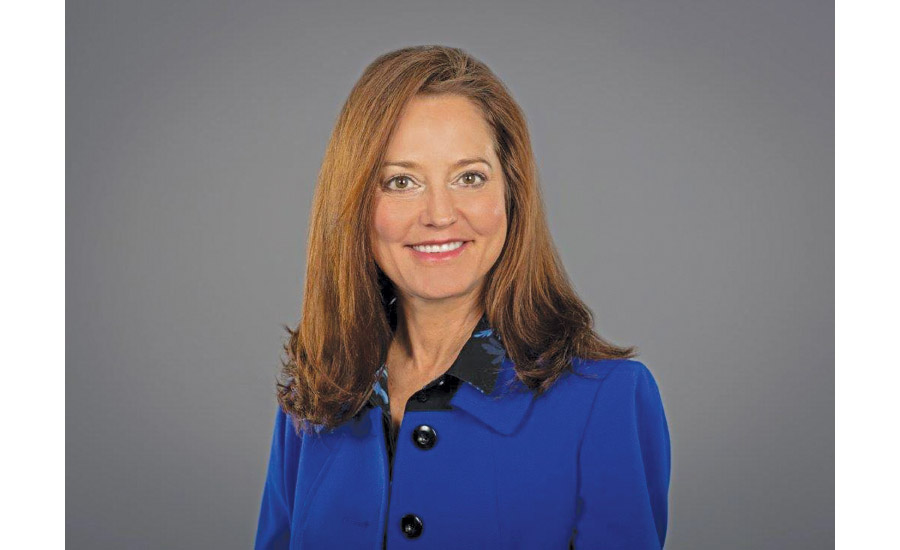 “In Nevada, there is broad support for this important project.”
— Carolyn Barbash, Vice President for Transmission Development and Policy, NV Energy

Greenlink Nevada promoters envision the project as a catalyst for the state—which boasts 200-plus sunny days a year and active geothermal resources—to become a clean-energy exporter. The new lines will be located in federally designated western energy corridors, which connect states throughout the region.
The second phase of the project will travel east to west, generally along U.S. Highway 50 from central Nevada to Reno. The two phases will connect with the existing One Nevada line from Las Vegas into central Nevada, creating a triangle of high-capacity lines running through the middle of the state.

“Since announcing our plans for the Greenlink Nevada project, we have seen a renewed and increased interest from potential renewable-energy developers to connect to the grid,” Barbash says.

The utility, which has yet to make a rate filing in connection with the project, says it plans to offset the cost of investment in Greenlink Nevada with reduced energy costs from more efficient renewable energy sources.

“NV Energy has a great track record,” Barbash says, pointing out that electric rates in Nevada are lower today than in 2009 despite grid and capacity expansion and the retirement of coal-fired plants. “There are very few things I can think of that cost less today than they did 10 years ago.”

Construction of the union built project is estimated by NV Energy to eventually generate $690 million in economic activity and support nearly 4,000 jobs.

An International Brotherhood of Electrical Workers official predicts “transmission work will ramp up” nationally with the current focus on infrastructure, but Greenlink Nevada should not face staffing concerns because it’s further along in development. 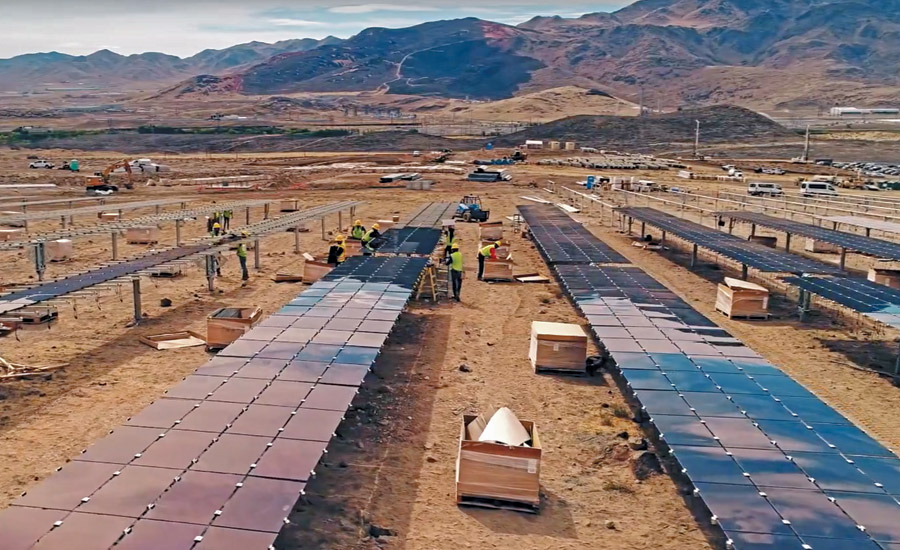 “Greenlink is one of the first transmission infrastructure projects moving forward in the country,” says Hunter Stern, assistant business manager for IBEW Local 1245.

The project’s focus on strengthening Nevada’s clean-energy infrastructure heartens some in the environmental movement—to a point.

Patrick Donnelly, Nevada state director for the Center for Biological Diversity, says the group is “all in” on the move away from fossil fuels, but he’s concerned about the environmental impact of the project, particularly the northern leg linking Reno and rural Nevada.

With more than 90% of Greenlink Nevada traversing federal land, Donnelly says Bureau of Land Management regulators should take a big-picture view of the impacts that come with the development of power-generation facilities adjacent to Greenlink Nevada’s transmission lines.

“There is no spatial planning going on,” he says. “The BLM never takes a systematic look at these things; they look at it on a project-by-project basis.”
Donnelly promises that his group will “be the ones in court trying to fight the bad projects after the permits are granted.”

That said, he understands the economics behind Greenlink Nevada and the clean energy the lines will carry. “There’s a tidal wave of demand,” Donnelly says. “Everyone’s going to have to secure renewable energy.”