This website requires certain cookies to work and uses other cookies to help you have the best experience. By visiting this website, certain cookies have already been set, which you may delete and block. By closing this message or continuing to use our site, you agree to the use of cookies. Visit our updated privacy and cookie policy to learn more.
Home » Hospital Stuck Between Hard Rock, Remote Location
SouthwestSouthwest Construction Projects
Digging Deeper | Health Care

When the $65-million Covenant Health Hobbs Hospital is complete this summer, it will fill an important need for a large-scale hospital in the rural community of Hobbs, N.M.

The project stems from a partnership between Hoar Construction and Covenant Health. The team wanted to create a modern facility in Hobbs, where the population has increased 20% in the past decade and the nearest hospital that offers comparable care is two hours away.

“Many folks in eastern New Mexico travel to Texas for their health care,” says Kelly McDaniel, vice president of Covenant Health in Lubbock, Texas. Among those traveling for care were women who would cross state lines so they could deliver their babies in Texas, where more women’s health care services were available.

“Our goal is for them not to have to travel outside their home state to get care,” McDaniel says.

The 60-bed Hobbs facility will replace the existing Lea Regional Medical Center to become the area’s largest community hospital. It features a patient tower, an emergency department, an intensive care unit and operating rooms. It also will feature a dedicated women’s center offering labor and delivery, obstetrics and mammography services.

E4H Environments for Health Architecture is the hospital’s designer, and AG&E Structural Engenuity of Addison, Texas, is the structural engineer. Synergis Development Partners of Dallas is the developer. The project broke ground in January 2021 and topped out in August. 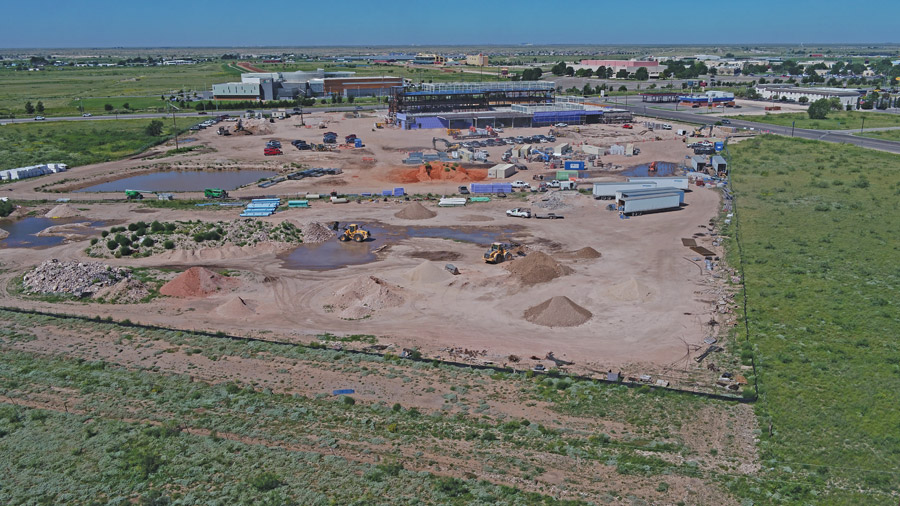 Building the 109,000-sq-ft facility has been a monumental task that included onsite excavation of hard caliche rock across the 27-acre site.

“The site has been the biggest thing,” says Ben Carmichael, senior project manager for general contractor Hoar Construction, based in Birmingham, Ala. “All of the site conditions in eastern New Mexico and the panhandle of Texas [involve] caliche rock. It’s a really hard, compacted surface.”

Hospital construction calls for installation of numerous utility connections. Getting those utilities to the site first required breaking up the caliche rock. In some spots, utilities that would feed the hospital were located 17 ft underground, but an excavator alone could not punch through the rock.

“We’ve had to dig thick trenches and use a [hydraulic] hammer hoe to break up the rock, install the utilities and cover it back up. It’s just a slow process,” Carmichael says, adding that utility installations took twice as long as they normally do because of the hard rock.

“We’ve had to dig thick trenches and use a [hydraulic] hammer hoe to break up the rock. … It’s just a slow process.”
—Ben Carmichael, Senior Project Manager, Hoar Construction

The team had no way of knowing exactly how deep the rock was until crews started digging. And because of the size of the site, the rock depths fluctuated significantly. “In some spots on the site, it’s a foot deep, and in other parts, it can be 5 to 6 [feet],” Carmichael says.

The building’s concrete footings were designed to bear directly on a caliche rock stratum. However, during excavation, the team discovered that for about one-fourth of the footings, the layer of caliche rock underneath started much deeper than anticipated, meaning there was a gap between the footing and the rock that would support it.

“We worked closely with the geotechnical engineer to come up with a solution and redesign the affected foundations during construction,” says Hannah Hansing, associate principal with AG&E Structural Engenuity. Carmichael says the solution was to place concrete to fill the space between the rock and the bottom of the footing. Left with large chunks of caliche rock and huge trenches to fill, the project team opted to crush and reuse the rock as a sustainable alternative to hauling in new material. Crews set up processing equipment on site to finely crush the rock for filling the trenches.

With multiple excavations underway at any given time and several open trenches, some as deep as 20 ft, jobsite safety became a major concern. The contractor performed weekly site audits and required all subcontractors to complete a daily pretask safety analysis. Despite the site’s many precarious elements, Carmichael says the project has had zero reportable accidents. 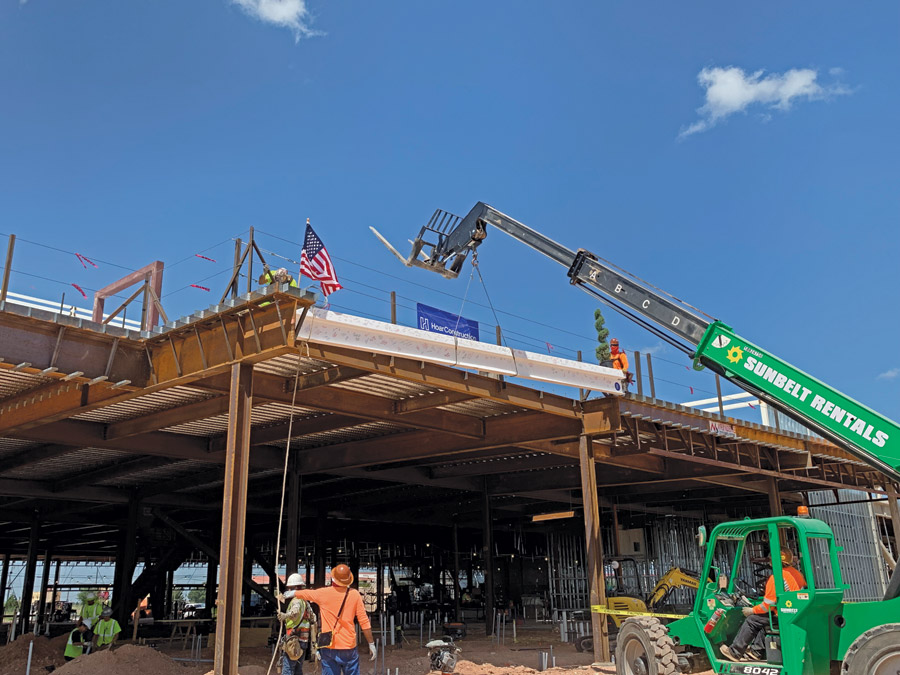 milestone Crews placed the final beam to top out the Hobbs hospital project in August 2021, only eight months after groundbreaking.
Image courtesy of Hoar Construction

The added challenges of weather delays and industry-wide shortages in skilled labor and materials meant that the project team had to plan and execute each task carefully. Tight scheduling added another layer of complexity, and some carefully timed decisions played to the project’s advantage.

Hoar Construction won the contract in early December 2020 and was asked to begin work only four weeks later. The contractor had to work quickly to coordinate contracts, shop drawings and steel deliveries. “It was a big struggle to get stuff in there in time with such a quick start,” Carmichael says.

Crews soon faced another challenge. During the first week of construction, a foot of snow fell on the site. Combined with the design delays for the structural footings, the project’s completion—originally scheduled for April 2022—had to be pushed back by about two months. 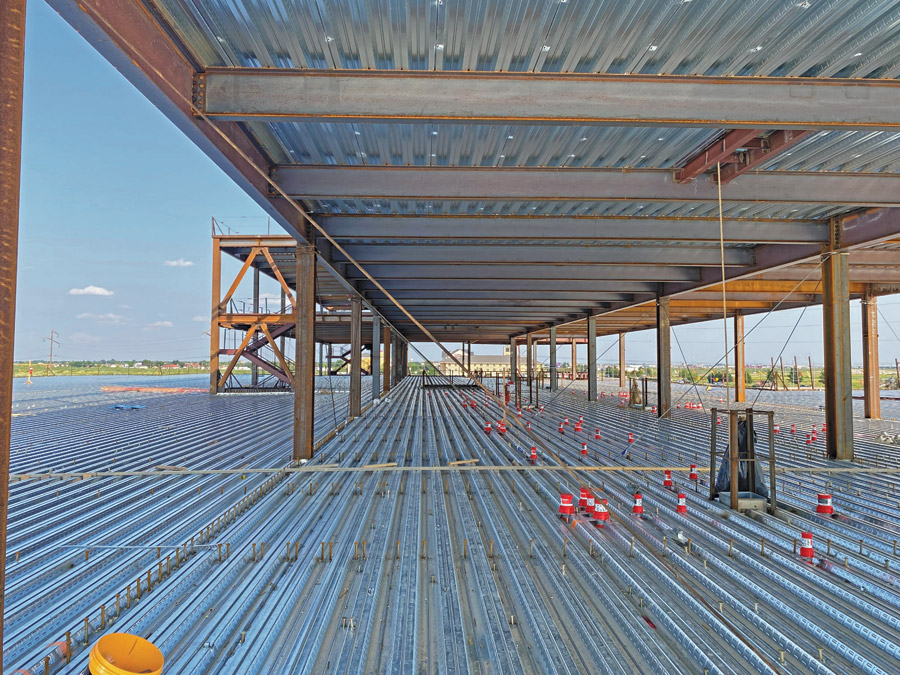 Steel prices rose 10% in the four weeks between the contractor winning the job and starting construction. More than 760 tons of steel were used to build the hospital.
Image courtesy of Hoar Construction

Meanwhile, supply-chain slowdowns made materials more expensive and harder to come by. Roofing manufacturers were facing six-month delays for materials. The Hobbs hospital project team was able to cut those delays in half by mixing and matching different products. Installation of a temporary roof also helped keep the project on schedule.

Another time-saver came from the project’s steel erector, Steel Masters of Houston. Working full shifts nearly seven days a week, erector crews managed to place the project’s 760 tons of steel in one month.

In the short amount of time between Hoar winning the contract and starting the job, steel prices shot up 10%. But the contractor headed off other price increases by locking in orders early with suppliers. “Had we waited three or four months, we probably would have had a 20% increase,” Carmichael says.
All told, the project used more than 760 tons of steel, 850,000 ft of electrical wiring, 250,000 ft of conduit and nearly a half-million lb of rebar.

Finding enough skilled labor to support the job in a rural area was difficult. Hobbs has a population of about 40,000 people, with the nearest towns being Lubbock, Texas, and Carlsbad, N.M. “We partnered with a lot of trades across the country, mostly the Southeast and Midwest. They sent whole crews that would find housing around the job,” Carmichael says.

Along with scrambling to find labor, the project team had to quickly find a solution for an unexpected discovery made halfway through construction of the building pad. While preparing to fill in an old trash pit, workers unearthed eight 30-yd-long dumpsters full of tires that had to be removed. “We removed the dumpsters in two days and were able to stay on schedule and not have any delays,” Carmichael says. 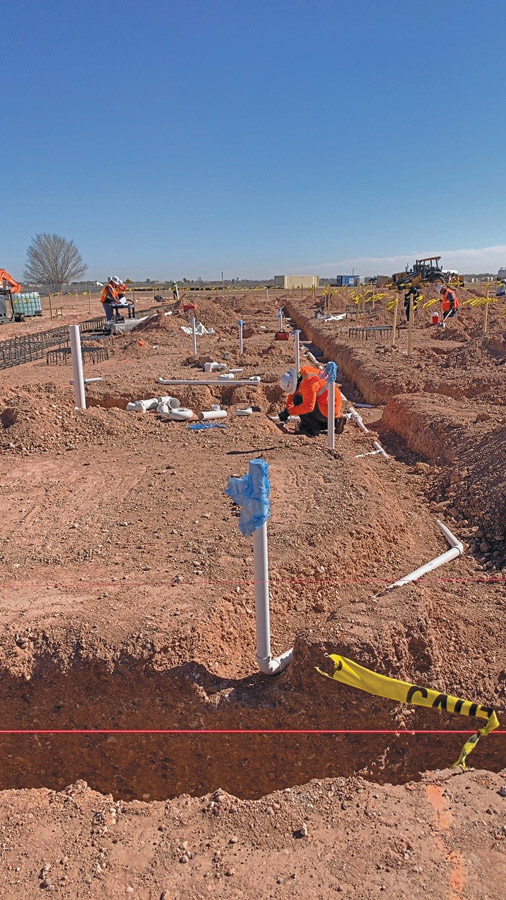 Crews dug deep trenches across the hospital site to unearth the hard rock and install utilities. Workers had no way of knowing exactly how deep the rock layer was until they started digging.
Image courtesy of Hoar Construction

Jeff Sudman, associate partner for E4H Environments for Health Architecture, says the firm designed the Hobbs facility from a regional hospital prototype and modified it to accommodate the new functional spaces that Covenant requested.

“Basically, we took the best-tested concepts from the previous projects and added in our new functionality to create the hospital for Hobbs,” Sudman says.

Among the changes, the firm designed a direct connection from the emergency department to the imaging and lab areas to make it easier to treat and diagnose patients quickly. The original plans for the hospital called for a smaller facility with some built-in shell space to accommodate future expansion. Partway through the design, Covenant had the opportunity to purchase a nearby hospital facility. This meant the team had to redesign several functional spaces and add new ones that were not part of the original design.

“Thankfully, their foresight to provide shell space for expansion meant we went to full build-out and were able to accommodate the new requirements without any major redesign of the building,” Sudman says.

“We’ve had to dig thick trenches and use a [hydraulic] hammer hoe to break up the rock. … It’s just a slow process.”
—Ben Carmichael, Senior Project Manager, Hoar Construction

To marry the changing design with structural integrity, the team had to put extra thought into placement of the building’s steel-braced framing system. “The braced frame locations were coordinated to avoid conflicts with the architectural floor plans, in some cases requiring horizontal and vertical offsets between levels,” says AG&E’s Hansing.

For the interior, designers found inspiration in the New Mexico horizon and created angles to resemble the oil rigs that dot the landscape. “All design choices were drawn from the New Mexico region and keeping in touch with the more traditional [Covenant Health] design aspects,” says Lindsey Norton, LEED Green Associate with E4H Environments for Health Architecture. “The materials and colors speak to earthy tones that create calming environments for patients and doctors.”

To handle the building’s many angles and curves, “several portions of the perimeter required careful coordination with the architect to ensure the structure aligned with the final architectural finish,” Hansing says.

Construction is about 75% complete, with work remaining on the exterior and interior finishes. The project is scheduled to wrap up this summer.

Barge Is Key to Fixing Valves at Remote Dam