This website requires certain cookies to work and uses other cookies to help you have the best experience. By visiting this website, certain cookies have already been set, which you may delete and block. By closing this message or continuing to use our site, you agree to the use of cookies. Visit our updated privacy and cookie policy to learn more.
Home » Longtime Engineer, Academic Known as Problem Solver
CaliforniaNorthwestCalifornia Construction NewsNorthwest Construction News
Legacy Award | Industry Leaders

After a storied career as an Army Corps engineer, John Schaufelberger became an academic and wrote 10 textbooks

When John Schaufelberger joined the Army Corps of Engineers in the 1960s and began working on construction projects around the world, he wasn’t just building cities and tunnels and levees. He was constructing a future he didn’t know about yet.

Schaufelberger’s 30-year military career taught him the value of building relationships as he brought together people from different countries and industries as well as the public and private sectors to achieve common goals. After retiring from the Army in 1994, he launched a new career as a professor and author while serving in leadership roles for associations representing the construction industry and education. He now serves as dean emeritus of the College of Built Environments and professor emeritus for construction management at the University of Washington.

To this end, Schaufelberger has spent decades serving on boards, leading task forces, judging engineering competitions and tirelessly lending his expertise to organizations like the Schools of Construction (ASC), the Associated General Contractors of America (AGC) and the American Council for Construction Education (ACCE).

Unable to find a suitable textbook to teach construction equipment management when he first arrived at the University of Washington, he wrote his own and went on to publish nine more construction textbooks on everything from cost estimating to leadership and ethics. 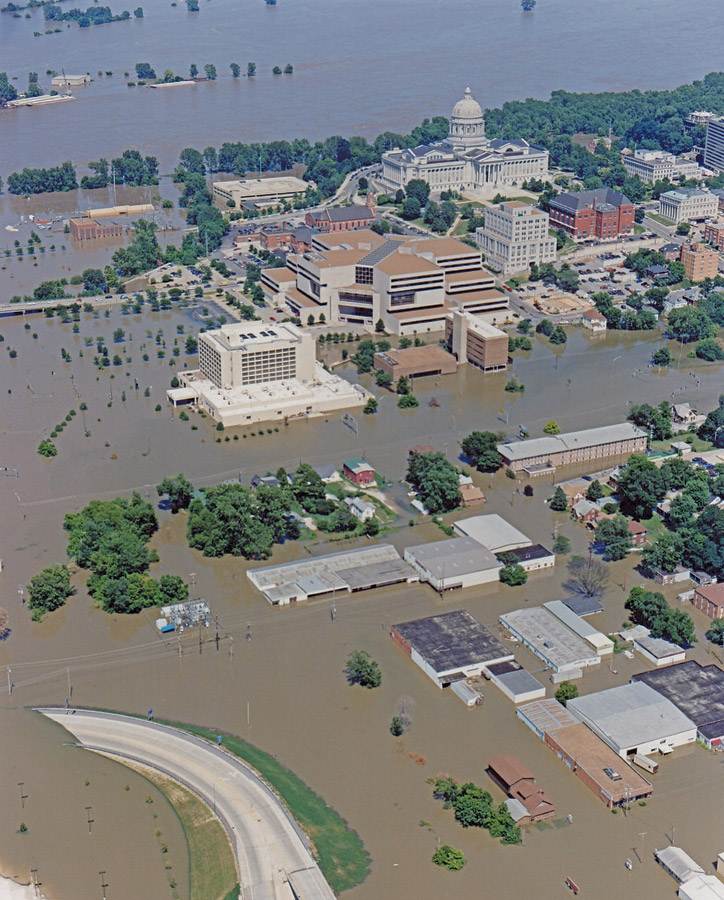 Schaufelberger grew up in southern Idaho, the son of an electrical engineer at a power company, and he in turn studied electrical engineering at the University of Idaho. Upon graduation, he joined the Army Corps of Engineers, heading to Korea for his first assignment. And in the corps he would remain, picking up a master’s degree as well as a PhD in civil engineering and attending a Harvard University fellowship. Schaufelberger also taught cadets at West Point in the 1970s to pay for his graduate education.

In 1983, he arrived in Saudi Arabia to help build King Khalid Military City, a brand new metropolis with a population of 75,000 near the Kuwaiti border. The scale was immense; at the height of construction, 35,000 people were working on the project, placing $3 million worth of construction per day, Schaufelberger says. The entire city was built with precast concrete, and with summer temperatures rising to 130 degrees, most of the concrete was placed at night, with trucks carrying ice instead of water in the mixture. 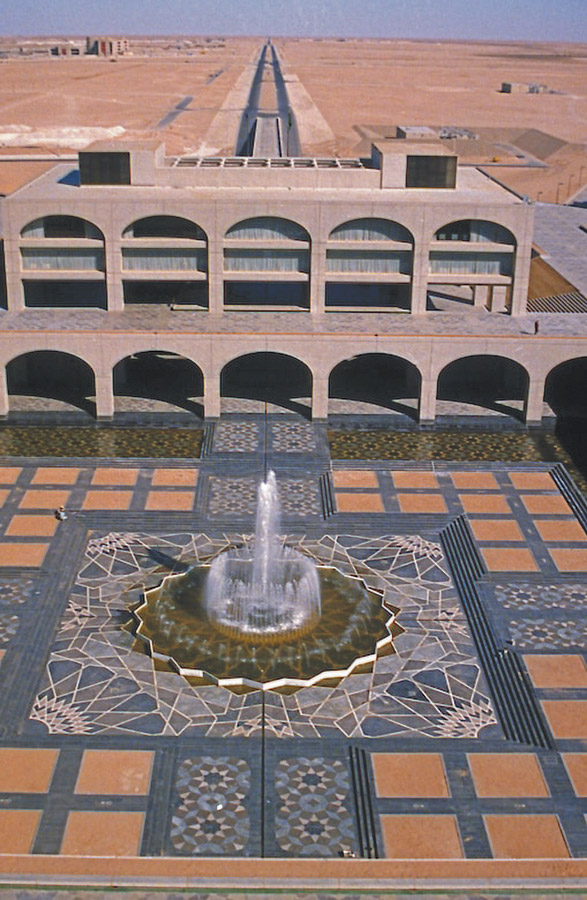 Schaufelberger led a diverse team of different nationalities and levels of expertise in the 1980s to build King Khalid Military City, a metropolis of 75,000 in Saudi Arabia.
Photo courtesy of U.S. Corps of Engineers

As a lieutenant colonel and area engineer for construction, Schaufelberger faced an array of challenges, from figuring out ways to dispose of contaminated waste to convincing some crews not to work seven days a week. He also guided a group of young Saudi engineers who had received their educations overseas and returned to their country to help lead the building effort. Whenever these young men saw design problems or other issues, they would write Schaufelberger about their solutions.

“They would send me these very strange letters,” he says, “and I had a Jordanian who worked for me who would translate them in English.” The men often worked late at night, so Schaufelberger would head over to their offices at about 5 p.m. to drink tea and talk about the issues.

Back in the U.S., Schaufelberger served as contracting officer for an ambitious tunnel project in San Antonio. The tunnels were designed to receive extra water from the San Antonio River during floods, with huge pumps to bring the water up again during periods of low river flow. The challenges were many: The boring machine needed to be reconstructed over the first four or five months, causing disruptive delays, and Schaufelberger increasingly found himself in a public role, answering questions about hiring locally and explaining the work as it progressed.

Schaufelberger’s last major operation with the Army involved flood recovery projects on the Missouri and Mississippi rivers after a 100-year flood event in 1993. At its peak, the flood created a lake 10 miles wide where the two rivers meet. While the levees protecting cities mostly held, hundreds of irrigation levees protecting farmland failed. Schaufelberger received $100 million for flood recovery—mostly levee reconstruction—and finished the project with $10 million to spare. And again, he found himself in the public eye.

“Every congressman and senator wanted to know what I was doing,” Schaufelberger says. “You really had to keep the public informed. There was a lot of public interest, and a lot of controversy over the management of the river anyway. The people upstream were worried about recreation. People downstream were worried about navigation, both of which were impacted by the floods.” 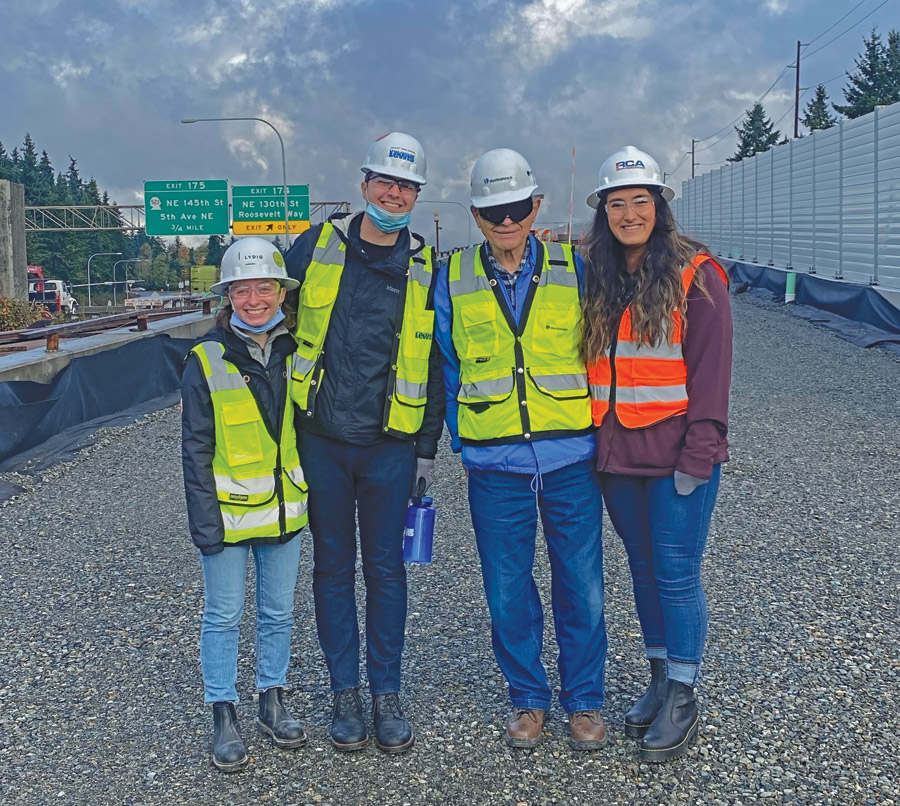 After mandatory retirement from the Army in 1994, Schaufelberger, then 52, had to decide what to do next. Positive memories of teaching at West Point prompted him to apply to the department of construction management at the University of Washington. After seven years as a professor, he was invited to become department chair, and then dean. Schaufelberger continued to teach and write, applying his military training and lessons learned from projects all over the world.

“Academia is totally different than the military because in the military, everybody’s together. In academia, each faculty member is independent,” he says. “But making a decision has never been hard for me. Doing nothing is not a course of action, in my opinion, but that’s not typical in academia.”

“But making a decision has never been difficult for me. Doing nothing is not a course of action.”
—John Schaufelberger

Such leadership and communication skills apply to any construction project, Schaufelberger says. “We teach the technical skills, but that’s only half of the skill sets they need. The other half are how to deal with people because construction is very collaborative. You’ve got people from many different entities, maybe subcontractors, buyers, contractors, all working together. And they all come from different companies, and they have different cultures. Somehow, you’ve got to get them all together going in the same direction. But you’ve got to take care of them, understand them and listen to them.”

Cameron Bell entered the University of Washington to study civil engineering, but Schaufelberger’s classes sparked an interest in construction management. He is now a construction manager at Northwest Construction Inc. and frequently works with his former professor on industry panels, events and competitions.

“John got me excited about wanting to take on a challenge and never being afraid to take on new challenges,” Bell says. “For me, that is super important in our industry because of all the unknowns and the fact that no two jobs are the same. It’s easy to find yourself in uncomfortable situations, but he taught me that’s an opportunity to do something great and to not be afraid.” 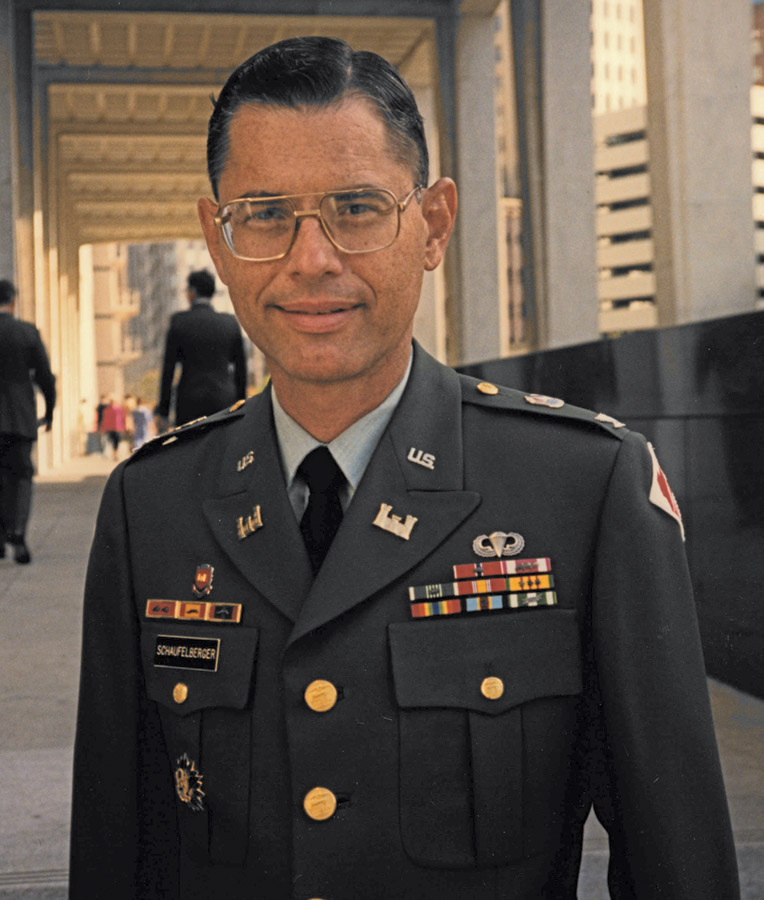 Schaufelberger joined the Army after graduating from the University of Idaho. During his service, he built projects around the world, earned a PhD in civil engineering and taught at West Point.
Photo courtesy of U.S. Army

One of the biggest challenges the industry faces, Schaufelberger believes, is the shortage of a skilled workforce. In the 27 years since he retired from the Army, he’s worked to strengthen and promote construction education, taking numerous leadership roles in the industry. At the Associated General Contractors, Schaufelberger joined the board of the AGC Education and Research Foundation, chaired the AGC Foundation’s case study task force and served on its industry residency task force. He has also served on the board of AGC of Washington and the AGC of Washington Education Foundation. He became active in the American Council for Construction Education (ACCE) in 2002, serving on the board and leading the accreditation committee from 2012 to 2017. He currently serves as ACCE board chairman.

“John’s a builder of people who isn’t confined to a singular area,” says C. Ben Farrow, a professor of architecture and associate dean at Auburn University. Farrow also serves as president of the Associated Schools of Construction, where Schaufelberger has mentored, developed and supported teachers, faculty and other leaders at construction schools around the world.

“One of John’s great strengths is his ability to connect with people,” Farrow says. “He can really understand where that person is, and then help that person almost self-realize some of the challenges ahead and some of the things that they should be thinking about.”

Engineer Stands as Tall as His Buildings

John Aho: Engineer Pushed for Seismic Safety in Alaska Ahead of 2018 Earthquake