The holiday gift to clients is a time-honored tradition for professional firms. After founding the company that bears his name in Houston 50 years ago, John Kirksey followed this practice for a while. Eventually he came up with an idea for how to both recognize his business relationships while conveying his passion for environmental stewardship.

So he began sending clients trees wrapped in burlap. These were certainly unique and memorable. They would also improve the environment in a small way. Eventually, he began planting trees on his clients’ behalf and mailing them cards explaining the gift.

It was a practical solution for an idealistic impulse. And it grew in scope until Kirksey Architecture launched an annual tree planting event in 1986. Each December, the firm’s employees plant hundreds of saplings as a gift to both clients and the city of Houston. To date, the firm has planted more than 11,250 trees.

The successful fusion of an idealistic goal with a practical solution reflects Kirksey’s skill at melding professional success and ecological stewardship; it is a trait that has made him stand out in his field. Over the past half-century, he has built a reputation as one of the leading architects in the Houston area as well as one of the region’s most prominent voices for sustainability and environmental stewardship.

“John has always been a visionary leader,” says Wes Good, president of Kirksey Architecture, “Not just because he had big ideas and plans, but by his nature, he compelled people to go out and do it.” 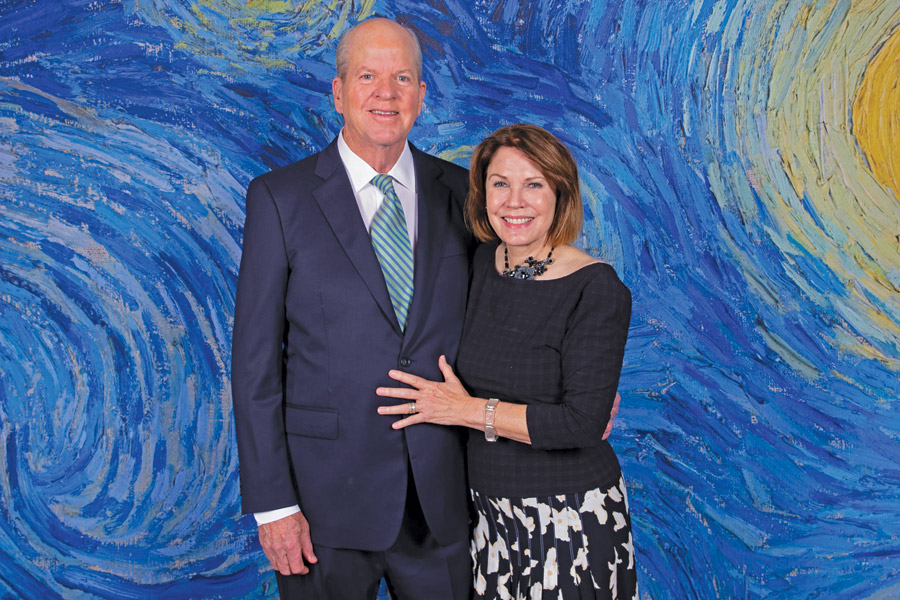 John Kirksey with his wife, Kyle. Kirksey was presented with the Associated General Contractors (AGC) of Houston's Master Builder Award for 2020, and is only the second architect to be so honored by the AGC in their history.
Photo courtesy of Kirksey Architects

Kirksey founded his company in 1971, when he was 24 years old and fresh out of college. Today, Kirksey Architecture has more than 150 employees and topped $62 million in revenue in 2019. The average construction value of the firm’s projects between 2016 and 2019 was $800 million.

“Our success was built on a lot of people’s talent,” Kirksey says. “I had to respect my own limitations and give people a path to develop what they were good at.”

That leadership and ability to persuade people to do things that improve the world around them extends to Kirksey’s passion for the environment. Kirksey helped found programs and organizations such as Freeways to Treeways, the Galveston Bay Foundation and the Coastal Conservation Association of Texas.

He has served on the Advisory Board for Houston Wilderness since its inception. He received the group’s Wild Life Award recognizing his efforts to protect and promote the 10 diverse eco-regions around Houston, Galveston Bay and the Gulf of Mexico.

Kirksey grew up in Harlingen, Texas, which he described as “a cornucopia of outdoor activities.” His love of the outdoors was matched by his entrepreneurial spirit early on. As a teenager, he purchased several surfboards and started a rental business for aspiring wave riders on South Padre Island.

After graduating from the University of Texas, he took a job with a large architecture firm in Houston. Not long after, his brother put him in touch with a client needing a design for an apartment complex in Houston. Kirksey enlisted the help of some other young architects and completed the project. That led to other opportunities and, eventually, Kirksey decided to go out on his own. 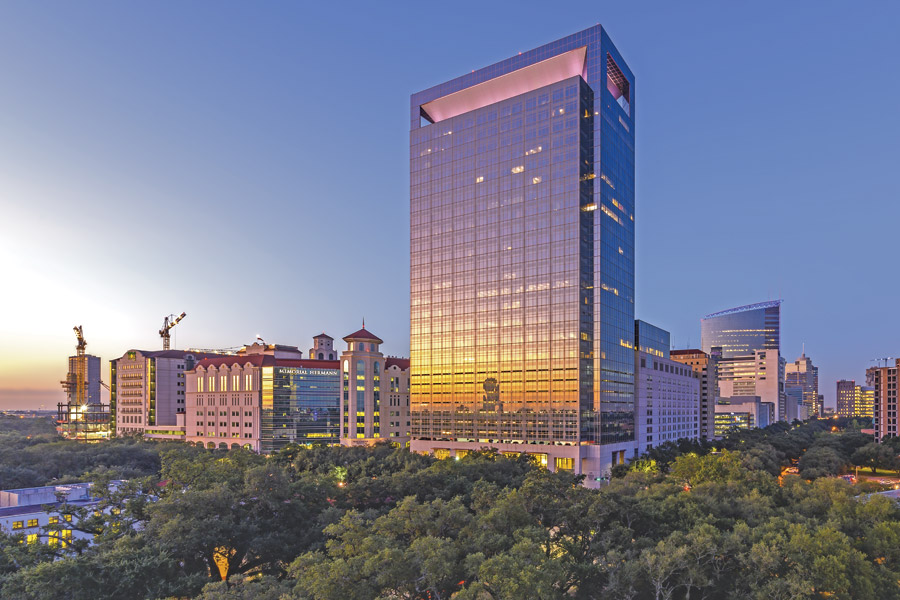 Kirksey was the architect for the 35-story Memorial Hermann Medical Plaza in the Texas Medical Center, one of the nation’s largest and most prominent medical office buildings.
Photo courtesy of Kirksey Architects

Without a preconceived idea of how a company should work, Kirksey let the company grow organically. This allowed the company to be nimble and take advantage of opportunities that emerged, rather than try to fit a given mold of what “should” be done.

David Harvey Jr., co-chairman of the board for Harvey | Harvey-Cleary Builders, describes Kirksey as a “one of a kind” leader. He and Kirksey have worked together on projects in Houston for more than four decades.

“He built a very talented team,” Harvey says. “They have a lot of strong people who develop and nurture relationships.”

The keys to Kirksey Architecture’s success seem obvious: build a strong client base, maintain a good name and avoid debt. More importantly, he understood the key to a vibrant workplace—hire talented people and let them do the work that interests them most. It also helped that he wasn’t bound by the conventions most established firms felt were required.

“John has always been a visionary leader. Not just because he had big ideas and plans, but by his nature, he compelled people to go out and do it.”
—Wes Good, President, Kirksey Architecture

What emerged out of this approach was a team that was diversified across many different fields. In the 1990s, the company moved to a teams-based model. Each team would be involved with a specific market segment and develop an expertise in that area. Groups within the firm found projects involving higher education. Others did so with science and technology, while others focused on health care.

The approach encouraged a diversity of talent across the company as well as diversity throughout the client base. The upshot was greater stability for the company, Good explains.

Kirksey’s philosophy of empowering his employees was made dramatically evident in 2014. At that time, the firm’s billings totaled $50 million, and Kirksey owned 100% of the company’s stock. It had been run on an “open book” basis to ensure transparency, but Kirksey felt it was insufficient. He restructured the firm by transferring ownership to the 28 current vice presidents. Since that time, the company has been managed by a seven-member management committee.

“This ownership expansion represented a generous investment in the next generation of leadership at Kirksey and has allowed us to retain talent and continue to cultivate the foundation of knowledge within the firm,” Good explain. 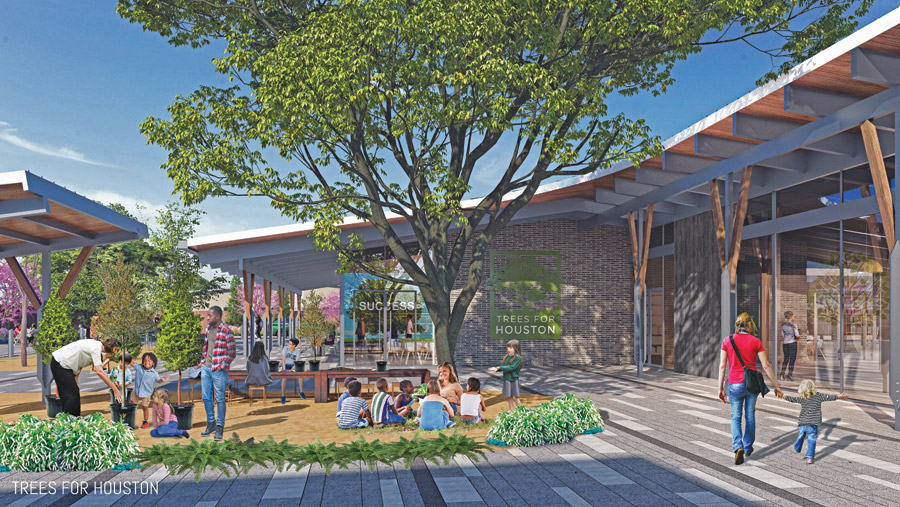 In 1986, an effort led by Kirksey to plant trees along Richmond Avenue in Houston led to the creation of Trees for Houston, which is now the largest urban tree planting organization in the country.
Photo courtesy of Kirksey Architects

While he was building his professional practice, Kirksey continued to be concerned about environmental issues. In the early 1980s, Kirksey’s interest in conservation led him to begin studying the problems of global warming and climate change, which, at the time, were only beginning to be understood.
“I looked around at places like Galveston Bay, and I could see it changing before my eyes,” he says. “What was happening was not sustainable.”

He resolved to learn more. Resources on the topic were scarce, but those that existed pointed to a growing problem. Not long afterward, he began providing presentations on the topic to increase awareness.

“He brought credibility to ideas and insights that may have been seen as outlandish at the onset but seem obvious on hindsight,” says Barry Ward, executive director at Trees for Houston.

Case in point—trees along the freeways in Houston. On trips to the East Coast, Kirksey was struck by the surfeit of trees in urban areas. In many places, undevelopable hills were covered in trees, which was a rarity in Houston, where most of the topography was flat. But the green spaces along highways seemed an opportunity to him. Why not plant trees in the empty areas? Not only would it beautify the city, but it would also be an opportunity to spread awareness about conservation. 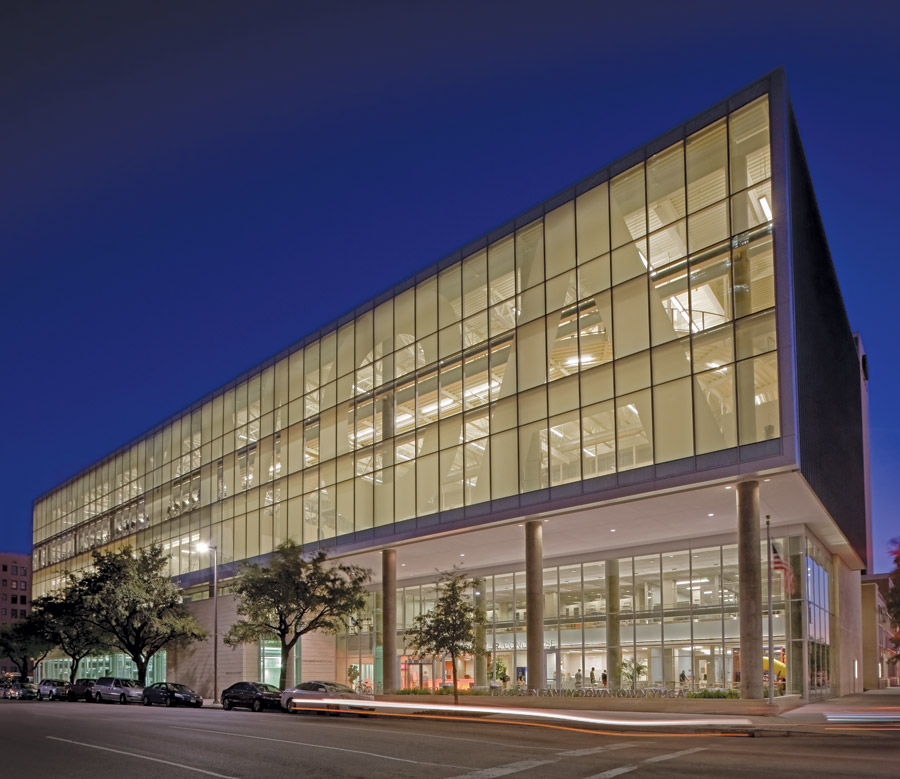 The Tellepsen Family YMCA is the largest YMCA of Greater Houston. The building replaced the former 1941 facility and serves the needs of a revitalized downtown. To increase the YMCA's visible presence downtown, Kirksey created a window to the community.
Photo courtesy of Kirksey Architects

“The best way to convince people is by getting them to do things like planting trees,” he says.

Kirksey championed the effort to introduce trees to the empty medians and eventually convinced agencies such as the city of Houston and the Texas Dept. of Transportation to adopt the approach.

What emerged was Trees for Houston, which is now the largest urban tree-planting organization in the country. Since 1983, the nonprofit has planted more than 600,000 trees across the region.

“At the time, it was something that was bureaucratically impossible,” Ward says. “Today, we take it for granted.”

Kirksey extended his emphasis on ecological stewardship into his professional pursuits as well. His company looked for ways to emphasize sustainability in the buildings it designed without sacrificing the practical needs of the client. They found that environmental-focused designs could make buildings that were more enjoyable to use while being less costly to maintain. The firm quickly gained a reputation within the industry for its environmental focus.

“[Kirksey] brought credibility to ideas and insights that may have been seen as outlandish at the onset but seem obvious on hindsight.”
—Barry Ward, Executive Director, Trees for Houston

“His approach was not radical in any way,” Good says. “It was very pragmatic and realistic.”

The emergence and growth of the LEED certification system in the 1990s proved the practicality of the strategy. Kirksey embraced LEED and, to date, has provided LEED documentation on over 38 million sq ft of projects across the U.S. The firm is the first and only Houston-based firm to be designated a LEED Proven Provider. Kirksey team members also began training other professionals within the industry for LEED certification.

In 2019, the company worked with the Texas Coastal Exchange to purchase carbon storage from 386 acres of marshlands along the Texas Coast, allowing Kirksey to become carbon-neutral in its operations.

And when Kirksey began to emphasize the importance of sustainability, that strong sense of trust gave his views a cachet and special importance few others could match.

“He’s a humble person, but he also has courage,” Harvey says. “There is a tremendous amount of respect for him because of that.”