Using a modified method, Shimmick’s Legacy Foundations restarted work on the troubled perimeter pile upgrade of the ailing Millennium Tower in San Francisco. The latest installation works with both the current approved scheme for 52 piles and a proposed fix, under city review, with as few as 18 piles. The reduced-scope revise is intended to achieve the same goal—fix most of the settlement and tilt of the 645-ft-tall residential building.

The San Francisco Dept. of Building Inspection (DBI) aims to finish its review of the proposed revise, which would require a new permit, by Feb. 28. Meanwhile, on Jan. 10, Legacy began installing the 10th reinforced concrete-filled pipe pile.

DBI, the project’s engineering design review team and geotechnical engineer Dan Brown and Associates “closely monitored the pilot pile installations and the efficacy of the modified procedures detailed...,” says Patrick O’Riordan, DBI’s interim director, in a Jan. 6 letter to James Zaratin, the general manager, and members of the Millennium Tower Association, which represents the residential condominium’s owners. “We are satisfied that the associated settlement and tilt remain within safe ranges and support [the] proposal to continue the retrofit using the modified installation procedures and operating under the current building permits...,” says the letter.


No Settlement or Tilting

Real-time survey data indicates no settlement or tilting occurred on Jan. 10, according to Ronald O. Hamburger, a senior principal with Simpson Gumpertz & Heger and the engineer-of-record for the $100-million fix.  “At the city’s request, we will continue to provide real-time surveying of building settlement, as a control measure, while drilling is performed, and halt installation should settlement become excessive,” says Hamburger in a statement to ENR.

The engineer halted work on Aug. 22, after the voluntary fix, designed to stem more than 17-in. of settlement primarily near the northwest corner, had instead accelerated it, causing a 1 in. increase. Legacy then revised its method and installed three pilot piles without exacerbating settlement.

Hamburger describes the modified method in a Dec. 28 letter to Neville Pereira, DBI’s deputy director for permit services: Prior to installing piles spaced 6 ft on center, the contractor installed a 4-ft-deep reinforced concrete guide wall system adjacent to the tower’s north and west sides. With square vertical openings centered at each pile location, the wall serves a dual purpose. It acts as a template for placement of the 36-in.-dia outer casings and it transmits surcharge loads from the cranes used to install the piles far enough below grade to protect the building’s basement walls from overstress.

Outer casings are installed through the guide-wall template using a rotary drilling system in which teeth at the base of the casing are used to cut into the soil as the casing is rotated and pressed into the ground, says Hamburger. The casing is pushed down 10 ft to 20 ft. Then, an auger bucket is used to remove soil inside the casing.

The process is repeated until the casing is tipped into the top of the clay, at a depth of about 105 ft below grade. Outer casings and the pile casings that follow are installed in maximum 40 ft lengths, with complete joint penetration groove weld splices between sections.

The 24-in.-dia inner casings are installed using reverse circulation drilling. Each is lowered into the center of a previously installed outer casing, with a drill string housed within the inner casing.

Once the inner casing is advanced to the design-pile tip elevation, the drill string is removed and a hollow reinforcing steel bar is inserted to the tip of the casing and used as a tremie to flow grout into the casing.

As grout is placed, the casing is withdrawn to an elevation about 20 ft above the top of the bedrock, to allow the grout to contact and bond with the surrounding soil/rock for load transfer.

Under the proposed reduced-scope plan, the number of 24-in.-dia piles within 36-in.-dia steel casings would decrease from 52 to as few as a total of 18 and the loading per pile during jacking would increase from 800,000 lb to 1 million lb. 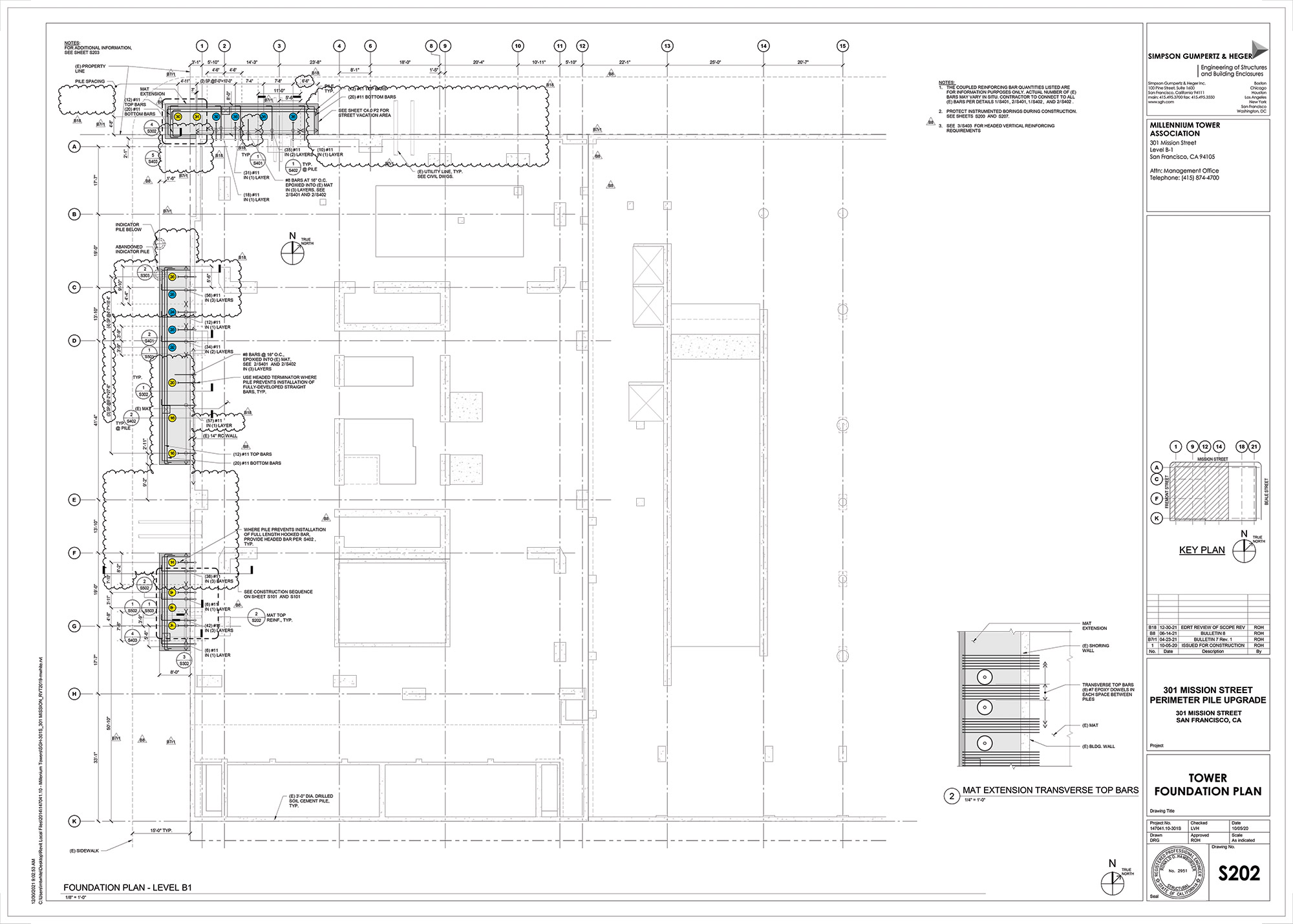 Counting the pile installed the week of Jan. 10, 10 piles are in place (yellow). There would be eight more to drill (blue).
Graphic courtesy of Ronald O. Hamburger
*Click on the image to see greater detail

The new scheme would enable Legacy to complete the pile work, at one installation per week, early this year and allow jacking before the end of the year. During the jacking, some loads of the existing foundation would be transferred onto the piles, which would then transfer the weight directly to rock, bypassing the consolidating soils causing the settlement.

Hamburger anticipates the building would not settle more than another 1/2 in. before construction is complete.

The revised scheme is based on an optimized design, not previously explored. It was arrived at through further analysis by Hamburger and John A. Egan, the pile upgrade’s geotechnical engineer-of-record.

Counting the latest pile work, the contractor has installed 10 piles, eight on the west side and two on the north side.

In a Dec. 27 letter to the condo association, Hamburger reminds the group that the upgrade is voluntary and the building still “remains safe and able to resist any likely earthquake,” even with  the additional settlement.