For Arizona State University’s newest research building, the $192-million Interdisciplinary Science and Technology Building 7, the project team was tasked with creating a striking facility that would anchor the historic Tempe campus while focusing on sustainable practices and features.

“This was an iconic building—the gateway to the university. This was going to be something that was different and not done at ASU before, and it needed to be really special,” says Bryan Kuster, senior vice president with construction manager McCarthy Building Cos.

Relying on a design-assist, construction manager at-risk approach, with a design by architecture firms Grimshaw and Architekton, the team evaluated construction solutions ranging from an innovative concrete decking technology to a three-story lift of the building to create more shaded gathering spaces.

“The way Grimshaw and Architekton designed it, it’s all about bringing the community into the university and realizing the science that is going on in the space,” Kuster says. 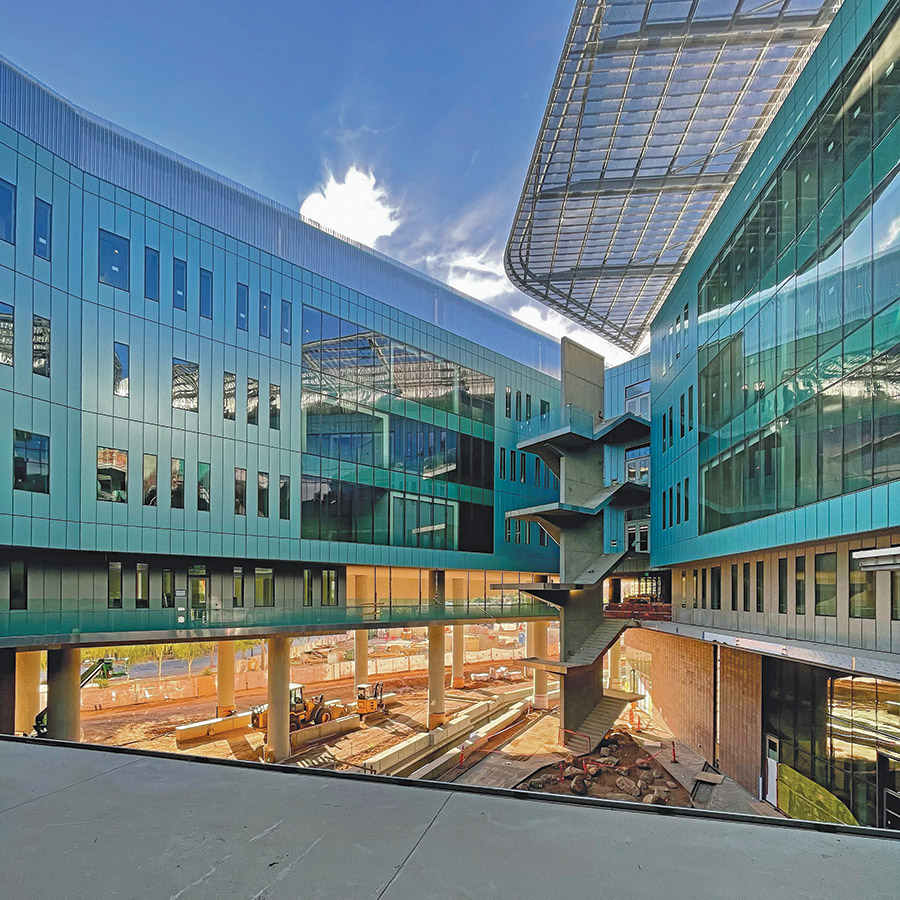 The ASU science building wraps around an outdoor courtyard known as the Exhibit Lab Atrium Biome, or ELAB.
Photo courtesy of Architekton

ASU design manager Richard Sander says the new space also allows university researchers to put their science on display. “The building will house the Institute of Human Origins—so we see where we came from— the School of Sustainability and (College of) Global Futures—where humanity is going,” he says. “This entire team took that and ran with it, and even as I’ve been in this business for many years, it was a real joy to see how that whole concept evolved into this unique building.”

ISTB7 is also designed to connect the community to Arizona’s history, the origins of humanity and the future of the planet. The site includes the remnants of a historic canal and other important features dating back to early Indigenous people.

“There’s history on this site and in the valley, and it’s interesting that the form of the building almost becomes the next step in history,” says Eric Johnson, associate with Grimshaw.

Construction began in January 2019, and the team had completed most of the finishing touches by the end of the year, including construction of a pedestrian bridge that connects ISTB7 to the mixed-use Novus Innovation Corridor and ties into a nearby light rail stop. 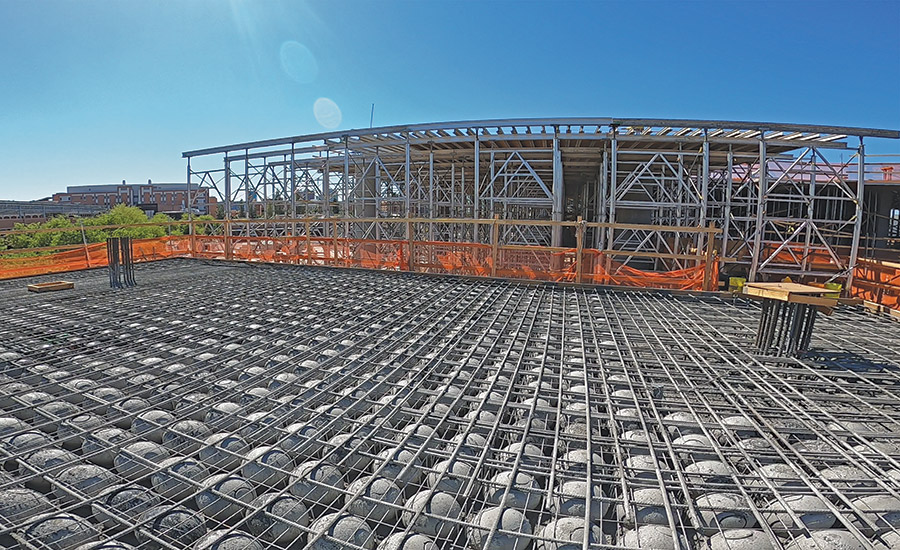 To shrink its carbon footprint, ISTB7 incorporated a patented BubbleDeck system of hollow plastic balls inserted into the deck slabs to substantially reduce the amount of concrete in the structure.
Photo courtesy of McCarthy Building Cos.

With ASU working toward carbon neutrality by 2035, the building was initially designed to meet LEED Gold specifications, but added sustainability solutions have put the project on track to achieve LEED Platinum. During planning, the team developed a protocol for selecting materials based on environmental impact, function and aesthetics.

“A lab building really needs to be a concrete frame, and concrete has a pretty big (carbon) footprint,” says Tom Reilly, a principal and architect with Architekton. “So the team immediately started to look at ways we could reduce that footprint and came up with a couple of unique ones.”

The goal was to reduce the total amount of concrete by at least 40%. But designers sought an aesthetically pleasing solution since concrete would be used in exposed columns, walls, stairs and the polished floors. 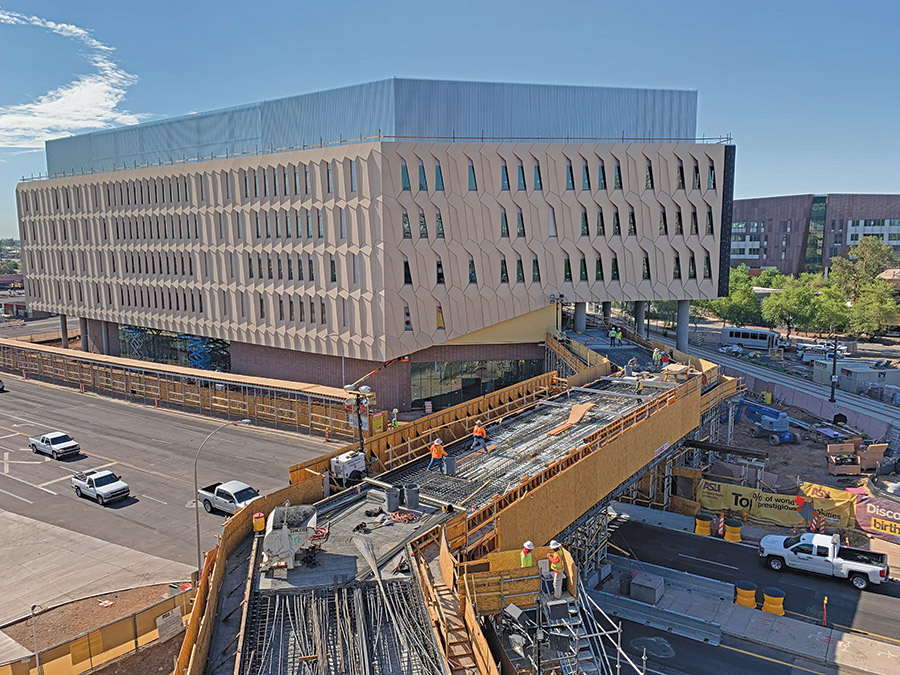 Once that was developed, the construction team implemented the patented BubbleDeck system—a void-form structural slab designed to substantially reduce the amount of concrete in the structure. The system consists of hollow, recycled plastic balls inserted into the slab and held in place by reinforcing steel to reduce excess concrete while maintaining structural strength.

“There’s history on this site and in the valley, and it’s interesting that the form of the building almost becomes the next step in history.”
—Eric Johnson, Associate, Grimshaw

All told, the main structure used 18,000 cu yd of concrete, and the technology helped avoid the use of more than 1,000 additional cu yd of concrete. Along with shrinking the building’s carbon footprint, the BubbleDeck system reduced the overall weight of the concrete, which meant the design could rely on smaller structural members, freeing up more usable space and saving money.

“That’s less mining. That’s less processing. That’s less trucks on the road. That’s less hours the project has to operate to place and pour concrete. So it really does have a big effect to incorporate this rare system that hasn’t been widely used within the United States,” says Carlos Diaz, project director with McCarthy.
The materials selection protocol yielded other sustainable solutions. In designing the exterior skin, the team was inspired by the self-shading pleats of the Sonoran cactus. The features took shape in the form of large glass-fiber reinforced concrete panels placed over a prefabricated envelope.

The panels, which were built in a shop in Phoenix and then transported to the site, serve both as a rain screen and a solar shield. Sensors placed on the exterior can track heat transfer through the skin’s system during the building’s life cycle. The system also helps block solar radiation. 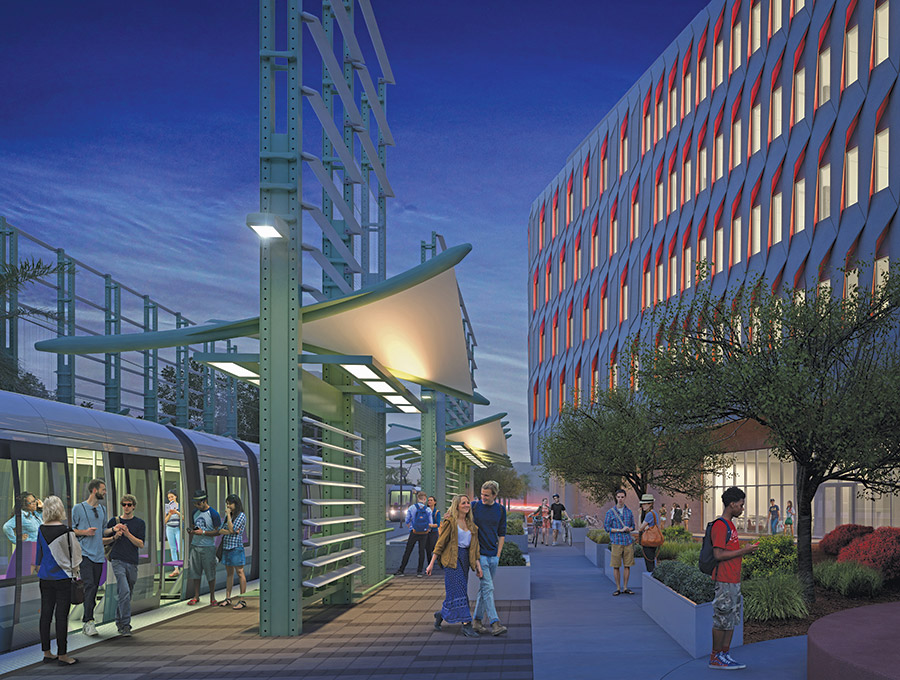 Building Gets a Lift

The building wraps around the atrium, which showcases ASU’s research and provides space for gathering and learning. The lighter structural load helped to minimize the building’s footprint at ground level and allowed for an airier entry to the campus, providing shade and natural cooling. “We were able to trim down the concrete to its bare necessities but also lift the building above the canal to create a comfortable microclimate below the building,” Johnson says.

The use of the raised space was inspired in part by Native American cliff dwellings, he says. “They built into cliffsides and basically harvested solar gain. In the winter, when they needed the heat, they harvested the sun. And then in the summer, the sun would be so high up that it wouldn’t penetrate their dwellings. It was blocked by the top of the cliff.”

At the center of the raised space is an outdoor courtyard known as the Exhibit Lab Atrium Biome, or ELAB. The ELAB also celebrates the archaeological discoveries made during construction. Excavation of the site uncovered 10 ft of soil and revealed the desert floor from 1,000 years ago. Discoveries included the old Kirkland-McKinney ditch, which powered the Hayden Flour Mill, remnants of the first paved coast-to-coast highway and a rail spur that linked what is now Four Peaks Brewing in Tempe to the Greater Union Pacific network. The team worked with the leaders from the O’odham Tribe to determine which historic items needed to be released back to them. 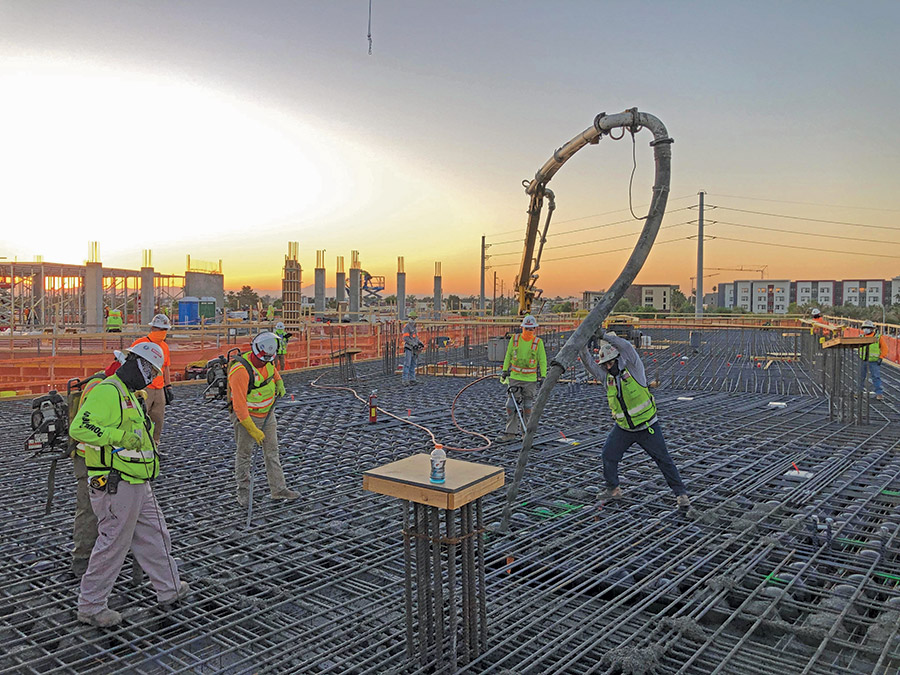 Workers pour concrete over the BubbleDeck system to construct the structural slab of ISTB7.
Photo courtesy of McCarthy Building Cos.

One challenge that emerged in installing underground utilities was the need to relocate an independently owned and active high-pressure nitrogen line without any shutdowns because it feeds several chip manufacturing sites in Phoenix.

The team also had to carefully sequence the university-owned infrastructure, including more than a mile of mechanical piping and five miles of electrical and network conduit. That entailed boring a tunnel—75 ft long and 25 ft deep—under the nearby light rail line to service the building. “This required a tremendous amount of coordination with the city of Tempe and utility providers,” says Kuster.

Another challenge was the building’s location at one of the area’s busiest intersections—University Drive and Rural Road. The intersection is bound by the light rail line, bisected by the canal and linked to an entertainment district and athletic venues. At the same time, the city of Tempe was installing right turn lanes at all four directions in the intersection. “To get everything coordinated between two separate contractors in a congested, busy area was tricky,” Kuster says. 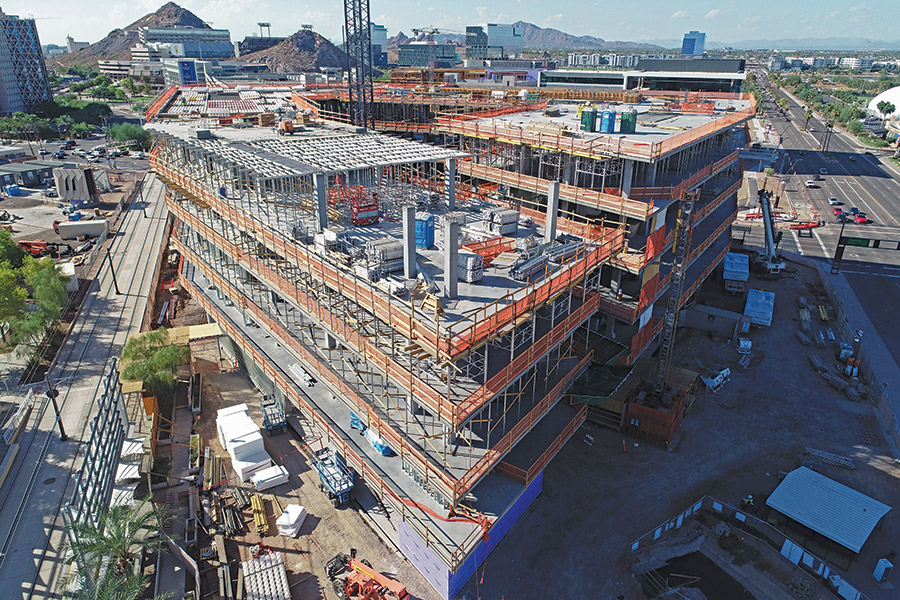 , which was inspired by the self-shading pleats of the Sonoran cactus and features large concrete panels installed over a prefabricated envelope.
Photo courtesy of McCarthy Building Cos.

Unexpected challenges added to the project’s complexity and timeline. In May, a fire broke out in the building during construction, but firefighters were able to get it under control in about two hours. University officials said the blaze was caused by the “spontaneous combustion” of roof insulation materials.

Despite the fire, Kuster says the project stayed on schedule. “The team was able to address the issue pretty quickly and sequence the schedule to repair the damage that was pretty minimal and almost exclusive to the roof level itself,” he says.

The team also sequenced work around available resources and labor during the COVID-19 outbreak. As a result, it did not affect schedule or cost, Kuster says.