This website requires certain cookies to work and uses other cookies to help you have the best experience. By visiting this website, certain cookies have already been set, which you may delete and block. By closing this message or continuing to use our site, you agree to the use of cookies. Visit our updated privacy and cookie policy to learn more.
Home » Project of the Year and Best Residential/Hospitality: Clippership Wharf
ProjectsNew EnglandNew England Construction ProjectsBest Projects2021
Best Projects

Built to be resilient against future sea level rise, the mixed-use development on East Boston’s waterfront transformed an underutilized area into an active and publicly accessible extension of its surrounding neighborhood. Reclaiming a former shipbuilding site, the project includes four buildings with 478 residential units on upper floors and a mix of residential, community, dining and recreational uses at the ground level.

“The success of this project was finding a way to take a post-industrial site, clean it up and deliver a solution that was true to Lendlease values of sustainability and resilience,” says Nick Iselin, Lendlease Boston general manager of development. “We made it a 100-year project, taking risks of sea level rise out of the equation.”

To reliably protect residences from flooding and predicted sea level rise, residential entrances on the 14-acre site were raised 14 ft above mean high tide for the area—well beyond Federal Emergency Management Agency (FEMA) guidelines. Raising the site meant implementing creative landscaping solutions to meet the neighboring sidewalks and streets, which are at grades between 8 to 11 ft below the project site.

While residences are at higher elevation, the project sits half below grade, supported by more than 1,200 concrete piles that are driven to depths ranging from 70 ft to 120 ft. Because the site was a former industrial hub, the team was particularly careful with disturbing and removing potentially contaminated soils, says Greg McGee, firm vice president. “A considerable challenge for the project was taking out as little dirt as possible while still following all of the regulatory guidelines,” he adds. 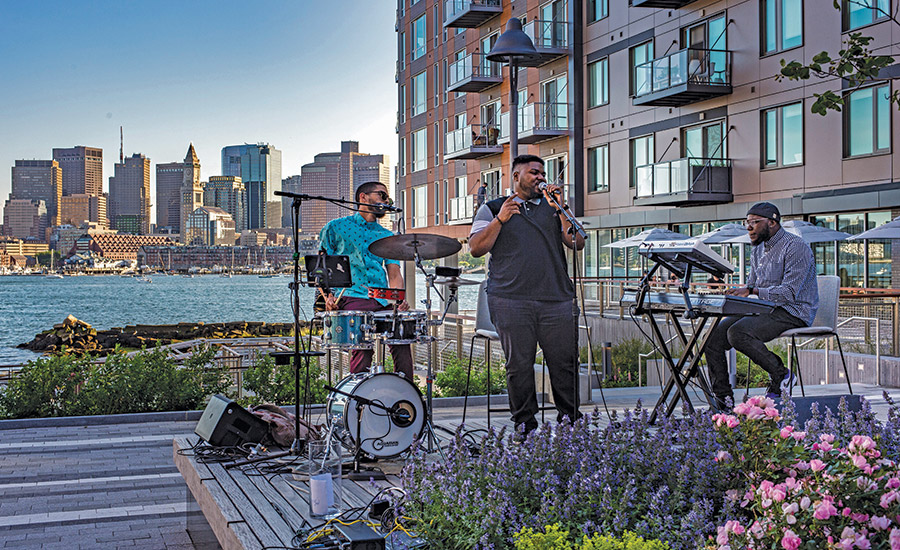 Although the project site spans 14 acres, seven are terra firma with 1,700 linear ft of harbor front. As part of its flood prevention plan, the site features a living shoreline with natural plantings, salt marshes, rocky beaches and wildlife habitats. In the event of a serious storm, Clippership Wharf will deploy a system of flood barriers to protect its low-lying areas.

Boston Harbor already experiences tides of more than 10 ft daily, so crews often had to schedule shifts around the tides. “We had to wait for the tides to go out in order to work in some of these areas,” McGee says. “The tide cycle is 23 hours, so the schedule shifts by an hour every day.”

McGee says the project was also a rare opportunity for multiple divisions of Lendlease to collaborate on a single project.

“All of these groups typically worked independently—from ownership to construction to development to finance,” he says. “It was an opportunity to work internally as a team to complete a project that is iconic for the city of Boston and for Lendlease.”