Leaders of the Northwest carpenters union resigned just weeks after members in Washington state narrowly agreed to a new contract, with parent building trade union United Brotherhood of Carpenters and Joiners of America placing the regional unit in trusteeship, amid alleged evidence of voter fraud and questions over pension fund investments.

The union regional council executive committee passed a resolution on Oct. 25 to consent to the trusteeship. In the resolution, the committee states a need for “independent supervision and oversight to promptly take control, lock down and preserve the electronic voting system to prevent tampering,” as well need for an independent investigation into vote rigging it says regional council staff uncovered.

The national carpenters union (UBC) appointed James Gleason as regional council supervisor. In a letter to members, he wrote that Executive Secretary-Treasurer Evelyn Shapiro, Director of Organizing Juan Sanchez and Director of Contract Administration Dan Hutchins all resigned from the union.

“There is a UBC team on the ground in the Kent office conducting a thorough investigation into voter fraud, pension and welfare investment improprieties, and other areas of mismanagement,” Gleason wrote.

A union spokesperson declined to comment to ENR. But, according to a post on the union website, UBC General President Douglas McCarron attended a carpenters Local 30 meeting in Seattle on Nov. 8 and said that there was evidence of fraud during the vote on the third tentative agreement with the Associated General Contractors of Washington for members in western and central Washington. 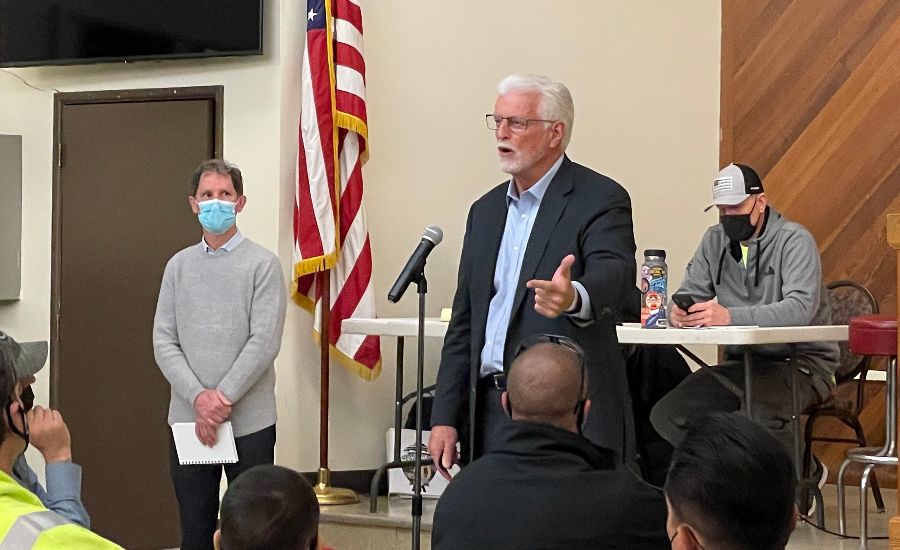 Union members in Washington voted down a fourth tentative agreement in September, leading to a strike that lasted about three weeks before 53% approved the fifth tentative agreement in early October. Word of the possible voter fraud left some members questioning online whether their new contract could be nullified. McCarron said at the meeting that it had not been determined whether the fourth and fifth votes were impacted by voting fraud.

During the Washington contract negotiations, union leadership faced increasing pressure from inside. An organization of Northwest Carpenters Union members called the Peter J. McGuire Group — named after the labor leader and UBC founder — opposed the tentative agreements, called for union leadership to resign and organized wildcat strikes separate from leadership-organized picket lines during the strike as many worksites were subject to no-strike clauses.

Contract negotiations were not the only issue riling union members. In February, the Carpenters Trusts of Western Washington sent a letter to pension fund participants to notify them of “an investment loss” in 2020 related to investments it made with management firm Allianz Global Investors. The trust states it had completely divested from the firm and was suing it to recover the losses.

McCarron said during the Local 30 meeting that $250 million of pension and health fund assets were lost in the investments. The trust has hired a new investment advisor, he added.

It was not immediately clear how long the trusteeship would last. McCarron said the regional council’s delegate body and executive board were disbanded, and new elections would be held once the trusteeship was complete.

“Our top priority remains servicing the needs of our members and organizing,” Gleason wrote to members.