FutureForward at Washington Square is the newest Career and Technical Education (CTE) campus for the Adams 12 Five Star School District in Thornton, Colo. Until the new campus opened in August 2020, approximately 25% of students interested in CTE programs at the district’s existing training center were being turned away due to space constraints.

From budget issues to unforeseen site-related delays and the onset of COVID-19, the project was not without substantial challenges. Initially, it was $6.2 million over budget. After identifying more than 125 value-engineering opportunities, AP worked closely with Cuningham Group to optimize efficiencies such as modifying selections for the superstructure and exterior skin materials. These efforts reduced the overage to approximately $1 million, which the school secured additional funding to cover. 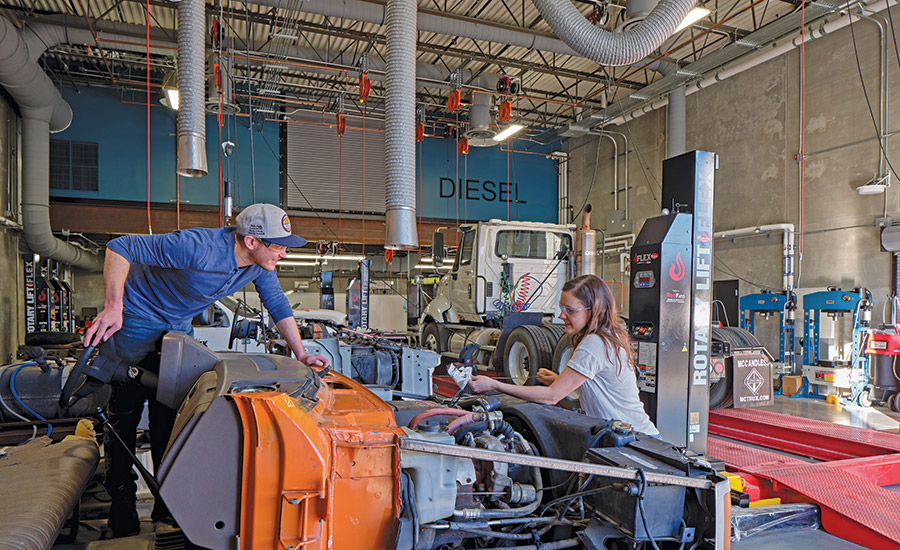 The project also faced several complications with site utilities. As-built drawings failed to show two existing utilities on site. A 50-year-old sewer line was discovered, along with a section of water line that had to be upsized. Per city requirements, 1,000 ft of the sewer line had to be internally flow-filled and another 1,000 ft internally lined to prevent the load of the 126th Avenue extension from collapsing it.

The campus also features a geothermal well system to support the building’s radiant floor heating as well as cooling needs. It includes 70 wells for the new structure and 40 additional wells to support future expansion.