This website requires certain cookies to work and uses other cookies to help you have the best experience. By visiting this website, certain cookies have already been set, which you may delete and block. By closing this message or continuing to use our site, you agree to the use of cookies. Visit our updated privacy and cookie policy to learn more.
Home » Best K-12 Education: Eliot-Hine Middle School
MidAtlanticMid Atlantic Construction ProjectsMidAtlantic FeaturesBest Projects2021
Best Projects 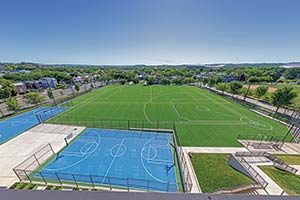 To expand the student population to more then 400 students per school year from 200, this $91-million middle school modernization included a 40,000-sq-ft addition and renovation of the  existing 110,000-sq-ft school. The renovated structure features a new gymnasium, a music and broadcast room, a cafeteria and a new library that preserves the old wood gym floors.

“They were tying into an existing facility,” one judge said, “which in and of itself usually creates some pretty significant challenges.” The judge said the team’s innovation was superior to the innovation in other projects in the category— “just their use of technology and scanning to tie things together.” 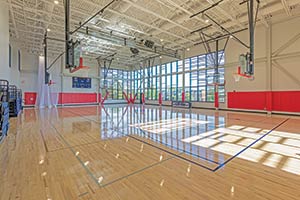 During construction of this two-phase project, the team faced many unexpected events that led the owner to approve budget increases and schedule extensions. For example, team members discovered a 30,000-gallon underground fuel storage tank with contaminated soil that conflicted with the addition’s footings. It took three months to unearth the tank, have the soil tested for contaminants and obtain proper permitting for tank removal and cleaning before removing the soil and foundations. The team also uncovered abandoned footings from a previous building wing demolition that similarly conflicted and required extensive work to document and remove. The existing building required significant reinforcement. The GPR-scanned concrete columns and steel plates were redesigned based on existing rebar patterns. Drawing on strength testing results, the team welded steel plates to existing steel columns to support the new loads. 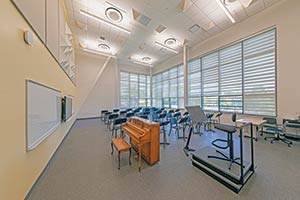 During demolition, the team discovered that the floor slabs contained asbestos. More than 18,000 sq ft of floor slab had to be abated  and a new 3-in. to 4-in. lightweight infill poured over top of  the remaining slab. This caused a delay of about two months and significantly affected the budget. Blending the new addition with the original 1930s building required a high level of craftsmanship. The terrazzo subcontractor and the architect, for example, closely coordinated on how to seamlessly tie a new drywall partition with a straight precast base into the existing terra-cotta walls with precast cove base. In flooring work, the terrazzo subcontractor created more than 15 mix design samples to closely match the 80-year-old terrazzo in place.