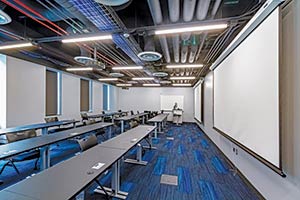 The team took an innovative approach to constructing the $133.9- million Hopper Hall Center, a 206,400-sq-ft multistory facility at the U.S. Naval Academy addressing cyber-related curricula and STEM fields. The project, completed on budget and on schedule, includes classrooms, research labs, lecture halls, mixed-use space, an observatory and a research/testing tank associated with the engineering and weapons labs. Other features are a 10,000-sq-ft sensitive compartment information facility, additional lab space and a small clean room.

One major challenge for the team was relocating an old substation at the Naval Academy to an adjacent site. Multiple brief outages were required over several months to transfer power to the new substation. This work was originally planned to take place before the start of foundation and underground MEP work. Site condition challenges, however, caused a delay in the power transfer to the new substation.

A significant effort was needed to safely resequence over the active substation. That required making design revisions to the foundation and relocating piles and was a challenge to coordinate and resequence.

One judge said he liked Hopper Hall’s safety write-up, “especially talking about the block cam for not being able to see where picks were occurring.”

The judge added, “I also liked their innovation section,” in which the team outlined “different things that they did with the community.” The judge said those two factors prompted the high score for the project.

Built on reclaimed land 5 ft above sea level, the project includes resilience features such as a bathtub foundation waterproofing system and a deployable flood barrier system. 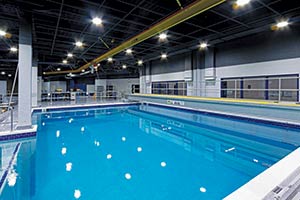 The bathtub design includes a 40-ft by 40-ft by 16-ft-deep testing pool called the Surface Underwater Robotics Facility. It was excavated well below sea level and required extensive dewatering on the edge of the Severn River.

The pool has an underwater 3D motion-capture system, a video capture system and a 2-ton monorail that allows larger objects to be transported from the loading area to the pool. It was designed to resist uplift forces when it is empty.

Design and construction of a roof  observatory was also challenging. A 110-ft-high foundation “pier” had to be built for the observatory near the center of the building footprint.

According to a modeling analysis performed by the designer of record’s subconsultant, the isolated foundation of the observatory road’s telescope tower was designed to result in telescope-base rotations unlikely to exceed 0.5 second of arc. That exceeded the RFP requirement of 1.0 second of arc.