This website requires certain cookies to work and uses other cookies to help you have the best experience. By visiting this website, certain cookies have already been set, which you may delete and block. By closing this message or continuing to use our site, you agree to the use of cookies. Visit our updated privacy and cookie policy to learn more.
Home » Best Higher Education/Research and Project of the Year Finalist: Calvin and Tina Tyler Hall Student Services Building
MidAtlanticMid Atlantic Construction Projects
Best Projects

With its mix of progressive and traditional design elements, the building serves as a bridge between the historic and modern precincts of the campus and the nearby residential community. The building aims to welcome new students, visitors, prospective students and their families while also serving the campus community.

“It is a beautiful facility at a prominent corner on the campus,” said one judge, who gave the project high scores for aesthetics and craftsmanship.

From the street level, the project rises in elevation with its sweeping curved walls to meet the existing campus. Topographically, the academic quad and the campus commons sit one story above the surrounding neighborhood. To negotiate the grade separation, there are two connected main entrances—one at street level and the other at the campus commons. A large, landscaped arrival court invites students and visitors toward the street-level entrance where grand exterior and interior stairs mark a formal procession up to the campus commons level. 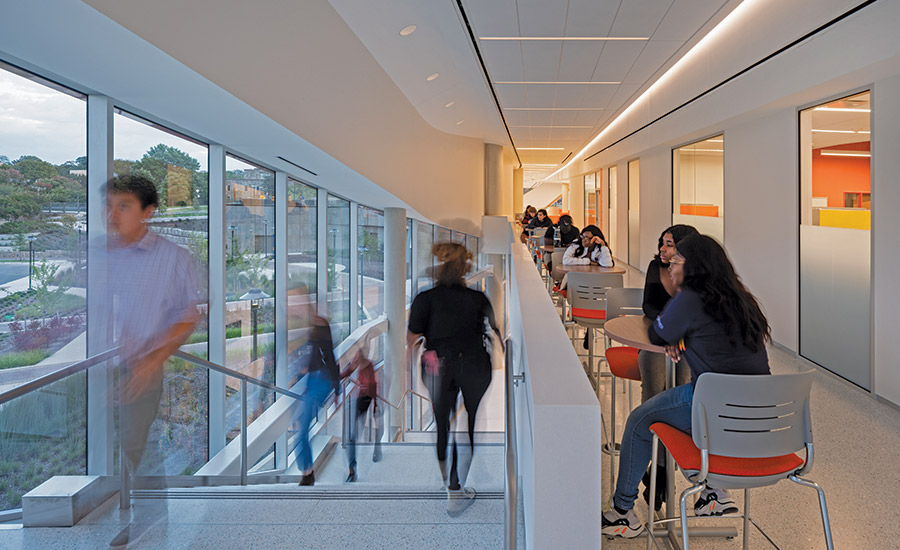 “The curving along the main entrance helps to welcome you into campus,” says Bob Mock, associate with architect of record GWWO Architects. “You come in from the corner intersection and it leads you into the building and the first-floor entrance.”

While the street-level entrance is geared toward new and prospective students, the campus commons entrance offers access to services for current students.
The building’s sweeping geometries are clad in limestone panels, intended to compliment the colors of other buildings on campus. Mock says that the university wanted a stone building, but traditional stone and masonry didn’t fit the $72-million building’s budget. Instead, the design team worked with construction manager at-risk Barton Malow to find an affordable solution that would achieve the design intent. The team went with 2-in.-thick limestone panels that are backed with precast concrete poured about 8 in. thick. 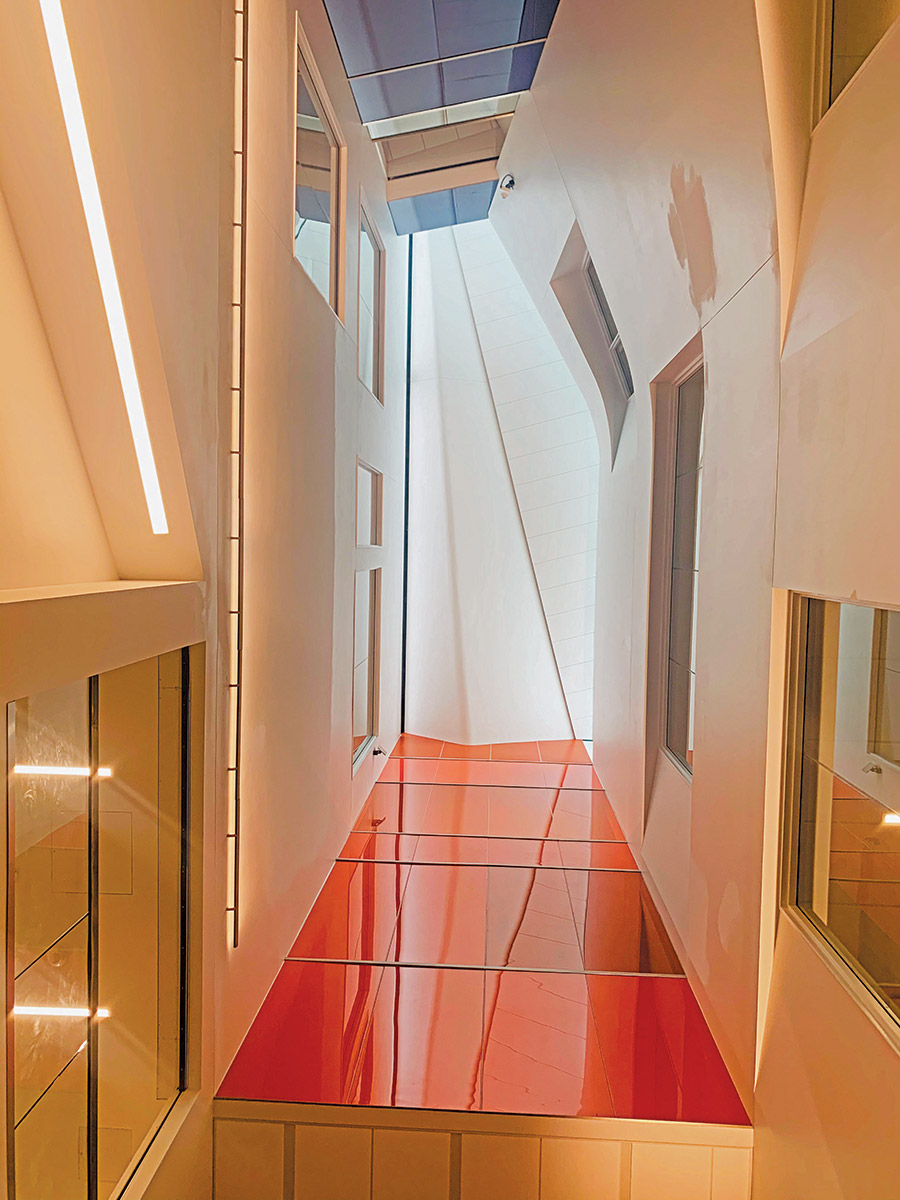 “We worked with the designers to let them know that the precast would be a great option for value engineering,” says Ben Morgan, vice president at Barton Malow Builders. “We worked as a team. There was great synergy.”

Installation of the limestone precast panels was originally slated to begin in March 2019, but a delay  in the limestone quarrying and production meant that the team could not start setting panels until May. Because interior work needed to move ahead to stay on schedule, the team was concerned about the risk of weather-related damage to the open structure.

Standard drywall could become damaged by rain or snow. To stay on track while waiting for the panels, crews built temporary perimeter enclosures and installed moisture- and mold-resistant drywall for topping out interior walls. That allowed the team to stay on schedule and build out overhead MEP.

When the panels were delivered, a nearly 1-million-lb capacity crane was brought in to blind pick each panel, the heaviest of which weighed up to 45,000 lb. The team was able to enclose the 142,000-sq-ft building within three months. 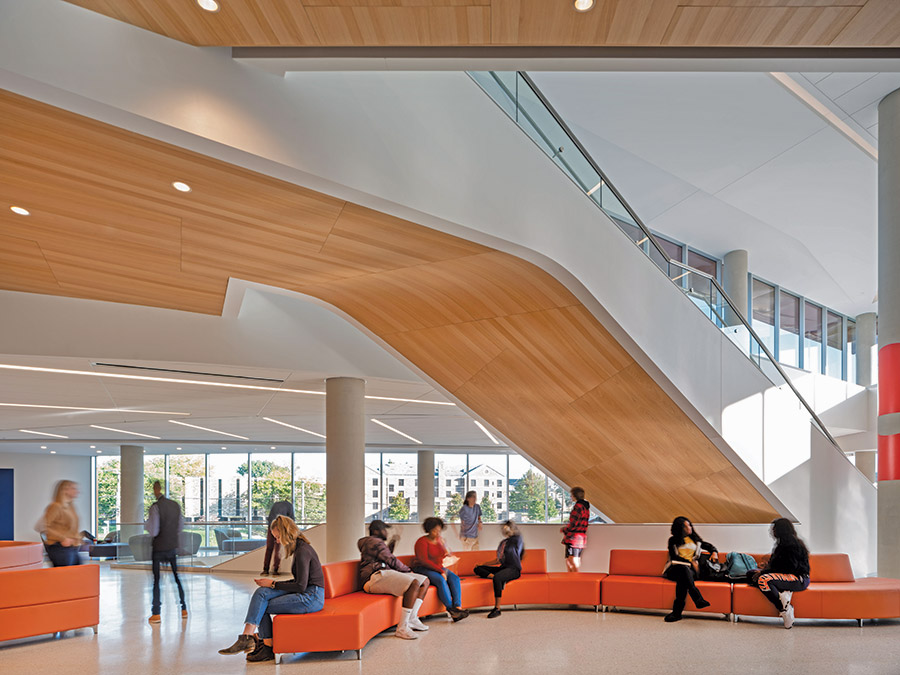 The building was designed with few right angles and minimal repetition, so the team leaned heavily on BIM coordination. The strategy enabled the team to catch potentially major issues with exterior panel measurements early. On the south side of the fourth floor, modeling revealed that window measurements were several inches off from precast opening measurements.

The team discovered that the precaster hadn’t translated the data properly. Without BIM coordination, the team claims that it likely would not have detected the issue until after panels were set. 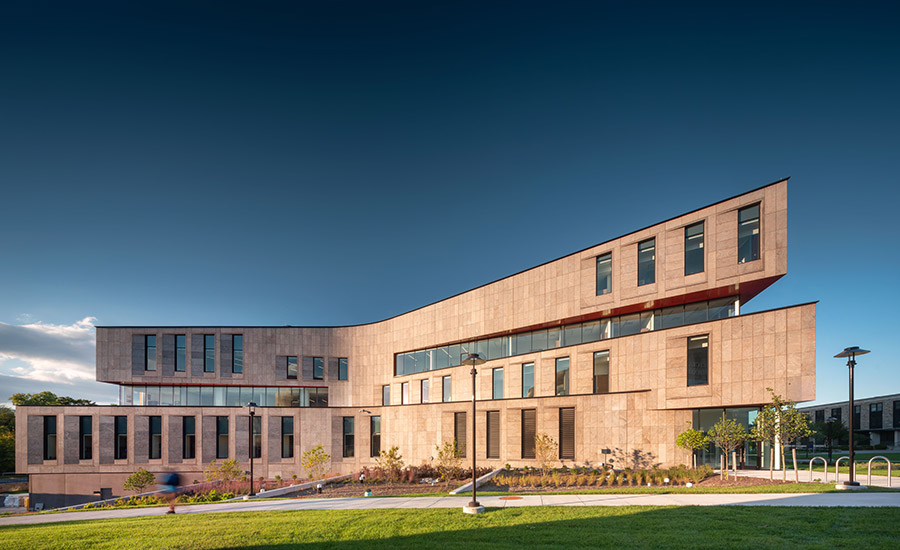 Other notable aspects of the facility include a multilevel lobby with communicating stairs, enclosed overlooks and open balconies. Walls and ceilings are sloped in varying degrees with transitions to differing surface materials.

A five-story light well receives natural light from the rooftop via a curved ceiling structure and vertical clerestory glass front.

Contractors shared a central platform scaffold and interior material hoist to build the light well as well as lifts for workers and scissor-lifts in the lobby areas to expedite work on high walls and ceilings. The project saw no lost-time accidents during its 388,800 work-hours.

The project also connected to the community by offering opportunities to students as well as neighboring residents. The annual fall and spring career fairs for the built environment departments attracted candidates who went on to become interns and employees at Barton Malow. The company’s Ben Morgan also served as an adjunct professor in the School of Architecture and Planning’s construction management program and often used the project as “a living classroom.” 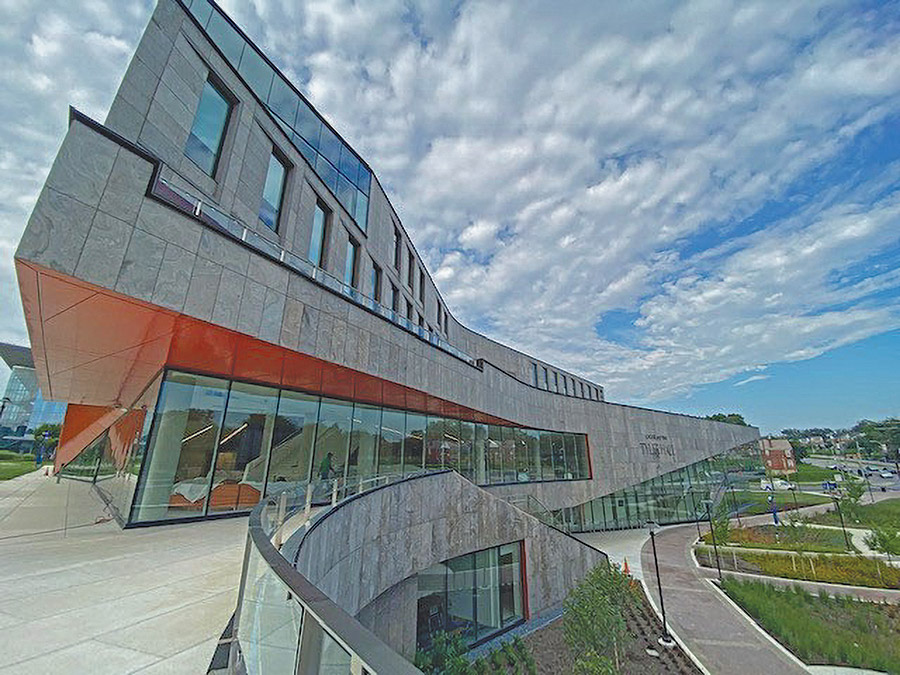 In addition, Barton Malow reached out to the surrounding neighborhood to recruit workers. During the project, 49 employees who worked on site also lived in the area, including five construction management team members. The range of positions included project managers, skilled subcontractors and third-party testing and inspection professionals.

The team was able to achieve 257% of its initial goal for employing residents of the community.

One judge said that he gave the project very high marks for its contribution to the community category in recruiting and hiring job candidates.

Completed on time and on budget in June 2020, the mixed-use project provides facilities that support admissions and recruitment, the bursar’s office, career development, enrollment management services, financial aid, work-study programs and many other services as well.

Best Higher Education/Research and Project of the Year Finalist: The University of Vermont STEM Complex