This website requires certain cookies to work and uses other cookies to help you have the best experience. By visiting this website, certain cookies have already been set, which you may delete and block. By closing this message or continuing to use our site, you agree to the use of cookies. Visit our updated privacy and cookie policy to learn more.
Home » New Flyovers Will Loosen Knot at ‘Speedway Bowl’
SouthwestSouthwest Construction Projects
Digging Deeper | Highway/Bridge

Key improvements to the Northern Beltway Interchange in Las Vegas will alleviate congestion on the city’s fast-growing north side.

A notoriously slow Southern Nevada interchange has the ironic distinction of being a neighbor to the Las Vegas Motor Speedway. Soon, however, motorists, while not reaching NASCAR speeds, will be able to zip through the connection of Interstate 15 and Clark County 215, about 10 miles north of downtown Las Vegas.

The I-15/215 Northern Beltway Interchange—unofficially dubbed the “speedway bowl”—is a Nevada Dept. of Transportation project designed to improve freeway access for the fast-growing population of North Las Vegas and its vital logistics sector. Located just blocks to the east of the new interchange are major distribution centers for Amazon, FedEx, Bed Bath & Beyond and Sephora. NDOT estimates the final project cost, funded 95% by the federal government, at $110 million. “A large proportion of our traffic is commercial trucking,” says NDOT resident engineer Nathan Enos. “Our project area is the main access to I-15 for a busy commercial concrete batch plant, Nellis Air Force Base, a Nevada National Guard armory and several Amazon fulfillment centers.”

The project also promises to offer a welcome home to residents of the existing bedroom communities—and those under development—along the beltway to the west. Besides the project’s big-job metrics—like requiring 116,000 tons of aggregate road base and 3,500 tons of reinforcing steel—are items such as 48 decorative boulders and 32 low-water-use plants. Those will make up part of the installation of rock and roadside sculptures by landscape architect Lage Design to showcase the role of water in the desert metropolis.

“We will be constructing sound walls, aesthetics and landscape architecture elements throughout the project,” says Luke Rollins, assistant resident engineer for NDOT. 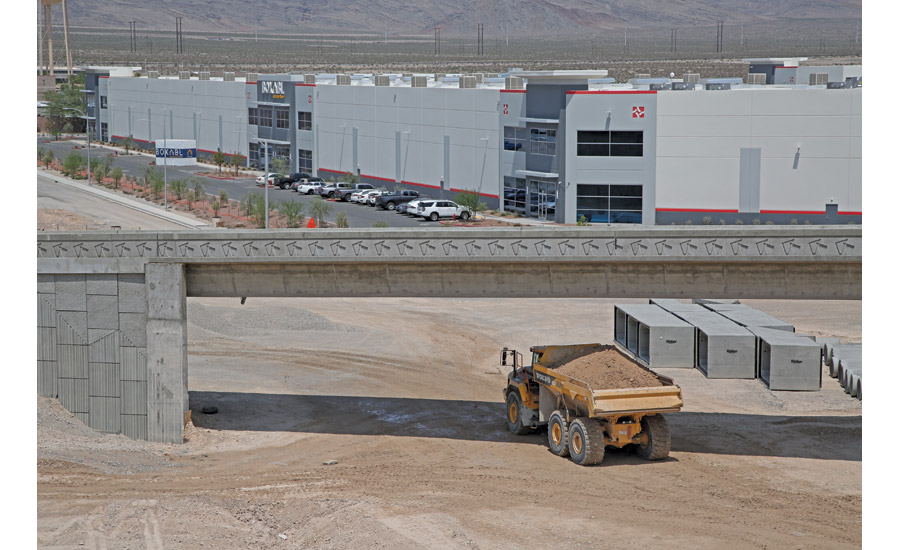 A truck delivers dirt under the new alignment of Tropical Parkway, passing under Interstate 15 southbound to the 215 westbound bridge. The work is taking place near large distribution centers in the area.
Image courtesy of NDOT

When completed late next year, the project also will widen the 215 beltway to six lanes from four, build dual-lane flyovers connecting the beltway with I-15 and add new exit and entrance ramps at Tropical Parkway, a surface street that connects to both highways at the interchange.

In early 2020, NDOT awarded the $99-million construction contract to Dickinson, N.D.-based Fisher Sand & Gravel. The company won an American Public Works Association Project of the Year Award in 2019 for its work on Interstate 11, which is being developed between Las Vegas and Phoenix. Project designer Atkins began its work in 2015, finishing in late 2019.

The speedway bowl project entails building two cast-in-place concrete flyovers as well as other structures, including a 51-ft-tall, 1,800-ft-long east-to-north connection. The structures sit atop a network of drilled pilings that reinforce the subsurface, with the largest measuring 10 ft in diameter and 104 ft deep.
Construction began in May 2020 during the deepest part of the pandemic and its restrictions—leaving the project team with little history of best practices to fall back on. 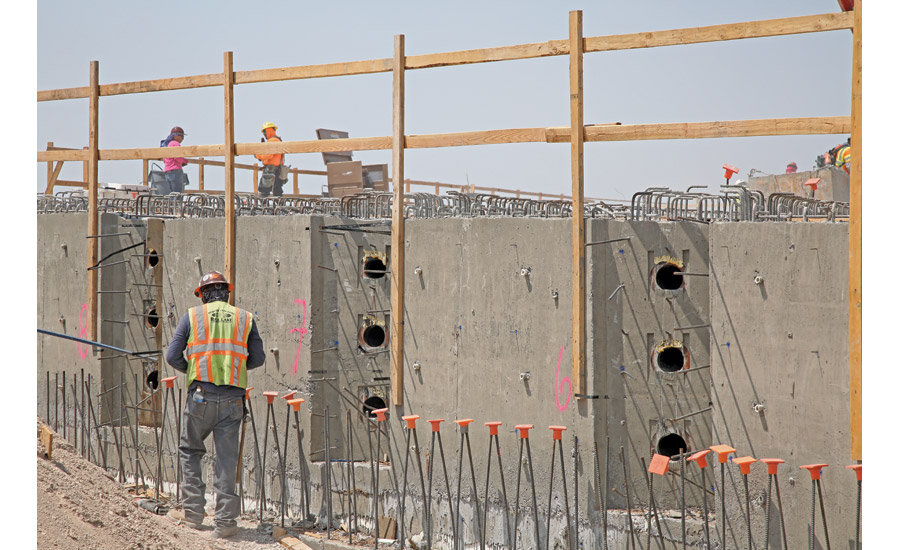 “Initially, there was not much consensus as to how social distancing would work on a jobsite. Could more than five people work in close proximity on a concrete pour, for instance, if all were wearing masks?” says Enos. “The contractor [Fisher Sand & Gravel] did an excellent job of navigating the uncertainty, complying with shifting OSHA guidelines, as did all the subcontractors and service providers on the project.

“With so much uncertainty about people’s health and the economy, I am really proud of how everyone pulled through, kept focused on the job we had before us and were able to still construct a quality product,” he says.

At the height of the restrictions, a realignment of  sewer lines needed to be completed before additional work could proceed—and it needed to be done without any service interruptions.

“North Las Vegas utility inspectors had very limited availability,” recalls Enos. “And the inspections had to be scheduled carefully, and sometimes even took place via FaceTime, with an NDOT employee on site showing the work to the inspector on his phone.”

“We tried to pre-buy as many materials as we could.”
— Robert Nelson, Nevada Area Manager, Fisher Sand & Gravel

Installation went on as scheduled. “Service was never interrupted, and the new lines are currently in service,” says Enos. The project also had to cope with the financial impact of the pandemic.

“We faced many challenges, such as procurement of construction materials and supplies along with the associated price increases,” says Robert Nelson, Nevada area manager for Fisher Sand & Gravel. “We tried to pre-buy as many materials as we could.”

An upside of the pandemic shutdowns for construction work was the cancellation of events at the nearby speedway. The interchange serves as the gateway to the venue, which seats 80,000 and hosts music festivals that attract almost twice that many people.

Now, with major events set to resume in the fall, NDOT has plans to deal with the mammoth crowds they will attract.

“Various races and the Electric Daisy Carnival bring hundreds of thousands of people and tens of thousands of vehicles through the project in a matter of hours,” Enos says. “Traffic control, phasing and structure falsework was designed and implemented that allows for the opening of additional travel lanes during these events, as mandated by project specifications.”

The new speedway bowl interchange will improve access to Clark County 215, a 53-mile semicircular beltway that goes from Henderson in the south, past the residential developments in far west Las Vegas and into the northern part of the valley, which is seen as a frontier of growth. The interchange anchors the northeast beltway terminus, while the also under construction $300-million Centennial Bowl will serve the northwest. [ENR Southwest, March 2020 and March 2021.]

“Every improvement that enhances the connectivity of the 215 to other roads and highways mitigates urban traffic congestion and helps drivers travel more efficiently around our community,” says Jones, whose district includes much of the southern and western legs of the beltway.

The beltway has been under construction for more than two decades, with final completion expected in 2025.