Split Schedule Allows Work to Continue at Circa

A Las Vegas resort already well under construction was dealt some tough cards by the coronavirus, and the best play was to split the hand.

Facing supply-chain challenges and COVID-19 safety restrictions, developers of the $1-billion Circa took an unprecedented step this spring and opted for two completion dates. The casino, pool deck, sportsbook, restaurants and other revenue-generating areas of the property will open in October, while the 777-room hotel tower will have 512 of its rooms coming online near the end of the year.

Circa, which will be the first new resort built in downtown Las Vegas in 40 years, had been on track for an ahead-of-schedule Thanksgiving completion, according to co-owner Derek Stevens, with the tower adding a floor a week in late 2019. He says the construction team was able to refocus that energy and pursue two completion dates instead of one.

“There has never been a project that pushed through during a pandemic before, so we get our own ‘first,’” Stevens says. “We were able to pull through because the team was creative throughout the process.”

The project’s supply chain began to tighten as the pandemic took hold overseas, according to Ryan Cogley, vice president and project executive for McCarthy Building Cos., the general contractor.

One of the first signs of trouble came when the project could no longer acquire marble from Italy, one of the countries hit hardest by COVID-19. “Quarries in Italy shut down,” Cogley says. “Then the factory gets shut down, then shipping lanes get shut down.”

He and the team saw challenges coming, and to get ahead of them, they asked themselves, “How do we go forward, and what does that look like?”

Delays crept into the process and led the construction team to propose the split schedule. Team leaders said the more spread-out lower areas offered easier access and better social distancing than the hotel tower and its confined spaces, which started with a major chokepoint—the construction elevator.

“We went from being able to lift 15 in a man-lift to less than five,” Cogley says.

With a workforce of nearly 1,000, the process of bringing crews into the 44-story hotel tower eventually became an hours-long ordeal because of restrictions on the number of people in the elevator and other social-distancing regulations.

“We would start staggering in our main shift at 2 a.m. and continue bringing people on through 10 a.m. to keep density down,” Cogley says. He adds that the elevator ride could be as long as two-and-a-half minutes to reach the top of the hotel tower.

The McCarthy team huddled with representatives of Tré Builders, the construction manager on the job, to discuss options. Cogley and his team recognized the need to make sure workers could stay busy, just in a reimagined way.

Co-owner Stevens says he quickly endorsed the plan to allow construction to continue in areas where workers could be safe and the job made more productive.

“It was smart to focus efforts on the podium, where everyone can walk to their designated area,” Stevens says.

The struggles with scheduling and safety protocols came on top of development challenges that predated the project by more than a century.

Circa sits in the heart of the Glitter Gulch casino district and takes up one of the oldest blocks in Las Vegas. The land auction that birthed the city was held 100 ft west of the property in 1905, when small parcels were sold off in what eventually became downtown.

“We went from being able to lift 15 in a man-lift to less than five.”

In 2015, brothers Derek and Greg Stevens bought the Las Vegas Club casino, which had been on the Circa site since 1930. It took several years for them to buy out smaller property owners and acquire the entire block, allowing construction on Circa to begin in February 2019.

Fronting Main, First and Fremont streets made for a tight squeeze during construction and forced careful choreographing of deliveries because there was no room for onsite staging.

“This stressed the importance of just-in-time deliveries,” Cogley says. “There was no more than three days’ worth of material that you could bring in at any one time.”

Outside Circa’s south entrance sits the Fremont Street Experience pedestrian mall and on the resort’s west side is Main Street, which stays busy with traffic for nearby city hall and the county courthouse.

“We had staging areas that were hidden from the public,” Cogley says. “Trucks would get called in, and one of three cranes would pull the materials off the truck.”

Crews used offsite prefabrication shops to construct portions of the building and then transported them to the site. There they were assembled using a fully coordinated 3D digital model credited for speeding installation of the ceiling and improving MEP coordination.

“Our framing and drywall partner used the CAD drawing to prefabricate large sections of ceiling structure,” Cogley says. “Something that would take weeks or a month to do was done in days and wouldn’t have been possible without a fully integrated model.”

“Downtown is a unique place,” says Circa architect Paul Steelman, “and it has become a remarkable gathering spot for locals as well as tourists.”

While many casino operators remodeled their Fremont Street exposures, Circa is the first ground-up resort construction since the street was closed to vehicle traffic 25 years ago.

“Circa will be the first resort to crack open the tremendous opportunity that Fremont Street Experience provides,” says Steelman, whose Las Vegas-based Steelman Partners is the world’s largest casino-resort designer, with more than 300 resort buildings to its credit. The firm also is designing the $4.3-billion Resorts World project on the Strip, set to open next year.

“Downtown is a unique place, and it has become a remarkable gathering spot for locals as well as tourists.”

Steelman says the goal was to make Circa inviting to the steady foot traffic along Fremont Street but leave the noise outside. “Fremont Street has an incredible amount of free entertainment,” Steelman says. “We had to also create some sound barriers between the building and the street but keep the feeling open.”

Circa is designed to be a destination beyond the casino, restaurants and lounges found at all Las Vegas resorts. Literally on top of the more typical attractions sits the rooftop Stadium Swim, a year-round pool deck with eight pools and spas that are also open to the public. It will feature multiple swim-up bars, private cabanas, meeting space and a 40-ft HD television screen visible to motorists at a nearby highway interchange.

“The pool took on a life of its own,” Steelman says, “so much so, we have a video of a year of the sun going across the pool to determine where the shadows would fall.”

Stevens also is building a sports-betting brand around Circa, which will feature the world’s largest sportsbook. The three-story, arena-style venue can hold 1,000 spectators watching games on a 78-million-pixel screen. The resort also lends its name to a Circa Sports online-betting app that Stevens introduced last year, part of a clicks-and-mortar strategy.

“Derek loves sports betting,” Steelman says, “and the Circa Sports betting app must have an appropriate physical location.”

Circa also is the first resort to come online since the advent of ride-share services. The resort’s Garage Mahal parking structure was designed with that in mind, with areas set aside for ride-shares, tour buses and individual vehicles.

“This is a true transportation system,” Steelman says. “It will allow for our traffic flow to be 10 times greater than any casino downtown.”

One amenity Circa patrons are expected to notice but not see is the ventilation system, which brings air inside through a raised floor rather than having it come down from above, which is more typical in American casinos.

“My brother is a civil engineer, and he pushed me down this path for HVAC,” Stevens says. “With air coming up from the ground, the cooling costs are less. It’s great from an efficiency perspective and great in an environment where smoking is allowed,” as it is in Las Vegas.

“For the comfort of guests, all that matters is the temperature and humidity from the ground to 6 feet,” he says, “and with what’s happened in 2020, we think clean air is more important than it has ever been.”

Stevens says continuing the project during the pandemic provided a spark of hope to Las Vegas, where a dozen resorts remain closed and unemployment remains near 20%.

“We were able to pull through and be creative throughout the project, and hopefully we get people fired up about coming to visit Las Vegas,” he says.

Circa Progress Helped By Regulatory Relief

The decision to split the Circa resort project into two completion dates—one for the casino and one for the hotel—was such a rarity it required the approval of Nevada gaming regulators.

Circa received a waiver from gaming regulations that have long benefited Nevada’s construction industry by requiring at least 200 hotel rooms to qualify for the unrestricted gaming licenses that casinos need.

The 28-year-old rule stems from “established casinos wanting to limit competition from those who hadn’t invested substantially in construction,” says UNLV gaming industry historian David Schwartz. He notes that Circa’s rooms will open just a few weeks after the casino does.

DOT’s The Story, And He’s Sticking To It

Lots of adjectives are used to describe the new Circa resort in downtown Las Vegas, but “perfect” isn’t among them.

On the west side of the 30th floor of the hotel tower, an exterior glass panel was installed upside down, turning what had been intended to be part of a decorative white stripe into a white dot instead (see middle of photo below).

The flaw, dubbed the “Modot,” in recognition of the worker who installed the glass, took on a life of its own, with Circa co-owner Derek Stevens even giving media interviews about it.

Stevens insists the Modot was an installation error and not a Las Vegas PR stunt. “It was absolutely an accident,” says Stevens, who is known for his marketing acumen. (He provided 1,700 free flights to Las Vegas earlier this year.) “I consider myself to be creative, but here truth is stranger than fiction.”

He says it will be decided this fall whether the Modot will be no more when the resort opens in October. 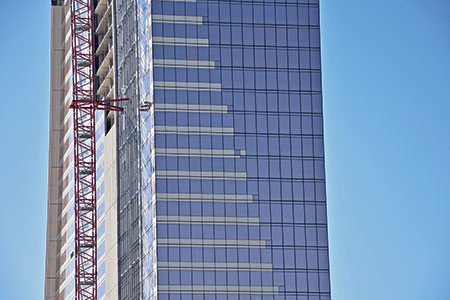