Project team on the new city hall project in Provo has stayed ahead of the supply curve, saving the owner both time and money

"How much ballistic board do you have right now?”

Jay Taylor was surprised by the question. The president of drywall contractor Muddy Boys was helping Layton Construction build the new city hall in Provo, Utah. So Taylor expected regular calls from Layton construction manager Brian McBeth. He just didn’t expect to be talking ballistic board.

“Brian called me six months before we even needed the product, wanting to know how many sheets we had in our yard,” Taylor says. “I went out there personally and counted over 50 sheets and took a picture.”

McBeth was determined to be proactive with this project. He was also talking drywall and paint and elevator shaft boards, not to mention the 35-ft metal studs required to build the 205,000-sq-ft city hall. Fresh from a project affected by U.S. tariffs on Chinese goods, McBeth began procuring materials in early 2020 in preparation for an April groundbreaking. 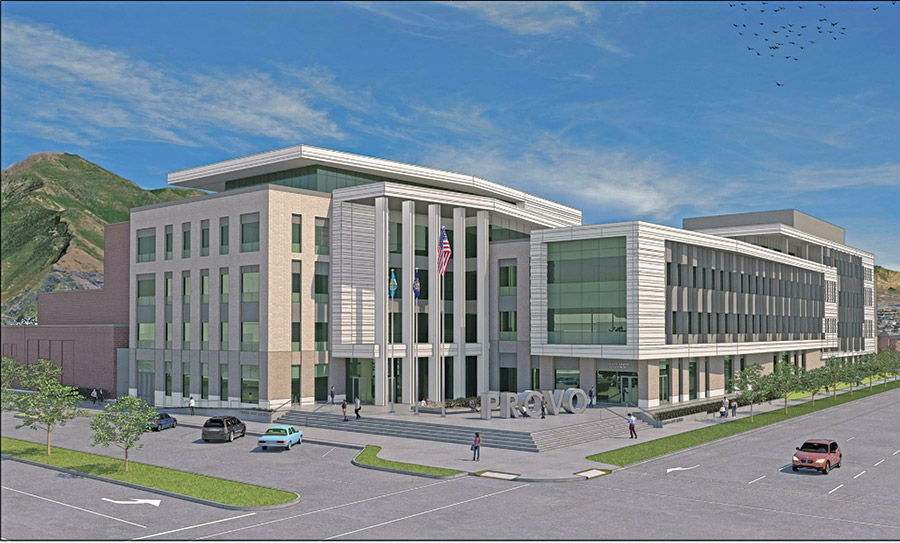 “We were still dealing with tariff problems, with price increases and shipment delays,” McBeth says. “We reached out to our subcontractors and told them to order everything, even if we wouldn’t need it for months.”

As for that ballistic board (bullet-resistant wall panels), Taylor already had more than enough for the project, a considerable investment at more than $1,000 a sheet. But other materials needed to be ordered immediately from suppliers and manufacturers, costing about $1.6 million up front.

All of the project’s subcontractors pitched in, McBeth says, purchasing 1,500 gallons of paint, 243 metal lockers and miles of electrical conduit. Landscape pavers from China now sit in storage, waiting to be used in spring 2022.

With 10 months to go on the two-year project, the strategy paid off. When a shortage of elevator shaft boards hit the industry and the cost of metal studs increased 100%, Muddy Boys had already acquired both materials. Early purchases of metal studs saved the city about $300,000 to $400,000, according to McBeth.

The pandemic added to the industry’s volatility, says Scott Henderson, who represents the city of Provo on the project. “No one had the COVID road map in construction management. It was always possible prices could go down. So you make an educated decision … and this one turned out very, very well.” 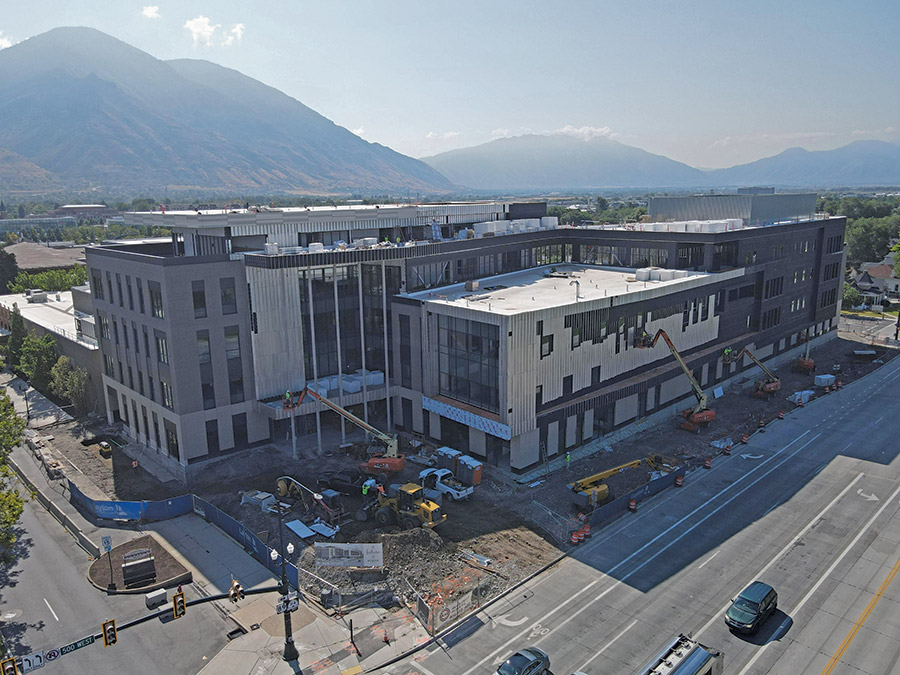 Financed by $69 million in city bonds passed by voters in 2018, the project replaces the current city hall, built in 1972.
Image courtesy of Layton Construction

With a construction cost of $58 million and financed by $69 million in city bonds passed by voters in 2018, the project will replace the current city hall, built in 1972. The new city hall will house 300-plus workers in all city offices and include the fire department, the city council and the police station. 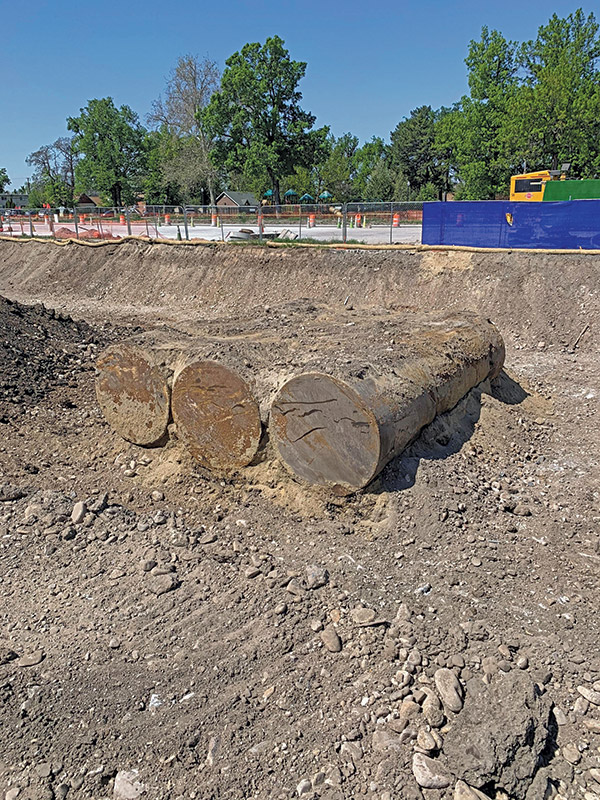 While digging the project’s foundations, the team discovered gas storage tanks abandoned by one of the site’s previous users.
Image courtesy of Layton Construction

The five-story building wraps around the adjacent Covey Center for the Arts, McBeth says, where the police dispatch department is currently located until the new building is ready. The construction site sits about 100 yd from the current city hall, which will be demolished to make way for a mixed-use redevelopment.

“I’d like to think the city hall will set the expectation for the entire block,” says Henderson. “The redevelopment project is just starting the design phase while we’re in the construction phase. It’s caused all of us to be a little more fluid in our thinking, and there may be some changes at the end.”

With the new building’s prominent role in mind, the project team decided to swap out the large letters spelling “PROVO” at the front entrance for something a little flashier. The fountain, or flash wall, will feature cascading water spelling out messages for the community. “It’s something that draws people in and softens it up a little bit,” Henderson says. 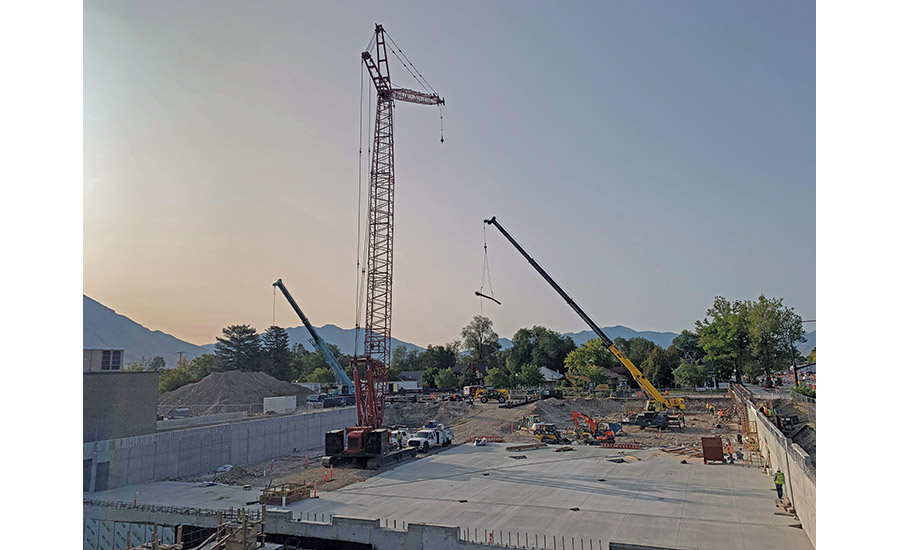 Crews work on placing the basementlevel slab for underground parking and perimeter foundation walls while a smaller crane at right stages rebar for the foundation.
Image courtesy of Layton Construction

The project’s downtown site has seen many uses: a tire store, a fast food place, a gas station and hotel. “Back then, they didn’t demolish like we do now. They just pushed things in and covered them up,” McBeth says.

That led to a few surprises for the team. As crews began digging for the building’s 14-ft-deep foundations and underground parking, they found brick, rubble and a long-buried swimming pool. They also discovered four unregistered underground tanks that were leaking gas and oil.

The city of Provo moved “at breakneck speed” to get the state involved and the mitigation team online to deal with the tanks, Henderson says.

“We took care of that as quickly as possible, so that freed up the rest of the project schedule,” he says. “Sometimes you can see on projects that people leave the schedule responsibility only to the general contractor, and the owner does not understand they carry a responsibility there, and even the architect carries the responsibility. I really like the team we put together because they understand they’re a key element in running this project efficiently.”

Crews removed the tanks and 16,000 yd of dirt from the site and added fill to lay the foundations, bringing in a mobile crusher to break down the 8-in. to 10-in. boulders in the rocky soil.

The situation was complicated by groundwater discovered 12 ft below grade, McBeth says. “Dewatering was a big challenge; it was basically an underground river down there. We had a dewatering system that was going 24/7 so we could lower the water table by 2 feet.”

The building’s police station also offered unique construction challenges, requiring special materials such as ballistic board and bullet-resistant millwork.
“We actually had to redesign a portion of the building because the police chief came to us,” McBeth says. “He noticed as the building took shape that his police officers had the potential to exit out of the south of the building and be a target for snipers.” 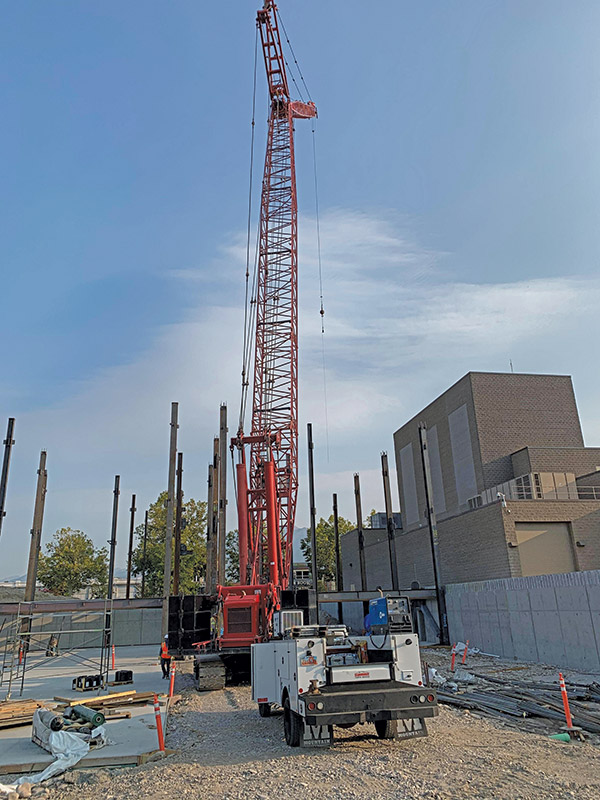 This 777 series crawler crane with a jib stages the building’s structural steel. The team originally planned to use a tower crane but rearranged the project flow to accommodate a smaller crane instead.
Image courtesy of Layton Construction

Utah architectural firm VCBO also designed for plenty of natural light, placing the main-floor windows above ground level so no one could shoot into the police station, McBeth says.

The project’s construction manager/general contractor (CM/GC) project delivery method, which brings in a construction manager during the design process, allows for flexibility and returns any money saved back to the owner. The team had initially planned to bring in a tower crane for the project, for example, but opted for a smaller crane instead.

“Our biggest challenge with that was the crane’s reach,” McBeth says. “Because the building is so big, the crane had to be closer to the building in order to construct. So we split the building into halves. We built the north end all up, then the south end. It wasn’t the most efficient, schedule-wise, but it did save the owner money.”

The team maintained this delicate balance between scheduling and cost throughout the project, says Henderson, calling Layton an “orchestra conductor” that makes sure everything comes in at the right time.

“In a project like this, the eyes of the community are on you,” he says. “The emphasis of being on time and in budget is magnified.”