Nearly every aspect of Portland International Airport is getting a redo as the $2-billion PDX Next project redevelops or expands two concourses, adds parking, updates operations and features a core terminal redevelopment. But the megaproject’s pinnacle piece is an innovative, nine-acre, seismically isolated curved timber roof that uses locally sourced materials.

“The largest of the PDX Next projects are interconnected,” says Vince Granato, chief projects officer for the Port of Portland. “They are united in their goal of updating and enhancing the airport and preparing PDX for the decades to come.”

The $100-million Concourse B, a Hoffman Skanska joint venture project designed by ZGF Architects, is scheduled for a fall 2021 opening that includes demolition of Concourse A to nearly double the concourse space while moving the exoskeleton to the outside for energy efficiency. 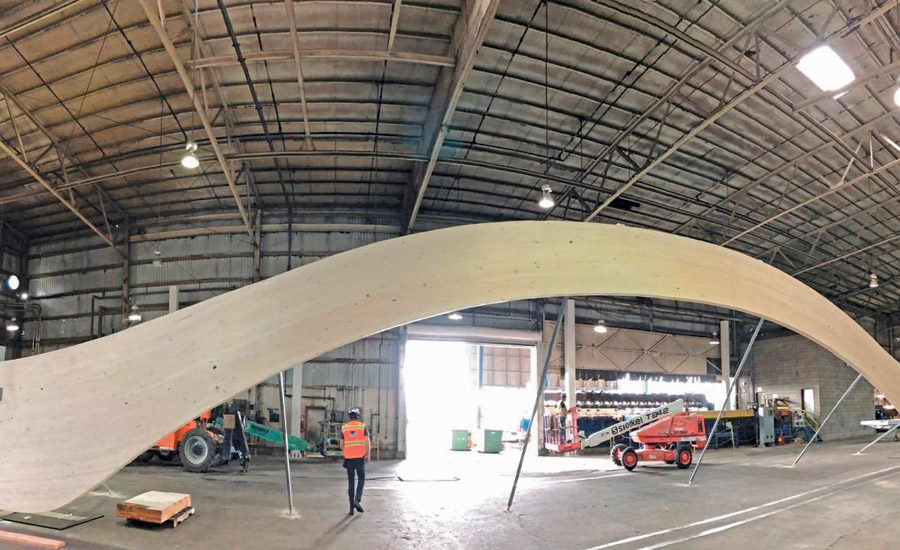 The roof is being built at the airfield.
Photos courtesy Port of Portland

Meanwhile, a $282-million flexible transit hub (under construction by JE Dunn with design by YGH Architects) will host 2,225 close-in parking spots and rental cars on site when it opens in fall 2021. Already, a $67-million quick turnaround facility for rental cars has opened.

But the $1.2-billion T-Core project serves as PDX Next’s prominent piece, a project slated for a 2025 opening. It remakes the footprint of the airport’s core while nearly doubling its size.

The project, designed by ZGF and constructed by Hoffman Skanska, with KPFF as the structural engineer, includes everything from remaking back-of-house operations to a completely new layout for ticketing and the lobby, all while making the space more energy efficient—a ground-source heat pump will reduce energy loads by 50% per sq ft—and done in Pacific Northwest themes. But it’s the new roof that leads every conversation.

The undulating timber roof highlights what Granato hopes will become a focal point of the updated PDX. ZGF architect Gene Sandoval says what makes it all work are the “roots” that not only support the roof but also open and modernize the space inside the terminal.

“You don’t get a roof like that without touching every single part of that building,” says Sharron van der Meulen, ZGF architect. “We had to deal with functional and operational aspects of the future.” 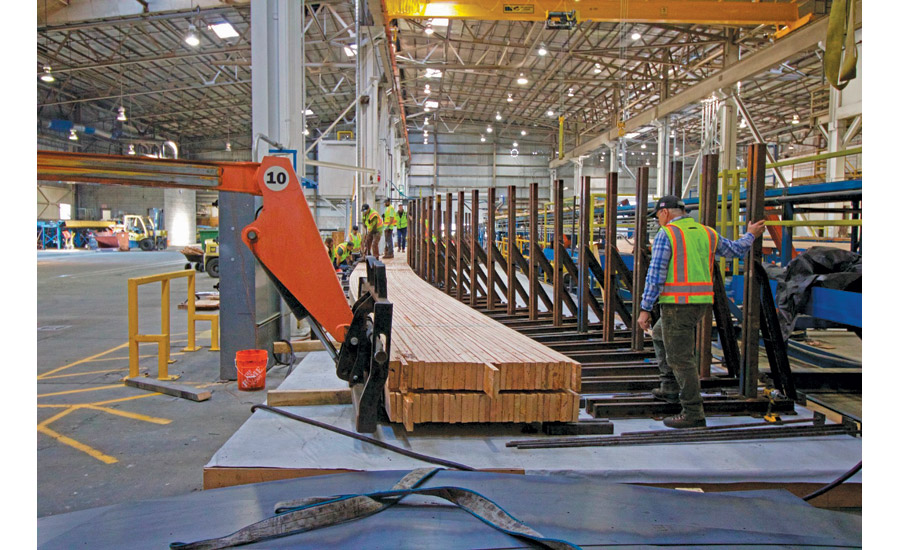 Douglas fir was chosen for its stiffness.
Photos courtesy Port of Portland

The complete T-Core overhaul eliminates eight buildings that had been stitched together since 1954 to create the floorplate. Instead of the current 200 columns in a seismically vulnerable design, the team sought to use only 34 columns—half of them new and half that use existing footings—to hold the 18-million-lb, 380,000-sq-ft roof while opening up 100-ft by 125-ft bays between the columns to create more operational flexibility.

The roof uses nearly 400 glulam beams—more than 250 of them are 80 ft long—paired with 40,000 lattice pieces atop 34 Y columns. The columns are about 96,000 lb each, fabricated from 1-in. plate steel and filled with thermal grout for fireproofing.

ZGF and port officials selected timber—the roof features 3.3 million board feet of Douglas fir—for a variety of reasons, including cost, constructibility, sustainability and a chance to celebrate the resources of the area.

Timberlab, Swinerton’s mass timber company, is working with Hoffman Skanska to handle the full timber scope, everything from walking local forests with the contractor and architect to select lumber to working with Oregon firms, such as Zip-O and Freres Lumber, to ensure first-use production is attained in the beams and laminates.

“You don’t get a roof like that without touching every single part of that building. We had to deal with functional and operational aspects of the future.”
—Sharron van der Meulen, ZGF Architects

The 80-ft glulam beams, never before produced by Zip-O, with 7.5 ft of depth and a 16-ft arch in a single span, eliminate a spline halfway through to reduce the cost by removing steel hardware. The design also aesthetically highlights the wood while minimizing metals.

While making the beams, Jared Revay, Swinerton’s chief project manager, says they worked with the manufacturer to create mock-ups. “We wanted to see what would happen to the beam when supporting weight,” he says. “Not having done a test would have been a disaster.”

He says tweaks solidified their ability to create these beams within a 0.5-in. tolerance across the 272 80-ft beams, part of project’s 1,500 glulams. T. Tyler Freres, vice president of sales for Freres Lumber Co., is sourcing the project’s veneer, including for the Douglas fir roof diaphragm. 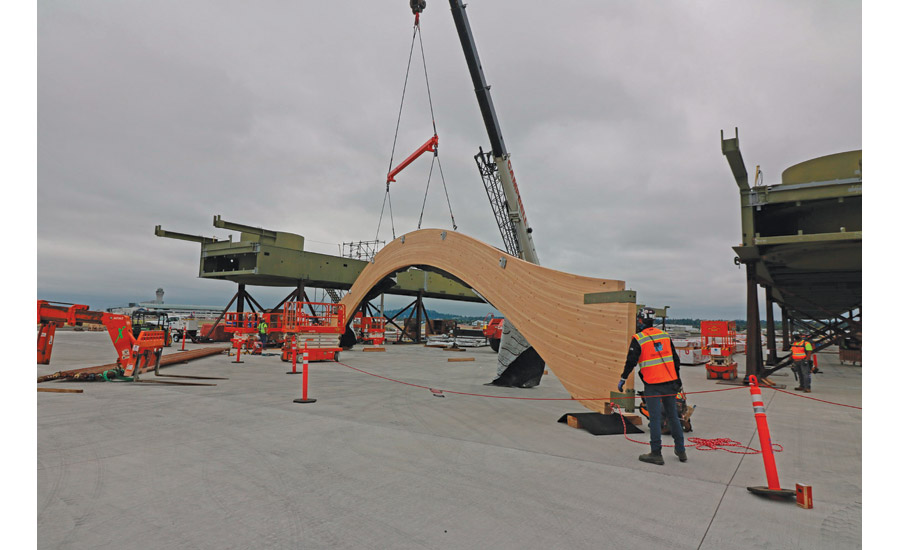 The work required tens of thousands of specially cut components that make up the curved glulam sections.
Photo courtesy Port of Portland

Douglas fir was selected for its stiffness and predictability and for an improved bond, while the veneer strengthens the fibers. PDX Next is the first major project for this new-to-market product, using 2-in.-thick panels, each with a bevel for interlocking the unique curvature.

“There is hardly a square or rectangular piece on this,” Freres says. “Frankly, I don’t know how else they would do it in the real world. We can put these down in much larger elements, so you don’t have as many pieces to work with.”

The roof will be fully created at the airfield, including skylights, insulation, mechanical components and finishes. With the jigsaw puzzle-like roof being so complicated, the project was broken into 18 “cassettes,” each about 120 ft by 110 ft. In all, each cassette has about 120 individual pieces, totaling around 2,200 pieces for the roof, with some individual pieces as large as 12 ft by 30 ft. Once completed, crews will place them atop the existing terminal and onto the columns using Mammoet rollers.

The roof will go up in four months in early 2022, but pre-assembly on the airfield is already happening. “If you were to fly in today, you would see the PDX factory right on the airfield, where all of these components are being put together,” van der Meulen says.

Working at an operating airport required prefabrication but also demands intricate planning both from tolerances and from the ability to place roof pieces overnight during a six-hour window when no passenger traffic is occurring below. “It has to be set so passengers can walk under it the next day,” says Dave Garske, vice president of Hoffman Construction, speaking for Hoffman Skanska.

That leaves no time for tinkering at the final site, a tricky time frame for a project that features curved pieces of wood never before created at this scale, according to the project team. Foundations go inside and outside the building for the prefabricated roof, so “when it moves into the proper location, it has to be perfect,” Garske says. “We have a whole team dedicated to the survey sequence.”

Mock-ups are paramount. “You don’t know how it is going to act when you cut it flat and then bend in three dimensions,” Revay says. “You have to fall within a 3/8-in. joint tolerance. We went through a mock-up process with that.”

Three rounds of mock-ups included working with specialty CAD experts from Canada to drill the dimensions down. The first cassette was constructed satisfactorily, even after all the challenges.

“We weren’t sleeping for a couple weeks before,” Revay says. With tens of thousands of unique pieces needing to be cut to specific dimensions and go onto curved glulam pieces even before assembling the cassettes, Revay says crews cut, code and track each piece so they know exactly where it needs to be at all times, a logistical management process unlike anything he’s ever been a part of before.

“We’ve done mock-ups of glulam connections, wood to steel connections, wood to attachment connections—those were mocked up and tested,” says Joe Schneider, account manager and senior vice president at Skanska, speaking for Hoffman Skanska. “That is the only way to see load challenges, and we did adjustments to how we built that, and now it is going in really well.”

Along with the wood, the steel columns and supports were also mocked up.

Freres says that not only will the roof produce a regional feel but will signify a true local product. The entire PDX Next’s wood is sourced no farther than from 250 miles away, targeted from specific types of forests that include tribal and forest-restoration stands.

The Port of Portland had a progressive goal for the wood to be as local as possible, sending the mill, contractors and architects into the forests to pick out timber and then track it every step of the way until the finished product. “That way,” Granato says,” we can ensure the lumber is traceable back to those sustainably managed forests.”

“This is a hallmark project— there are so many people walking through the building who will get a sense of it.”
—Tyler Freres, Vice President of Sales, Freres Lumber

With the price of timber increasing, the port says they expect cost increases of potentially $2 million across the entire project. Revay says the port believed that the economic investment into the local mill towns, some heavily impacted by the Oregon wildfires of 2020, was worth the extra costs to procure locally, especially with Zip-O and Freres, among other subcontractors, “bending over backward” to make the project work. “Nobody else would make these glulams,” he says, “and we would be dead in the water.”

Freres admits they could have switched out materials to fit to the budget instead of sticking to the original agreement and taking a financial hit, but that would have hampered the final aesthetic.

“This is a hallmark project,” Freres says. “There are so many people walking through the building who will get a sense of it, and we can’t imagine a better advertisement for us than our own patented product.”

The roof will be not only visually unique but also seismically different. The design allows the roof to move up to 22 in. in any direction and the curtain wall system to move with it. To make it happen, Hoffman Skanska shifted isolators to the top of the steel columns. The curtain wall, which won’t break during movement, has hinged connections so it can move with the roof, independent of the foundation. Schneider says they’ve spent years working to come up with a system that can handle the seismic requirements. The interior mechanical systems also are designed to break away and remain in an “off” position for safety.

Portland, Ore., Likely to Get First Tall Timber Tower in the U.S.

First US Mass-Timber Tower Is OK'd