The two lines converge at these S curves, creating a longtime choke point of train traffic. During rush hour, Purple line trains, which run express up to Evanston, Ill., join the jumble on the same tracks as the Red line trains.

In hopes of preventing future spilled coffees, stumbles and uncomfortable leans, the CTA is straightening out the serpentine section with a $2.1-billion modernization that began in 2019 and is expected to be completed by the end of 2024. In addition to cutting out that S bend, joint-venture contractor Walsh/Fluor will build four new CTA Red line stations, replace 9.6 miles of 100-plus-year-old Red/Purple line track with new concrete support structures and track, add 23 miles of new traffics signals and even move a historic building 30 ft. The concrete structure will make it about 80% quieter than the wood and steel one. The project is being paid for by city tax-increment financing funds and federal grants obtained during the administration of then-Mayor Rahm Emanuel. CTA will keep running trains the entire time. A bracing frame will be installed on the outside of the Vautravers Building to lock everything together. Wolfe House Movers will then jack and move the whole building.
Photos by Jeff Yoders/ENR
*Click on the photo for more detail

“During construction, we’ll rebuild two tracks at a time while we’re running Red and Purple service on the remaining two tracks,” says Chris Bushell, CTA’s senior vice president for infrastructure, who is in charge of the largest project (cost-wise) in the agency’s history. Regarding the four new stations, Bushell said Stage A of construction will go from May 16 to late 2022, and then Stage B will start and continue until 2024. In Stage A, construction will happen on the east half of the tracks while train service runs on the west side. Then in Stage B, “we’ll flip that,” Bushell says.

“As with most designs within this complex project, multidiscipline coordination was a Herculean task that led to a successful design.”
—Bill Amrhein, Stantec Principal and CTA Red/Purple Modernization Structural Design Lead

A “straddle bent” design was necessary due to limited availability of support pier locations for the new, 45-ft-high elevated flyover structure in Lakeview. The Walsh-Fluor-led design-build team, including Stantec and EXP, selected and designed as the most viable solution a steel box supported at each end by a concrete column, spanning approximately 80 ft between columns “straddling” track structure below. The steel box was designed in accordance with fracture-critical provisions and includes internal member redundancy of tension elements.

“Longitudinal bridge girders are supported by, and ‘integral’ with, the steel box—this allows vertical clearance requirements to be met while minimizing the profile of this new structure,” says Bill Amrhein, Stantec principal and CTA Red/Purple line modernization structural design lead. 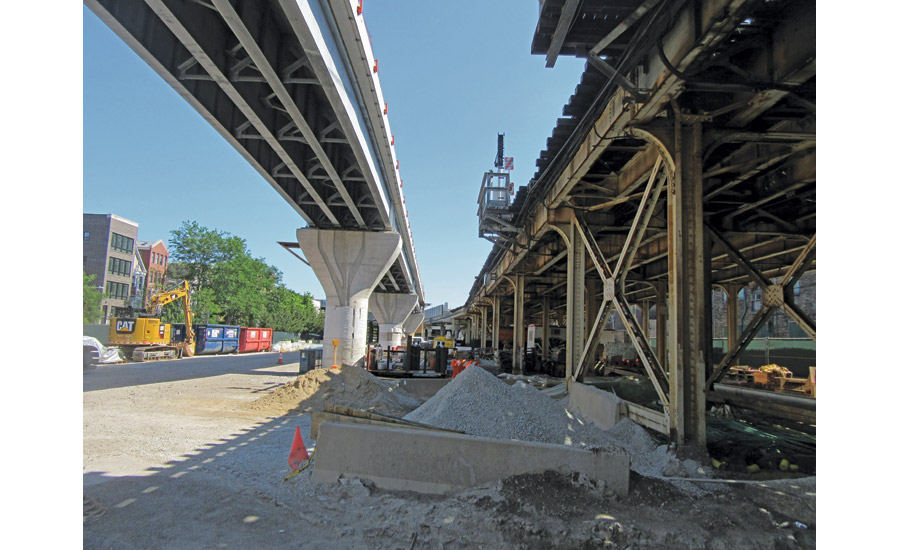 The 100-year-old CTA supports are riveted steel, whereas the new concrete ones have decorative grooves. Trains continue operating on the old tracks while work takes place on the new ones.
Photo by Jeff Yoders/ENR 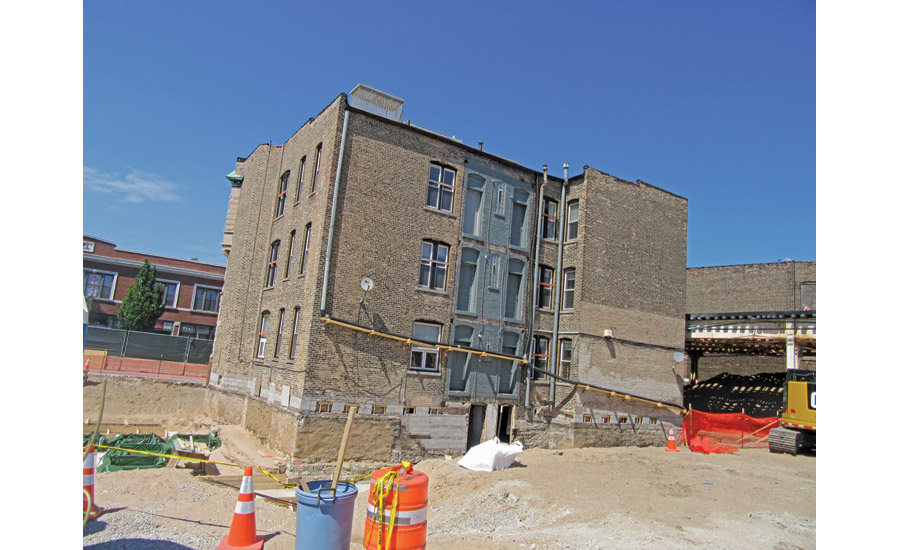 The 127-yearold Vautravers Building will move 30 ft west in August to allow a straightening of CTA track in Lakeview. The historic building will be renovated afterward.
Photo by Jeff Yoders/ENR

The flyover is already substantially completed and expected to be in service by the end of the year, but there’s another curve to navigate. CTA purchased 16 buildings to create the three-block, $570-million flyover and the track reconstruction in the Lakeview neighborhood, but one of them still stands. A 127-year-old residential structure known as the Vautravers Building will be jacked up from its foundation in August by subcontractor Wolfe House and Building Movers and moved 30 ft west to allow for a straighter track alignment. Walsh-Fluor crews are already digging a new foundation for the three-story, six-apartment building.

“We have worked to coordinate the project with CTA to make a plan to get it all done—but it is, ultimately, a very big job.”
—David Shier, Project Executive, Walsh-Fluor

“To secure the building’s exterior, a bracing frame will be installed on the outside to lock everything together. Wolfe House Movers will install large jacking beams through the building’s foundation,” says David Shier, project executive for the Walsh Group. “Then they will slide smaller ‘needle’ beams throughout the perimeter of the foundation walls to ensure the load is evenly distributed.”

Shier says that once the jacking frame is completed, a unified jacking system will be used to lift the building off its foundation. A series of slide beams and push rams will then be used to move the building west, and then south. The building will never actually drop from its elevation. To ensure adequate bearing on the new foundation, the building will first be temporarily secured in its final location and then the new concrete foundations will be poured and placed underneath it. Walsh-Fluor had a design study done prior to construction to affirm that a move was feasible with the structure’s current integrity. The team has been working on reinforcing it since the project began in 2019. CTA plans an interior renovation once the project is completed. Four new stations, including this one at Bryn Mawr, will be replaced as part of the CTA Red/Purple Line modernization.
Photo courtesy of CTA/Walsh-Fluor The new tracks will have concrete beneath them and the stations will receive a more modern design by EXP.
Rendering courtesy of CTA/EXP

“That greater span enables us to assemble this quicker,” he says. “As you can imagine, drilling those holes [each concrete support is drilled 80-90 feet to bedrock] is pretty difficult and time consuming. The fewer of those that we have to do, the better for the schedule and budget performance we need on the project.”

As Stage A progresses in 2021, a gantry system will be brought in to install track structure of the Red/Purple line in a longitudinal way that Bushell says will minimize impacts to the adjacent community. Track pieces will be precast off site and brought in so that there will be minimal fabrication of the structural components in the tight spaces of Uptown and Edgewater. 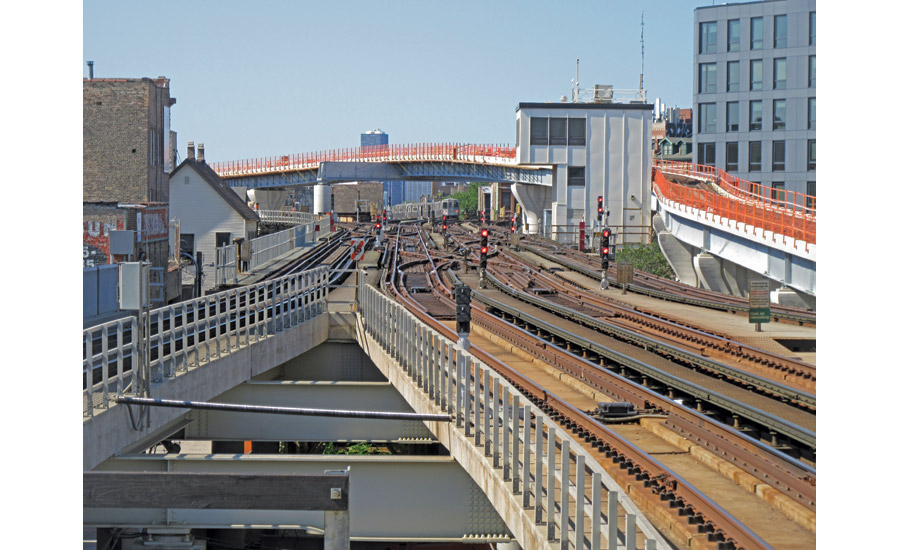 The flyover north of Belmont Red Line stop will allow northbound brown line trains to pass right over traffic and increase the number of trains CTA can run. It’s expected to be in service later this year.
Photo courtesy of CTA/Walsh-Fluor 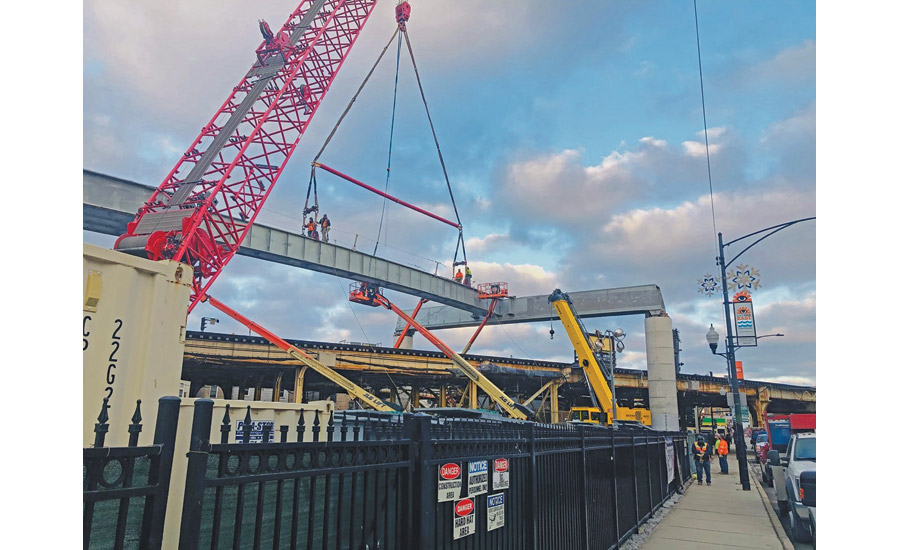 Walsh-Fluor had to place steel sections of track and the box girder for the straddle bent on very tight sites in the Lakeview and Wrigleyville neighborhoods to complete the flyover.
Photo by Jeff Yoders/ENR

“The gantry system was chosen because of the tight logistics,” Shier says. “Constructing a concrete bridge conventionally would have been more difficult. This method is best for the tight space. It allows construction to proceed adjacent to the active tracks which has a significant benefit to the overall construction duration.”

The CTA’s Lawrence, Argyle, Berwyn and Bryn Mawr stations on the Red line are all being replaced with new ADA-compliant stations designed by EXP. Walsh-Fluor constructed smaller temporary stations for riders to board from at Bryn Mawr and Argyle prior to the May 2021 beginning of construction on the Lawrence-Bryn Mawr portion of the rail project. Shier says the project is on schedule for its end of 2024 completion. A new signal system on 23 track miles between Belmont and the northern terminus of the Red line at Howard Street still needs to be installed along with the new track structure once the gantry system arrives later this year.

“We have worked to coordinate the project with CTA to make a plan to get it all done—but it is, ultimately, a very big job,” Shier says.