This website requires certain cookies to work and uses other cookies to help you have the best experience. By visiting this website, certain cookies have already been set, which you may delete and block. By closing this message or continuing to use our site, you agree to the use of cookies. Visit our updated privacy and cookie policy to learn more.
Home » Wild Rice River Structure Will Help Tame Floods in the Red River Corridor
Mountain StatesMountain States Construction Projects
Digging Deeper | Flood Control

Flooding has long been a fact of life for the Fargo, N.D., and Moorhead, Minn., metropolitan area, with spring thaws and storms sending the Red River spilling from its banks at least once a year. In recent decades, however, catastrophic floods—events that surpass the 100-year level of 37 ft at the Fargo river gage—have become more frequent and more expensive.

According to Kris Bakkegard, director of engineering for the Fargo-Moorhead Metro Diversion Authority, it was the 2009 flood cresting at just under 41 ft that changed the area’s approach toward finding more permanent solutions.

“That’s when the Corps of Engineers got involved in developing a model that would give us better protection against 100-year floods and improved capabilities for managing 500-year events,” Bakkegard says. 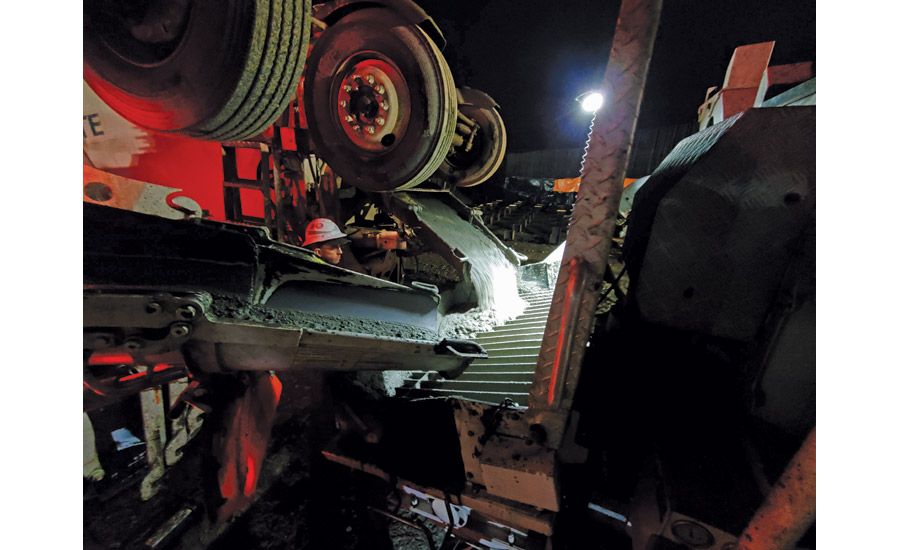 Now, after more than two decades of planning and collaboration involving federal, state and local agencies, the first major infrastructure elements of the Fargo-Moorhead Area Diversion Project are taking shape. Along with beefing up the cities’ flood protection infrastructure, the strategy calls for creation of a Corps-designed, 30-mile upstream staging area, called the Southern Embankment, which is equipped with three control structures.

Among them is the Wild Rice River Structure (WRRS) that is being constructed in what is currently an oxbow bend of the Red River tributary. The Corps-designed 114-ft-long, 105.5-ft-wide concrete water control structure will house two 40-ft-wide Tainter gates designed to help regulate river flows by storing excess water in a temporary lake for gradual release as conditions permit. 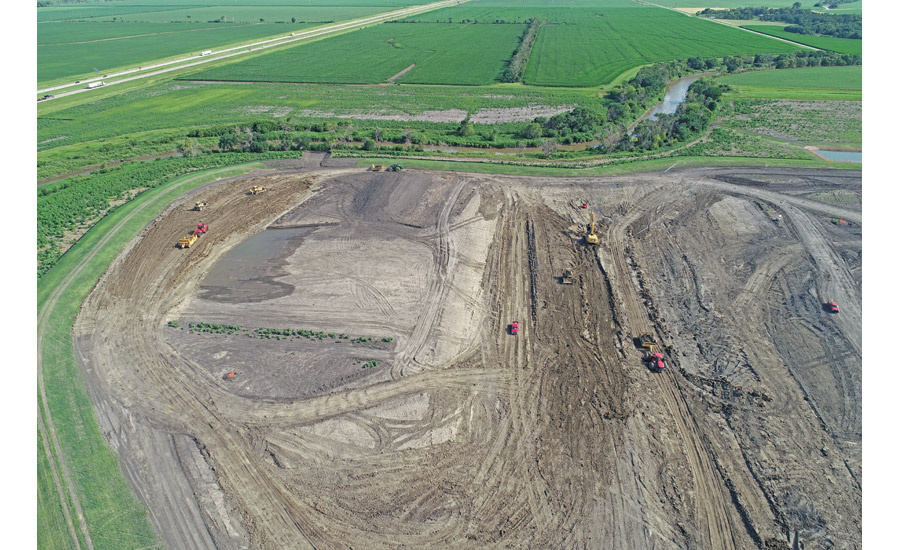 Duane Perkins, the Corps’ lead structural engineer for the $59.4-million WRRS, says that combined with aqueduct storage and other improvements within the Red River system, “we can keep floodwaters out of the Fargo-Moorhead community and maintain free-flowing rivers for recreation and other uses during the rest of the year.”

Just as floods have repeatedly tested the resiliency of the metro area’s 235,000 residents, WRRS has continuously challenged lead contractor Ames Construction Inc., Burnsville, Minn., since the four-year construction project got underway in April 2020.

Ames project manager Ben Herden recites a litany of complicating considerations, from protecting the riverside construction activity from the flooding its designed to prevent by constructing a 3,500-ft-long, 4- to 8-ft-high perimeter berm to keeping workers safe through the prairie’s near-constant winds and bitterly cold winters.

Then there are the area’s notoriously difficult subsurface conditions—a deep mix of elastic, unstable clays that retain moisture year-round. Even under the best of conditions, timber pads are required to keep cranes and other heavy equipment stable.

“Working in this area is a different beast,” Herden says. 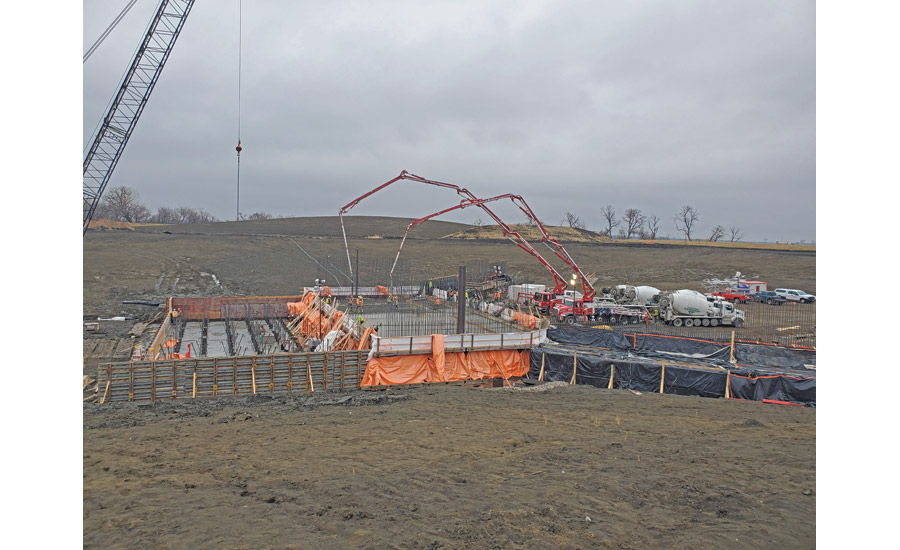 RACING THE COFFERDAM Ames Construction strived to complete as much foundation work as possible before the onset of winter to avoid delays in resuming full-scale construction the following spring.

So far, Ames has largely kept the beast at bay. In 2020, the project team excavated approximately 270,000 cu yd of earth and began driving the first of nearly 1,200 H-piles and 124 24-in.-dia steel pipe piles up to 85 ft deep to ensure a firm foundation for the 4- to 8-ft-thick reinforced concrete control structure, a 125-ft-long stilling basin and approach wall foundations.

Ames also began reinforcement installation and concrete placement for two control structure monoliths, part of the foundation system for the WRRS’s 8- to 10.5-ft-thick abutments, which rise to 60 ft at their highest points, and for the structure’s vehicle service bridge, mechanical platform and flood-control Tainter gates.

Perkins says the enhanced foundation system was necessary to counteract what will likely be decades of upward soil-rebound pressure. “You don’t want a structure of this type moving around,” he says.

Maximizing concrete and substructure work before winter was critical to project scheduling, Herden says, as it eliminated the risk of weather- and flood-related delays the following spring. “The more we can get out of the subsurface and above flood stage, the better,” he says. 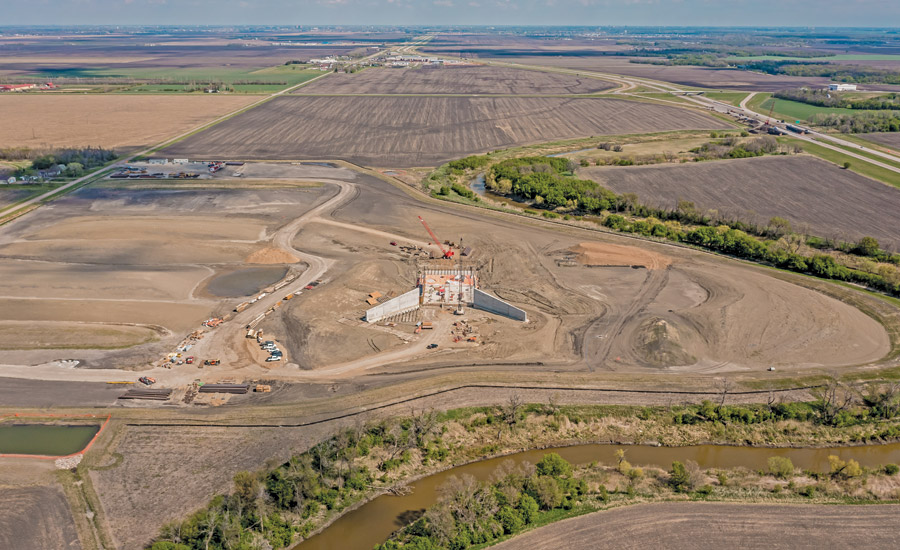 DIVERSION PLAN Upon the completion of construction, cofferdams will divert the river through the new structure until the existing oxbow section is permanently filled in.

With activity continuing at the site through much of the winter, Ames augmented its normal cold-weather safety practices with COVID-19 measures, such as smaller meeting sizes and passenger limits in work vehicles. Warming shacks, a staple of cold-weather construction, were replaced with more convenient parking so that employees could warm up in their own vehicles during lunch and breaks.

The early arrival of warmer temperatures this past spring allowed Ames to get a head start on additional pile-driving and concrete work, including one placement of 1,924 cu yd. Perkins says the mass concrete design has required close coordination with the construction team given the region’s unusual aggregate composition.

The large concrete placements also require an extra degree of logistical planning, Herden adds, given load restrictions on area highways. “You need to time the pours well in advance,” he says.

Weather is rarely far from the project team’s mind, whether it’s prairie winds gusting above the 25-mph restriction on crane work or clouds building up for heavy rain. In addition to worsening the slippery conditions of the non-absorbent clays, a substantial amount of precipitation can quickly carry sediment into unfinished excavations.

To counter this threat, Ames has implemented a dewatering system that can clear the site of a day-long, 2-in. rainfall in just 24 hours. Sediment basins and specially configured channels help keep discharges to the river under control.

“So far, the system has worked like it’s supposed to, although we still need a day or two after a rain event for the sun and wind to help dry out clays,” Herden says. 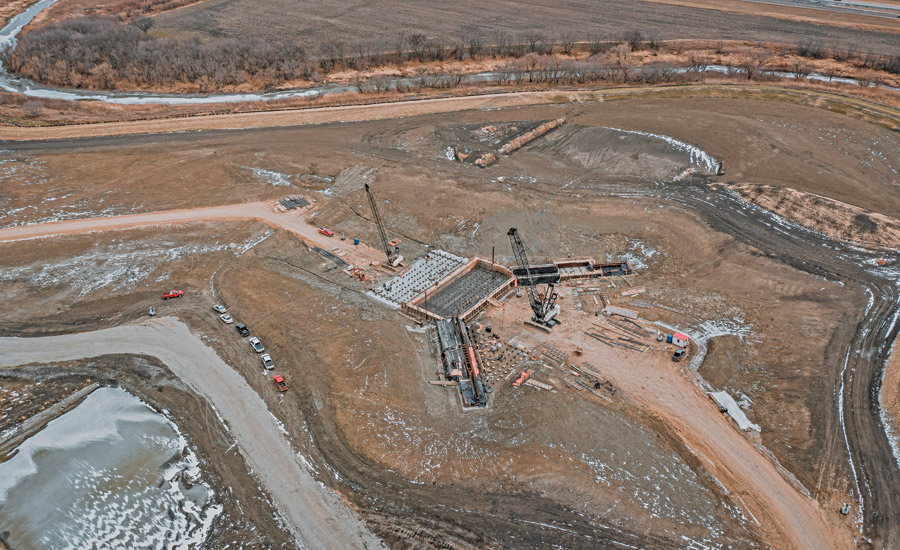 Favorable weather will go a long way toward helping Ames achieve its WRRS agenda for 2021, which calls for having the abutments ready to be backfilled by September, followed by the application of 75,000 cu yd of surcharge that will remain in place for nine months. The project team will then focus on completing the 10-ft-wide pier that will separate the Tainter gates, channel baffle blocks and other structural imbeds.

Scheduled tasks for 2022 include surcharge removal, construction of dam walls and installation of the Tainter gates, currently being fabricated at a steel mill in Alabama. Concrete trunnion girders, designed to transfer the gates’ lateral loads into the pier and abutments, will be anchored by approximately two dozen 38-ft-long, 2-1/4-in.-dia, high-strength steel bars. Rather than being grouted into place with concrete, Perkins says the bars will be insulated with an innovative corrosion-inhibiting gel and secured in an anchorage gallery incorporated into the abutment.

“This system greatly improves access and helps with long-term inspection and maintenance,” Perkins says. “In the event a bar bends or fractures, workers can simply remove the nut off one end, pull the bar out and install a new one.”

The fall of 2022 will see another major excavation phase at the project, with diversion of the river channel into the WRRS. In 2023, Ames will backfill the existing channel and complete the structure’s east and west levees, marking the project’s substantial completion. 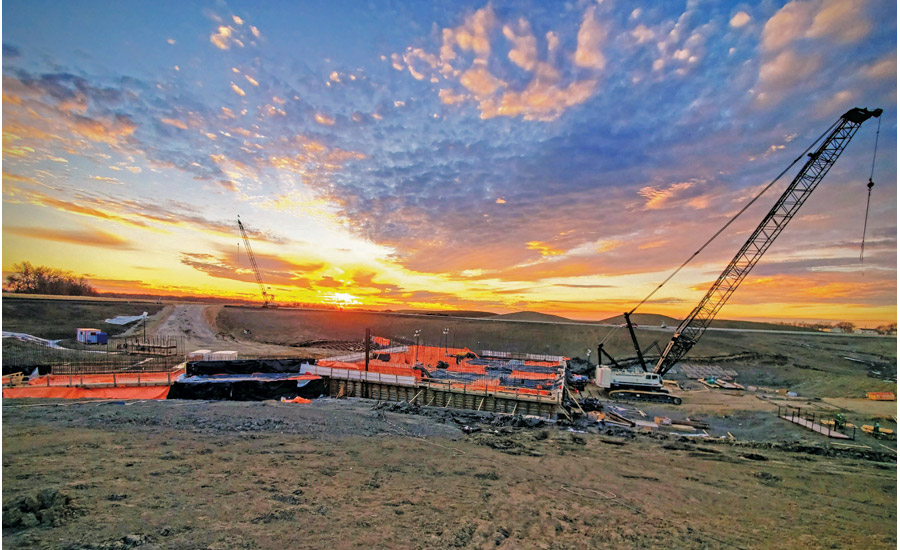 WINTER WARRIORS Ames Construction has managed to maintain some level of activity at WRRS through all but the worst weeks of North Dakota weather.

Bakkegard says the entire Fargo-Moorhead Area Diversion Project is scheduled to be complete by 2027, “making the following flood year [the time] when we’ll finally be in a good position to handle 100- and 500-year floods.”

While improved flood protection and safety for the Fargo-Moorhead area is, of course, the primary goal of WRRS, Herden says the project team will carry away a sense of pride for having overcome so many unique and complex project challenges.

“It’s almost a point of pride among contractors and engineers to outthink and out-engineer these obstacles,” he says.

Tired of Waiting for Feds, Water Board Pursues Plan B for Red River