This website requires certain cookies to work and uses other cookies to help you have the best experience. By visiting this website, certain cookies have already been set, which you may delete and block. By closing this message or continuing to use our site, you agree to the use of cookies. Visit our updated privacy and cookie policy to learn more.
Home » Former NJ Army Base $2B Makeover is 'Buzzsaw' of Activity
New YorkNew York Construction ProjectsBuildingsGovernmentProject deliveryRisk
Site Reuse

Take a developed property the size of New York City’s Central Park with 5 million sq ft of building area, program in new construction or renovation over 20 years and across three dozen parcels for 1,600 housing units, 300,000 sq ft of civic or government space, 500,000 sq ft for retail and 2 million sq ft of offices, and you have a pretty ambitious undertaking. The $2-billion effort to redevelop Fort Monmouth, a decommissioned former U.S. Army base in the thick of New Jersey’s suburban sprawl, is all kinds of ambitious.

The 1,126-acre site, split into two large sections and spread across three municipalities, is a buzz saw of construction activity, with various projects completed, another dozen in the works and several more set for new development. About 70% of structures on the former base are set for demolition, and nearly 80% of the property is sold, under contract, in negotiations or set for RFP bidding.

The massive effort is taking shape under the oversight of the Fort Monmouth Economic Revitalization Authority (FMERA), a state agency with representation from the towns of Oceanport, Eatontown and Tinton Falls and county, state and federal authorities— all tasked to turn over the properties to private developers and in it now for the long haul, says John Coffey, mayor of Oceanport. He won local notice early on for opposing the redevelopment, got elected in 2015 as a write-in candidate and has since embraced the projects that will transform his town.

“When this is all complete, Oceanport is not going to look like it did 30 years ago,” he says. “The decision of whether that’s a good or bad thing is for 30 years from now. But right now we have found a way to have a substantial say in how this moves forward.” Reshaping 430 acres of the former base in his town is no walk in the park, with a complex mix of state and federal mandates and unique local needs, Coffey says.

“It’s a long slog, a laborious process,” he says. “There still might be development snafus. FMERA will be with us for the next decade at least.”

The program has attracted private developers of all kinds—from local residents who have stepped up with investments in their own towns to big players such as Somerset Development, a New Jersey firm with national scope that will break ground this year on the Lodging Area, a 15-acre parcel with 144 market-rate townhomes, 36 affordable units and a waterfront promenade.

“Despite the ongoing pandemic, we anticipate 2021 will see renewed acceleration and positive momentum across all new and ongoing projects,” said Bruce Steadman, FMERA executive director, in a statement on the Somerset project. “We look forward to the forthcoming addition of Somerset’s new residential community in Oceanport as well as the rehabilitation of one the fort’s many historic assets for reuse.”

Activity this spring also includes FMERA’s request for offers to purchase an 82-acre parcel in Eatontown that has 1 million sq ft of buildings set for demolition. The site is considered a main gateway into the former base, with FMERA calling for a mixed-use neighborhood village-style development.

The opportunity to participate in the transformation of the three towns is a unique opportunity, but the complex process has its challenges, says Trip Brooks, who is developing the Park Loft events space and partnering on the multistructure Barker Circle redevelopment. “The state agency controlled the zoning and set the ground rules, but you still go to the town for planning approvals,” he says. “The box they’ve set up makes it a little more predictable. But in the end you have to complete the project—and if you don’t, they can take it back.” 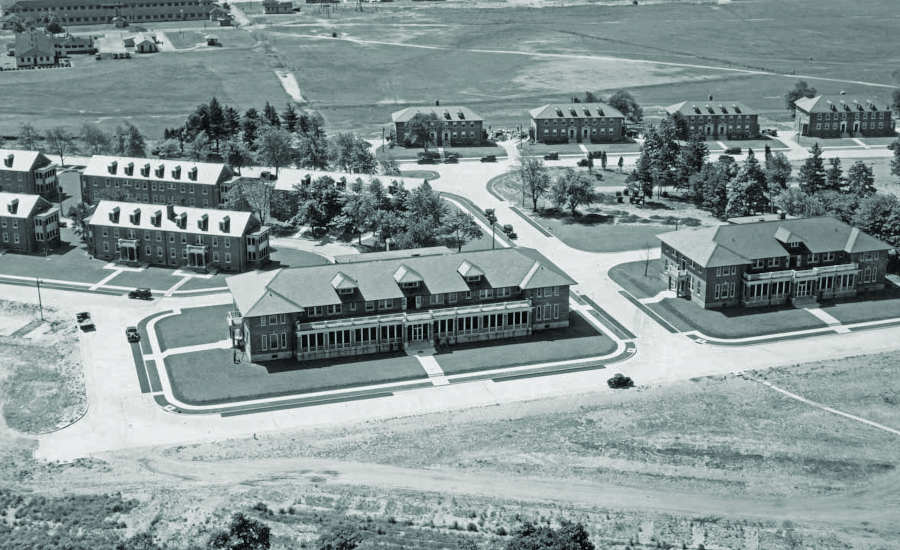 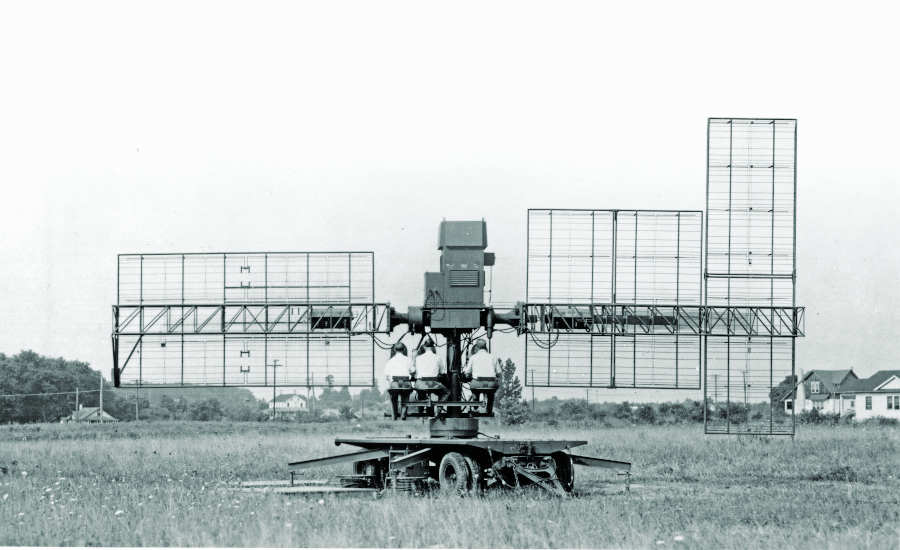 EARLY LEGACY
Fort Monmouth began operation more than a century ago and became a key military center for technology, including the invention of the first aircraft radar system (below) in 1938 that was key to Allied victories during World War II.

The former Fort Monmouth, built in 1917, was an early Army innovation hub, with a rich history that includes the original development of radar, cellular technology and satellite communications. Originally selected in the 2005 round of federal base closures, it was finally decommissioned in 2011, with remaining functions transferred to a Maryland site. But redevelopment took several years to start as FMERA acquired land from the Army in 2014 and 2016. Several rounds of negotiations at the local, state and federal levels led to the Fort Monmouth Reuse and Redevelopment Plan, which is now effectively the site master plan.

The plan envisions not only significant new housing but also extensive commercial development, including a focus on technology, communications, health care and defense sectors as well as higher education, entertainment, recreation and the arts.

Some projects got out of the gate more quickly, and a few—such as the four-story Russell Hall building that now houses a cloud computing company, the East Gate and Liberty Walk residential projects from RPM Development, Patriot Square’s townhomes and Anthem Place’s single-family homes—are complete, with about 1,000 residents already on site. Oceanport moved its borough hall and police station onto 13.3 acres of the base earlier this year.

But many more projects are only now hitting their stride. Major ongoing efforts include developing the base’s former Squier Hall administration building into a 350-student satellite campus for New Jersey City University; the 26-acre, 260,000-sq-ft Baseline project from Denholtz Properties and OPort Partners that will add six new buildings and an adaptive reuse of the former base commissary; and the Alley, the redevelopment of an old bowling center, which broke ground last month.

Upcoming projects include Barker Circle, a retail, office, arts and residential community within a historic district; transforming the 32-acre Myers Center site into a new medical complex for RWJ Barnabas Health that will include a hospital, research facility and medical offices; the high-tech, 100,000-sq-ft McAfee Complex intended to anchor a 45-acre green tech campus; and Somerset’s Lodging Area.

Fort Monmouth is not a typical base redevelopment as no two are alike, says Jeffrey Finkle, president and CEO of the International Economic Development Council, which monitors repurposing of major federal properties. But the New Jersey site is clearly on the more active side of the spectrum, with desirable land and strong developer interest, compared with bases in rural areas or with extensive cleanup required, he says. “A base in New Jersey is a little bit like land in Southern California,” he says. “There are people chasing it.”

Similarly, redevelopment coordination among entities is not a universal feature but has precedence in areas where there is ample development interest, Finkle says. “There are some developers that have longstanding engagements pursuing projects on former bases,” he adds. That layered approach has required a dedicated and concentrated effort to move forward, says Ken Gold, director of acquisitions and development at Somerset Development. “It was very complicated,” he says. “But our team worked hard and got the approval.”

The process has resulted in most properties in Oceanport at least programmed for current or future development, Coffey says. The biggest piece left is an 80-acre site that will probably have residential housing, part of 740 units that could increase the town’s population by one-third, he says. “We’ve come to a place where we understand that development is important and that it’s not going to look like anything in Oceanport,” he says. “We’ve been able to work through our differences.”

Oceanport also contains the 20-acre Barker Circle project, which is still in negotiations for final approval but should break ground later this year, Brooks says. The seven buildings include the former base firehouse, a former theater later transformed into a museum and five old barracks structures. The firehouse is likely to become a restaurant space, the old theater will have an office or arts use, one former barracks will be an office and the remaining four barracks will be rehabilitated to house rental apartments, he says.

The steel and concrete barracks are in particularly good shape structurally, Brooks says. “They were built in the 1920s and ’30s, but you walk around and it’s like they were built yesterday,” he says.

Brooks also is lead developer on the former 16,000-sq-ft dance hall, which is under renovation to become an events space and is set to open early next year. It has required partial demolition, reconstruction of nearly all flooring and roofs and other rehabilitation work, but some features will remain, including a unique main area framed by 40 ft to 60 ft trusswork and a mezzanine, he says.

“Buildings on the fort are interesting, with things that local inspectors didn’t necessarily see, so some of the stuff that the army built makes you say ‘wow,’” he says. “The truss system and wood columns are a spectacular feature.”

Somerset’s plans for the Lodging Area are set to start this year, after the developer won the site bid in 2017, negotiated contracts in 2018 and then saw the final approvals and original start date pushed back by delays caused last year during the COVID-19 pandemic, Gold says.

The main feature is 2.5-to-3-story townhomes built alongside a creek through the property, most with waterfront access via an esplanade. The units will feature high ceilings, rear-facing two-car garages and private decks. The goal is to break ground this summer, Gold says.

“There is significant demolition and sitework to be done,” he says. “We’re knocking down five existing buildings and installing all new utilities. But the first units should be ready in the first or second quarter of 2022.”