This website requires certain cookies to work and uses other cookies to help you have the best experience. By visiting this website, certain cookies have already been set, which you may delete and block. By closing this message or continuing to use our site, you agree to the use of cookies. Visit our updated privacy and cookie policy to learn more.
Home » On the Scene: July 2018 Reports from New York Industry Events
New YorkNew York Construction News

KEYWORDS New York On the Scene
Order Reprints
No Comments

The short documentary “Unknown New York: The City That Women Built” premiered in June at a party hosted by the Beverly Willis Architecture Foundation, whose namesake wrote and directed the film— just the latest of her endeavors to showcase female architects.

“I call this a film about a map,” Willis said after the screening, held at the SVA Theater in Manhattan. “What was important was … trying to show the volume” of women involved in constructing the city’s skyscrapers, bridges, gardens, cultural centers and subways. Some 350 projects designed or engineered by women are packed into the 17-minute movie. “When I was 75 years old, I discovered that women were not included in architecture history,” recalled Willis, 92. “I hope [the film makes people] realize the most prestigious work is being done by women!” 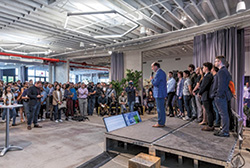 URBAN-X chose seven start-ups from 400 applications to participate in the fourth cohort of its accelerator program for start-ups reimagining city life, including construction and infrastructure. Backed by carmaker BMW/MINI and venture capital fund Urban.Us Capital, Brooklyn-based URBAN-X will spend five months helping firms develop and bring their solutions to market.

Among the start-ups participating, Avvir provides a construction project monitoring service that automates data acquisition, visualization and analysis to provide real-time insights and to detect defects, which can help clients save money by avoiding rework. Another, ClearRoad, helps government agencies automate toll road pricing without traditional proprietary hardware infrastructure. Other start-ups in the cohort, announced in May, are: Rentlogic, Campsyte, Open Data Nation, Park & Diamond and Sapient Industries.

The Percy Jobs and Careers Center, which works with SUNY Maritime College in the Bronx to train craftworkers, saw five students graduate in May to become journeymen electricians and plumbers. Each Percy program, which comprises daily on-the-job training and a few night classes per week, takes three to five years to complete.

Graduates  are electricians Zwade Amsterdam and Keyonn D. Jemmott, who work at A&S Electrical Inc., and Anthony Buono, employed by Yonkers Electrical Contracting Corp., and plumbers and steamfitters Peter Siderias and Ryley Peterson, who work for Pearl River Plumbing, Heating and Electric. “We need skilled tradespeople like electricians, plumbers and ironworkers. I congratulate the graduates for their hard work. … I know they have bright futures,” said New York state Sen. James Sanders Jr.


LifeSci for the Real Estate Guy

At the Life Sciences 2018 Real Estate Development Symposium in June, there was consensus: Scientific laboratories and offices are a big revenue opportunity in the region. After all, NYC Mayor Bill De Blasio’s LifeSci NYC sets aside $300 million to developers for tax abatement when they build life science spaces and another $100 million in capital spending to create an innovation hub. 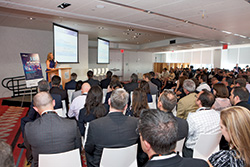 It’s not easy to renovate old buildings for these tenants. Ventilation, climate control, ceiling heights and energy efficiency are among the traditional challenges of both wet labs, where researchers handle chemicals, biological organisms and other “wet” materials, and dry labs, which may use large equipment and are more like traditional office spaces. And for life science firms, “it wouldn’t work to have the C-suite far from the development team,” Blake Adair, chief of staff of biomedical engineering firm Epibone, told the crowd,

Still, science organizations want to evolve their workplaces, like having collaborative spaces where researchers can discuss projects or take breaks from the lab. “Life science spaces are going to be much different from today’s,” said event host Nancy J. Kelley, president and CEO of Nancy J. Kelley + Associates, which builds projects for science and medical clients.

Green buildings and infrastructure supporting renewable energy won’t just help whatever metropolis they are in. “It’s not just about what’s good for New York City, it’s if we can do it here, then other cities can do it,” Mark Chambers, director of sustainability for Mayor Bill de Blasio, said during the Future of Sustainable Cities event that HOK hosted to kick off June’s American Institute of Architects national meeting.

Architects, structural engineers and developers are in a powerful position to encourage clients and tenants to go greener, they noted. “You are the one in front of the client,” said Giles, whose global charitable trust calls itself the grandfather of green building rating systems. He added that owners “mustn’t focus on new buildings; we’ve got to focus on existing buildings too”—applicable worldwide, but particularly apt for NYC.

For the Salvadori Center’s Tall Tower Challenge in June, 22 student groups paired with New York STEM professionals to create a structure out of straws, glue and cardboard that could support as much weight as possible using as little material as they could. The kids came from 13 schools and worked with peers they had never met before. The challenge topped off the NYC-based center’s math and science study programs this year.

Salvadori staff declined to proclaim a winning team, saying the challenge was about collaboration and not competition. The kids seemed to enjoy it anyway. As one volunteer said: “The students were really excited about the task and eager to do a good job with it.”