This website requires certain cookies to work and uses other cookies to help you have the best experience. By visiting this website, certain cookies have already been set, which you may delete and block. By closing this message or continuing to use our site, you agree to the use of cookies. Visit our updated privacy and cookie policy to learn more.
Home » On the Scene: Industry Events, ENR New York November 2018 Edition
New YorkNew York Construction News

Construction accounting, tax and consulting firm Anchin Block & Anchin hosted its 13th annual State of the Construction Industry Conference at the Yale Club in Manhattan on Sept. 28. Experts discussed how the current building boom is different than past cycles, ways to attract the next generation of construction industry professionals, technology that will shape upcoming infrastructure projects and the future of public-private partnerships.

Rick Cotton, executive director of The Port Authority of New York and New Jersey, noted that agency’s role “ should be to set high standards in the interest of the public while letting the private sector do what it does best—design and build.”  Phillip Ross, accounting and audit partner at Anchin and leader of its industry practice noted that with booming work and increasing employment “this is an exciting time for the New York City construction industry.” 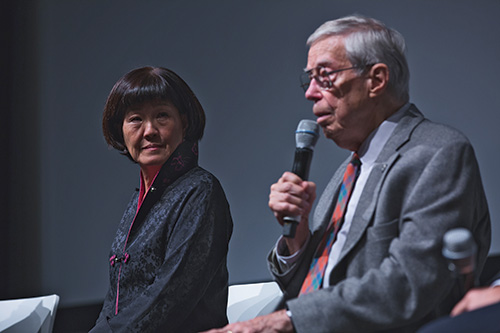 The Architecture & Design Film Festival kicked off Oct. 16 in Manhattan with the premiere of “Leaning Out,” a documentary about Leslie Robertson, the lead structural engineer of the Twin Towers. That’s just one of numerous projects under his belt; others include the U.S. Steel headquarters in Pittsburgh, the Century Plaza Hotel in Los Angeles, Cleveland’s Rock & Roll Hall of Fame and Museum, the Bank of China Tower in Hong Kong and the Shanghai World Financial Center.

“When I talk to young people, I tell them to be great communicators,” said Robertson, pictured above with fellow engineer and wife SawTeen See, during a panel discussion after the screening. “He’s really bringing together the AEC industry,” said Basia Myszynski, one of the movie’s co-directors, adding that the engineer has during his “entire life” bridged gaps beyond the construction world—for example, with his human rights activism.

The film goes into detail of the World Trade Center’s design, including dampers to reduce the skyscrapers’ swaying, and highlights Robertson’s despair when the towers collapsed on 9/11. But he urged young engineers not to let that example make them wary of challenges. 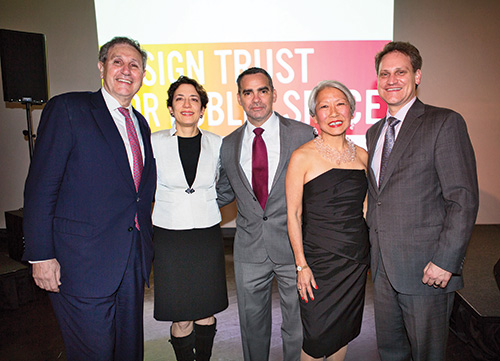 At the benefit, which raised more than $360,000, attendees learned how the trust is revitalizing underused spaces. The nonprofit brings together agencies, community groups and private sector experts, guided by social justice, equity and environmental sustainability, to create parks, plazas and other public spaces. It saved the High Line structure in Manhattan, now an urban park, and last summer its pilot EL-Space project transformed a large, unused section underneath the Gowanus Expressway at 36th St. and 3rd Ave. in Sunset Park, Brooklyn, into a dramatic public space.

Design Trust for Public Space executive director Susan Chin (pictured second from right, next to Eric Rothman, the trust’s board chairman) said of the honorees: “They activate neighborhoods for all New Yorkers through planning and economic development, transportation and policy, and design and construction. They have helped shape dynamic public spaces in areas where communities lack them.” 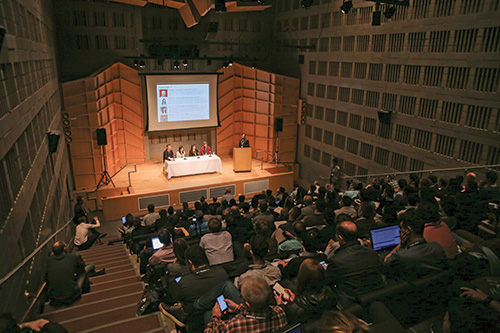 Thornton Tomasetti held its annual AEC Tech 2018 on Oct. 25-28 at Baruch College (in photo) and at the engineering firm’s Manhattan office.

The last event was a 26-hour hackathon at the engineering firm’s offices, where programmers and developers of all levels collaborated, networked and generated new ideas and processes for the AEC industry.