Work is rapidly progressing in northeast Houston on the $2.4-billion reconstruction of US 290, which spans 38 miles and includes a 10-mile extension of the HOV lane. The massive undertaking that began in 2011 has required 375 right-of-way acquisitions and more than 600 utility relocations. The project also has seen multiple setbacks, from securing funding to sequencing construction routes to keep traffic flowing.

A major investment study into the US 290/Hempstead program began back in 1999, when the Texas Dept. of Transportation (TxDOT) sought mobility improvements due to explosive growth on the northwest side of Houston, says Frank Leong, West Harris County area engineer at TxDOT.

The highway program reconstructs US 290 and builds the parallel Hempstead Tollway, covering a corridor of varying widths. At 38 miles long, it extends from the interchange of I-10/I-610/US 290 northwest to near the Harris and Waller county line, Leong says.

“We anticipate program main-lane construction to be complete by the end of 2018.”

The program received its record of decision in 2010, and construction officially began in June 2011. TxDOT selected HNTB as program management consultant (PMC) and opened an office dedicated to the program in 2006.

Stuart Straznicky, south Texas area manager at Webber, says the team collaborated closely with TxDOT to develop alternate concepts early on, in hopes that the sessions would save TxDOT both time and money in the long run.

“Several of these concepts included modifications to traffic control plans, modifying underground and utility routes and minimizing construction traffic in the existing traffic lanes,” he says.

“Early in the development of the project, TxDOT and HNTB subdivided US 290 into design and construction segments that fostered competition, resulted in the best value for the state and promoted safety while serving as independently constructible projects,” says LeAnne Napolillo, HNTB vice president and US 290 PMC program manager.

The initial phase reconstructed the I-10/I-610/US 290 interchange, a pinch point for three major thoroughfares in the Houston area, Napolillo says. Construction bids continued with the US 290 at Beltway 8 and US 290 at SH 6 interchanges, both of which improved local connectivity with new continuous frontage road systems. The work also enhanced safety and increased US 290’s main-lane capacity.

“Projects were put out for bid in a generally east-to-west manner, with the first bid opened in 2011 and the last projects bid in 2015. Five of the projects—A, B, C-2, G and K— are substantially complete,” Leong says.

“We anticipate program main-lane construction to be complete by the end of 2018,” he says.

“The city of Houston is the fourth-largest metropolitan area in the United States and the largest in Texas,” Napolillo says. “The US 290 corridor in northwest Harris County is one of the most mobility-constrained corridors in the region and includes multiple segments on the state’s 100 most congested roadways list.”

If the US 290 program were not built, experts estimated that by 2035 the congested stop-and-go traffic along the roadway would have increased to more than 12 hours each day, Leong adds.

“Despite funding issues, TxDOT proceeded to implement a phased approach to reconstruct US 290,” Napolillo says. This original implementation schedule extended program improvements out to 2036 with construction bids.

“Through agency partnerships and utilization of state bond funding, TxDOT identified funding to expedite the construction of the US 290 program, resulting in some portions of the corridor opening approximately two decades ahead of schedule,” Leong says.

TxDOT started design of the corridor to position the project for potential available construction funding, Leong says, but US 290 is a design-bid-build project.

To solve that, TxDOT and HNTB revised the US 290 improvements to accommodate the HOV lane in the interim, Leong explains. The changes added a 1.2-mile-long HOV bridge at the I-610 and US 290 interchange within a constrained right-of-way as well as partial demolition of an existing HOV wishbone ramp. That provided access to and from the frontage roads on either side of the freeway to the HOV lane in the center of US 290.

Crews also accelerated reconstruction of five spans on the existing HOV connector to the transit center, completing that work in 21 days. Meanwhile, construction of an interim HOV connector within 17 in. of an existing overhead electric transmission tower helped the team avoid working within a contaminated materials site.

“Utilization of a temporary shore tower allowed for maintenance of US 290 HOV through traffic during reconstruction of the T-ramp bridge,” he says.

Then, in 2014, after most of the US 290 corridor bids were issued, the county rescinded primacy on the Hempstead Corridor to TxDOT and reduced its partnership level on US 290, Leong adds.

“This reallocation of resources required implementation of a revised lane configuration,” he says. 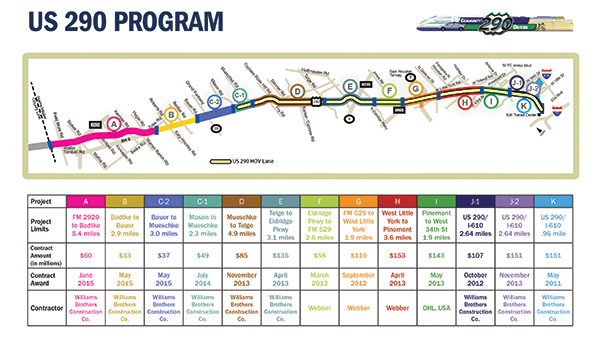 The entire US 290 program has been divided into 13 segments.
CHART COURTESY THE TEXAS DEPT. OF TRANSPORTATION/US 290 PROGRAM MANAGEMENT CONSULTANT

Other challenges on the project included addressing right-of-way constraints, such as with the SH 6 to US 290 Direct Connector. To improve mobility at the US 290-SH 6/FM 1960 intersection, the US 290 team added a 0.8-mile-long bridge over the future high-capacity transit corridor, the Union Pacific Railroad, Hempstead Road, US 290 and Wortham Boulevard and added a direct connection from SH 6 northbound to US 290 eastbound.

Then, to avoid reconstructing the US 290 at Beltway 8 interchange, US 290 main-lane capacity was added at the interchange by adding collector-distributor roadways. That helped the team avoid costly reconstruction of the entire interchange.

“High-early-strength concrete pavement was used for a critical phase of the US 290 main-lane construction, coupled with a milestone incentive for pavement completion over a weekend to minimize impact to drivers during construction,” Leong says.

The US 290 program is also the first in the Houston region to utilize collector-distributor (CD) roadways, Napolillo says.

Built at the congested US 290/Beltway 8 interchange along both US 290 inbound and outbound, the CD roadways allow motorists their own space from which to enter and exit the roadway, she explains.

“In the preconstruction condition, US 290 motorists entered and exited the main lanes in the middle of the interchange, negatively impacting main-lane traffic. The CDs combine ramp movements onto independent roadways located between the main lanes and frontage roads, improving mobility by reducing disruptions to the main lanes,” she says.

Another feature of the new stretch of US 290 is a next-generation concrete surface (NGCS), which is being used on main-lane roadway pavement, Leong says.

In addition to providing motorists with a smoother drive, the diamond grooving allows the road to maintain its texture longer, which results in a safer surface in the long term. “The lack of an upward texture can also decrease tire and pavement noise by 75%,” Leong adds.

Another component being integrated into US 290 is compliance with the TxDOT Houston District’s Green Ribbon Plan for aesthetic development throughout the corridor, Leong says. Under this plan, crews will place trees and plants along the highway to mitigate the effects of air pollution.

Through May, crews have placed 3.5 million sq yd of concrete, 318,239 linear ft of prestressed concrete U-beams (U54) and 71 million lb of structural steel tub girder.

“Fortunately, we have experienced minimal material-supply issues. Since the Houston market is one of the largest construction markets in Texas, we do periodically experience heavy demand cycles for certain materials that put a strain on supply chain,” Straznicky says. “It is crucial that we maintain constant communication with our material suppliers and keep them abreast of our schedule so they can make us aware of any potential issues in material deliveries.”

As of May, Webber alone has worked more than 1.6 million man-hours on the US 290 project, with an overall OSHA incident rate of 1.25.