This website requires certain cookies to work and uses other cookies to help you have the best experience. By visiting this website, certain cookies have already been set, which you may delete and block. By closing this message or continuing to use our site, you agree to the use of cookies. Visit our updated privacy and cookie policy to learn more.
Home » Best of New Mexico: St. Francis af Assisi Cathedral Basilica Restoration
SouthwestSouthwest Construction ProjectsFeatures 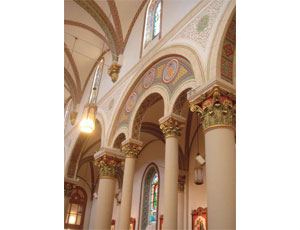 This iconic cathedral is Santa Fe’s most photographed landmark. In 2008, it was discovered that the structure was in danger and needed immediate restoration due to 3-in. cracks lining the stonework and a 400-lb cross atop the cathedral that was teetering on just inches of granulated stone.

Originally built between 1869 and 1886, the church’s exterior was cleaned while damaged limestone block was replaced. Historical photographs were consulted to preserve the design’s integrity. The south tower houses four new bells, the largest of which weighs 3,000 lbs.

Equally painstaking interior work included restoration of the 100-year-old stenciled ceiling and arch details, which had been rendered virtually invisible by years of smoke and incense, along with an ill-advised 1967 renovation.

The project revitalized this Santa Fe centerpiece just in time for the city’s 400th anniversary celebration.

Best of New Mexico: Our Lady of Guadalupe Franciscan Friary