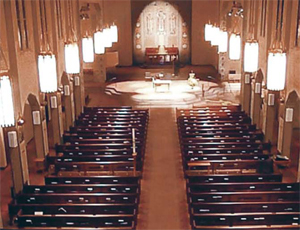 Lewis performed a major seismic upgrade at this historic Seattle church, including new concrete columns up the 150-ft steeple, a tension system, and structural shear walls. Lease removed and reinstalled stained glass after retrofitting with storm windows, constructed a new altar, restored the entire chapel floor, and renovated with new finishes, casework and flooring. Added scope included architectural floor grilles. The raised altar needed to be increased in size, but without exceeding the load capacity of the existing suspended slab. Lewis and the structural engineer collaborated to achieve an innovative solution, involving a combination of a wood framed structure with a 2-in thick topping slab. The steps leading to the raised platform were designed to act as a cast in place beam, spanning between the beams supporting the suspended slab.

Structural upgrades to the bell tower required access, but at the upper levels this was difficult. The team’s solution was to cut a 4 x 6 opening in the center of each slab, after carefully analyzing its load capacity. Lewis reinforced the slab edges as necessary, accounting for the weight of not only the materials on each level, but the workers and equipment as well. Two sides of the opening were reinforced with small steel beams that doubled as attachment points for safety harnesses. An electric winch was suspended from a temporary hoisting beam at the top of the bell tower and used for all hoisting in the tower.

Column forms were prefabricated on the ground and hoisted onto each level for the construction of the new columns.