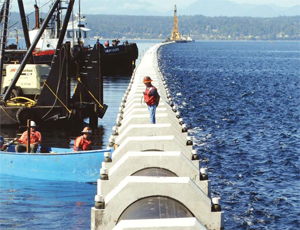 The outfall project construction, the final leg of the Brightwater Treatment Plant effluent line, was completed a year ahead of schedule in late 2008 at a cost of just over $29 million, 23% less than the original estimate of $38 million. It also won McGraw-HIll’s Best of the Best award in the same cateory. Best of the Best submittals are taken from all the regional winners and judged by a national panel.

The outfall consists of twin mile-long, 63-in diameter High Density Polyethylene (HDPE) pipes with concrete ballast anchors. Each pipe terminates in a 250-ft diffuser section having 30 six-in diameter ports to disperse the effluent. The diffusers on the two parallel pipes are staggered along the alignment to provide a 500-foot long mixing zone. The pipes were assembled by heat fusion north of Seattle at a Port of Everett fabrication site along the Snohomish River and stored in the river until deployment. Precast concrete anchors were added to the HDPE pipe at the Everett yard prior to pushing the pipe into the river.

Triton placed each pipe in one continuous operation using a float and sink method. The pipes were connected to the onshore end and sunk by pumping water into the onshore end while controlling the release of air from the offshore end. Triton also had to keep a predeterimined tension on the pipe end at various stages to ensure it was not overstressed while going through an S bend and maintaining a specific internal pressure on the pipe to make sure it didn’t collapse.

Each pipe was sunk in one day of continuous operation after being floated 17 miles from the assembly site to the job site for installation.