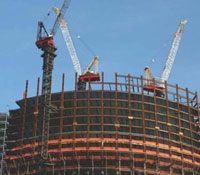 Contractors see the current market as an historic struggle, but the ones that intend to make it through are focused on diversifying their coverage, investing in staff skills training, deepening client relationships, and making strategic moves such as acquisitions.


** Because of an error, Tishman Construction was inadvertently omitted from the originally published table.