This website requires certain cookies to work and uses other cookies to help you have the best experience. By visiting this website, certain cookies have already been set, which you may delete and block. By closing this message or continuing to use our site, you agree to the use of cookies. Visit our updated privacy and cookie policy to learn more.
Home » Blogs » Notes on the Northwest » Light Rail, LNG Projects, Washington Budget, And Building Marine Facilities

John Guzzon
No Comments
KEYWORDS Gensler / light rail / Oregon / Pipeline / Washington
Order Reprints
FERC Denies Proposed Oregon Natural Gas Project
The Federal Energy Regulatory Commission rejected the Pacific Connector Gas Pipeline application on Dec. 9 as well as the Jordan Cove liquefied natural gas export terminal project which would have processed the material, in Coos Bay, Ore. The commission previously rejected the project in March.
The combined projects would include a 232-mile-long, 36-in. natural gas pipeline to transport natural gas from Malin, Ore. to the Jordan Cove terminal. The terminal would sit on 400 acres within the International Port of Coos Bay on the North Spit of Lower Coos Bay. It would have a storage capacity of 320,000 cu meters and a liquefaction capacity of 6 million metric tons per year.
FERC denied the project application in part because the project stakeholder’s failed to show that the project’s benefits to the public outweigh expected adverse effects, according to FERC’s published decision.
Jordan Cove LNG has plans to refile its application with some modification. It plans to remove a 420-megawatt power plant from the proposal. The 2015 environmental impact statement for the project will remain valid, according to a company press release.
“Through feedback from stakeholders and extensive engineering work, we have designed a more efficient facility that does not require a power plant, and will reduce overall environmental impacts,” says Jordan Cove LNG CEO Betsy Spomer.
Light Rail Construction to Begin in Bel-Red
Sound Transit has announced construction will begin in the second quarter of 2017 on the Bel-Red section of the East Link light rail extension near the Bel-Red/130th Street station. The construction on this section will take approximately 42 months, with the East Link set to open in 2023, according to SoundTransit.
The section will connect Bel-Red to Redmond, downtown and south Bellevue, and Seattle.
Construction will include the creation of light rail tracks, widening of some roadways, installation of pedestrian and bicycle lanes, relocation of utilities and the restoration of roadways on either side of the light rail.
SoundTransit, the Central Puget Sound Regional Transit Authority, is currently looking for a contractor for the Bel-Red/130th Street station project.
Washington Governor’s Budget Allocates for Capital Projects
Washington State Gov. Jay Inslee released his 2017-2019 operating budget proposal and capital and transportation budget in December, and the budgets allocate a significant amount of money towards capital projects.
Inslee’s budget allocates $120 million to “combat homelessness.” A portion of those funds will go towards the construction of 1,700 affordable housing units and the preservation of existing units, according to a release from the governor’s office.
The budget also provides for an investment of $1 billion in school construction.
The capital and transportation budget, “largely supports the projects approved by legislators in the historic 2015 transportation investment package and adds funds to reduce traffic on Interstate 405 and build capacity on Interstate 5 in Seattle and State Route 167 in Puyallup,” according to the release.
Gensler Designs Hoffman’s Think Tank 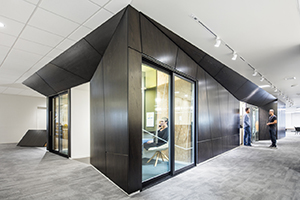 Portland-based Hoffman Construction hired the Seattle office of Gensler to design its “Think Tank” room, the central hub of the Hoffman office. Hoffman hired Gensler in order to create a space with form driven by function and digital integration, according to the design and architecture firm.
The project not only created a space to highlight Hoffman’s digital capabilities but also encompassed the company’s technological capacity. The design team designed the room in four weeks and Hoffman built it out in just seven weeks, utilizing digital scanning, design tools and SketchUp, Revit, Faro, Navisworks, Cyclone, ACAD and CNC.
ASCE Publishes Update to Design of Marine Facilities
ASCE Press recently released John Gaythwaite’s Design of Marine Facilities, Third Edition. The reference materials is a critical tool for civil engineers that design ports, harbors, and marine terminals.
The new edition includes added material on seismic design, tsunami effects, sea level rise, design of fixed aids to navigation in addition to new information on rehabilitation, maintenance, and repair of marine facilities, as well as facility inspection, assessment, and life-cycle asset management.