Jay-Reese has worked on other Austin projects including the Capital Metro Downtown Station, Pfluger Bridge and Lady Bird Lake boardwalk trail. Work is scheduled to begin this year, and the local government corporation is targeting completion in 2025 or 2026.

The Waller Creek Local Government Corp. has dubbed the second phase “The Confluence.”  It would be the southernmost section of the park, where the creek meets the lake. Work on this phase is set to include reconstruction and stabilization of the creek channel, plus construction of bridges and trails, installation of inline stormwater treatment devices, construction of a biofiltration pond and wildlife habitat areas plus installation of 200,000 mature plants and nearly 1,550 trees.

In addition to creating a park, the project is designed to improve water quality and the creek’s health, according to the Waller Creek Local Government Corp. Rodney Gonzales, its president, said in a statement that “The Confluence will deliver upon the vision for a connected park system and creek restoration.”

The corporation was created to lead implementation of the project, from design through operation and maintenance, as part of a public-private partnership between the city of Austin and the Waterloo Greenway Conservancy.

Jesús Aguirre, CEO of the conservancy, said in a statement that the phase “is centered around nature and helping connect our community to many amazing historic and cultural downtown destinations.” Its location sits near the Austin Convention Center, Emma S. Barrientos Mexican American Cultural Center and Rainey Street Historic District. 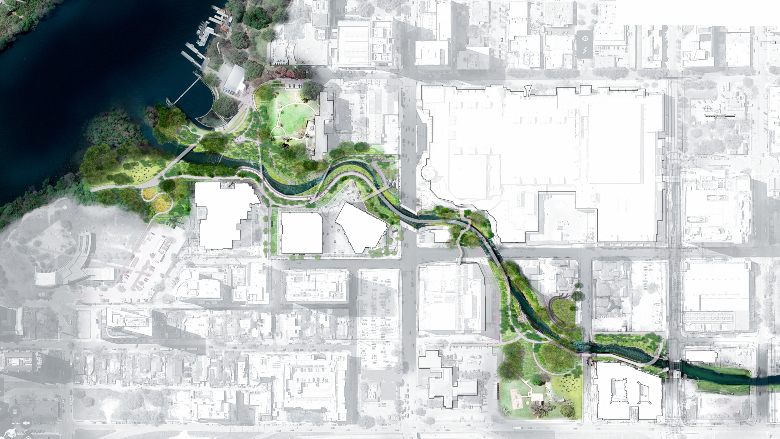 DPR Construction was the phase 1 contractor. That phase included construction of an amphitheater, plazas and a skywalk, as well as creek restoration. The final 15-acre phase 3 is currently in predesign planning, according to the conservancy.