Those working in construction are familiar with how constraints shape projects, but what about people parameters? Projects and people both succeed despite limits. Just ask Jerry Barnier, founder and chairman of Suntec Concrete.

“I’m not a great multitasker,” the 65-year-old confesses, but he says owning up to that attribute early in his career was “one of the best gifts I got.” Barnier says he realized “you need a team with you … people that could do something better than yourself.”

His ability to lead a team and develop individuals within it is considered by those who know Barnier as among his greatest strengths. The course Barnier blazed in growing the Phoenix-based firm from a small start-up in 1984 to one of the largest private employers in Arizona today impacted many along the way.

Barnier’s history and presence in the industry, along with other criteria such as community engagement and project prominence, are among the reasons ENR selected him to receive the 2023 ENR Southwest Legacy Award. 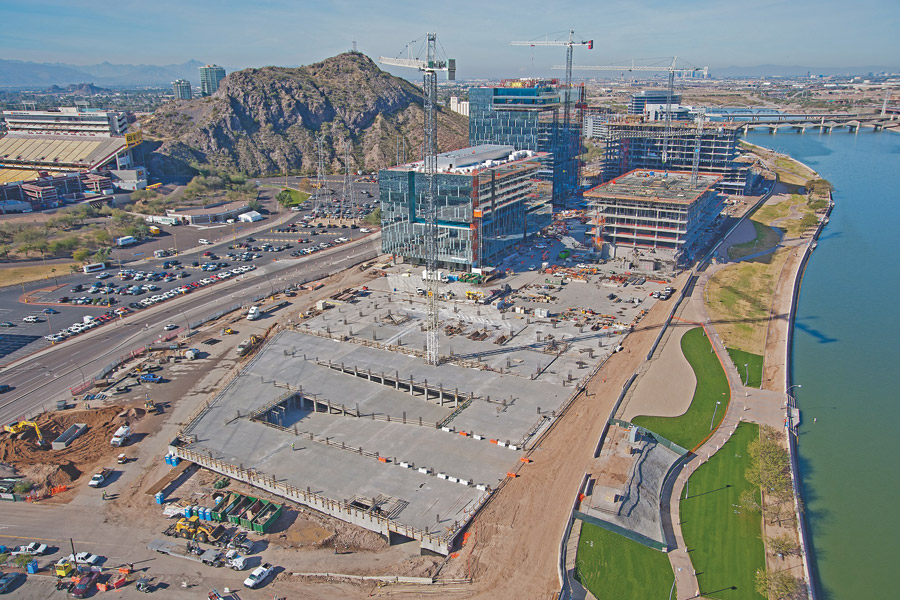 Growing up in rural Washington state, Barnier was drawn to construction while watching barns being built. After high school, Barnier skied Jackson Hole for a year and hitchhiked down the California Coast before landing in Arizona, where his sister lived, and eventually, he began his professional career as a carpenter. His progression to concrete began when his former employer Artcraft asked him to make a switch. “I really wasn’t thrilled about it,” Barnier says, “but they had some difficult projects.”

He hired some people “that knew what they were doing. I learned a lot from them,” he says. And, Barnier adds, the company’s risk tolerance level meant they’d “basically let me build anything that was making money.”

Then, in 1984, after the company took a financial hit, Barnier seized on an opportunity to buy the division from his employer. He started Suntec Concrete in 1984 with a team of 28 people. “I didn’t really set a lot of expectations. I know that sounds crazy,” Barnier says about the company’s early years. He says he was fortunate to find a trusting bonding company and within a few years began to build a résumé that included 20-story-tall high-rises. “I just took every opportunity and tried to really make the most of what was possible.”

Within a decade of opening the doors, Barnier learned another valuable lesson. The early ’90s economic downturn was “good for us to prepare for what the industry is,” he says, adding, “We learned a lot about how bad the cycles can be.” By this time the firm that started with 28 people went to 130 people and back down to 28 people again. As the economy began to recover, Barnier enacted a plan to ensure key team members stuck around. 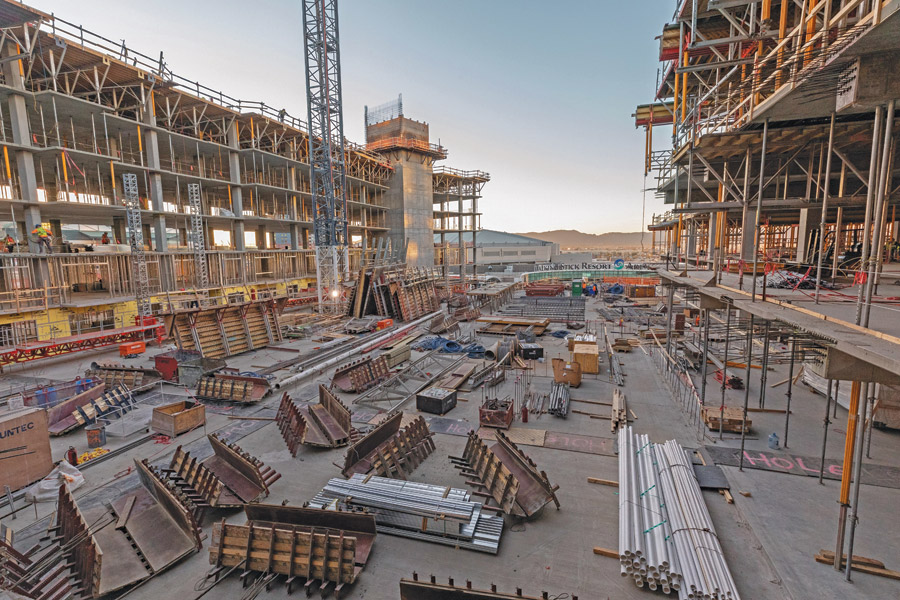 Eye on the Future

Julie Johnson, executive vice president at professional services and investment manager Colliers, is Barnier’s wife. They met nearly two decades ago through industry connections. Admittedly his “biggest fan,” she says it was important for Barnier to offer his team a chance at ownership.

“The thing that motivates him beyond just putting ‘art in the air,’ as he calls building these concrete structures, is growing people and seeing them grow and become better people” and that fact has an exponential positive effect within those people’s circles, Johnson says.

“I just took every opportunity and tried to really make the most of what was possible. ”
—Jerry Barnier, Founder and Chairman, Suntec Concrete

He’s the “cultural icon of the company,” says Derek Wright, who succeeded Barnier as Suntec’s president and chief executive in 2014. Wright was one of an initial group of three—also including David Chavez and Paul Sierpina—that Barnier invited to join as partners in 1996. Under Wright’s stewardship, the firm has expanded its leadership team and owner stakeholder group to 21 shareholders, including those that climbed up through the ranks.

“Letting people make mistakes to learn from them, and being willing to let people take risks and make mistakes has allowed tremendous growth in leaders,” says Wright. 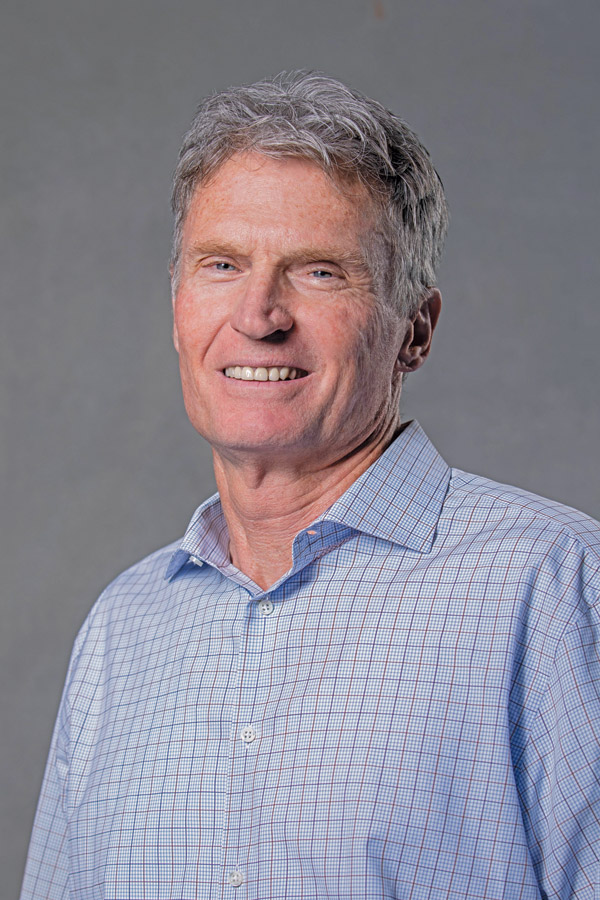 Despite leading his own company, “Jerry has his work boots on every day and is on jobsites in the morning, and at a 4 a.m. meeting at the yard twice a week, and I mean, that’s who Jerry is,” says Derek Wright, Suntec Concrete’s current president and chief executive.
Photo courtesy Suntec Concrete

‘Putting Art in the Air’

As the firm’s founder, Barnier has no doubt worn many hats as the company grew. His primary focus these days is on the firm’s structural operations, particularly large vertical cast-in-place projects. They’re among his favorites.

“I have a huge attraction to any big structure work,” Barnier says. “Whether it’s a convention center, the SkyTrain or a high-rise, I just have a passion for the whole complexity of it, and it still keeps me excited.”

Wright says, “Jerry has his work boots on every day and is on jobsites in the morning, and at a 4 a.m. meeting at the yard twice a week, and I mean, that’s who Jerry is.” He adds, “It’s that top down, principal-level involvement that our clients have come to know and expect that builds an incredible amount of trust and confidence.”

Among the higher-profile projects on Barnier’s and Suntec’s resume are Lucid Motors, which recently opened the first greenfield dedicated EV factory in North America in Casa Grande, Ariz. Others include the Skytrain at Sky Harbor International Airport, the entire campus of Grand Canyon University, Arizona State University Stadium and the Phoenix Convention Center.

With Barnier’s leadership and projects like these, it’s no surprise the firm has grown to more than 1,800 tradespeople with annual revenue nearing $800 million. The firm also boasts an 88% minority employment rate and 66% of its shareholders are minorities. It landed at No. 1 on ENR Southwest’s Top Specialty Contractors list in 2022. Its staff includes 600-plus apprentices and more than 40 journeymen. It’s also expanded operations to Utah and Colorado.

When Barnier’s not out on a 2 a.m. pour or exploring ways to build a project better, he still finds time to give back to the community. He puts much of his focus on opportunities that support teaching and learning, reflected in the company motto, “Teach. Train. Expect.”

“Our industry still knows him as the guy that’s on the floor in the middle of the night,” says Wright. “He is a passionate, driven tradesman at heart. And it’s very endearing to the people that have been our clients for decades.”

Barnier says the firm’s future is bright, crediting the people within. “They’ve just been a huge, huge part of [it] and that’s really what my goal’s been, building a group of people that really can take something somewhere,” And he says he’ll stick around until the leadership says “I’m ‘slowing them down.’ It’s still a lot of fun to be a part of this group that loves the challenges and opportunities.”