British Columbia officials have opened bidding for the last of three contracts on a planned 10-mile extension of the Vancouver SkyTrain passenger rail system. The entire project is expected to cost about $3 billion.

The newly issued RFQ seeks potential contractors for track work, plus installation of power, telecommunications and automatic train control systems. Responses are due by Jan. 23.

British Columbia Ministry of Transportation and Infrastructure officials say they will shortlist up to three teams to submit proposals for the work.

The plan calls for the existing SkyTrain Expo Line to be extended east through the city of Surrey and into the Langley city center on an elevated track. Eight new stations will be built, along with three bus exchanges.

An RFQ for the second contract, which will cover construction of the new stations plus connected cycling and walking paths, was issued in October and remains open until Jan. 5.

The RFQ for the first contract, covering design and construction of the guideway and associated road and utility work, was issued in August and closed Nov. 1. Officials say they will shortlist up to three teams for those contracts, too.

By delivering the project through three contracts, province officials say they hope to enable more bidders to compete for the work.

Officials expect construction to start in 2024, with operation of the extended line in late 2028.

British Columbia plans to cover the equivalent of $1.8 billion for the extension project. The Canadian government would contribute $975 million, and local governments would cover the remaining share. 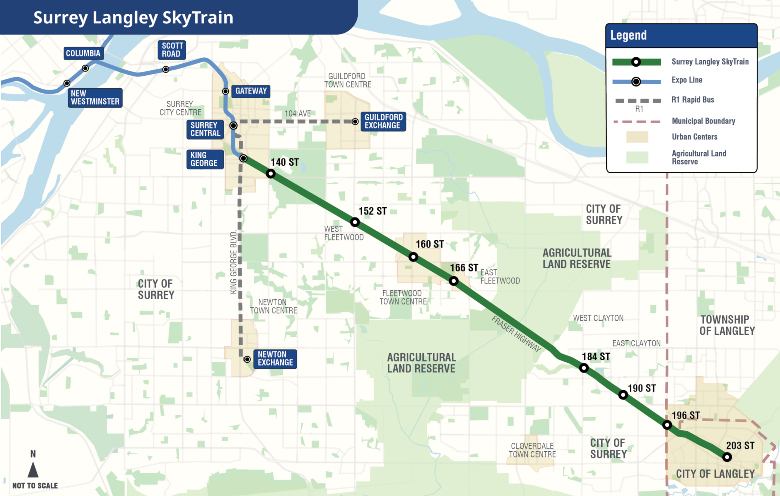 Map courtesy of British Columbia Ministry of Transportation and Infrastructure

The infrastructure investment will incentivize the use of public transportation over cars and make communities more livable, said Bowinn Ma, British Columbia minister of state for infrastructure, in a statement ahead of the RFQs.

This would be the SkyTrain’s first project south of the Fraser River in 30 years. Province transportation officials say it is needed to address the fast-growing population of Surrey and Langley. The Expo Line, named after the World’s Fair Expo 86 held in Vancouver, is the original SkyTrain line and was built ahead of the event. The system was later expanded with two other lines. Operator Translink says the system would include more than 60 miles of track following the Surrey Langley extension.

A 3.5-mile extension of the SkyTrain Millennium Line is also under construction. The project includes boring 3.1 miles of tunnel and building six underground stations at an expected cost of $2.1 billion. It is scheduled to open in 2025.