Just six weeks after Hurricane Ian struck Florida, Nicole made landfall south of Vero Beach at around 3 am on Nov. 10 as a minimal Category 1 hurricane. Nevertheless, the storm's 75-mile-per-hour winds and flooding delivered a second strong punch to Florida's still-recovering east coast, undermining homes and multi-story buildings and collapsing other structures and a section of A1A.

The National Oceanic and Atmospheric Administration's tidal gauge at Port Canaveral reported a six-foot storm surge about the time Nicole made landfall.

On Nov. 10, Volusia County announced that it had declared 49 coastal buildings to be unsafe.

The day prior to Nicole's landfall, Wed., Nov. 9, Sheriff Michael Chitwood reported that “dozens and dozens of buildings have been declared structurally unsafe in Volusia County.” 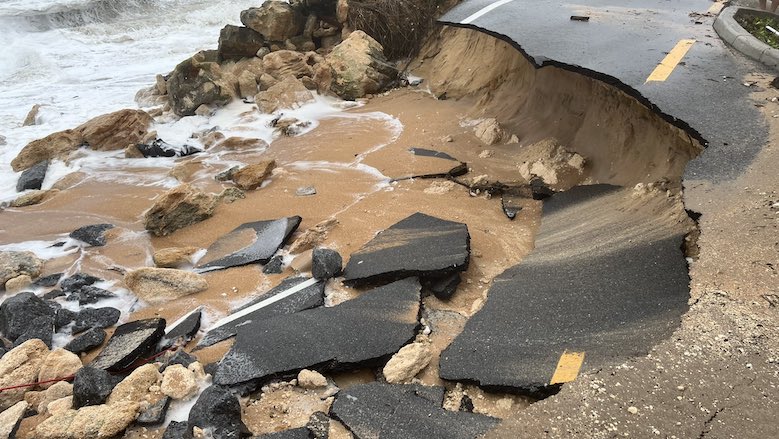 High tides and coastal erosion are a big concern, according to Kevin Captain, Volusia County spokesperson. Captain told ENR that county officials deemed 22 single-family homes unsafe Wednesday night in the unincorporated area of Wilbur-by-the-Sea and all the homes had been evacuated.

He said the buildings deemed unsafe were “directly correlated to some of the coastal erosion that we've experienced.”

On Wednesday night, Volusia County officials asked residents of 11 high-rise oceanfront condominiums to evacuate in advance of the storm. Six buildings in Daytona Beach Shores were deemed at risk of structural collapse. Five others were previously evacuated due to the risk of collapse, according to a news release by Michael Fowler, Daytona Beach Shores Public Safety Dept. director.

On Thursday morning, after Nicole had passed through, the Volusia County Sheriff’s office deemed several coastal homes “structurally unsound,” with several having collapsed into the surf. The Sheriff’s office also tweeted that it was evacuating residents from an oceanside condominium due to “unsafe conditions and sea wall collapse.”

In Flagler County, just north of Volusia, the Sheriff's office tweeted: "Part of A1A is closed in Flagler Beach because the road is collapsing due to the waves from #TropicalStormNicole. This is just one of the reasons why we’re advising you to stay off the barrier island until the storm is gone."

Further south, the middle portion of a 900-ft-long fishing pier near Fort Lauderdale collapsed, and in Port Orange, just south of Daytona Beach, the city reported that the Cambridge Canal Seawall had been compromised.

"Forecasters with the National Weather Service and the National Hurricane Center believe South Carolina could experience periods of heavy rain, gusty winds, tornadoes and storm surge due to Tropical Storm Nicole, with the greatest impacts beginning Thursday and lasting into Friday,” the division said in a news release.