As kayakers test a recently constructed wave feature on New England’s first whitewater park in Franklin, N.H., the Winnipesaukee River at Mill City Park is spurring development in the previously economically depressed town even as the project's second phase is still being financed.

Located about 90 miles north of Boston in the Granite State’s smallest city, the park will eventually comprise 13 acres with three whitewater features, two for whitewater kayakers and boogie boarders and one for traditional board surfers, in addition to a slalom course, suitable for Olympic slalom training. An additional 21 acres of conservation land will be conserved nearby.

Punch list items for the park’s $2.1 million first phase of construction is expected to be completed mid-December. The project's $2.4 million second phase has been designed and permitted with fundraising ongoing to support construction.

The Northeast’s only whitewater park—and just the second park of its kind built east of the Mississippi River—is inspiring other New England mill towns to construct similar facilities in hopes of reviving economically depressed areas.

“They have always led to quality-of-life improvements: a dynamic river corridor where people surf on surfboards … or play in whitewater kayaks,” Parichand says of artificially constructed whitewater parks built in other areas of the country. “There was no place in New England where you could do that, not one. I really wanted to see if the sport I loved the most could turn around a town.” 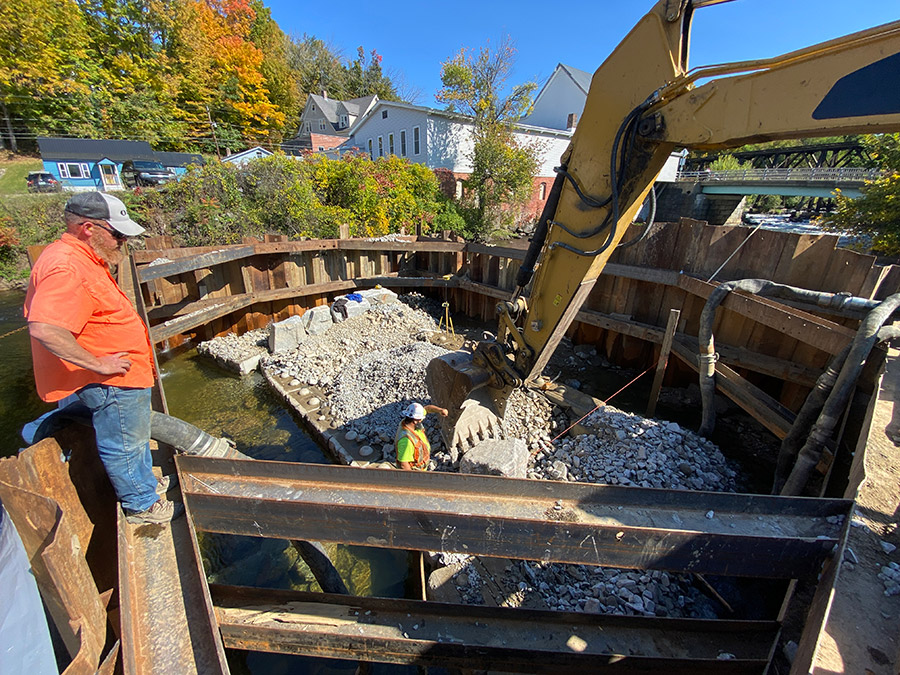 Build It and They Will Come

In 2015, Parichand, who says he has always been “super jealous” of the 35 whitewater parks in Colorado, developed the initial concept for the park in Franklin. He often showed photos of the Colorado parks to help those who couldn’t wrap their head around his idea.

“I don’t know how many millions of times I corrected people when they compared the whitewater park … to a Slip 'N Slide water park.”

Since Franklin began serious work on the park in 2018, it has in part spurred roughly $75 million in economic development in the town, including a $38 million, 170.000-sq-ft adaptive reuse mill project, which Chinburg Properties of Newmarket, N.H. is constructing near the Winnipesauke River,

Prior to the white-water park’s development, the former mill city town's real estate developments were worth $28 million and had only low-income housing.

The two remaining phase one punchlist items under construction by New Hampshire contractor Heart and Stone Landscaping include connecting the parking lot to the pedestrian walkway and installing wheelchair stalls, Parichand says. These were not part of the original project but were considered necessary for safety by the city and Mill City Park, he says. This will allow people to “park their wheelchair in the park without fear of it going down the [river’s edge] amphitheater,” he says.

The initial scope of the project’s first phase started by tearing down most of a 10-ft vertical concrete wall topped with chain link fencing along the river. The project team then built stone terracing and an ADA-accessible riverside trail, and an amphitheater at the whitewater feature, says Mason Lacey, engineer of record with the city of Franklin for the project and design engineer at Boulder-based Recreation Engineering & Planning (REP), which worked closely with project's general contractor, Alvin J. Coleman & Son Inc.

The design originally included a reinforced concrete wall at the upstream/downstream side of the wave feature as part of the foundation. But Coleman proposed using modular precast concrete blocks to create a foundation for the whitewater feature. The advantage of the modular precast concrete blocks is that they didn’t need to be fully dry before reinforced concrete slab was poured on top.

One design challenge involved a dam downstream that was controlling the tailwater of the whitewater feature the team built based on power needs. The dam operator can adjust the water level upstream, so the team installed a staff gauge at the dam that the dam operator manages, Lacey says. “We ended up constructing a rock riffle above the dam to help control the water level upstream of the dam for the whitewater feature.”

For these types of river projects, building a cofferdam, dewatering, and managing the river are major challenges, Lacey says. For the initial feature crews “had to build a sheet-pile cofferdam in the middle of the dam impoundment in the middle of the river and pump water out,” Lacey says. “They had a dewatered island hole in essentially a lake and had to bring everything in over the water, place it in the cofferdam and construct the feature,” he says.

While building the whitewater feature, the team dumped 300 cu yds of stone aggregate using a long reach excavator with a 70-ft-boom it had to source from a company in Florida, says Brian Bailey, A.J. Coleman project manager/estimator.

Schedule was also challenging since they originally planned to construct in July when the water level is generally low, Lacey says. But due to storms, “upstream reservoirs were really full and there were high flows into late fall,” he recalls. The team had to wait until flows dropped to mobilize and begin staging equipment and were unable to enter the water until late September. 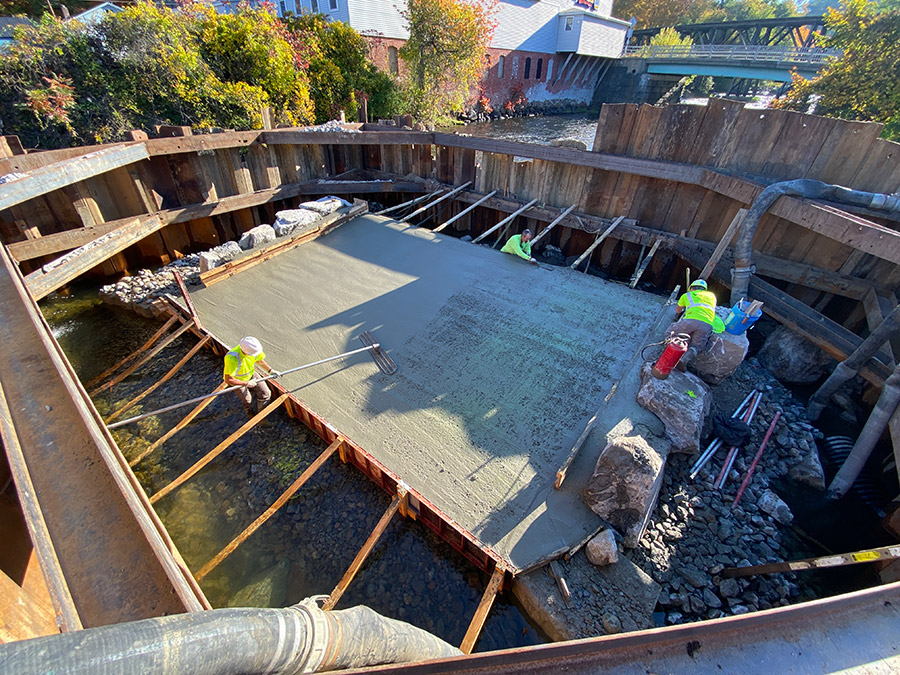 Smoothing concrete for the face of the whitewater feature
Courtesy of Spencer Lacy, REP

Judy Milner, Franklin’s city manager, says “permitting shoreland and water protection took a lot of effort … but everyone came to the table.”

VHB worked with REP on environmental and regulatory issues. Pete Walker, principal at VHB, says, “Reshaping the bed of a river to create a recreational resource had never been attempted before [in New England]. “The project had no rulebook, no set of criteria … it took the agencies time to permit it.”

The team submitted the permit application in August 2019 and final permits were issued in May 2020. The U.S. Army Corps of Engineers authorized the project using a statewide general permit, which streamlines the review compared to using an individual permit, Walker says.

Due to Franklin’s long history of industrial use, the river was modified in the 19th and 20th centuries with a series of dams on the Winnipesaukee River. “We knew there was manmade debris in the bed of the river,” Walker says.

The proposal included environmental cleanup from previous use and working with river structures based on natural river features. Since the project involved placing new structures in the riverbed, the team “felt strongly” it would need to mitigate to alleviate any environmental impact.

The team partnered with the Lakes Region Conservation Trust, a Center Harbor, N.H. nonprofit, to place about 20 acres of land along the river into conservation easement, providing “a permanent buffer to the river,” Walker says.

“The success we have had in Franklin has helped provide a model for Skowhegan, Maine,” says VHB’s Walker. 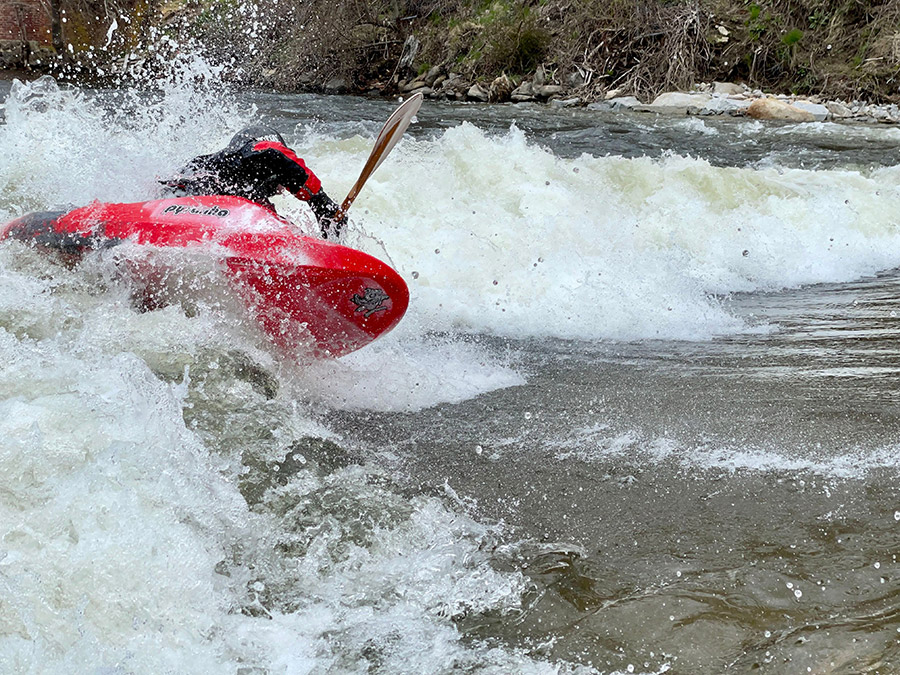 The nonprofit Main Street Skowhegan in Skowhegan, Maine, is partnering with the town of Skowhegan in planning for its own river park. Kristina Cannon, the organization’s executive director, says Franklin's "Mill City Park is a great proof of concept.”

McLaughlin Whitewater Design Group of Denver, Colo. completed preliminary design for the Skowhegan River Park in 2014 and is awaiting feedback from federal agencies before going into final design. The town has raised nearly $7 million in the last seven months in federal funding. This includes $2 million through the Dept. of Housing & Urban Development for riverfront development which will include a promenade, viewing areas, and river access stairs on the North shore and nearly $5 million awarded as an ARPA Travel, Tourism, and Outdoor Recreation Grant through the Economic Development Administration for in-river construction of two whitewater rapid features.

“We’re gearing up to go to bid in the next couple of months,” says Cannon, who notes that the contractor will be involved with final design.