As New England communities face more frequent and intensifying storms, several combined sewer overflow (CSO) projects across the region are moving into the construction phase, and one has passed a major milestone.

CSO systems handle untreated or partially treated human and industrial waste, toxic material, debris and stormwater, according to the Environmental Protection Agency, and are subject to Clean Water Act regulation. With concerns about protecting community health and the environment in the wake of these storms, here's a look at how some of these critical projects in the region are progressing: 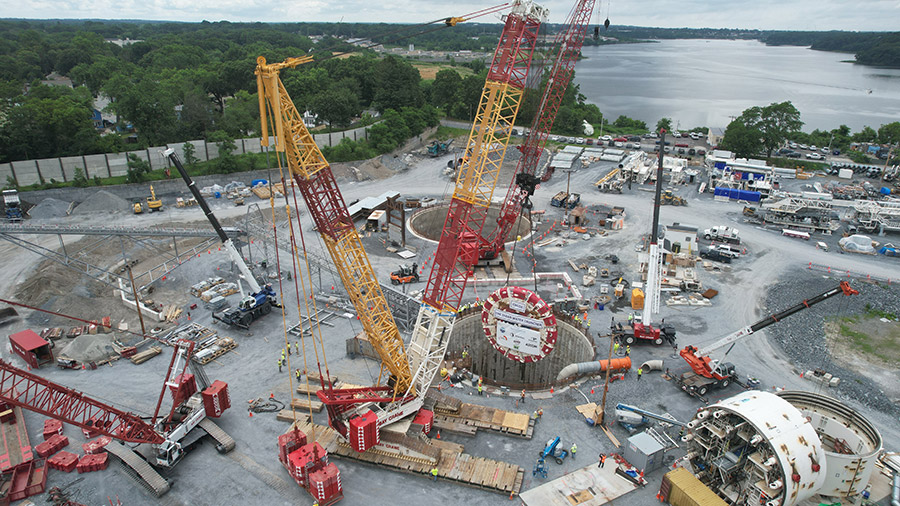 Aerial view of a 600-lb crawler crane lowering the TBM cutter head into the launch shaft at the main site in Pawtucket.Photo courtesy of Matt Thurber

A year since the boring of a massive tunnel near the Seekonk River in Pawtucket Rhode Island began, crews are currently sinking shafts, producing tunnel liner segments and assembling the tunnel boring machine (TBM) on site as part of the Narragansett Bay Commission CSO “Big Dig” project. At $1.5 billion, the largest single public works project in Rhode Island history is scheduled for completion by 2027.

Crews have mobilized six mobile cranes and a 600-ton crawler crane to assemble and lower the heavy sections of the TBM, says Stephane Polycarpe, engineering manager at CB3a joint venture, design-builder for the project. The crews are working 120-ft below ground in a 60-ft dia shaft, The heaviest pick weighs 750,000 lbs.

The TBM is set for completion by the end of August with tunnel mining scheduled to start in September and end September 2024, says Melissa Carter, vice president at Stantec, which has been involved in the project since 2014.

The work involves constructing the 2.2-mile long, 30-ft dia tunnel beneath the cities of Pawtucket and Central Falls, R.I. At depth ranges of 115-ft to 160-ft below grade, the tunnel is designed to store a minimum of 58.5 million gallons of combined sewer overflow.

Currently underway, Phase III—which started 18 months after the award of the contract to the joint venture of CBNA-Barletta in December 2020—includes “construction of the Pawtucket Tunnel, a deep rock tunnel in the Rhode Island formation with four connections to the main sewers on both banks of the Black Stone River,” Polycarpe says.

Crews are reconfiguring the main site to accommodate the TBM excavation expected to progress at an average rate of 40 ft to 50 ft per day, Polycarpe says. The TBM will excavate and line the tunnel with precast concrete segments manufactured by the JV at a facility it built in Cranston, R.I. The precast yard is producing 56 precast concrete segments, each weighing 15,500-lb, daily for TBM installation to form the final lining of the tunnel, Polycarpe says. To ensure watertightness of the completed tunnel, all segments are fitted with compressible gaskets, he says. A full ring comprises seven segments which line 6.7 ft of final tunnel.

“In the cities of Pawtucket and Central Falls, all five sites are open with work progressing on schedule,” Polycarpe says.

The excavation lateral support systems are complete for all shafts. Drilling of the drop shafts and vent shafts ranging between 8 ft dia to 2 ft dia. to 90 ft deep is currently underway. The proximity of existing buildings and utilities at two Pawtucket sites where blasting operations were transferred from the main site requires “even finer control of the effect of the explosions,” Polycarpe says.

The first blast tests occurred in late June and "no adverse effects were recorded,” Polycarpe added.

In related Phase III work, Narraganset Bay Commission CSO work, excavation is underway for a $4.7 million green stormwater infrastructure project at Pierce Park in Central Falls to refurbish a baseball field and build a new basketball court, says Brandon Blanchard, managing engineer for the Pare Corp. The project that began in June and is set to end by November, is the third green stormwater project in Central Falls designed by the Sandwich, Mass.-based Horsely Witten Group.” “They’ll be constructing it with plastic infiltration chambers, bedding stone and sand,” says Blanchard. 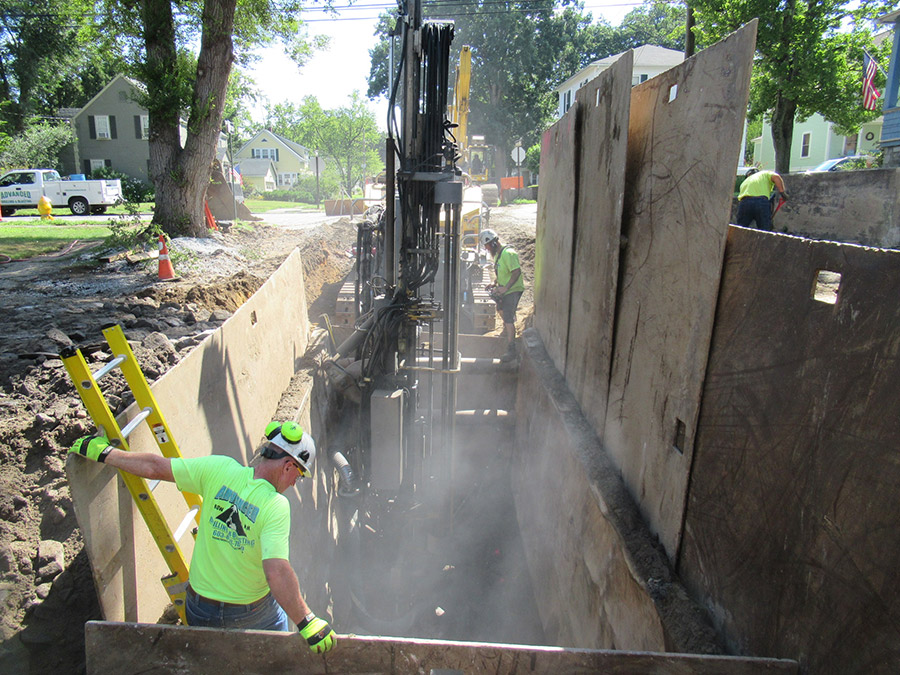 Drilling to set explosives inside trench box to blast granite ledge on Christian Brook main drain project.Courtesy of the City of Manchester Department of Public Works

Since the Phase II consent decree was finalized on Sept. 28, 2020, four open-cut projects have been combined into the singular $85 million Cemetery Brook Tunnel Project. AECOM is designing the two-mile-long, 12-ft-dia tunnel that will sink up to 80 ft deep.

As the city’s largest 4,500-acre drainage basin, Cemetery Brook contributes 70% of the city’s CSO discharges and 3.2 million gallons per day of dry weather flow to the wastewater treatment plant, according to a recent report on Manchester’s Ongoing CSO Mitigation Program. Final design is set for completion by November 2023, with construction scheduled to begin in fall 2024.

“This was the most cost effective and minimized disruption to our community businesses and sister utilities,” without “replacing every single utility” on Queen City Ave., a heavily traveled thoroughfare into the city, says Fred McNeill, chief engineer for the Manchester Dept. of Public Works Environmental Protection Division.

The tunnel will follow beneath Queen City Avenue for 25% of the tunnel length before running under an abandoned railroad bed for which the city received an easement, says McNeill.

To assist with making connections, the team is designing wide diameter drop shafts to allow water into the pipe and correspondingly let air out of the pipe, McNeill explains. “They’re going to be big and require a significant footprint for construction and future ownership and operation."

Meanwhile, the $15 million Christian Brook main drain construction, the city’s first phase II CSO construction project, began on April 1 for separation of the 25-acre drainage basin. Completion is tentatively set for May 2024 and will be followed by a $31 million lateral pipe construction project from 2024 to 2026. 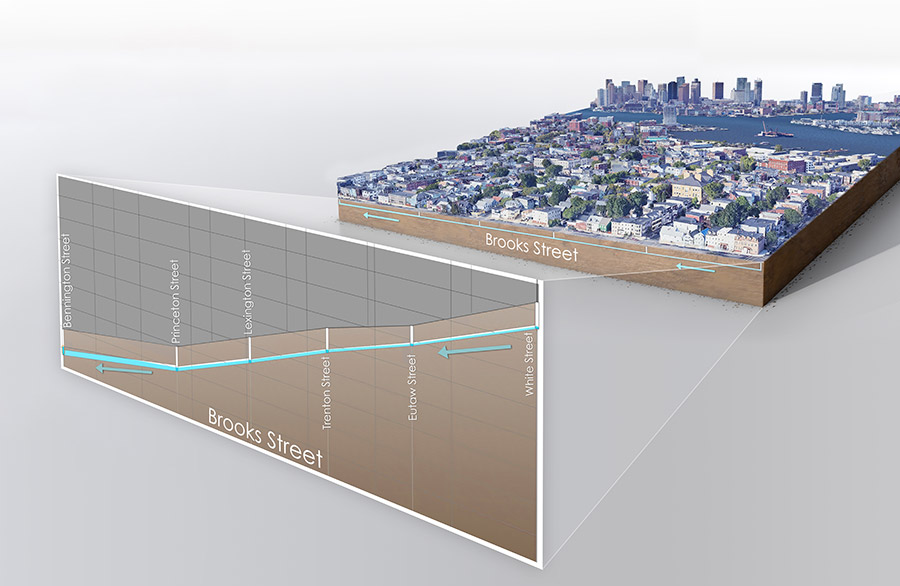 Stantec is using the BWSC’s PCSWMM computer model to design and evaluate performance of a new storm drain collection system to serve a 200-acre service are in East Boston.Courtesy of Stantec

In late June, Stantec was chosen as lead designer for the $150 million East Boston Sewer Separation project as part of a 30-year program to reduce pollution in Boston Harbor and modernize the area’s water infrastructure.

Stantec is designing the proposed new storm drain collection system for 230-acres in East Boston using the commission’s PCSWIMM (Soil and Water Integrated Model) hydrologic/ hydraulic (HH) model of its sewer and storm drain in combined sewer collection systems, says Mike Carroll, senior principal and project lead on the Boston Water and Sewer Commission (BWSC) work. “When you get stormwater runoff that gets into the system and exceeds its capacity, it can overflow to a receiving water, in this case into Chelsea Creek and Boston Harbor,” he says.

Preliminary design began in late February and will extend until spring 2023, he says. Final design will involve five separate construction contracts with one package executed every 12 months. The project is estimated to finish by 2031.

The team is designing the new storm drain collection system for a 10-year return period storm for current sea level high tide. For future assessments, BWSC will use data from either a 2050 or 2070 time horizon. “Our final decision will come within two months,” says John Sullivan, chief engineer for the BWSC.

Near the coast it is not possible to gravity-drain into the sea during an intense rainstorm when the sea level exceeds our design level of 13 ft. based on Boston city-wide elevation datum, Stantec's Carroll says. “We expect the sea level to increase by 1.5 ft by 2050 and perhaps as high as 4.5 ft by 2070.”

Meanwhile, in South Boston, a $143.2 million, 402-acres separation project is 30% complete. Stantec is the designer with Dedham, Mass.-based Fed Corp serving as the general contractor for the first in a series of five CSO contracts.