To turn an underutilized block next to Chicago’s busiest commuter hub into a landmark 52-story building, the design and construction team had to dig deep for creative solutions. While excavating the project, crews had to contend with both an abandoned trolley tunnel and an active brick sewer—both of which were more than 100 years old.

The team had to coordinate removal of the trolley tunnel, which used to pass under the Chicago River and surface above the project site. The demolition contractor was able to remove sections of the old tunnel while the caisson driller followed closely behind, keeping the foundation construction on schedule.

Removing the active sewer line running through the middle of the project site proved even more challenging. When the city’s process for obtaining easements for the sewer removal ran behind schedule, the team devised a solution so it could maintain progress on the project. After securing the sewer’s original blueprints from the city, the team installed sheeting around the sewer, poured the mat foundation around it and erected the core wall above it. With the easement eventually secured, the sewer line was then demolished, including removal of its brick and dirty water. Finally, the team tied into the new sewer line that ran around the perimeter of the site. 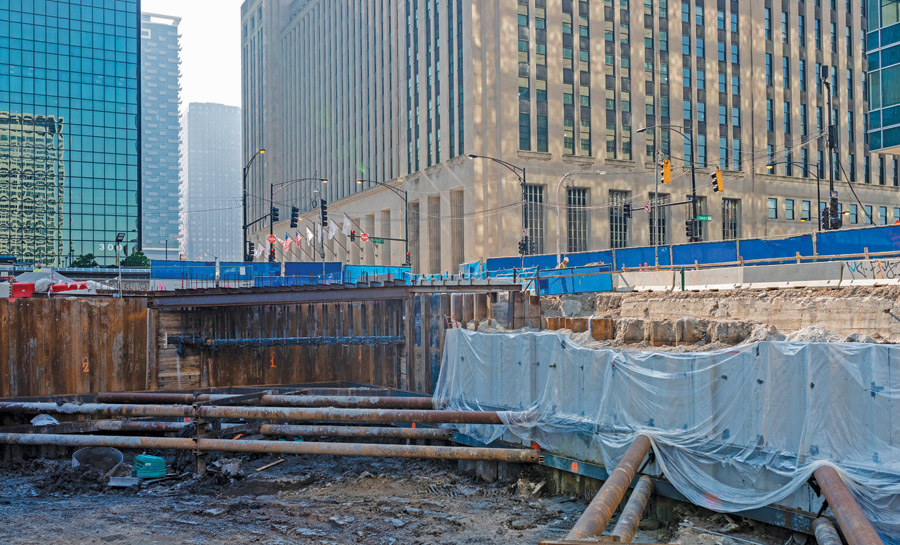 Despite the underground obstacles, Clark delivered the first through 33rd floors in July 2021, two and a half months ahead of the original schedule. Ultimately, the project reached substantial completion a full two weeks early in April 2022.

Lant Fogarty, senior project manager at Clark Construction, credits the team’s collective experience on other projects for the success. Prior to the 320 S. Canal-Union Station project, Clark worked with the developer, Riverside Investment and Development, and the architect, Goettsch Partners, on the 110 N Wacker and 150 North Riverside projects in Chicago.

“We really hit our stride on this project,” he says.