Balancing the desire for an iconic bridge with the need to maintain a tight budget, T.Y. Lin International designed a curved bridge that spans the Fox River in the heart of downtown Aurora, Ill. The 752-ft-long bridge features a central reinforced concrete box beam from which two pathways cantilever on either side—one for cyclists and one for pedestrians—providing a much-needed connection to the Aurora Transportation Center.

“This is a great example of creating a signature project while really dialing in the budget,” says Bobby Sokolowski, senior bridge engineer at T.Y. Lin International.

To stage and construct the new bridge, construction crews had to span over navigable waters and comply with regulations and requirements from the Illinois Dept. of Natural Resources and the Army Corps of Engineers. General contractor Judlau built the bridge in two stages, utilizing temporary access causeways that consisted of 46 temporary pipe culverts. The culverts were installed to mitigate the risk of upstream flooding.

For the cast-in-place concrete structure, crews used a falsework support system with a multitiered formwork system that could be adjusted for the bridge’s vertical and horizontal curves. This allowed for the pedestrian bridge to be poured in the required sequence. 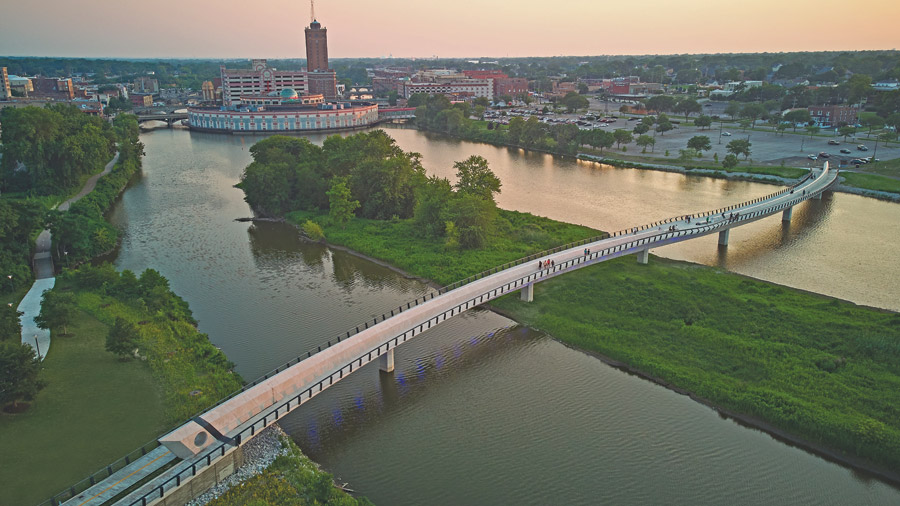 From the riverbanks, the pathway decks gradually rise to the top of the girder at the midspan, where overlooks and benches offer views of the Fox River and downtown Aurora. This modern design provided the community with the iconic structure they requested while also respecting the project’s budget.

The completed bridge features lighting systems that can be controlled both simultaneously and independently. The center bridge lighting system consisted of color-changing LED ribbon lights installed inside an architectural cornice. Color-changing under-bridge lighting was installed and directed at the lower box girder. Both systems came from different manufacturers but required the use of a single compatible lighting controller. In addition to providing aesthetics, the color-changing LED system also honors Aurora’s moniker, City of Lights.