Described by renowned architect Sir David Adjaye as a ”21st century prototype of a multi-purpose knowledge campus in the public realm,” the 55,000-sq-ft Winter Park Library and Events Center features multiple interactive areas, 120-seat performance and education space and grand ballroom that can seat 250 people at tables or 316 theater-style.

With walls that lean out making the buildings larger at the top, Brasfield & Gorrie says the biggest test of its expertise was coordinating connection points from the precast concrete to the steel structure on buildings which overlapped each other in the center.

The contractor met with Gate Precast Co. multiple times about logistics, including the sequence in which the buildings would be constructed, as the three separate structures on the site had to be built in a continuous flow, in the correct order, to maintain access for installing the overlapping panels. 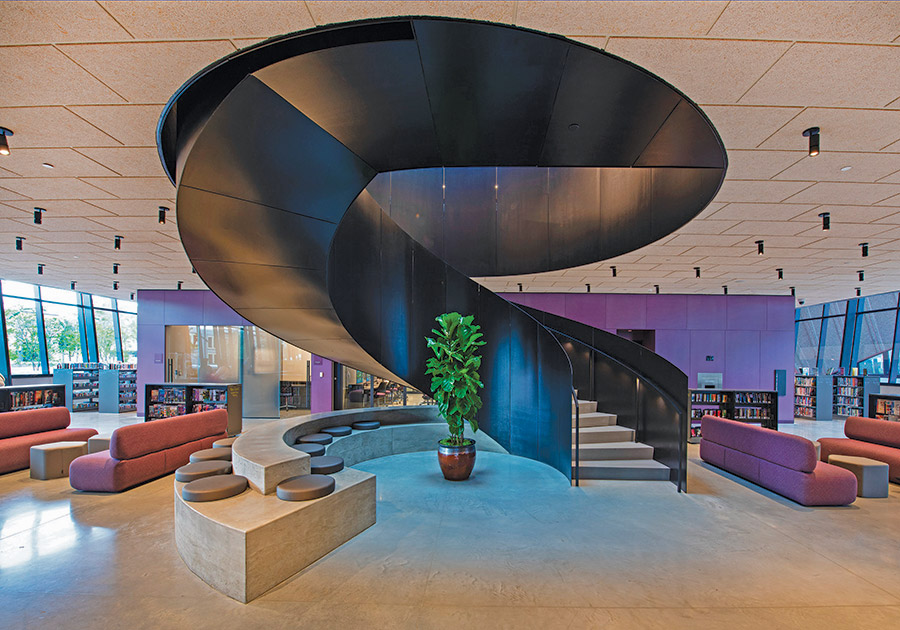 “This was conceived as a micro-village of three pavilions, each of different scale and function but which share a common formal language,” Adjaye says in the application. “The village is comprised of a new two-story library, an event center with rooftop terrace, and a new welcome portico that ushers users from the street and unifies the three structures.”

The buildings, he says, follow the principles of biophilic designs, all on the raised belvedere with generous, unobstructed lake views and designed to reference Florida’s flora reacting to its environment. Adjaye and his team generated the forms, patterns and design using old postcards, newspapers, historical archives and interviews to make sure the new campus fits in with the context of Winter Park. Locally sourced materials, energy production via solar panels and a stormwater irrigation system form the core of the sustainability-led design, including Brasfield & Gorrie’s installation of a stormwater irrigation system centralized under the permeable parking lot structure. That irrigation system will allow water to make its way through the porous parking volume to a subbase of granite and eventually cumulating in Lake Mendsen, where it will be reused to water the campus’s landscape.

Adjaye says it’s been humbling to work alongside the city and the many local champions of the project, and that as a centerpiece of the revitalized Martin Luther King, Jr. Park, it’s designed as a robust space for community gathering, edification and empowerment.

Back to ENR Southeast Best Projects 2022