ENR Southeast Project of the Year: Builders Rise Up Over Sky-High Logistic Hurdles

For design-builders HNTB Corp. and Hensel Phelps to successfully deliver Tampa International Airport’s $326-million Blue Express Curbsides project—a first-of-its-kind facility for the U.S.—engineers and contractors would need to weave their work over, under, through and around buildings and other infrastructure comprising the tight, jam-packed jobsite located at TIA’s southern front door.

Add as that construction was ramping up in early 2020, right around the onset of COVID-19, the potential obstacles to success were waiting at every turn. With the pandemic soon in full swing, for instance, Hensel Phelps quickly had to find a way to safely transport more than 800 craftworkers to the site each day, which ultimately required a detailed transportation schedule.

The challenges were only beginning.

“We describe this project as almost like doing open-heart surgery,” says Dan Seeley, Tampa International’s senior manager of construction. “We’re building a building that’s under a building between two buildings and surrounded by cars.” 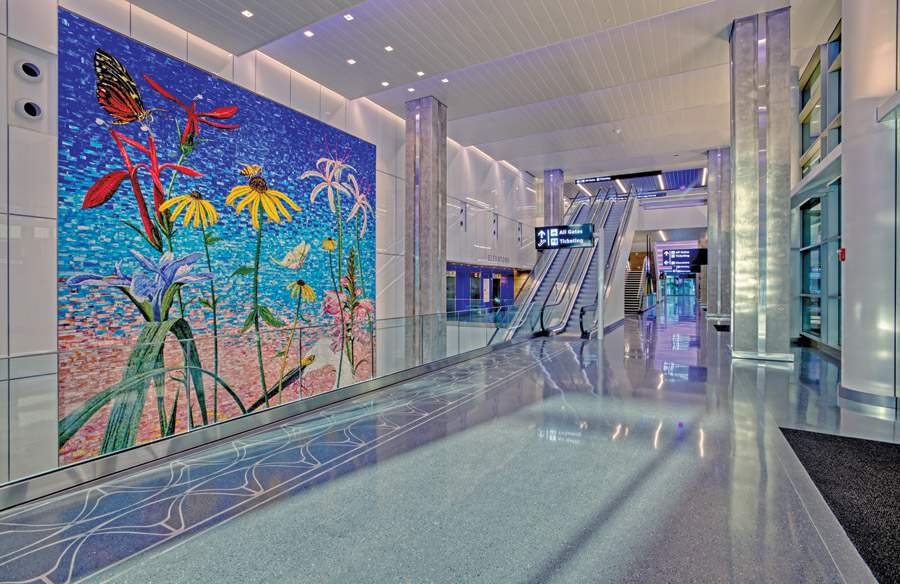 And the project included much more than just constructing a single building.

Despite its name, the Blue Express Curbside project required a host of other tasks in support of creating new ways of departing from and arriving at Tampa International Airport. Contractors needed to relocate underground utilities to make way for the work, which also included demolishing an existing administration building and constructing a new 10,000-sq-ft central utility plant and a new pedestrian bridge from the long-term parking garage to the main terminal, all without affecting passenger flow, according to HNTB.

Some of the work, such as the splicing and merging of new and existing roadways and construction of elevated bridges over roadways, was performed at night to minimize the impact on passengers. 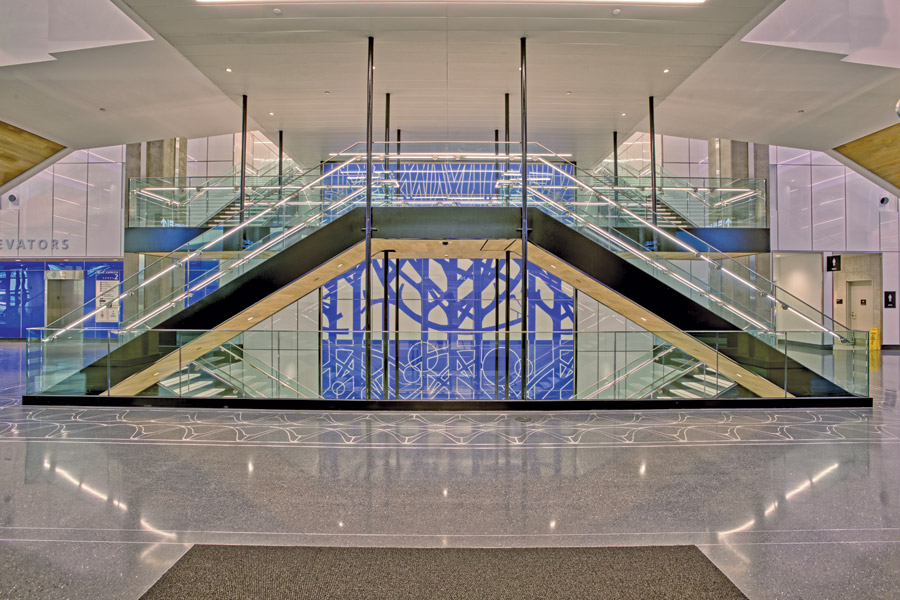 The goal of the Blue Express project, says Seeley, “was basically to take the pressure off of our existing curbsides, which are already at capacity.”

With a projected doubling of passenger traffic over the next 10 years, from the present volume of 17 million travelers up to an estimated 34 million, the need was urgent.

HNTB, hired by the Hillsborough County Aviation Authority in 2011 to update TIA’s master plan, saw the data, which “made it clear Tampa International needed more curbside length and lanes to handle current and future peak hour demand,” according to the company’s website.

Finding that an estimated 53% of airport passengers don’t check bags, HNTB and TIA identified a solution for decongesting the main entrance and improving overall capacity—constructing curbsides dedicated to those travelers.

But how to do that? 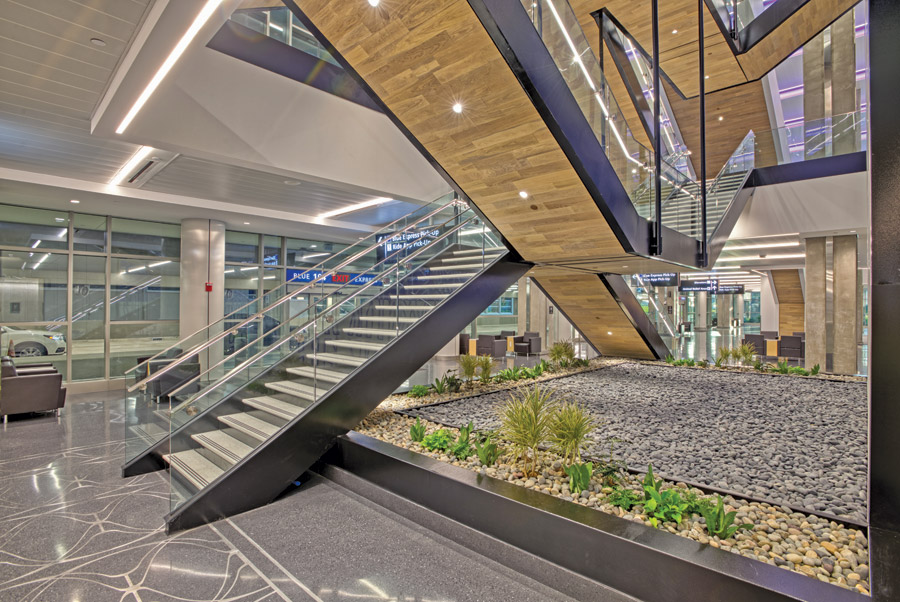 A main factor influencing all of the project’s logistical gyrations is Tampa International’s modest footprint and relatively compact and efficient layout. For instance, TIA’s acreage totals about 3,300 acres, while, by comparison, Orlando International Airport spreads out across more than 13,000 acres.

And the airport, which in September 2022 was named the nation’s No. 1 Large Airport for customer satisfaction by J.D. Power & Associates, wanted to keep its customers pleased with the experience of flying from TIA.

The airport’s layout, though—with its main terminal partially surrounded by four airsides positioned in a semi-circle, and with a main parking garage just across from its main south entrance—would require some imagination to expand its capacity while also “decongesting” its increasingly crowded curbsides.

“The biggest challenge that we had was how constrained the existing site is,” says Andres Chacon, HNTB’s aviation project manager. “There was no room for us to set a new building, so just creating a space where there was nothing before was probably the biggest challenge.”

However, Chacon adds, a related challenge was designing a “broadway” for drivers to make their way through the existing parking garage. That would require HNTB to “weave in this broadway through and around multiple existing columns,” he says.

For the Blue Express Curbside—which serves the terminal’s south side—HNTB’s design added four lanes for both arrivals and departures, for a total of eight. A follow-up project, the Red Express Curbside, will do the same on TIA’s north side, bringing the total number of new curbside lanes to 16.

Overall, HNTB says in the Best Projects entry: “The Express Curbsides were envisioned to allow passengers to get to and from their gates faster, bypassing the ticketing or bag claim levels, and improving the overall passenger experience.”

New dedicated ramps bring departing passengers with only carry-ons to their own dedicated curbsides, where they can take the elevator, escalator or stairs up one level, completely bypassing ticketing and baggage areas as they find their way to a shuttle and then make their way to their respective airside’s TSA security checkpoint. 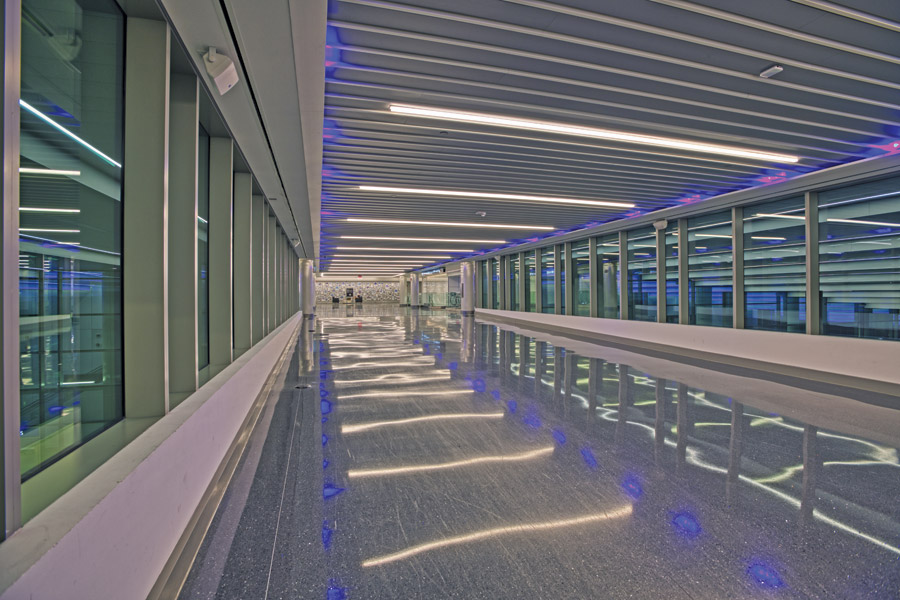 LED blue lighting was installed to create a wave effect meant to resemble the ocean.
Photo by Trey Cambern Photography, Courtesy of HNTB

Overcoming the project site’s numerous logistical issues, such as with constructing the vertical circulation building, was a main overarching hurdle.

“There were a lot of challenges we had to work through,” says Drew Krizman, program director for contractor Hensel Phelps.

“Just thinking about how to get in, how to get out, staging materials, the logistics of hoisting,” Krizman says, starting to rattle off a list of puzzles.

“How do we get the steel members up?” he continues, adding: “How do we install the roof underneath the existing ramp that’s literally 4 feet above us?” The list goes on.

The project team’s entry for this year’s Southeast Best Projects contest further details the logistic hurdles of constructing the vertical circulation building, noting that the work was done while working within a “diminutive space while maneuvering beneath pedestrian bridges, a parking garage overhanging the existing terminal building, existing tunnels and a people mover.”

Moreover, the design-build team determined that the vertical circulation building needed to be built in phases.

“We had to build the west side of the building first while keeping the passengers going through the existing bridges, and then come back once the new bridge was built and do the second phase,” Krizman says.

The contractor credits the close collaboration of the design-build team for the project’s success. 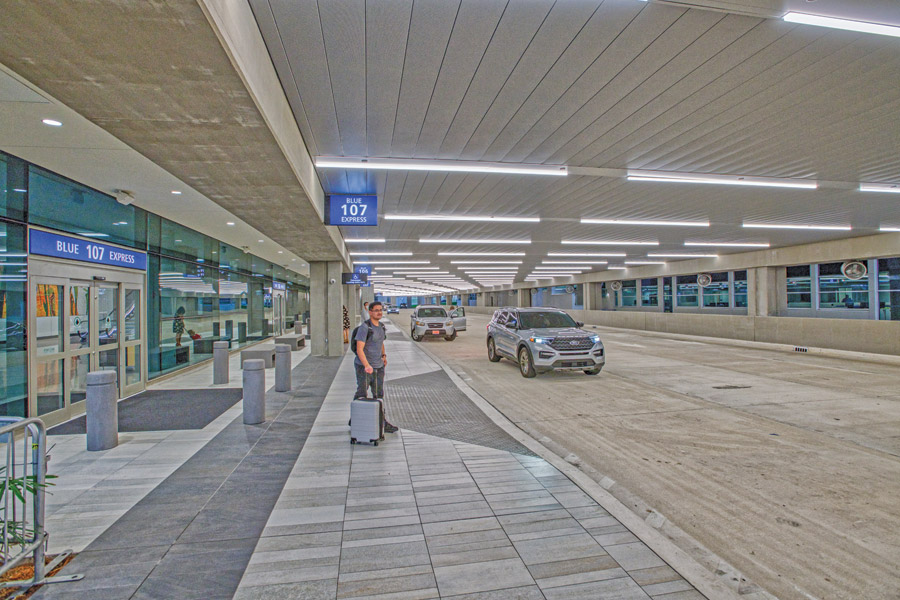 The Blue Express Curbside project provides a quicker way for passengers not checking bags to reach their gates.
Photo by Trey Cambern Photography, Courtesy of HNTB

“The phasing and logistics combined made this a really significant project, but the teamwork was amazing,” Krizman says. “We really enjoyed this project.”

HNTB’s Chacon credits the design-build team’s hand-in-hand interaction style, which enabled efficient decision-making when the situation called for it.

“It was essential for Hensel Phelps and us to come together in a way that we could make decisions quickly,” he says. “We had to make sure that we were on the right track together before we made the decisions that we then introduced to the client.”

In the end, the client, Tampa International Airport, more than appreciated the HNTB-Hensel Phelp’s decision-making that delivered the Blue Express Curbside.

Said Joe Lopano, the airport’s CEO: “This revolutionary project further cements our place as industry leaders, promoting smart growth that will translate into a positive economic impact for our region.”

ENR Southeast’s Best Projects judges concurred, noting not only the team’s ability to deal with “the logistics of separating the paying airport customers from the construction,” but also the project’s excellent safety record, as they honored the Tampa International Airport’s Blue Express Curbside project as the 2022 Southeast Project of the Year.

Back to ENR Southeast Best Projects 2022