Revitalizing south downtown in Albuquerque, the $52.2-million project included 286,000 sq ft of renovation to the eight-story tower at 415 Silver Ave. and construction of the adjacent 12,000-sq-ft Commission Chambers Building. Vacant for seven years and prone to littering, graffiti and crime, the two-block property is now a vibrant flagship for New Mexico.

Completed May 2021 on budget and on schedule via design-build delivery, the center has consolidated nearly all county departments and services, drawing an estimated 140,000 constituents and more than 800 employees downtown to a modern, welcoming and safe building. The chamber's addition, which replaced the old annex, defines a new entrance to the complex.

By integrating design and construction into a single contract, the project team ensured a collaborative approach to a variety of challenges, including refurbishing and upgrading the existing HVAC system with new coils, fans, motors and pumps.

With a “fast-track” approach, the design-build team produced three work packages—demolition, tower renovation, and building the commission chambers—which allowed demolition and renovations to begin before the design was finalized. 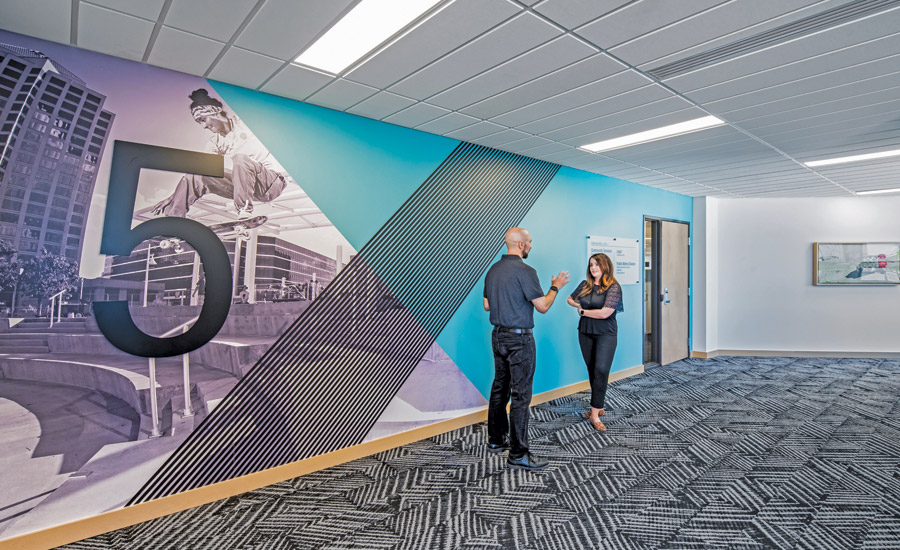 A limited contractor laydown yard on the southwest corner of Fifth Street and Silver Avenue challenged the team to erect an exterior trash chute to quickly remove debris. In turn, a temporary exterior elevator facilitated the movement of materials to each floor. The team also worked through COVID-19 challenges by continually disseminating isolation and cleanliness standards.

Renovating an existing property, rather than developing a new one, benefited the county and the taxpayers. Project costs were approximately $175 per sq ft, including demolition and construction and design, furniture and equipment. In contrast, new-built was an estimated $325 per sq ft.

As part of the tower renovation, the exterior received several updates, including new paint and a refinish of the entrance-facing cooling towers. These additions, as well as the complementary angular façade, harmonize the two buildings and reinforce campus continuity. Inside, the renovation added a new security system, self-service kiosks and an info desk at the entry. 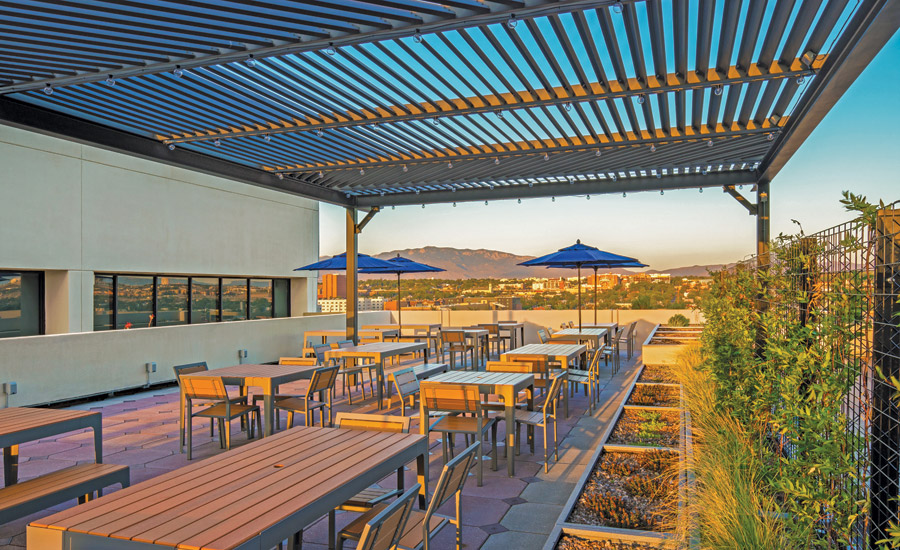 On upper levels, offices and meeting rooms are organized within the core wherever possible, maximizing staff’s access to daylight and views on the periphery. In addition, spaces that provide for employee well-being such as focus rooms, quiet rooms, and living room-style break areas were also included on each level. The entire space program was accommodated while allowing the majority of one level to be treated as shell space for expansion.

Also added were a clinic, gym, café, TV production studio, and removal of an unsafe pedestrian bridge across 4th Street. The installation of a rooftop patio required reinforcing the seventh-floor ceiling structure with steel joists.

During construction, the team constantly updated the BIM model as new information was discovered or changes in design, systems design and routing were made. This facilitated a streamlined coordination and decision-making process. The BIM model was also used to demonstrate what owner-requested changes would entail and helped relate design intent and justify cost.

By pursuing a Fitwel certification, the county and the team committed to a design that sought to improve occupants’ well-being, including increased ventilation, better lighting and green cleaning strategies.