Located in the World War I-era National Guard Armory on the campus of Drexel University, the 76,000-sq-ft squash center brings the sport’s energy and activity front and center beneath the building’s distinctive arched roof trusses. The project team needed to channel some of that energy to tackle a host of challenges associated with renovating the historic structure for its new use. After interior demolition was completed, a building-wide laser scan revealed a 2-ft discrepancy between as-builts and actual conditions. Plans to increase basement ceiling heights were complicated by existing footers that were exposed after removal of the basement slab. To make the most of the limited ceiling heights, the project team redesigned most of the overhead mechanical sheet metal and piping prior to fabrication. 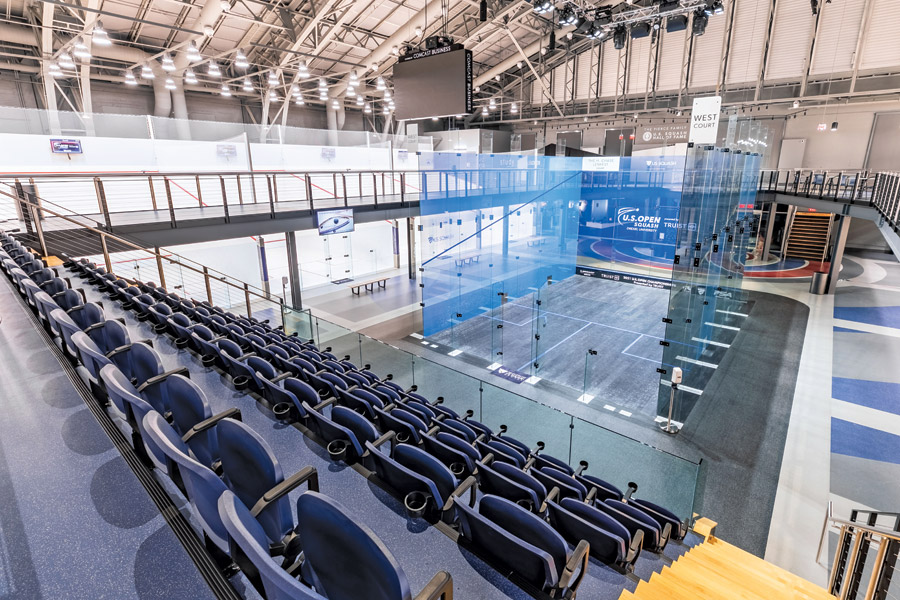 Squash court vendors also assisted with MEP coordination as system elements were located directly behind the courts. Because some of the courts use large panelized systems prefabricated in Germany, vendors laid out the dimensions on site to help plan the building’s layout. This enabled the project team to maximize space for public use.

To ensure the existing structural system could support the weight of a wrap-around mezzanine structure above the new courts, the project team excavated each structural column up to 15 ft deep to remove unsuitable soils.

During excavation, the team also found remains of an old cobblestone road as well as rainwater leaders that had corroded beyond repair and that required replacement to safeguard the new squash courts.

Lighting was a key element to ensure visibility while the players compete and to highlight the existing roof truss structure. Because the unique system was only partially designed when construction began, collaboration with the trade contractor ensured that the underground conduit would accommodate the lighting and audio visual controls system when design was completed. 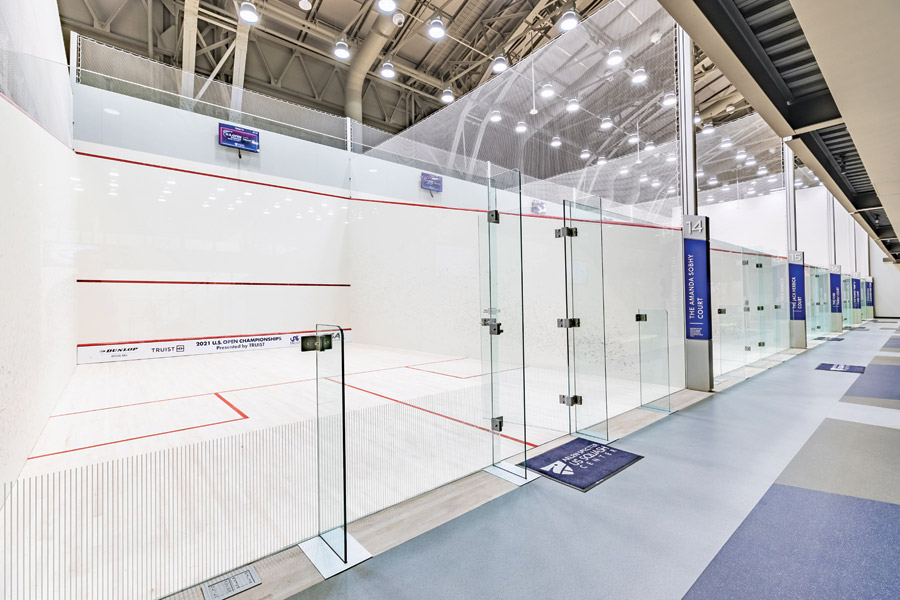 Pandemic-related material delays required a rapid resequencing of plans to install truss-mounted LED lighting prior to suspending lighting grids above the courts.

The completed project features 20 squash courts, two of which are glass-enclosed and equipped with bleachers for feature matches; two blue-walled, maple North American hardball doubles courts; a three-court pod that can be converted into international doubles courts or entertainment space; and 13 standard singles courts. Other spaces include locker rooms, a retail shop, lounge, learning center and office space. The new HVAC system seamlessly blends into the structure, while eight large video screens enable visitors to watch matches from virtually anywhere in the building.

While the project had a 4.15 OSHA recordable incident rate during nearly 145,00 worker-hours with no lost-time accidents, the team learned from the incidents. For example, a flooring contractor hurt his back reaching for materials. The worker was put on “light duty” and the subcontractor changed its workflow to keep materials in front of their workers to eliminate twisting and turning injuries.