With an eye toward sustainability, the $42-million Anderson-Ball Classroom Building, designed by Kirksey Architects, adds a striking new mass timber structure to the San Jacinto College campus in Houston. And at 122,000 sq ft, builder Tellepsen touts it as the largest instructional building built of mass timber in the nation.

Delivering a large-scale timber structure came with both big benefits and considerable challenges. Due to the nature of mass timber, the team was able to reuse a substantial amount of the existing building foundations. With a lack of accurate as-built drawings, and many unforeseen conditions, the team worked closely to find solutions to existing foundation issues that were encountered almost daily.

The design specified black spruce sourced from Canada, which was shipped via rail to a local yard for just-in-time delivery. Penetrations in the structure for utilities could not be made in the field without substantial costs and time delays. All but a few of the penetrations needed to be fabricated into the structure in Canada before shipping. 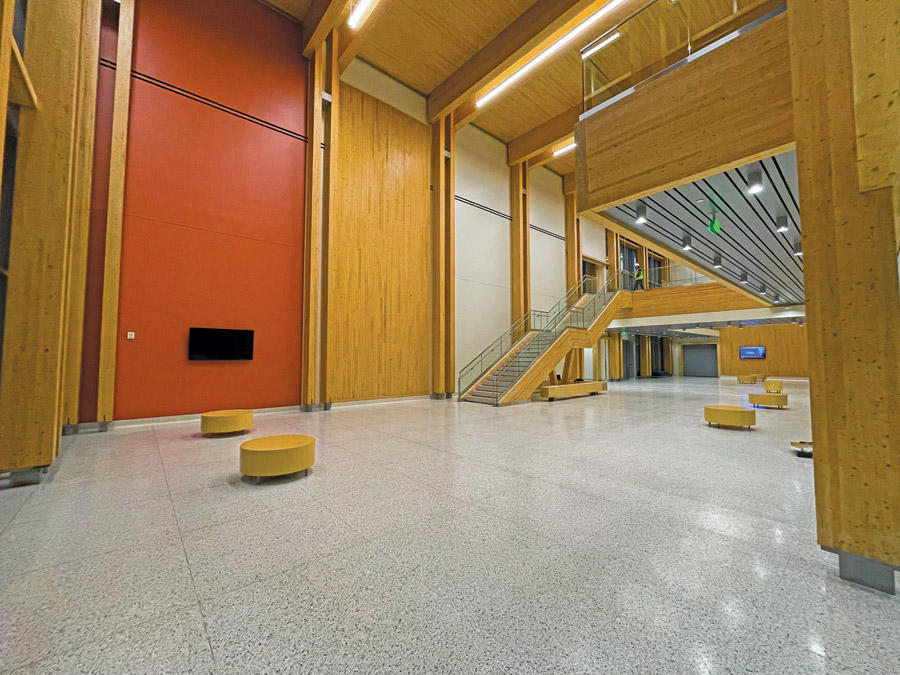 Subcontractors had to locate and accurately size all utilities and penetrations virtually, prior to fabrication. The team was able to successfully coordinate and install the entire structure without a single conduit, pipe, wire or device located somewhere it was not planned.

In keeping with the renewable aspect and reduced carbon emissions of a mass timber structure, the building also includes multiple technologies that create a much more sustainable, state-of-the-art facility. Electrochromic glass reduces the building’s peak cooling needs by an estimated 17 tons from baseline. Tubular daylighting devices were incorporated into the faculty support areas and used in lieu of traditional light fixtures during daylight hours to further reduce the building’s energy consumption.

A water reclamation system was also incorporated to capture building gray water and storm runoff from the parking lots to be used as make-up water for the campus hydronic cooling system. Solar panels take up the majority of the roof, producing up to 300,000 watts for the building. Additionally, solar-powered robotic lawn mowers were installed to mow surrounding turf areas. Advanced lighting controls were incorporated into the facility that not only optimize energy usage but also provide real time data for numerous other applications, such as occupancy for heating, cooling and janitorial needs. 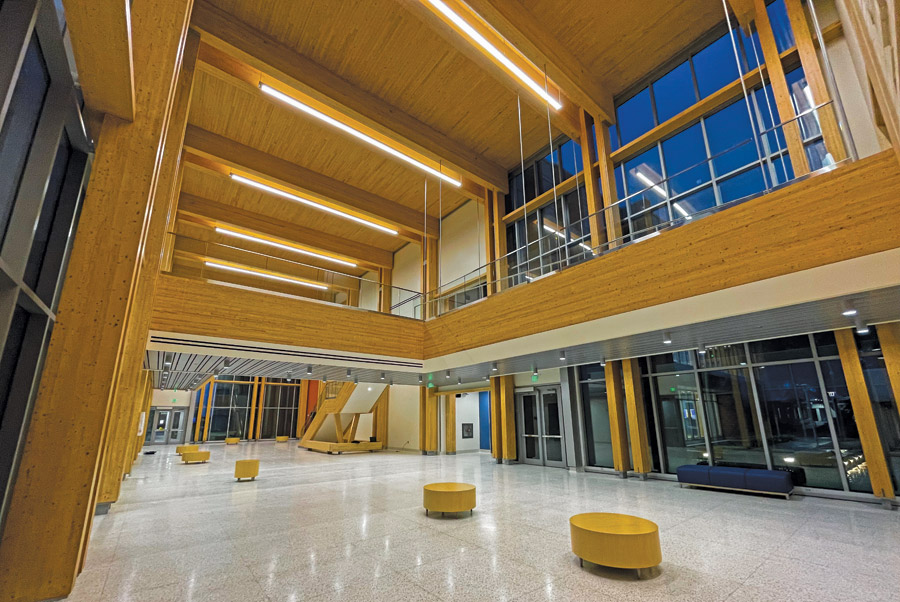 Crews were able to erect the entire structure in 14 weeks with a single crane and a crew of six erectors. Reducing crew size and work hours resulted in a safer and cleaner working environment, according to Tellepsen. The contractor reported an OSHA incident rate of 0.74 and no lost-time accidents over 268,781 worker-hours.

The project, which broke ground in May 2020, was completed on time and below budget in January 2022.