Driving husband John to work in the 1980s at the Long Island insulation company he owned, Karen Grando would listen as he often ignored cellphone calls offering asbestos removal work. “He had mixed asbestos cement as a child, knew it was bad for you and really wasn’t interested in it,” she says.

But after leaving her Citicorp management job, Grando returned to school to gain an asbestos handler’s license and launched an environmental remediation services firm in 1987 to remove asbestos and other hazardous materials. After her husband became ill in 1998, she also began running his company.

When he died about a decade later, Grando merged the two firms—becoming president and CEO of International Asbestos Removal Inc. in Babylon, N.Y. Through acquisition of a Boston company in 2019 and a southern New Jersey firm in 2021, IAR has expanded and diversified its work. The Women’s Business Enterprise-certified firm now has more than 300 staff and field employees in five offices in New York, New Jersey and Massachusetts.

IAR has worked on many high-profile projects, including the renovation of Madison Square Garden and Yankee Stadium in New York City and continues to compete for many of the largest insulation and environmental projects in the region. About 70% of IAR sales are generated by HVAC and plumbing insulation work for mechanical and plumbing contractors. Environmental remediation in New York and New Jersey makes up 25% of revenue, with the remaining 5% from demolition and excavation.

For its growth trajectory in a challenging marketplace, ENR New York has named IAR Inc. as its 2022 Specialty Contractor of the Year. “What sets us apart is that after years of being in business, we really have great infrastructure and experience,” Grando says.

Jamaica Armory: The firm’s remediation and insulation divisions are working on the 240,000 sq-ft Jamaica Armory project in Queens, N.Y, that will modernize and expand the facility—built in 1936—for the New York Army National Guard. The project, managed by Suffolk Construction, will include a 40,000-sq-ft addition, replacement of outdated mechanical and security systems and installation of a new roofing system. Contracts totaled $7.5 million for environmental remediation and insulation.

550 Washington St. ‘Googleplex’: IAR has more than $5 million in awarded contracts on the project to transform the former St. John’s freight terminal and two other Hudson Street buildings in Manhattan into an estimated 1.7-million-sq-ft New York City corporate hub for tech giant Google that will become part of the Hudson Yards complex. It is set for completion in mid-2023.

Terminal A at Newark Airport: IAR is wrapping up insulation work for Newark Liberty International Airport’s Terminal A in Newark, N.J., where it has been serving as HVAC insulation contractor since August 2019.

Among the high-profile projects on which IAR is a subcontractor (see box above) is the $85-million upgrade of Jamaica Armory in Queens, N.Y., set to transform the 86-year-old building used by the New York Army National Guard into an enlarged and modernized 240,000-sq-ft facility. Workers have removed the entire roof and are upgrading mechanical systems.

IAR has also worked in every building of the large Hudson Yards residential-office-commercial complex in midtown Manhattan—including, as of last year, the planned transformation of the old St. John’s freight terminal and two other West Side buildings into a major new office hub for technology firm Google.

In New Jersey, IAR is wrapping up work at Newark Liberty International Airport, where it has served as HVAC insulation contractor. It also provided mold remediation and insulation for the recently completed American Dream Mall, a 3-million-sq-ft retail and entertainment complex in East Rutherford, N.J. In Boston, the contractor provided insulation for facilities of pharmaceutical manufacturers Moderna Labs and Bristol Meyers and for the just completed MGM Music Hall at Fenway entertainment venue. 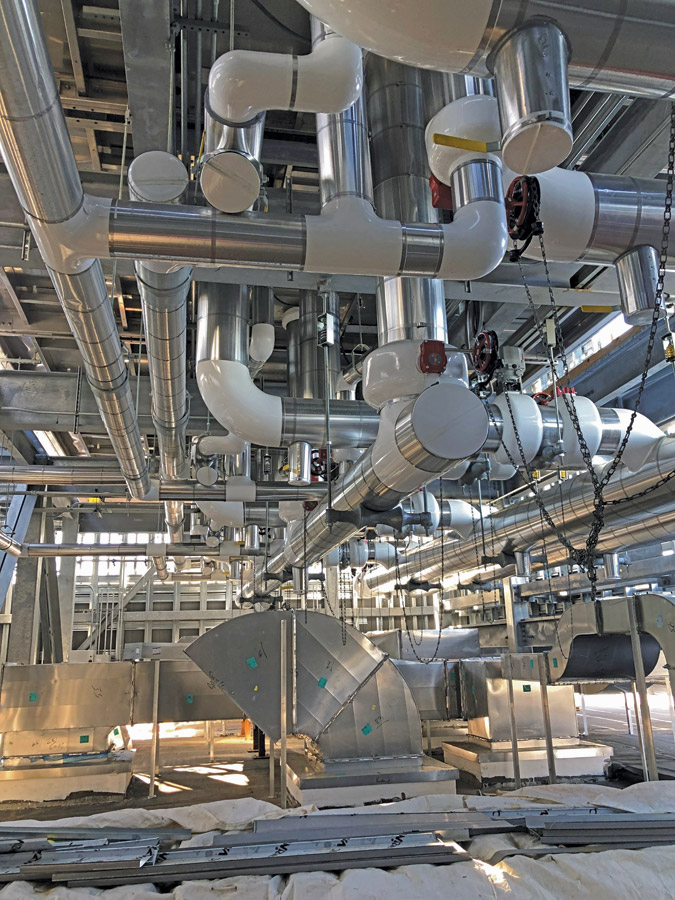 Noting the complexities of running a growing construction firm in today’s business environment, Grando says her mission requires “an entire office staff to keep up.” Smaller firms that can’t manage the paperwork won’t get paid, she says. “If you can’t keep up with the reporting requirements, you’re dead in the water!”

“What sets us apart is that, after years of being in business, we really have a great infrastructure and experience.”
—Karen Grando, President & CEO, IAR

Safety is also a top priority for IAR, with safety manager Mike Picciano visiting sites when incidents occur and supervising needed worker training. IAR also works directly with a training company to be sure all employees are up to date on required safety licenses and certification, unlike in the past when contractors were “ripping and running and doing things illegally,” says Grando.

“We take advantage of training through the union locals we are signatory to,” she says. IAR monitors the air the workers breathe daily to check on contamination levels, with mandated U.S. Occupational Safety and Health Administration reporting.

“It’s really a controlled process” when performed properly, Grando says. As pandemic effects continue, IAR field workers in full gear have been “more protected than most of the trades who only have masks,” Grando says. 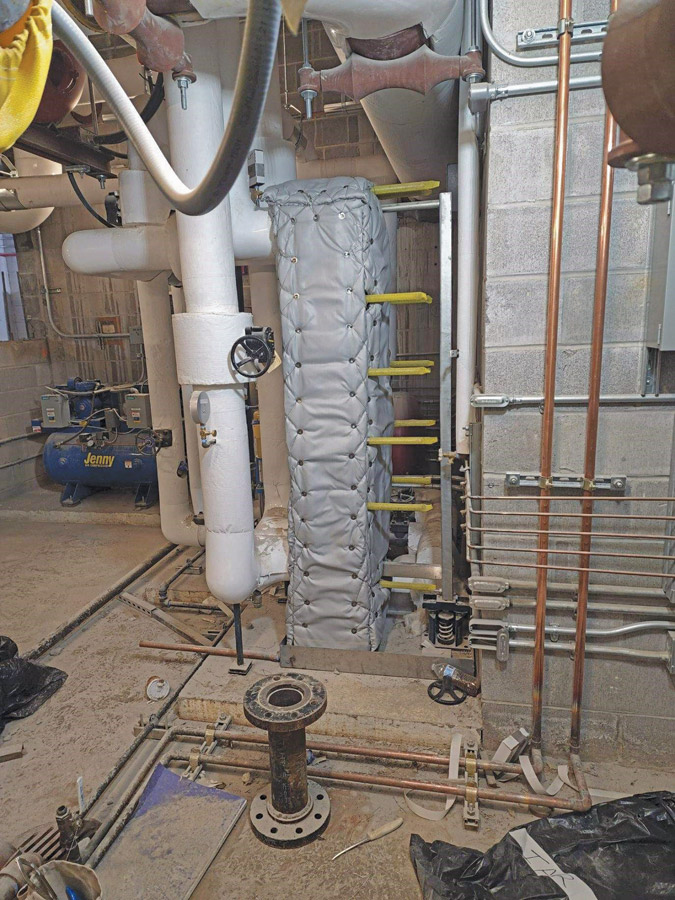 IAR is wrapping up work at Newark Airport, where it has served as HVAC insulation contractor since 2019.
Photo by Sal Farelli, courtesy IAR

IAR’s tight-knit family culture helps it operate as a team. Eight Grando family members are employees, including Karen Grando’s son John Jr., who is its energy services director. Chris Grando, president of IAR’s insulation division, is a nephew hired after college graduation who now is a 35-year firm veteran.

Citing Karen Grando’s “relentless drive,” he says that company employees also “play off each other with great determination. Maintaining that constant drive is what sets us apart.”

“Some players cut corners to make a quick buck—that’s not us.”
—Jason Pastore, Director of Environmental Services, IAR

IAR has performed “every type of job from a strip mall to hospitals and major office buildings—including the World Trade Center complex,” says Jim Smith, chief estimator for P.J. Mechanical, who claims he “can’t find another company with their capability.” He says company staff “are always on point getting to the job ... and completing it even with the most difficult schedules we have run into.”

Customers “know … we will get the job done correctly,” says Jason Pastore, IAR director of environmental services. “Some players cut corners to make a quick buck—that’s not us.” 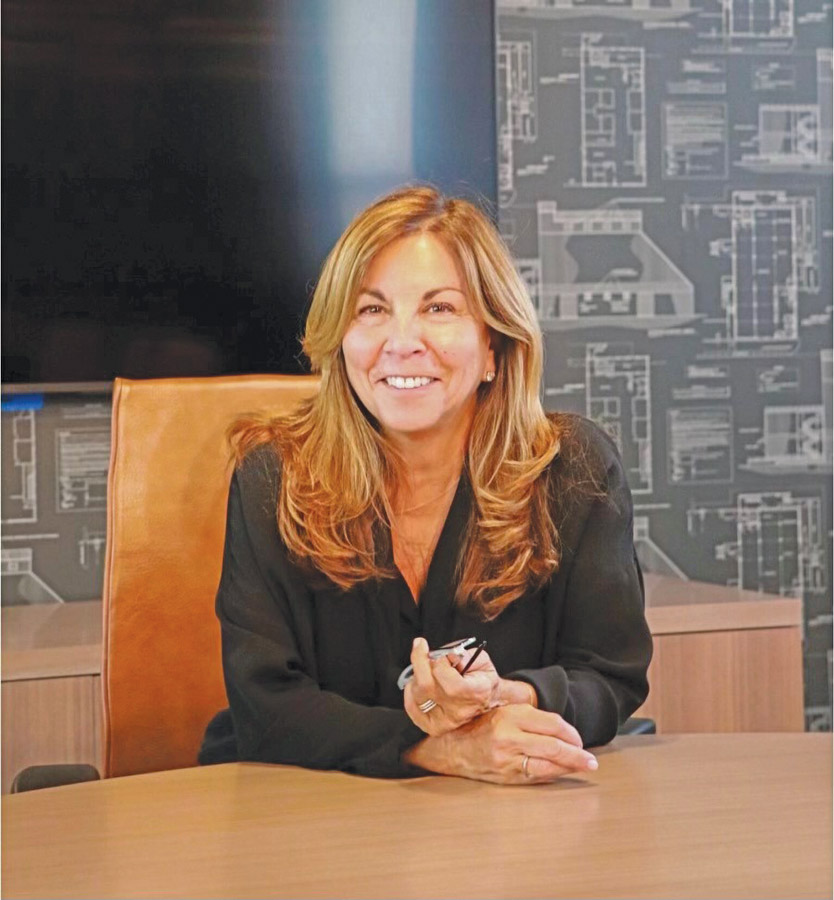 Certification as a women’s business enterprise helps the company pursue and win subcontracting work for general contractors because the number of eligible speciality contractors offering insulation and environmental remediation services is low, Pastore says. “But we still must have a good price,” he emphasizes. “That keeps us as a player.”

Through outreach, IAR supports a variety of charities in its community that benefit local youth groups, hospitals, first responders and the Special Olympics. Karen Grando serves on the board of directors of Northwell Health, a regional health care provider and has also been a board director of The American Heart Association Go Red for Women campaign and of suicide prevention group Solace House. Chris Grando has run the New York City marathon six times for charity and has plans for a seventh run in November. “I believe it is important to use your success to help others whenever possible,” Karen Grando says.

Looking to IAR’s future, she notes that the firm’s environmental division is considering expansion in New Jersey and Boston while its insulation division assesses added Northeast market opportunities. “That’s where we feel there is potential for growth,” Grando says.