Talk about a tight squeeze. The contractor for the $616-million Washington University School of Medicine’s new neuroscience research building in St. Louis was handed a big challenge: fitting the 11-story, 609,000-sq-ft building and parking garage into a relatively small space of 4 acres.

And that wasn’t the only hurdle that McCarthy Building Cos. and the university faced. Another, bigger challenge was to construct the building’s structure in a way that prevents exterior vibrations from affecting the facility’s neuroscience research center and delicate instruments used in the study of such diseases as Alzheimer’s and Parkinson’s. 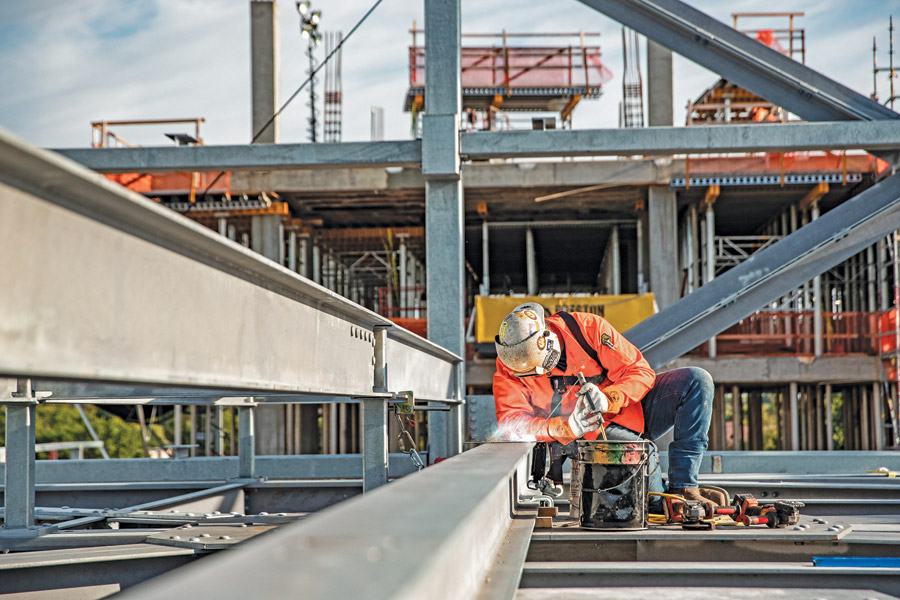 Ninety-five percent of the 609,000-sq-ft building was fabricated off site.
Photo Courtesy of McCarthy Building Cos. 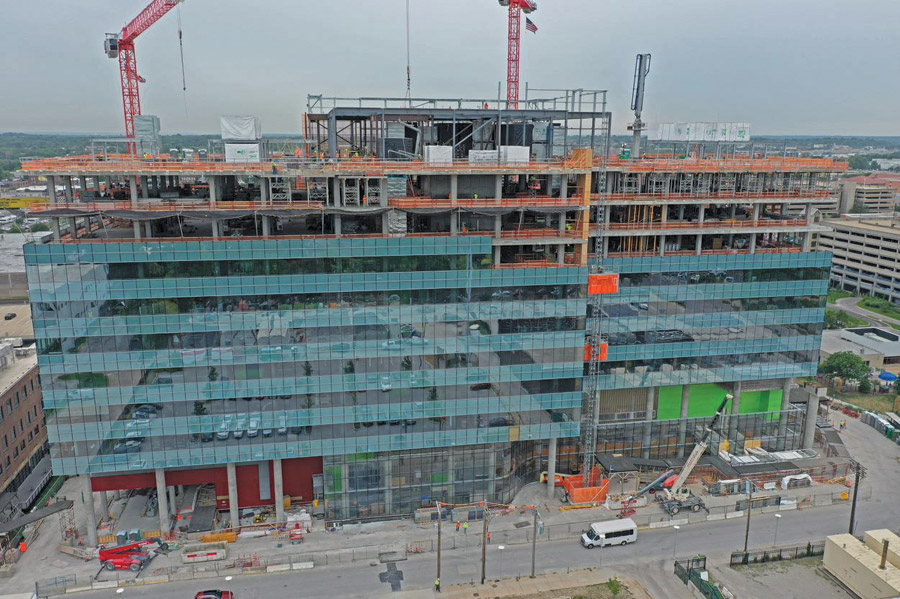 The research facility will bring together 96 research teams and nearly 800 employees from various fields who will study the body’s nervous system. In addition, space in the building can be built out in the future for another 40 research teams.

To give an idea of the scope of the project, McCarthy reports that the building is using enough steel to stretch 2,125 miles, enough drywall to cover 31 football fields, sufficient concrete to fill 16 Olympic-size swimming pools, more than 6,700 tons of rebar and post-tensioning cables, 511 miles of electrical wire and 300,000 ft of mechanical, utility and plumbing piping.

McCarthy began construction in March 2020 and is on target to enable occupancy by summer 2023.

“We took trade hours off site. We put them in a shop a few miles away and pre-fabricated most of the large components there.”
—Andy Poirot, Vice President, McCarthy Building Cos.

“The project is complex in a lot of different ways,” says Steven Sobo, executive director, strategic projects for the school of medicine. “The logistics of it are one challenge that comes to mind—the site is very tight.”

The building is being constructed on a square-shaped site within the 200-acre Cortex Innovation Community—a business, innovation and technology hub—and is bounded by Metro Transit light rail tracks on the south, another building on the east, Duncan Avenue on the north and Newstead Avenue to the west.

To address the challenge of the limited space, and to deal with the complexity of the mechanical, electrical, plumbing and fire protection systems, McCarthy and the school of medicine prefabricated 90% of these elements in local warehouses.

“We took trade hours off site,” says Andy Poirot, vice president at McCarthy. “We put them in a shop a few miles away and prefabricated most of the large components there.” 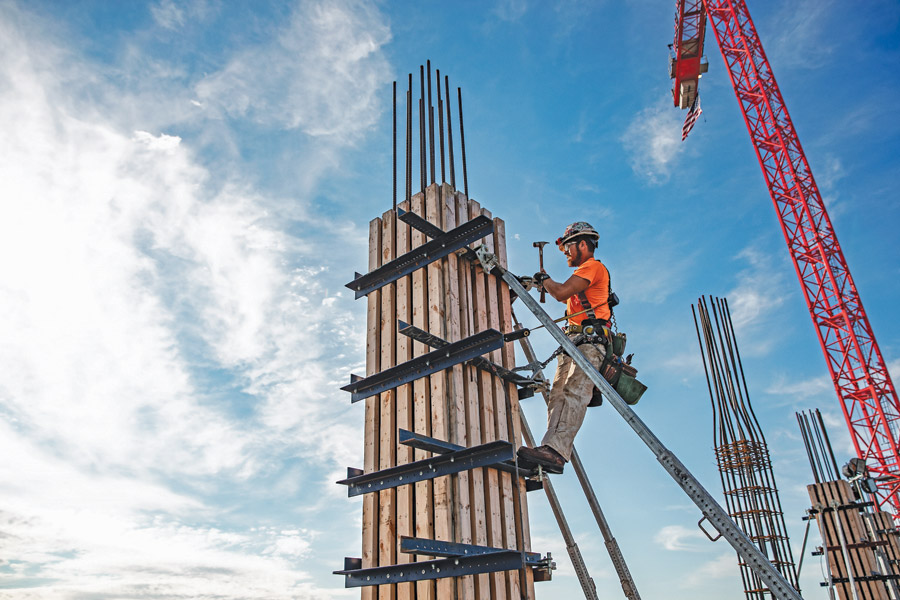 The project employed up to 450 people at its busiest moments.
Photo Courtesy of McCarthy Building Cos.

Major systems that were built and pretested in the warehouse include hydronic pump skids, large main distribution pipe racks, floor-level pipe mains, all duct mains, branch lines and air valve assemblies, along with multitrade racks with hydronic piping, domestic water, electrical distribution and lab gasses. Items were then placed on skids and shipped at strategic intervals to ensure timely installation.

Constructing these systems off site reduced the amount of labor needed overall on the project, which, at its height in 2022, required 450 employees.

“We brought those elements on site and hoisted them into place as full units rather than having to build everything in the field, which would have added more labor hours than we had time for,” Sobo says.

Because it limited workers in the field, prefabrication off site also contributed to safety, especially at the start of the COVID-19 pandemic, Sobo says. 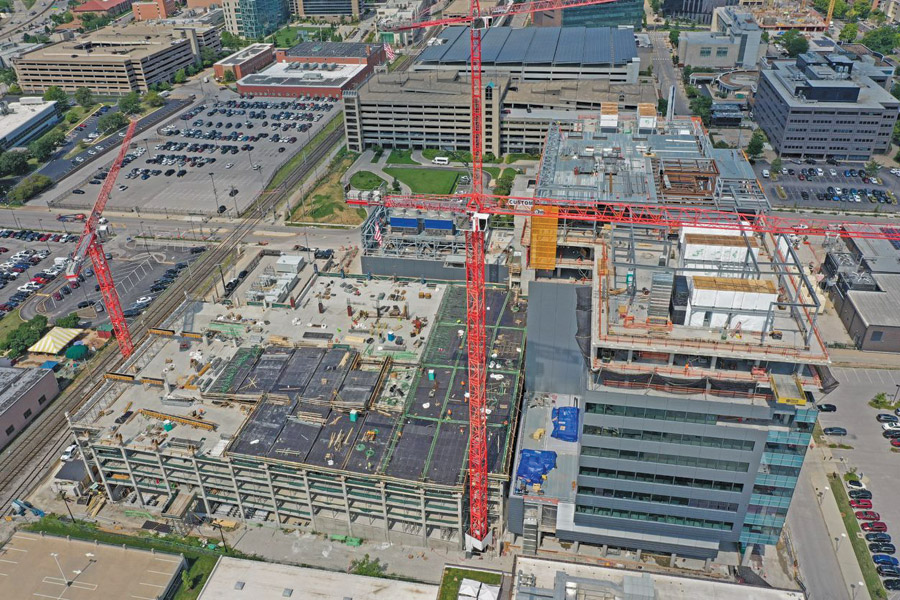 Large leave-outs in multiple locations were planned so that prefabricated components could be moved into the building.
Photo Courtesy of McCarthy Building Cos.

“Doing prefab in a conditioned environment in a warehouse also enables you to have better quality control,” Poirot adds.

Another prefabricated element is the structure’s unitized curtain wall system, which has 57,142 sq ft of high-performance, low-E-coated vision glass and custom color spandrel glass. It also features 15,454 sq ft of an ultraclear, low-iron glass for a three-story-high lobby wall. The facade was erected at night on a second shift with limited crews available.

“The evening delivery and installation of the unitized system was necessary as the tower cranes were utilized during the day to facilitate the structural concrete frame construction,” Poirot says.

Engaging specialty contractors early in the process and thinking ahead is crucial to successful prefabrication. Poirot says using design assist, in which the construction team collaborates with the architect and engineer during the design phase, was beneficial. 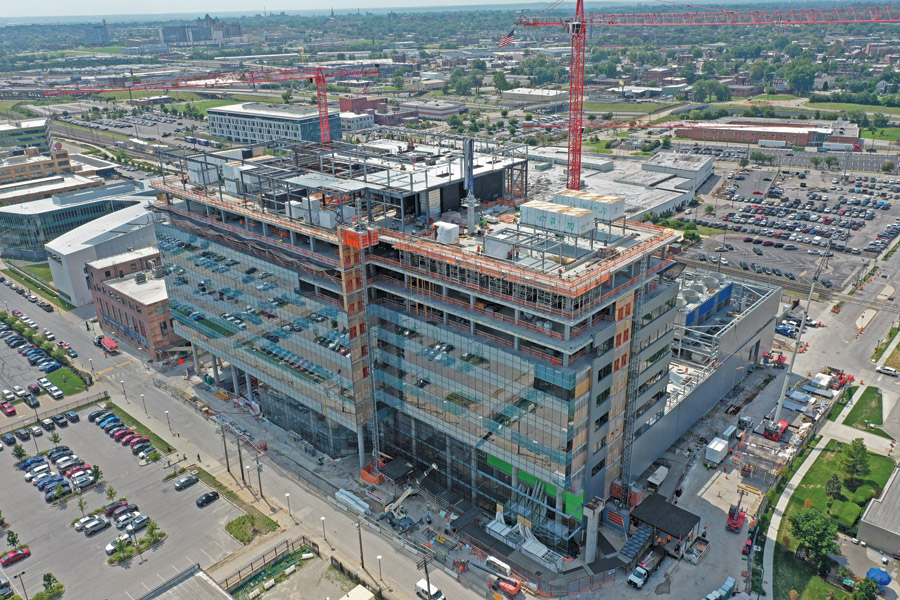 The project includes a separate utility plant to minimize vibrations that could affect instrumentation inside the neuroscience research building.
Photo Courtesy of McCarthy Building Cos.

Preplanning for the project began in 2015 and included developing a strategic plan, geotechnical surveying and site assessments and determining the project’s costs, scope and timeline.

“The most important thing is to plan early and to be forward-thinking in your planning process,” Poirot says. “You need to have trade partners engaged in the design process so that the building is designed in a way that lends itself to prefabrication. You can prefab a 20-ft or 30-ft-long pipe rack, but if you don’t have a way to get them into the building, it’s not going to work.

“We planned for significant leave-outs in multiple locations so we had a way to get the very large prefabricated components onto floors before we closed them up,” he says.

“It needs to have minimal vibration, not only from a seismic perspective, but to prevent vibration of instru-mentation that will be in the building.”
—Steven Sobo, Executive Director of Strategic Projects, Washington University School of Medicine

Even smaller elements, such as electrical hangers, were precut off site.

“The electrical contractor put carts together with everything they needed to install in an area, with drawings showing what goes where—hangers, struts and other items they needed to complete the space,” Poirot says.

Poirot adds that prefabrication required extensive 3D modeling of the project, which enabled all parties to understand the spatial constraints and generate fabrication drawings to be followed in the shop.

Another challenge that the contractor and school faced relates to the building’s function. 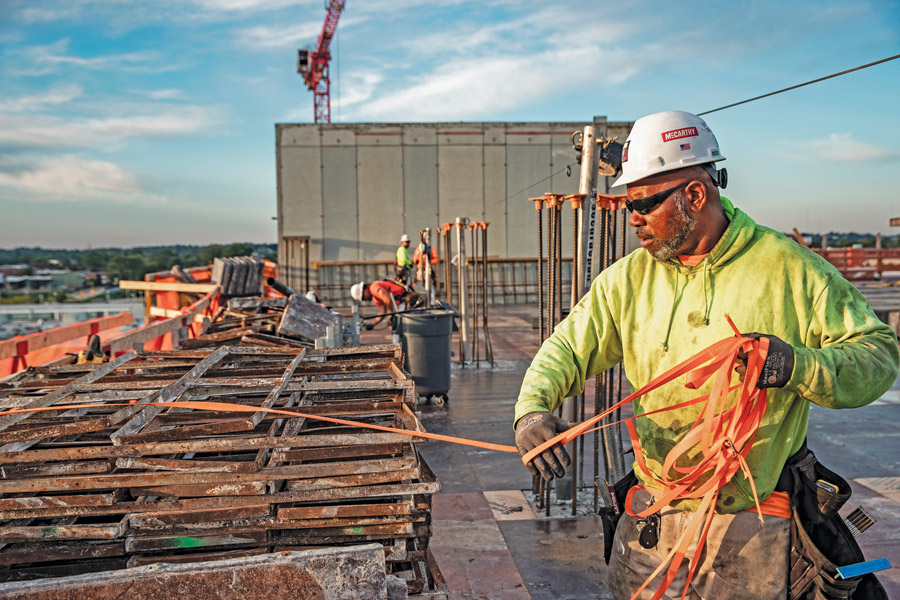 Electrical components were fabricated off site and then put on carts for installation in the field.
Photo Courtesy of McCarthy Building Cos.

“It needs to have minimal vibration, not only from a seismic perspective, but to prevent vibration of instrumentation that will be in the building,” Sobo says.

The team removed mechanical systems, including anything that vibrates or has a frequency to it, such as a cooling tower that could affect instrumentation, and put them in a different structure.

“We built a separate utility plant for those pieces of equipment, which is different from what we usually do,” Sobo says. “The chillers, electrical systems and generators are in a separate building to the south of the main building.”

Kurt Bloch, an associate with the CannonDesign of St. Louis, says the building was designed in adherence with the local code under the 2018 International Building Code and ASCE 7-16 design standard that provides seismic design guidelines that incorporate the known faults as well as background seismicity data that assumes a 5.0 earthquake can occur anywhere.

“Furthermore, we coordinated with the geotechnical engineer to gain a complete understanding of the site which helped reduce the seismic design requirements due to the quality and elevation of rock,” he says. Workers participate in a morning stretch and flex to help reduce injuries in the field.
Photo Courtesy of McCarthy Building Cos.

The project includes a 1,846-space parking garage and a 360-ft-long pedestrian link connecting the research building with the rest of the medical campus.

“The labor market is stretched thin with all the work going on in St. Louis, and it has been difficult to find experienced and reliable workers,” Schaal says.

Tarlton recruited several apprentices and paired them with experienced mentors on the crew.

“Most of these apprentices have never been on a construction site before, let alone a project of this magnitude,” Schaal says. “So we have focused on providing them with proper training to complete their tasks safely and efficiently.”