In the jobsite trailer for the $121-million renovation and expansion of the University of Virginia’s Alderman Library, Skanska project executive John Calvin points to copies of 1937 construction photos showing the 100,000-sq-ft horseshoe-shaped structure being carved into a hillside below the school’s historic Rotunda and Academical Village. Project team members—including Skanska, the construction manager at-risk, and other key firms—are in the midst of a complex, four-year multipart effort. It includes modernizing the 85-year-old building and clearing a 107,000-sq-ft, late-1960s infill structure to make way for a five-story, 130,000-sq-ft cast-in-place expansion, all racing toward a targeted completion date in fall 2023.

Calvin marvels how his team has routinely made the most of BIM, laser scanning and other high-tech tools that would have been unimaginable to his Depression-era predecessors.

“It’s definitely a paradigm shift,” Calvin says with a laugh. “That [earlier] general contractor would be amazed.” 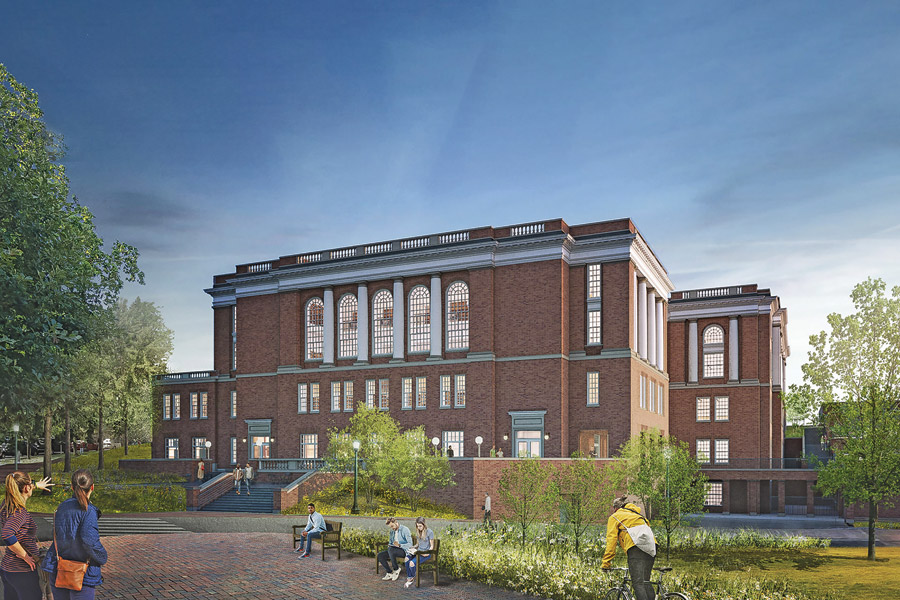 The library is located on a busy corner just a stone’s throw from 19th-century landmarks designated as a UNESCO World Heritage Site.
Rendering by HBRA Architects, courtesy Skanska

That contractor might also be impressed with the multiple challenges the team has faced in what UVA senior project manager Kit Meyer calls “a tender renovation” that will take place at the same time as demolition and new construction.

What’s more, the work is located on a busy Charlottesville corner just a stone’s throw from the university’s 19th Century Rotunda and Academical Village that UNESCO has designated a World Heritage Site. At the outset, Meyer explains, the renovation plan called for keeping the library open while the project unfolded in phases. “Skanska came back and told us that really wasn’t economically or logistically feasible,” she says. Convincing university officials to empty the library of its 1.5 million books for four years of construction wasn’t easy, Meyer says, but adds, “We had to approach this as a single project.”

One of those considerations was the need to implement a full-scale seismic upgrade for the original building constructed of 18-in.-thick concrete-encased steel beams with load-bearing masonry infill while also preserving its distinct architectural integrity.

“We were tasked to keep historic spaces as they were on opening day in the 1930s,” explains Bill Kinane, a principal with HBRA Architects of Chicago, which teamed with Clark Nexen of Virginia Beach, Va., to lead the design work. Kinane says, “Making sure we could accommodate that structurally without impacting the original architecture was the biggest challenge.” 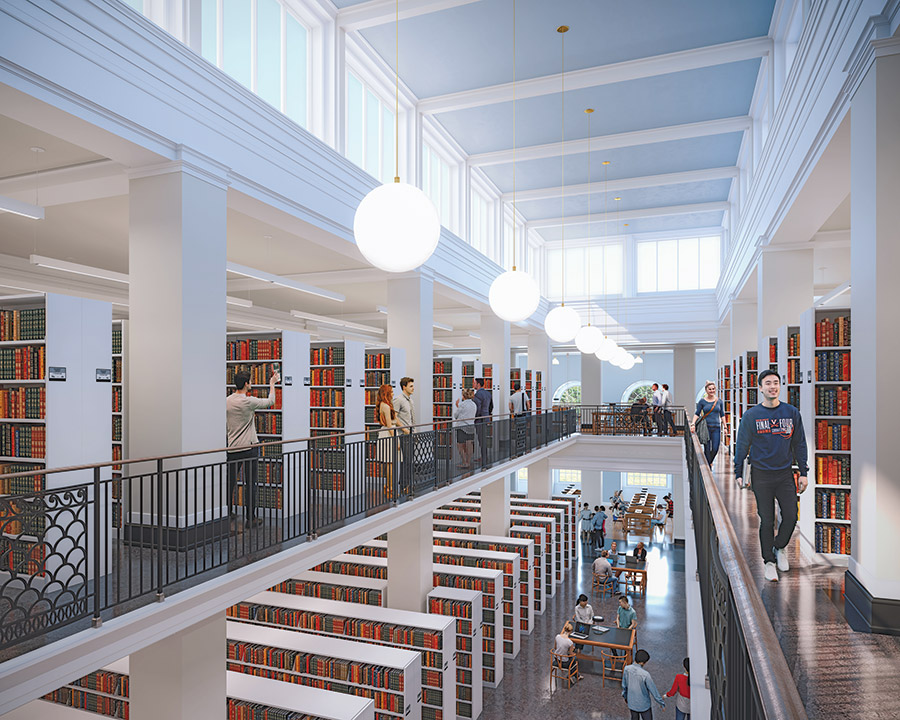 Along with additional shelves for library volumes, the addition will contain a café, new ground-level entrances, offices, support space and a double-height reading room on the fourth floor.
Rendering by HBRA Architects, courtesy Skanska

He credits structural engineering consultant Silman for balancing those disparate needs with a strategy that included adding a 125-ft-wide, reinforced concrete shear wall, drag struts to transfer lateral loads via the floor slabs and clips to tie the masonry infill to the building’s steel structural frame.

Installing the shear wall proved to be an adventure. To access foundations in the sub-basement level—nicknamed the Dirt Room because it was mostly occupied by the original hillside slope—Skanska crews had to lower personnel and equipment, including a mini-excavator, through a 20-ft by 120-ft hole cut into the second-floor slab. After clearing away a narrow work area and demolishing concrete masonry unit walls, crews installed the shear wall’s grade beams, mats and anchors.

“At the same time, we’re also installing shoring and bracing for the original building, and keeping the dirt from sliding back in,” adds Chris Rhodes, Skanska senior project manager.

As the shear wall began to rise and interior work got underway, Skanska-led crews meticulously demolished the infill structure. The process removed more than 23,000 tons of material, 75% of which was recycled. Left in place was a single full-height 16-in.-thick interior wall to border two new interior study courtyards.

“We decided it would be more efficient from appearance and structural standpoints to keep the wall in place versus demolish and rebuild,” Kinane explains. “It was braced and supported until it could be incorporated into the addition.” 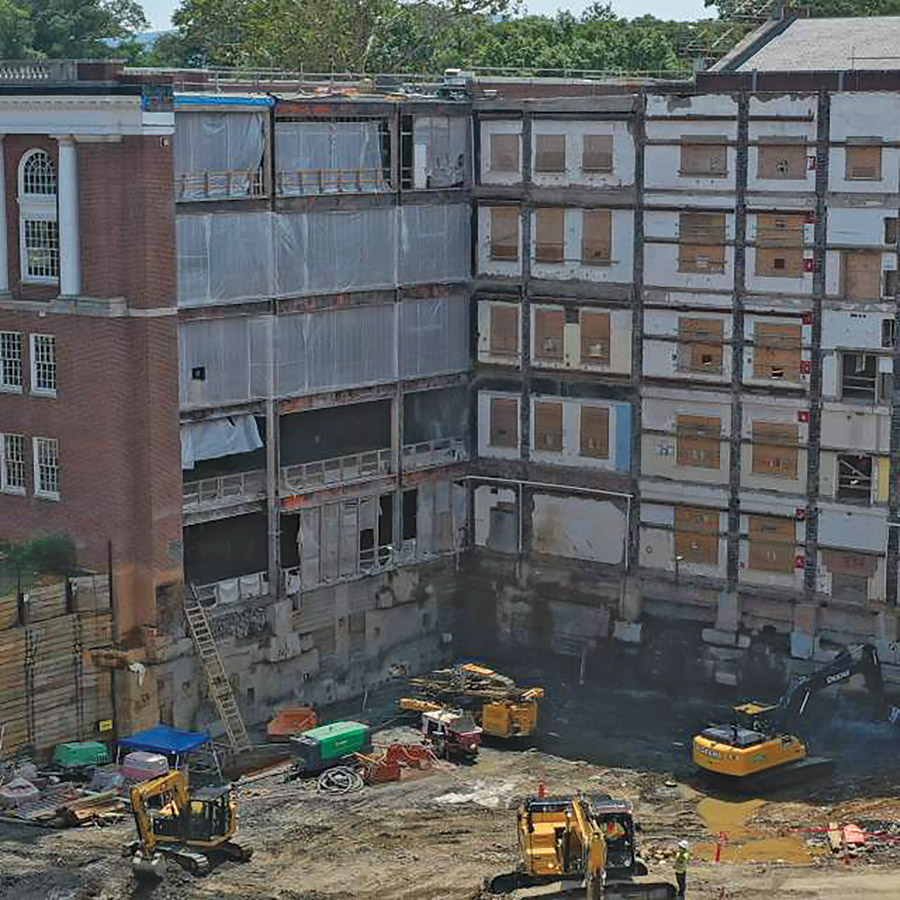 Despite the project team’s many hours of advance research and planning, the Alderman Library didn’t give up all of its secrets. As the start neared for the up to 26-ft-deep excavation for the new addition’s foundation system, the team discovered that a massive layer of hard bluestone rock lay in their path.

The rock wasn’t totally unexpected, Meyer says, citing as-builts and geotechnical reports from the 1960s infill construction. “But that data led us to believe it was much deeper,” she says.

Blasting was out of the question given the proximity of UVA’s landmark buildings. So Skanska decided it would have to dig out more than 6,000 cu yd of rock using chipping hammers and grinding wheels. The excavation also necessitated a new stormwater management system that includes 75,000 gallons of storage capacity in cisterns located beneath an adjacent field.

Meanwhile, the existing library’s interior spaces held surprises of their own, with the occasional discovery of undocumented asbestos. Depending on the renovation and modernization work needed in the various historic rooms, some finishes were left in place while others were dismantled and placed in storage. Existing utilities were gutted to make way for new systems that will serve the entire library.

“We were tasked to keep historic spaces as they were on opening day in the 1930s.”
—Bill Kinane, Principal, HBRA Architects

Meanwhile, the existing library’s interior spaces held surprises of their own, with the occasional discovery of undocumented asbestos. Depending on the renovation and modernization work needed in the various historic rooms, some finishes were left in place while others were dismantled and placed in storage. Existing utilities were gutted to make way for new systems that will serve the entire library.

Routing ductwork, piping and other system conduits proved trickier, however. The goal of restoring as many ceilings as possible to their original 12 ft height left at most only about 18 in. of clearance available between existing beams. Although glass fiber-reinforced gypsum wraps around some of the beams mirror some of the old building’s plaster work, Rhodes says, “We still had to duck and dodge around the deck.” 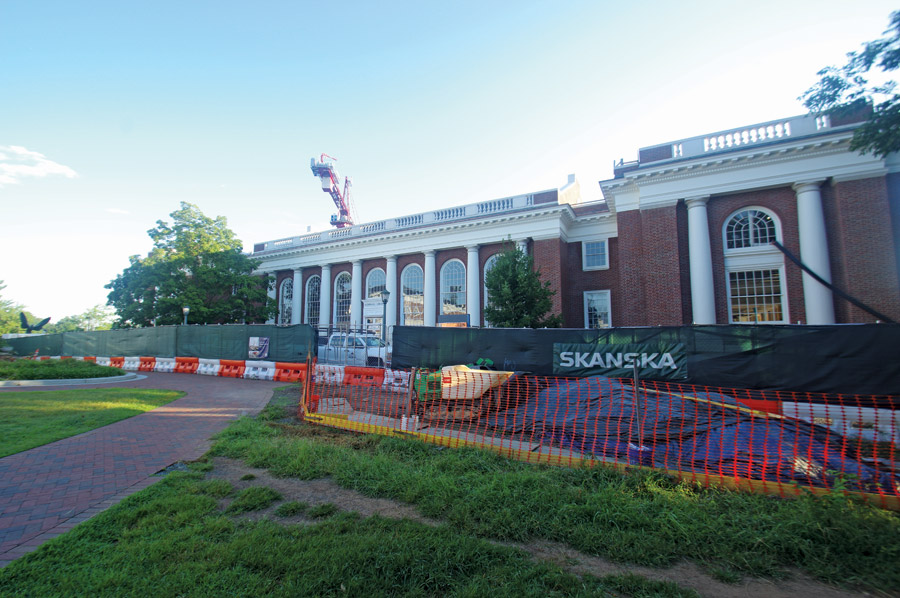 In addition to aiding the library’s pursuit of achieving LEED Gold, the completed system will surpass the university’s own sustainability standards, with an overall energy intensity level 50% of ASHRAE standard for a building of its size. “The library’s utility bill will be cut in half,” Meyer says.

The original building has undergone a full exterior renovation, including repointing, brick and stucco column repairs and restoration of more than 300 windows. New waterproofing supported by more than fifty 25-ft to 40-ft-deep H-piles along its south face will address long-standing leak problems in lower levels.

Even with an extensive underpinning strategy implemented in step with the excavation and other exterior work, Skanska kept close watch on the building’s stability via a system of levels, vibration and seismic monitors and a wireless total station that was checked every hour.

All seemed normal for several weeks during excavation and underpinning work until a reading from the total station indicated the building had shifted by less than a quarter of an inch.

After recalibrating the monitoring system and after field crews backchecked the layout and all monitoring points, it was determined that one of the offsite monitoring prisms had been moved, possibly by a university landscaping crew working in the area at the time. “We could not be sure who moved the prism, but someone or something had bumped the monitoring point and it was recorded by our monitoring plan,” Rhodes says. 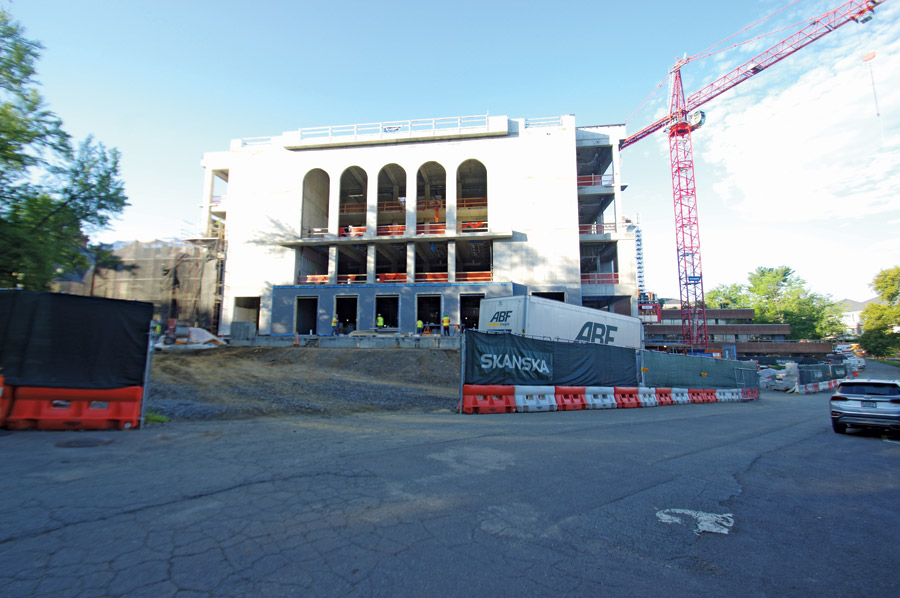 The project’s 130,000-sq-ft cast-in-place expansion is racing toward completion in fall 2023.
Photo by Jeffrey May, courtesy Skanska

A study in space

In sharp contrast to the project’s renovation work, the five-story, cast-in-place addition has progressed with few issues since its rocky start. Begun in mid-August 2021, the new structure is supported by spread footings approximately 2.5 ft deep and four 30-ft by 30-ft, 3-ft-deep mat slabs. The addition topped out in May 2022 with the ceremonial placement of steel clearstory beams.

In three areas, the addition’s 6-in.-thick floor slabs are being augmented with 2-in. topping slabs to accommodate an embedded movable shelving system. Self-leveling compound will be placed at the interface of the new and existing floor slabs to accommodate a slight slope in the original structure. “It’s just one of the little idiosyncrasies we’ve found along the way,” Rhodes says.

Work is now underway on what may be the renovation program’s signature feature: the two study courtyards’ 50-ft by 34-ft, 15,000-lb skylight assemblies that will be installed between the fourth and fifth floors.

“The courtyards will definitely be the ‘wow factor’ providing the library with a unique space it didn’t have before,” Kinane says. At the same time, the 4-ft-high skylights are positioned to preserve a low profile relative to the original library building. “They don’t ‘pop out’ like a more conventional skylight would,” he says.

Along with more shelves for library volumes, the addition will contain a café, new ground-level entrances, offices and support space. It also will have a double-height reading room on the fourth floor to complement the lobby of the 1930s building. Though the library will largely retain its core mission of scholarly research, it also will have the flexibility to accommodate maker space and other evolving services.

“The library’s utility bill will be cut in half.”
—Kit Meyer, Senior Project Manager, UVA

With the addition’s dry-in and window installation underway and masonry work on track for completion by spring, Calvin is hopeful that the final year of construction will be less hectic than the initial period.

“We’ve already worked through the pandemic, through rock excavation, heat waves, torrential downpours, snows—you name it,” he says. An ongoing challenge has been managing supply chain issues, which the team tried to minimize with moderate success through early orders for materials and equipment.

Meyer adds that while the library has been more fortunate than other jobs in terms of procuring materials, “escalation has been a huge challenge.”

Another project goal is to maintain a stellar safety record on and off site. The library’s proximity to busy streets, pedestrian paths and access roads to other university buildings has required a high degree of coordination and management.

“We’ve worked more than 600,000 staff hours without lost-time injuries, and will probably be close to 1 million by the time we’re done,” Calvin says. “We like records like that. We’re also proud to have 45% [minority business enterprise] participation in the project.”

Projects like the Alderman Library don’t come along often, but the experience has provided no shortage of valuable lessons, project officials say. “It’s every project in one,” Kinane says of the multifaceted program. “Even for those of us on the team with a lot of experience, it’s been such a fantastic learning experience.”

Meyer agrees that the success has come from “a three-legged stool” of collaboration among owner, designers and construction team.

If the university had stuck with the original plan to carry out the project in phases, “it would have been an absolute disaster,” she says. “It would have taken 10 years instead of four.”

Meyer adds, “Fortunately, Skanska was involved early and had the expertise to do the analysis for what proved to be a more practical approach.”

Calvin agrees that Skanska’s expertise has been critical, but so has the team’s ability to adapt to whatever new situations each day brings.

“This is a project,” he says, “where you have to be ready to turn on a dime.”