The team building a sportsbook and poker room inside Harrah’s New Orleans was already facing a tight schedule and the constraints of working inside an active casino. Then they opened up the walls and found the built condition did not quite match what they expected. A column line was off by 8 in. and the original structural steel design did not meet the curvature capabilities of a large video screen, necessitating redesign.

But the project team is working hard to make up for lost time. The project is the first interior phase of a $325-million hotel expansion and casino rebranding being done as the property changes from a Harrah’s to a Caesars. The whole renovation is expected to take about three years, says Ryan Worrell, senior director of design and construction at Caesars Entertainment Inc. 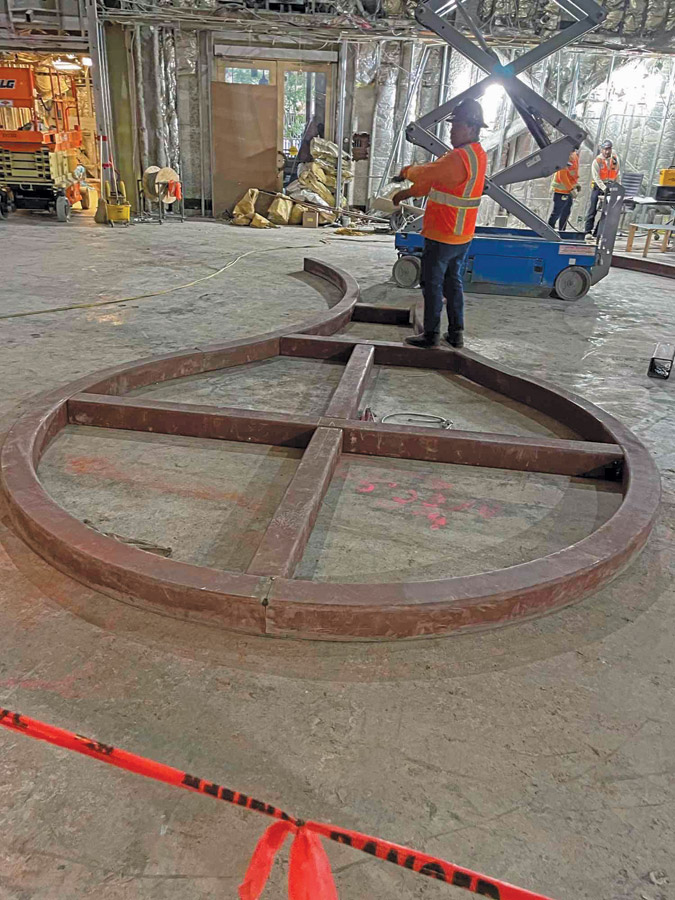 Part of the project needed a redesign after the team found the original structural steel plans would not meet curvature requirements for a large display screen.
Photo courtesy of Ryan Gootee General Contractors

Caesars is aiming for substantial completion around Labor Day weekend. Greg Gritter, project manager for Ryan Gootee, says the contractors started with a half-mobilization March 7, and then fully mobilized into the space April 7 so the casino could keep revenue-producing games there until after the NCAA Men’s Final Four basketball tournament, which was held in New Orleans at the Caesars Superdome.

With the casino still open throughout construction, contractors built a 17-ft-tall, 150-ft-long studs and drywall construction barrier encapsulating the full workspace to keep guests out. It was also insulated to minimize sound transmission through the wall. Harrah’s has used the surface to put up signs, and placed slot machines along the temporary wall.

“It’s mutually beneficial for them and us,” Gritter says.

By working with the structural engineer, the contractor developed a plan to continue work, using pieces that had already been manufactured. The unexpected challenge put them roughly a few days behind schedule. Gritter says that may not seem like much, but on a fast-paced project, every day matters to meeting the schedule. Chad Leibe, senior superintendent at Ryan Gootee, says the project team is catching up. The steel erector worked seven-day work weeks to make up for the lost time in the design coordination. 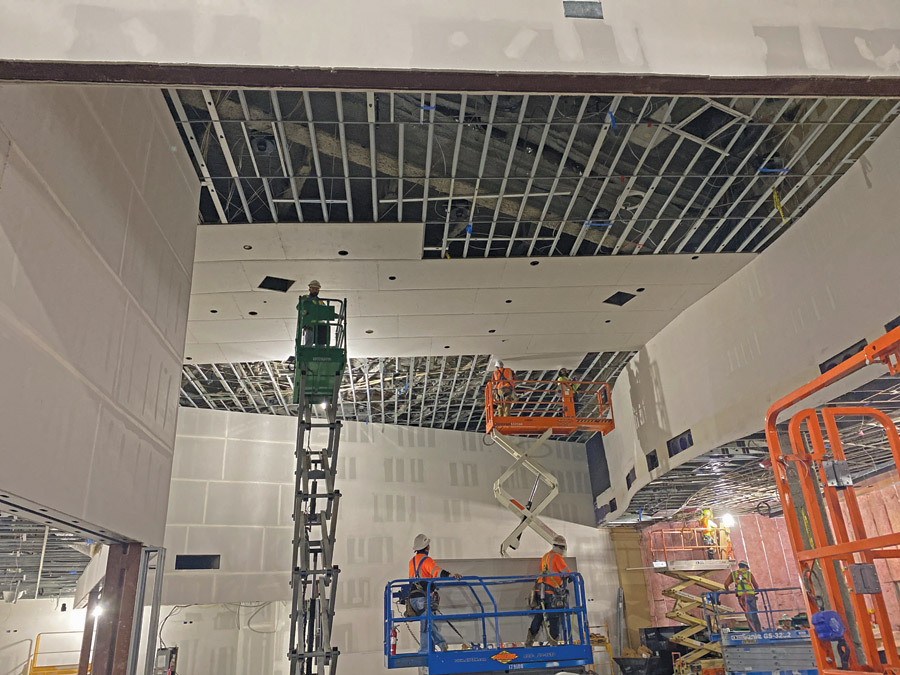 Equipment like lights, sprinkler heads and cameras will be aligned above an aluminum lattice ceiling element with the appearance of wood grain.
Photo courtesy of Ryan Gootee General Contractors

“It’s the team that makes a difference on that,” Leibe says.

The team’s flexibility has also compensated for prevalent ongoing workforce challenges. With 50-60 workers on site every day, Leibe says they’ve been utilizing overtime and “getting creative” with subcontractors. For example, a framer is installing some metal pieces to receive a panel that a mill worker is manufacturing to cover up speaker openings, which is something they may not typically do. Gritter says they’re fortunate to have a good relationship with much of the local subcontractor base.

“That allows us to make certain requests, and as long as they’re willing to work with us on miscellaneous tasks that are found throughout the project, we’ll work together to get things done,” he says.

The 5,000-sq-ft, 20-table poker room will be the largest in Louisiana, according to Caesars. It will be built next to the new sportsbook. 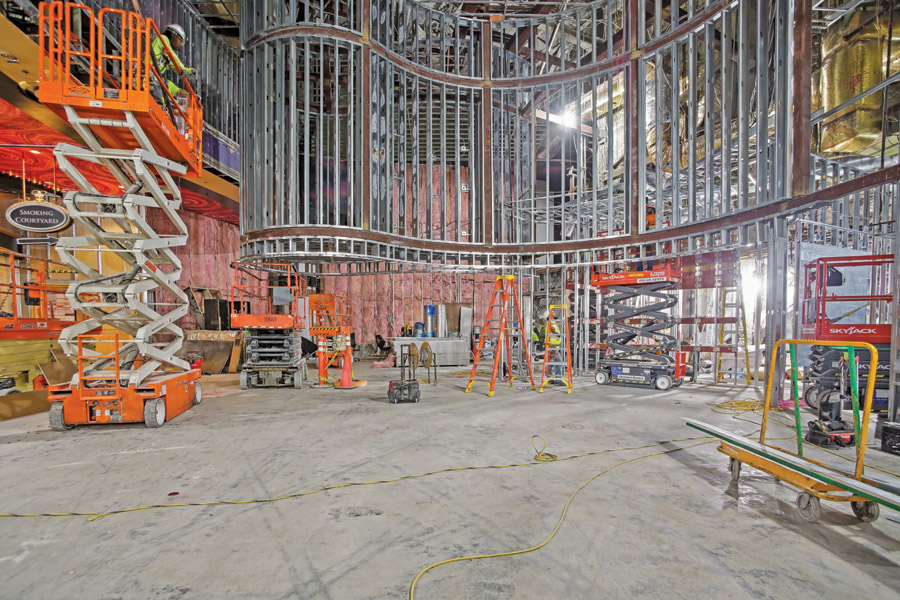 A 147-ft-long video screen will sit flat against one wall and transition into a curved screen that is visible across the sportsbook.
Photo courtesy of Ryan Gootee General Contractors

Harrah’s New Orleans opened a temporary sportsbook in a converted lounge space on Oct. 31, 2021, after Louisiana legalized sports betting. While Worrell says that has worked well, the plan is to transfer everything to the 5,700-sq-ft sportsbook that’s now under construction. The modernized space will feature a new betting counter, a bar, a “fan cave” for private groups and a 17-ft-tall display wall with a 147-ft-long video screen that seamlessly transitions from a flat screen display along one wall to a curved-radius screen display that will be visible from every part of the sportsbook.

Installing that screen is a time-intensive process. It’s made up of 2-ft x 3-ft screen panels that form a mosaic that can display one large image, or show different games in different sections.

“While they can have different segments and different things shown in different areas, it’s going to look like just one gigantic screen,” Leibe says. 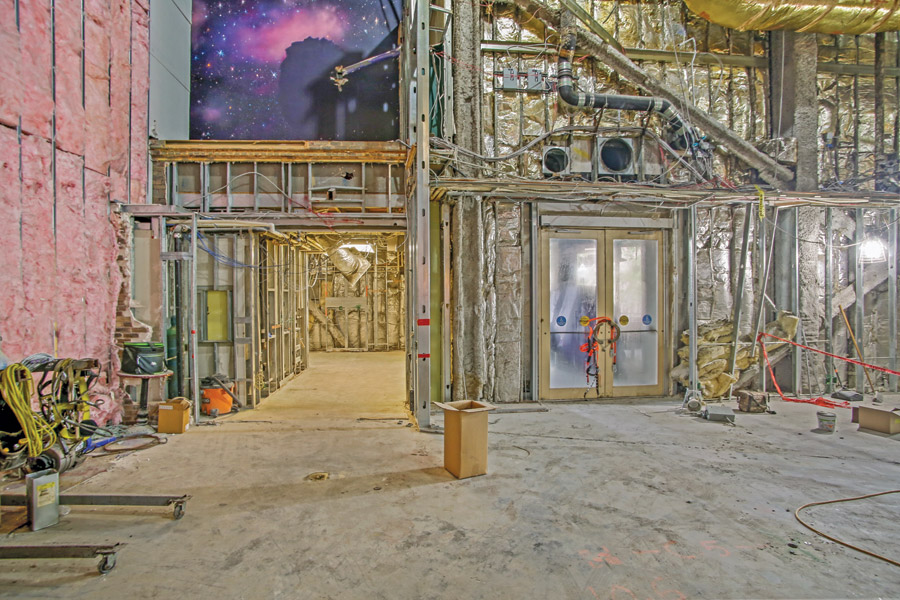 The 5,000-sq-ft poker room will be the largest in Louisiana, and is being built as the property prepares to rebrand from a Harrah’s to a Caesars.
Photo courtesy of Ryan Gootee General Contractors

The panels recently arrived at the site in 47 crates. Each of those individual panels is mounted on a back box containing the electronics, and the boxes are secured with metal studs. Nearly 500 cables will be used to connect it all together, and then they must be funneled together into a closet on the opposite side of the project.

“So we’ve got to strategically build out the space in a way that gets all the rough end cables to the same room without closing it in too quickly,” Gritter says.

That’s not the only piece of the project that has required careful sequencing. To accommodate a 40-ft-long chandelier over the bar, the overhead structure needed to be built first, with the chandelier then installed before crews could place the bar underneath it. 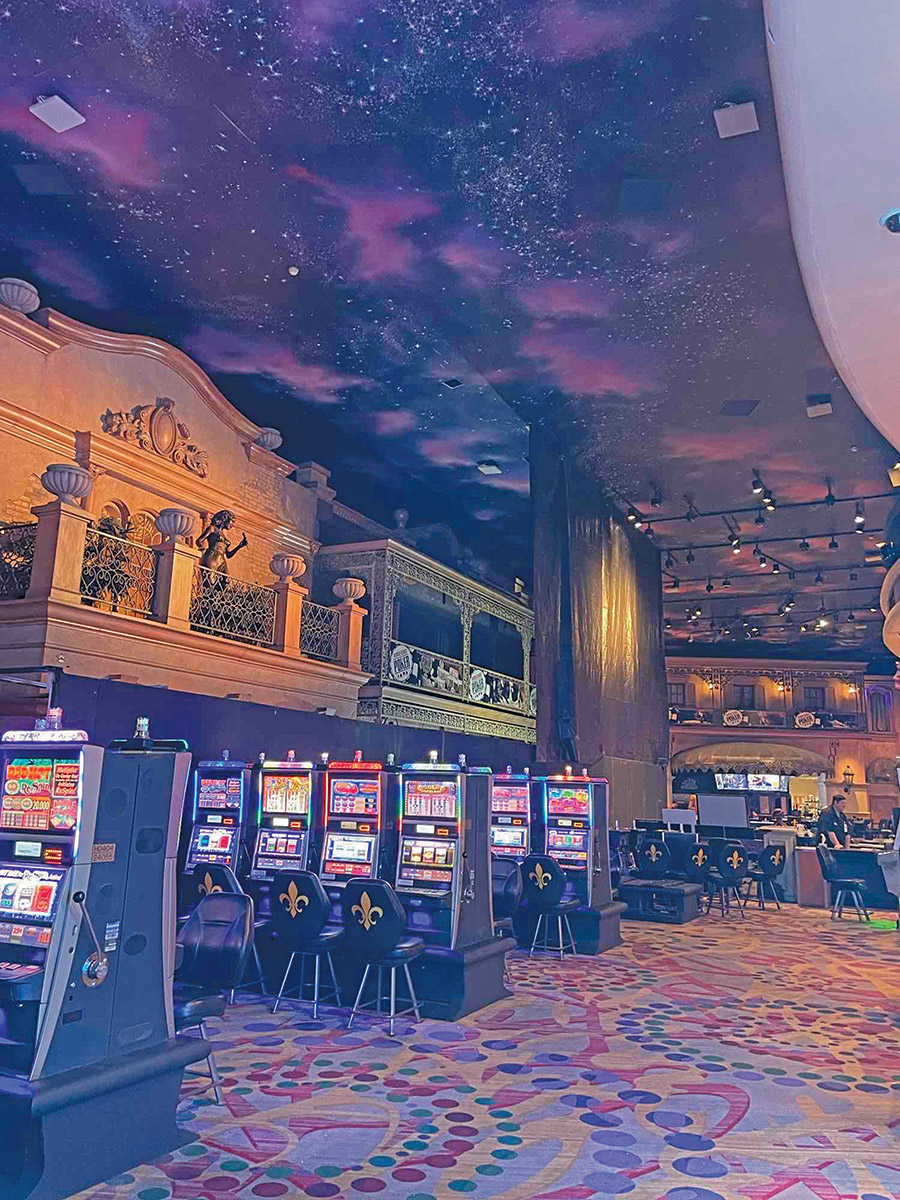 The team also had to plan around delays in receiving a decorative ceiling element because the manufacturer is having trouble getting raw materials. This 80-ft x 40-ft lattice will be made of hollow aluminum beams and given the appearance of a wood grain finish. It will be suspended with wires from the ceiling.

Gritter says the lattice installer used an electronic Hilti layout tool to triangulate on the floor the points for coordination of light fixtures, sprinkler heads and cameras, so they’ll be aligned with the feature once it is installed.

As of late July, Gritter says the project is about 80-85% complete and looking to achieve substantial completion on time.

“We’re on the homestretch right now,” he says.